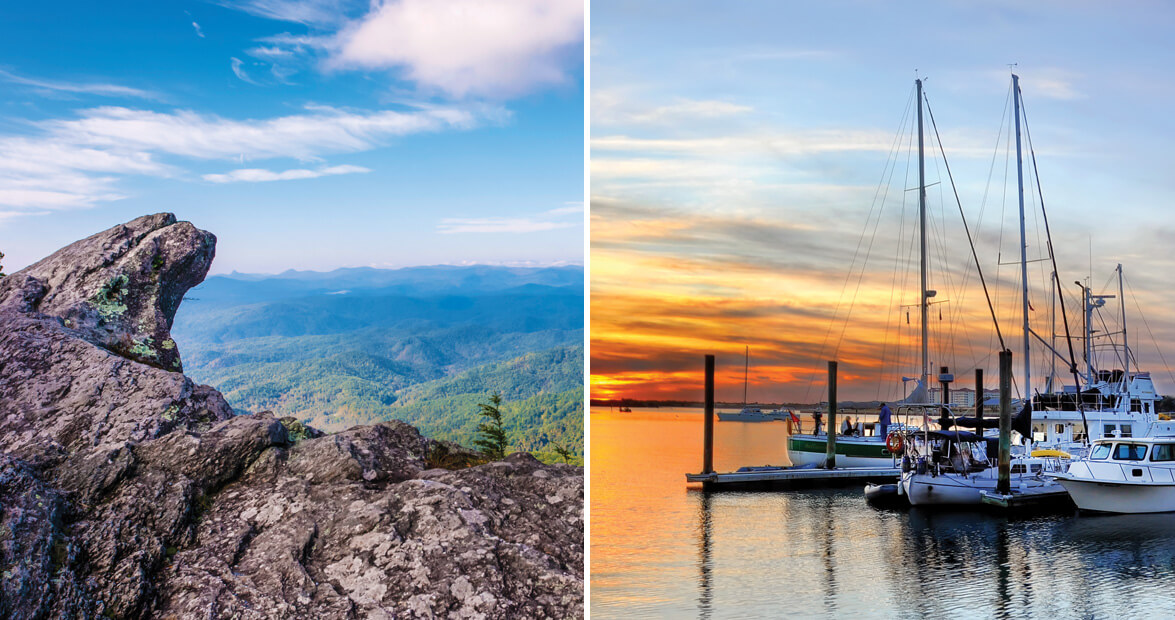 We North Carolinians appreciate our state’s red-clay heart, with its Triangle and Triad and shiny city named for a queen. But we’re inescapably drawn to the great escapes of North Carolina’s eastern and western extremities. The 300-mile-long coastline. The mile-high mountains. These are the places we exalt to the world, because beaches and mountains are universal in their seductive power.

Beaufort and Blowing Rock embody the essences of their respective regions, each capturing our ideal of what a coastal town and mountain town should look like and feel like. There’s Beaufort, with its sailboat-studded waterfront and old neighborhoods of white front-porch columns and live oaks. There’s Blowing Rock, with its grand houses overlooking ancient vistas, and its inns with names like Alpine Village, Mountainaire, and Cliff Dwellers.

It’s only natural, really, for North Carolinians — most of us living in that great in-between space devoid of summits and sea — to have a love affair with these two towns. Both become saturated with us (and with Pennsylvanians and Ohioans and Floridians) in the summertime: Blowing Rock for its cool mountain air and deep-forest shade, Beaufort for its wide-open water and welcoming beaches. Both treat us to ice cream, craft beer, fine wine, great food, art, antiques, T-shirts, comfy rooms, and perfect opportunities for selfies.

I visited each town in the span of a week, starting with Blowing Rock. Sitting at Kilwins on Main Street, with two scoops of to-die-for sea-salt caramel ice cream, I could just as well be down on Front Street in Beaufort, excavating the tub of mint chocolate chip at The General Store. Each town boasts two ice-cream shops within a block of each other. “It seems like in summertime, everybody on Main Street has an ice- cream cone in their hands,” says Justin Davis, who owns the Town Tavern in Blowing Rock.

Maneuvering through his restaurant’s signature cheese steak (eight ounces of sliced rib eye buried in mushrooms, onions, peppers, and jalapeños on Milano bread), I might as well be sitting at Clawson’s — first opened in 1905 as a grocery and bakery — on Beaufort’s Front Street, savoring its signature shrimp and grits. Or sampling from a menu overflowing with North Carolina craft beers, especially for “Friday Night Flights,” when the Beaufort establishment takes on the feel of a college town, not unlike Blowing Rock when App State students spill over from Boone.

When setting out to tell this tale of two towns, I wondered: Would the locals think it a leap to link the communities when the differences are so obvious? Blowing Rock, with a little more than 1,200 residents, has nearly one-fourth the population of Beaufort. It’s also 3,500 feet higher, and far hillier than its seaside sister, where the horizon is flounder-flat. And Beaufort is much older, founded in 1709, making it the third-oldest town in North Carolina. Blowing Rock, by contrast, wasn’t established until 1889.

Nevertheless, as I roam from mountaintop to waterfront, chatting with everyone from bakers to candlestick makers to innkeepers, people are quick — enthusiastic, even — to point out the obvious parallels and connections. Davis, the 34-year-old restaurateur, travels to Beaufort often because his in-laws live there. “They’re very, I’d say, quaint,” he says. “That’s a good word for it.” It’s a word liberally used to describe both locales, right up there with “charming” and “pleasant.” Jane Brown, front-desk clerk of Beaufort’s Inlet Inn, puts it this way: “I think, coming down here, the people experience something you don’t get anywhere else. And I think the same thing about Blowing Rock.”

In truth, Beaufort and Blowing Rock transcend regional distinctions. They represent our idealized notions of what it means to be a small American town. North Carolina, after all, is the state that gave the world Mayberry, a name that has become shorthand for the small-town idyll. A town where the sheriff didn’t bother to carry a gun always struck me as hopelessly, well, quaint. Now that North Carolina is among the 10 most populous states in the country, Mayberry may very well bear some big-city burdens.

But here I am now, paying my breakfast tab at the New Public House & Hotel in Blowing Rock, and speaking to one of the managers, Jenna Runstrom. Originally from Florida, she’s lived in Blowing Rock since 2009. Her descriptions of her adopted hometown give you the sense that Mayberry may be more than just a sitcom whistling Dixie. “Everyone knows everyone,” she says. “It’s kind of out of a storybook.” She loves that her kids’ school is right across the street. She loves that if she leaves her house or car unlocked, it’s no big deal. She loves that she can walk everywhere.

Feeling so inspired, I set out on Blowing Rock’s Main Street, browsing this shop and that, tasting fudge, touching Oriental rugs, smelling scented candles. At High Country Candles, Caroline Jensen is emphatic about this mountain town that lured her out of suburban Atlanta: “I just love the quaintness of it.” (That word again.) It’s just something about these mountains that always kind of held onto me, and I knew I’d be back up here.” 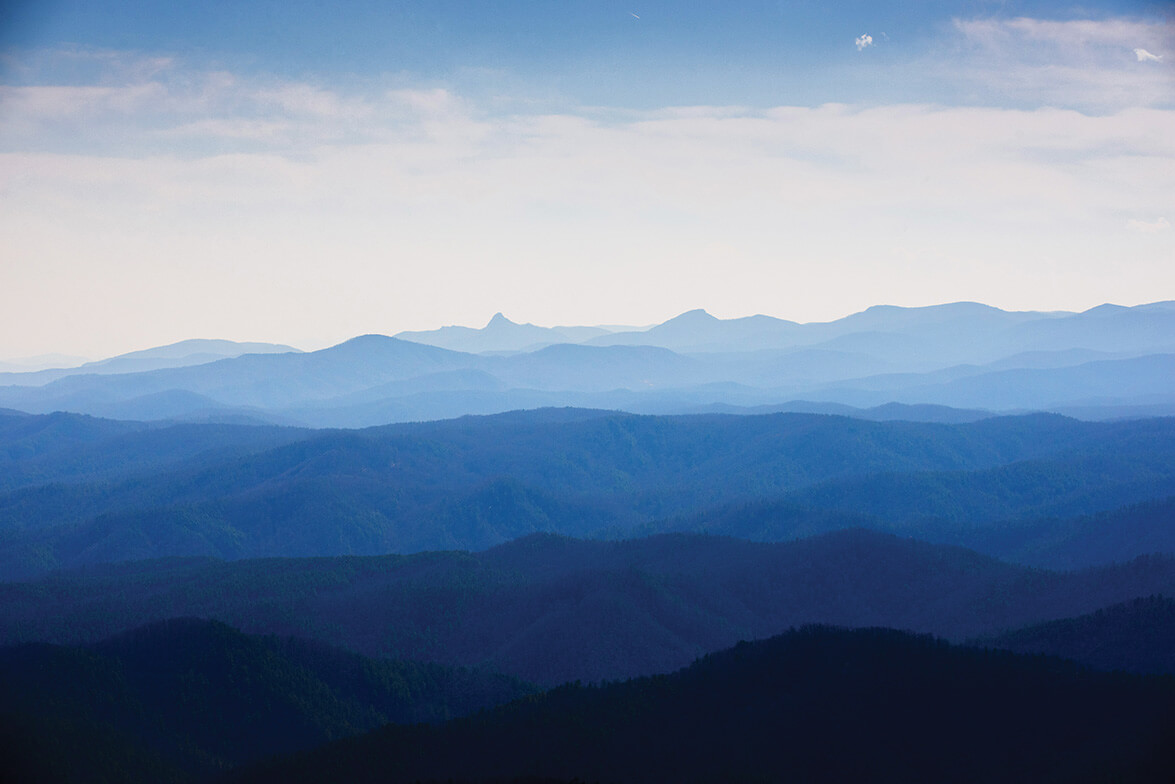 Maybe these towns hold us in their thrall because they’re such beautiful backdrops to love stories. Take Blowing Rock. The name originates from a stony outcropping just south of town that looms more than 1,500 feet above the Johns River Gorge. Because of the rock’s size and shape, wind blowing out of the gorge often shoots straight up. Fling a lightweight object over the ledge — a dishrag, say — and it’s bound to sail right back to you, like a boomerang. Snow is even known to fall upside down at the rock.

Which leads to a tall, windy tale of romance. Legend has it that a Chickasaw maiden was sitting on the rock, daydreaming, when she spotted a Cherokee brave in the woods below. Ever the flirt, she shot an arrow to get his attention. The two frolicked in the forest and fell in love. One day, the sky turned ominously red, which the young brave saw as a sign of peril, commanding him to return to his people on the plains. But alas, he was torn between heart and duty. He knew of no other way to end the torment than to leap to his death from the cliff. The heartsick maiden prayed daily to the Great Spirit, until a gust of wind blew the brave back onto the rock and into his lover’s arms.

It’s a sweet, if far-flung, little yarn, but you don’t have to suspend disbelief to have your heart captured by the love tales of these two towns. Stop in at The Spice and Tea Exchange, and you’ll meet two people who honeymooned in Blowing Rock two decades ago. Andy and Gayle Barth finally moved here in 2014 from Tallahassee, Florida. Says Gayle: “We decided to give up our day jobs instead of getting heart attacks and stress, and live where we wanted to live.” 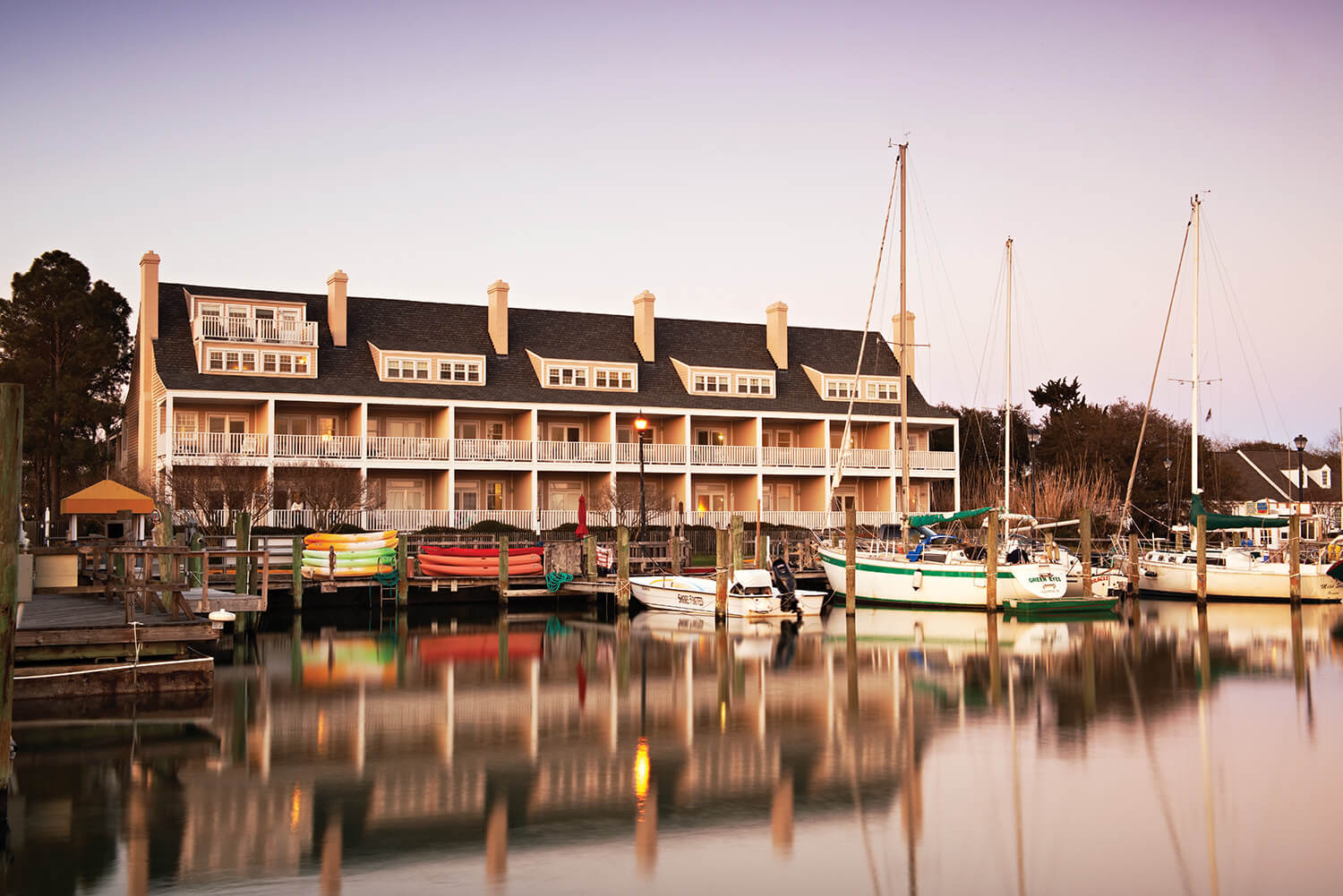 Down in Beaufort, breeze into The General Store and let the ladies tell you about the young man who proposed to his fiancée on the front steps, earning the couple applause and a pound of complimentary fudge. Or listen to local history buffs tell you about the “widow’s walks” that crown a few rooftops in town, an architectural feature particularly common in the port towns of the Northeast. These platforms with handrails afford a sweeping view of Beaufort Inlet. In long-gone generations, sailors set out from Beaufort to spend weeks or months at sea, leaving their wives at home to wait and worry. Such vantage points allowed them to scan the wide horizon, and look for a familiar mast.

Beaufort and Blowing Rock have also lent themselves as literary backdrops for best-selling authors. Beaufort, for one, lies snug in Nicholas Sparks territory, some of whose works have splashed onto the big screen with big-name actors (think Richard Gere in Nights in Rodanthe). Sparks lives 40 miles away in New Bern and sets nearly all of his plots in coastal North Carolina. He chose Beaufort as the setting for his 1999 book A Walk to Remember, whose opening page breathes with the air of a Southern coastal town: “ … and the air smelled of pine, salt, and sea, a scent unique to the Carolinas. For many people there, fishing in the Pamlico Sound or crabbing in the Neuse River was a way of life.”

Author Jan Karon likewise evokes the feel of a small Appalachian town in her beloved series called The Mitford Years. Mitford is a fictional community loosely based on Blowing Rock, where the author lives. Reviewers of the books invariably invoke adjectives such as “charming” and “endearing” and, yes, “quaint” when describing the town, and the book titles — At Home in Mitford; These High, Green Hills; In This Mountain. The stories hone in on the life of Father Tim, the rector of the town’s Episcopal church.

Blowing Rock and Beaufort are beautiful bookends to our state. Driving between the two is in itself a good read of North Carolina. Heading beachward from Blowing Rock, you follow U.S. Route 421 down the steep grades, past signs cautioning certain doom for lead-foot truckers, and watch the mountains fall into the rearview. For someone raised in North Carolina, this descending is as it should be: mountains to hills to plains to seashore. Those otherworldly places where mountains plunge straight into the oceans defy the natural order of things. In the creation story of our state, God made an expanse between the mountains and sea, filling it with red hills and barbecue joints. When the land becomes piney, sandy, and marshy, I know the sea is near.

So as I drive into Beaufort, one of the few landmarks of notable elevation is the U.S. Highway 70 bridge from the Port of Morehead City. I turn right onto Queen Street and head for the waterfront. The Inlet Inn’s third-floor room overlooks sailboats and yachts moored on Taylor Creek. Lunch — a Cuban sandwich with Carolina caviar (black-eyed pea salad) — is at the Beaufort Grocery Company, and gelato made on the premises of the Cru Wine Bar and Beaufort Coffee Shop is an afternoon snack.

Along the waterfront are hotels and the beach houses at Atlantic Beach, away to the southwest. The urge to stick my heels in the sand feels irresistible. But the wind blows with a vengeance today, and I could just as well be on Blowing Rock’s namesake ledge, where the winds barrel skyward. Beaufort and Blowing Rock may be two communities that are miles apart in distance, altitude, and attitudes (as well, as one bumper sticker proclaims: “Mountain people are wise; ocean people are happy”). But to those of us who live with the interminable tug of mountains and sea, these two towns — quaint and charming indeed — are one inseparable match.