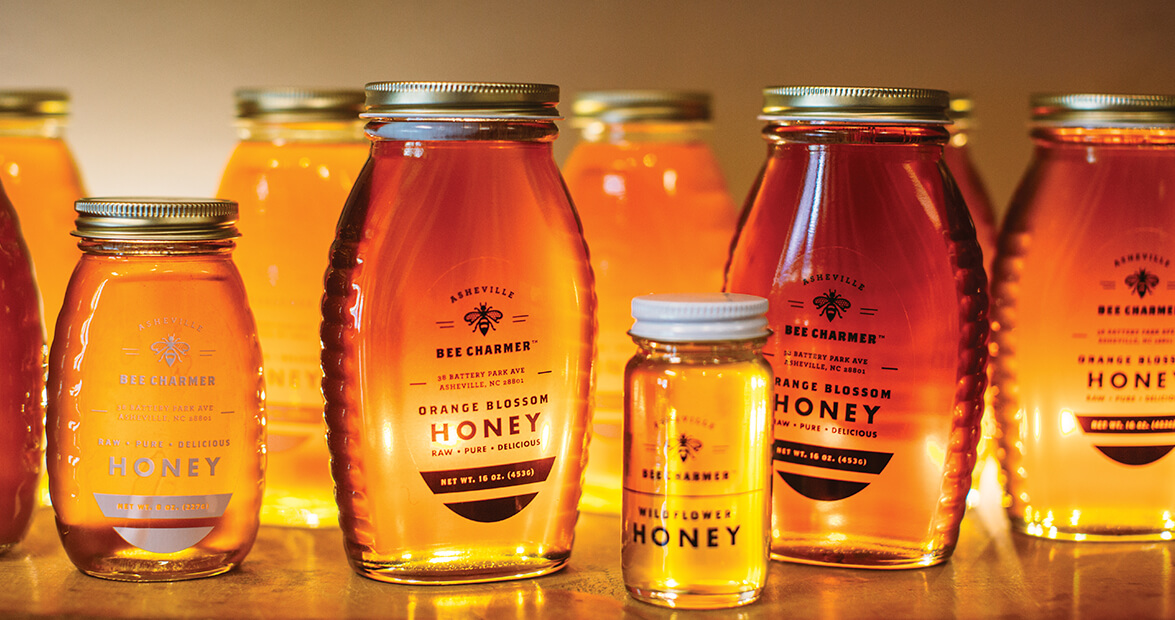 “Are you OK?” Jillian Kelly asked a woman who had been sitting with her eyes closed, silent and motionless, at the honey tasting bar inside Asheville Bee Charmer. “I’m 6 years old,” the woman finally, softly, replied. “And I’m at my grandmother’s table.”

For many, honey is history. For others, honey is the goodness of the land. Or it’s a nutritional necessity. Or it simply makes an English muffin — or a sourdough slice, or a bagel, or a cup of tea — taste better. “We really sell a story,” Jillian says. “And a lot of it is other people’s stories. We in turn get to experience such joy from the stories.”

The story of the Bee Charmer started at the Chicago Board of Trade, where Jillian and her partner, Kim Allen, were commodities traders. When Jillian discovered at age 52 that she could no longer eat dairy or gluten, the two began experimenting with cooking with honey and took beekeeping classes at a Chicago conservatory. 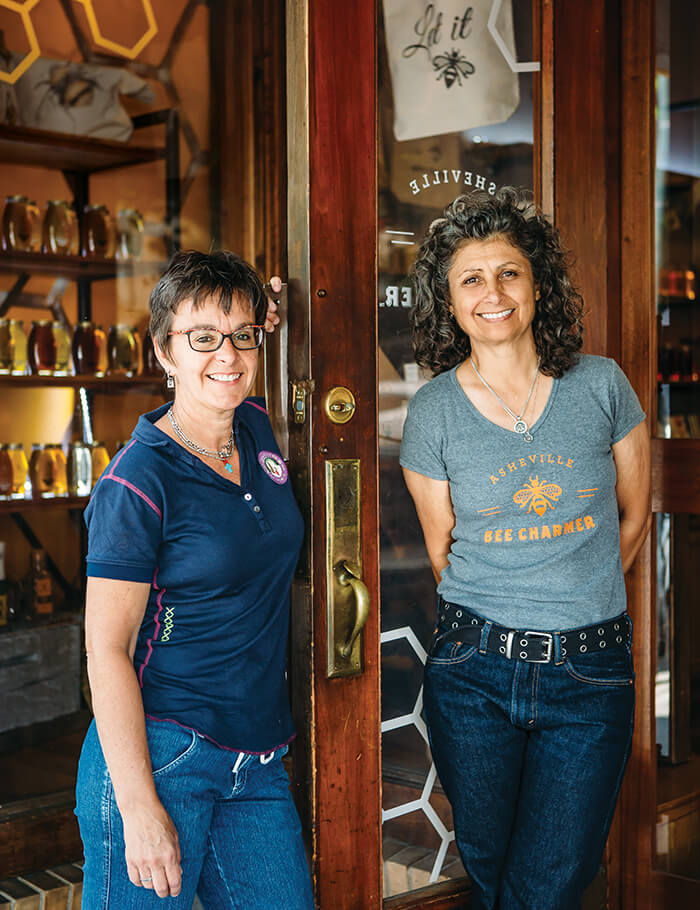 Kim Allen (left) and Jillian Kelly couldn’t resist putting a honeycomb touch on the front door of their store. photograph by Tim Robison

The pair had vacationed in Asheville, and in 2013, they moved there “for the same reasons everyone moves to this bubble of wonderfulness,” Kim says. Six hives and a year later, they opened the Bee Charmer in West Asheville. Since then, they’ve moved their store to Battery Park Avenue, in the heart of downtown.

For someone unschooled in honey, the Bee Charmer is an education for every sense. Ever seen a honey bar, where, as in a Napa wine bar, tasting is encouraged? Pull up a stool. Here are honeys from Italy, France, Tasmania, Ireland — as well as meadows around Asheville — dispensed on eco-friendly spoons with descriptions that will sound familiar to wine enthusiasts. “French Acacia is more delicate. Green fir tree is more robust.”

“Like wine, honey has a terroir. Lake Toxaway honey is likely a different color than wildflower honey from Maggie Valley.”

Yes, honey can be robust. It can also be spicy, or infused with a flavor, including a Jameson whiskey, or a single malt Scotch. One customer comes in for the latter, which he uses to make a rub (honey, dry mustard, smoked paprika) for meat he cooks in a smoker made from a mailbox. Although wildflower and sourwood honeys are the biggest sellers, never doubt that there’s also a market for Tasmanian honey, which comes from the native leatherwood tree.

“Europeans often prefer cold extraction,” Jillian says, wonking out a bit, explaining why some brands are foggier-looking than the clear golden nectar Americans are accustomed to. Scottish honey, for example, can be quite granular, a texture plenty of people long for. In the States, we often warm the frames, to about 110 degrees, to make the honey flow. Much higher, and you’ll be pasteurizing the honey, a major turnoff for purists. 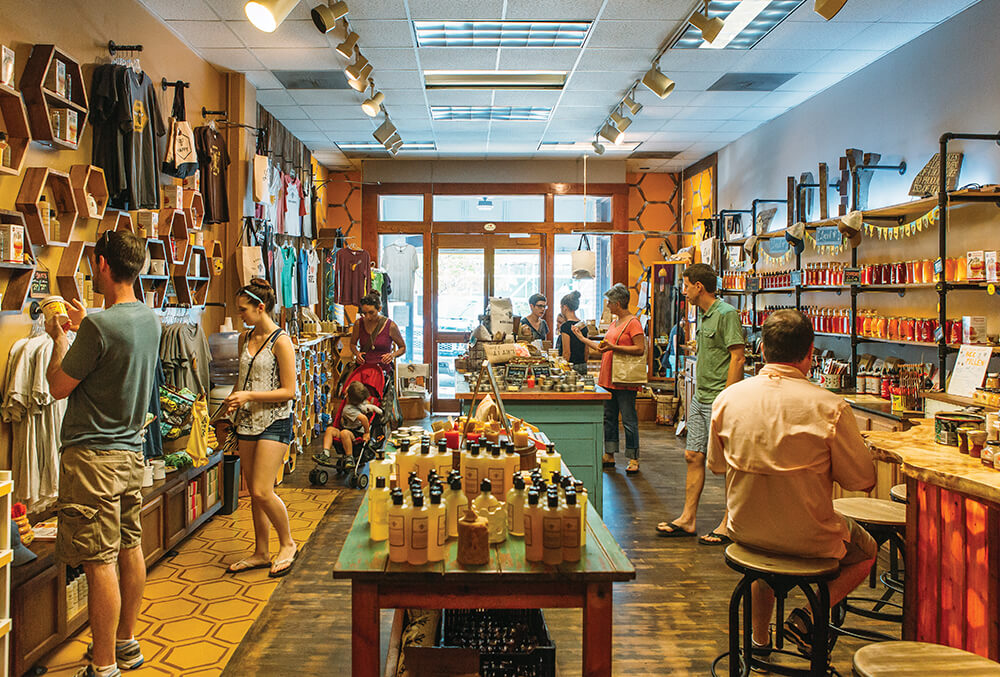 Asheville Bee Charmer is more than a store. At right, a bar where you can taste-test honeys from around the world. photograph by Tim Robison

Someone walks in and asks where Jillian and Kim get their beekeeping gear; the woman’s daughter thought, as a new beekeeper, she could do it without all the equipment. She got stung. “You gotta have at least a veil,” Kim says. The Bee Charmer serves as a sort of cooperative for local beekeepers, many of whom love their livelihood, or hobby hives, but don’t want to deal with marketing or retailing. They stop in and ask, Want to taste? In this, well, hive of activity — intentionally rustic, with wooden floors and walls, and vintage crates turned into display cases — friendships and opportunities are born.

Although veils — the sheer, hat-like head coverings that protect the face — hang outside the store, twirling prettily like kites in the mountain breeze, the Bee Charmer doesn’t carry beekeeping equipment. They do sell nearly everything else involving the wee winged pollinators, like “last drop” spatulas and spoons that rest on your mug so that your tea isn’t denied a drop of golden sweetness. A favorite is a plastic-wrap-like food covering — for fruit and cheese, say — made with beeswax. The squares, which come in varying sizes, are washable, reusable, and tacky without being sticky. Martha Stewart touted them, and the world went wild. A big chain store called, but the New England beekeeper who invented them refuses to cave to the big stores. Here’s that bee soap dish that you’ve looked everywhere for. Baby shoes bear needlepoint bees. Cuff links, billfolds, T-shirts, and pillows are bee-decked. Beeswax and candles have always gone hand in hand, and the Bee Charmer carries charming candles fashioned inside vintage jars and bottles, so that the lettering — on perfume, rouge, and tonic bottles; inkwells; and even old honey jars — is clearly readable. The store has trouble keeping candles molded inside local dairy bottles in stock.

“Butter,” someone murmurs at the honey bar. “Smooth.” Kim is still dipping up honey samples and swapping recipes with customers. (Note to self: Try honeycomb in next BLT for the ultimate sweet, savory, and textural experience.) “Like wine, honey has a terroir,” she says. “Like wines, some are ‘bigger.’ Lake Toxaway honey is likely to be a different color than wildflower honey from Maggie Valley.” And while 350 varieties of honey exist worldwide — not counting infusions — “the Bordeaux of honeys” is the nectar that comes not from another continent, but from a source that’s likely not far from your front door: wildflowers. The honey that, as you surely once penned in a yearbook, is 2 Sweet 2 B 4gotten.