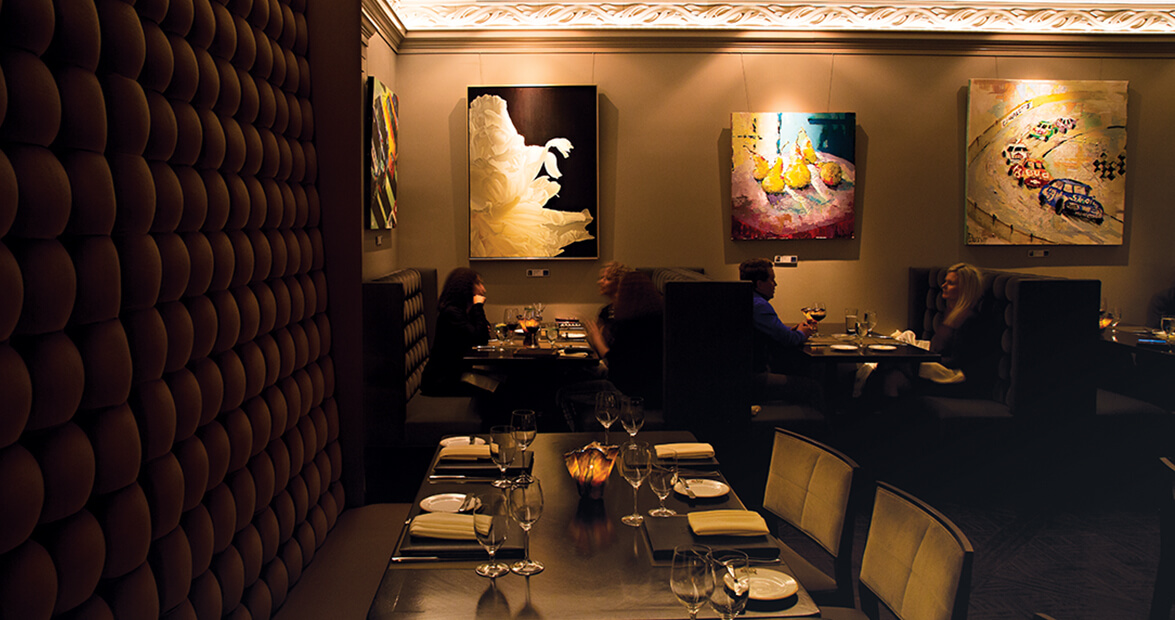 The most sweeping generalization you can make about Charlotte is that everything is brand spankin’ new. The people are new, the houses are new, the buildings are new, the restaurants are new. New, new, new.

That’s an oversimplification, of course, because a good chunk of the city was built in the 1960s and 1970s, and not everything is as homogenous as the inside of a bank branch.

Still, if you buy into that cliché, allow me to introduce you to the Ballantyne neighborhood. Maybe more than any other place, it exemplifies the concept of Always New Charlotte. Back when the Interstate 485 Outer Beltway was a mere concept, the Harris family, descendants of Gov. Cameron Morrison, owned a huge swath of hunting land about 15 miles south of Uptown Charlotte. These hundreds of acres were just woods, but with the highway on the horizon, that land became valuable. Johnny Harris, along with fellow developer H.C. “Smoky” Bissell, replaced the scrub and pine with a glimmering office park. And then, in the mid-1990s, Ballantyne was born.

And lo, it was perfect. The roads arc outward from the neighborhood’s nucleus: A wide-open intersection with arched monuments towering over each corner. Columns, buildings, and signs are all adorned with a grandiose “B”, which stands for both Bissell and Ballantyne. The shopping center is named Ballantyne Village. It’s upscale! There are townhomes. New but affordable! Past that, houses. Same! You are in a perfectly manicured, brick- and vinyl-veneered, good-schooled, close-to-the-corporate-office, cul-de-sac-ed, kids-going-to-soccer-practice style of town that is actually part of Charlotte proper, but feels suburban enough that there was a very real movement, in 2012, to secede and form a self-contained city. A new city.

So if you’re an outsider, it may surprise you that the crown jewel of a place meant to be so easily lived-in is a luxurious, sprawling resort. The Ballantyne Hotel & Lodge is a seven-story, 208-room modern palace that sits atop a spa and next to a golf course, among several six-story, glass-enclosed corporate offices. A Bissell Companies history says that it gives off the impression of a “Southern plantation on steroids.” 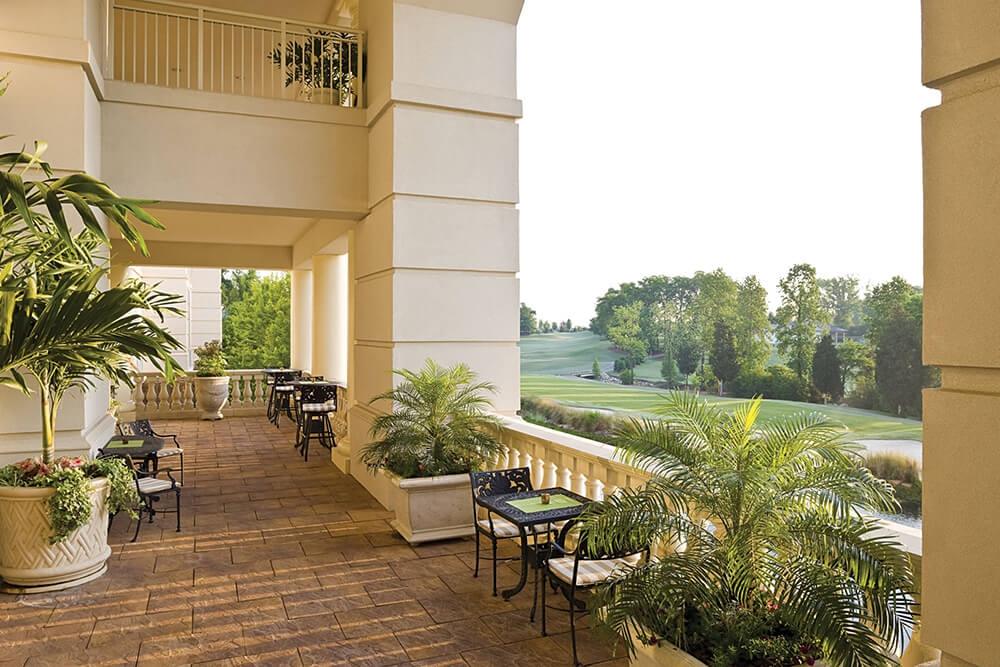 There are impressive corporate names on the buildings nearby — SPX, LendingTree, MetLife — and company executives needed an equally impressive place nearby to house out-of-town visitors. So Bissell built the hotel, which opened September 5, 2001. It’s a straight shot down I-485 from the airport, right off the highway, but the property manages to be a green-and-alabaster combination that’s secluded but not isolated, huge but not labyrinthine. Everything is well balanced. It, like the neighborhood, was designed to be perfect.

Take the golf course. You walk outside, tee off, and play 18 holes, some that are in the shadows of office towers. “It’s golf in Central Park,” says Dana Rader. She’s the Ladies Professional Golf Association’s teaching and club professional national president who runs a golf school here with seven full-time instructors.

This course wasn’t designed by a celebrity architect like Jack Nicklaus or Greg Norman. Instead, to get ideas, Bissell and his business partner David Conlan visited, without hitting one shot, 34 courses around Phoenix, Arizona. The resulting course is a challenging par 71, although one subtle piece of the design helps you. The bunkers keep your ball from getting into trouble, often saving it from a roll into the pond or a bounce out-of-bounds.

You’ll save more than strokes. The Golf Club at Ballantyne was created to be both close enough and nice enough that corporate guests wouldn’t need to spend hours traveling to and from courses in Asheville, Greensboro, or Pinehurst. “We can save you a full day,” Bissell says.

Inside the hotel, the Gallery Restaurant has been renovated twice since it opened in February 2007. This incarnation has purple walls adorned with buyable paintings priced in the thousands of dollars. In the main corridor hang paintings — not for sale — by Thomas Vieth, who was commissioned by the Bissells to paint scenes of Charlotte.

The chef flies in fresh wahoo from Hawaii on the weekends, serves foie gras, and looks out for North Carolina-made products, like prosciutto from Johnston County. In the spa, local honey is used in the tea. After your massage, someone hands you a small pouch of lavender brought from just a few dozen miles away in York, South Carolina.

In the lobby, the ceilings are high. The windows are large and have a graceful modern arch at the top. The walls are paneled with dark wood. Chandeliers hang from ceilings, and light fixtures the size of men and in the shape of acorns jut from the mezzanine. The doors are heavy. The rooms are colorful. The flowers are fresh.

Everything is well balanced. The hotel, like the neighborhood surrounding it, was designed to be perfect.

Smoky Bissell and his late wife, Sara (Johnny Harris’s sister), traveled across the globe with the Conlans to see the great hotels of the world. They circled the earth twice, once in 15 days, then 13 days, traveling west to avoid jet lag. They found inspiration in Europe and Asia. In Bangkok, they bought a three-wheeled tuk-tuk to display, took design cues from a Mandarin Oriental hotel, and racked up an enormous FedEx bill to send back 80 more pieces of art, which now line the guest-room corridors.

The Bissells wanted the hotel to be its own independent entity that, at the same time, matched the character of the neighborhood. They’d built branded hotels before, and had no control over the decor, which had to match strict guidelines set by, say, Marriott. “It’s not fun to not make your own mistakes,” Bissell says.

Today, when someone important comes to town and wants to stay in quiet, spacious luxury, The Ballantyne is it. In the fall, the NBC Sunday Night Football crew — Bob Costas, Al Michaels, Cris Collinsworth, all of them — stayed here before calling a Panthers game. President Barack and First Lady Michelle Obama have stayed here.

The Ballantyne is a respite from constant busyness. The pace is deliberately slower.

Funny thing, though. It’s not just out-of-towners who visit. About three of every four people who play golf here live in Charlotte, or somewhere within its metropolitan grasp. Same with the spa. In the men’s locker room, someone has left the TV on the Bloomberg channel. Just before his massage, a robed man in a hallway waits for his wife, and tells a worker they’re celebrating their 18th wedding anniversary. He is holding his smartphone. People aren’t here solely to disconnect, it seems.

The hardest time to get a room at The Ballantyne is midweek because Charlotte is largely a business destination. Yes, Charlotte likes to tout tourist attractions, such as the U.S. National Whitewater Center, the NASCAR Hall of Fame, and Carowinds, but really, it’s a city of convenience that’s meant to feel like home. That’s Ballantyne to a T. People live and work here. And thanks to the resort, they can play here, too.

At the Gallery Restaurant, waiter Billy Weinstock brings out a plate of elk, which came after a plate of lamb cheek, which followed the Mangalitsa ham. The menu changes several times a year. “I never worry about the food,” Weinstock says. “It’s always perfect.”

He hints at a spot in the hotel that many people miss. In a small hallway, you’ll find pictures of what the area looked like in 1994, when it was just roads in the woods. And that’s when you realize that even though this place is so new, somehow it feels like it’s always been here.