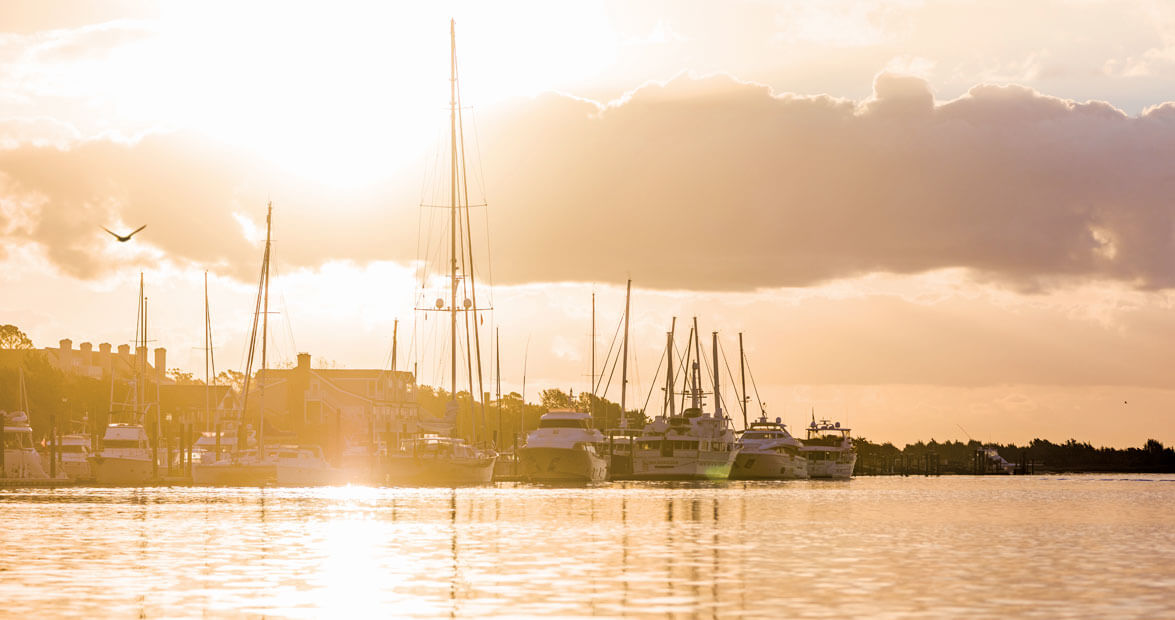 The woman making her way to Carrot Island grips a paddle with slender fingers. Her nails are painted the color of sweetbriar roses. Water drips from the tip of the wooden blade, making ripples on the surface of Taylor’s Creek. Each droplet, part of the whole. Morning after morning, evening after evening, she makes this trip.

On shore, sanderlings trace the ocean’s shifting edges, leaving tiny indentations. The migrating birds, arriving at Carrot Island from their arctic nesting grounds, might have already forgotten the snow-covered tundra, but the woman in the canoe marvels at their journey. The world is interconnected in ways that are difficult to fathom, even for her, a trained scientist. 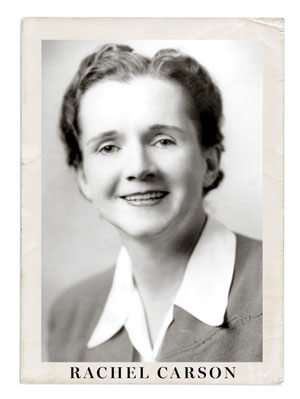 The woman is Rachel Carson, who will go on to become one of the most famous authors of the late 20th century. Her seminal book, Silent Spring, about the perils of indiscriminate use of pesticides, will be published to wide acclaim in 1962, and some will credit Carson with launching the modern environmental movement. But the woman paddling to Carrot Island in 1938, who is there working as a biologist for the U.S. Bureau of Fisheries, has not yet written a single book. There is nothing about Carson’s quiet life on the coast of North Carolina to indicate that she will end up taking on corporations and government agencies to protect human and ecosystem health.

Carson would publish three books about the ocean before penning Silent Spring. And it was in the first section of her very first book, Under the Sea-Wind, published in 1941, that she wrote of Carrot Island, Town Marsh, and Bird Shoal, where she followed sea life through the seasons. Just as life is nurtured in estuaries, where fresh water mixes with salt, Carson’s life as an author found genesis on the Carolina coast.

Years later, she was living closer to her native Pennsylvania when she began to see reports that made her worry for the birds of Carrot Island. In particular, the scientific data trickling in about the pesticide dichlorodiphenyltrichloroethane (DDT). Carson saw that when the public knew enough about this chemical compound to start asking questions, the government response was to feed them “little tranquilizing pills of half truth.”

During World War II, DDT was hailed in the media as a “savior of mankind.” Housewives sprayed it into kitchen cabinets. Children chased DDT trucks down suburban roads, arms spread wide, the chemical coating their skin, teeth, and hair.

Carson was a poet of science, a writer who could take complicated information and turn it into lyrical prose that struck chords of wonder in her readers. Rigorous in her scientific research, too, she was an environmental reporter and writer before many even knew the meaning of the word ecology.

Ecology: the way fates of landscapes and organisms are bound together. Tightly and forever.

“We want people to experience what Rachel Carson experienced.”

If the term environmentalist has a negative connotation, it might trace back to the chemical industry’s backlash against Carson when she published Silent Spring. The New York Times reacted with the blazing headline, “Pesticides Industry Up in Arms Over a New Book.” But, though Carson was impassioned, she strived to keep her composure. When a spokesman for the agricultural chemical industry attacked her in a CBS special report, “The Silent Spring of Rachel Carson,” she responded calmly to his comments favoring chemists. “To these people, apparently, the balance of nature was something that was repealed as soon as man came on the scene … You might just as well assume that you could repeal the law of gravity,” she told him. “The balance of nature is built of a series of interrelationships between living things, and between living things and their environment.”

Carson’s lifelong work was inspired by a love of living landscapes — and her favorites included the shorelines around Beaufort. 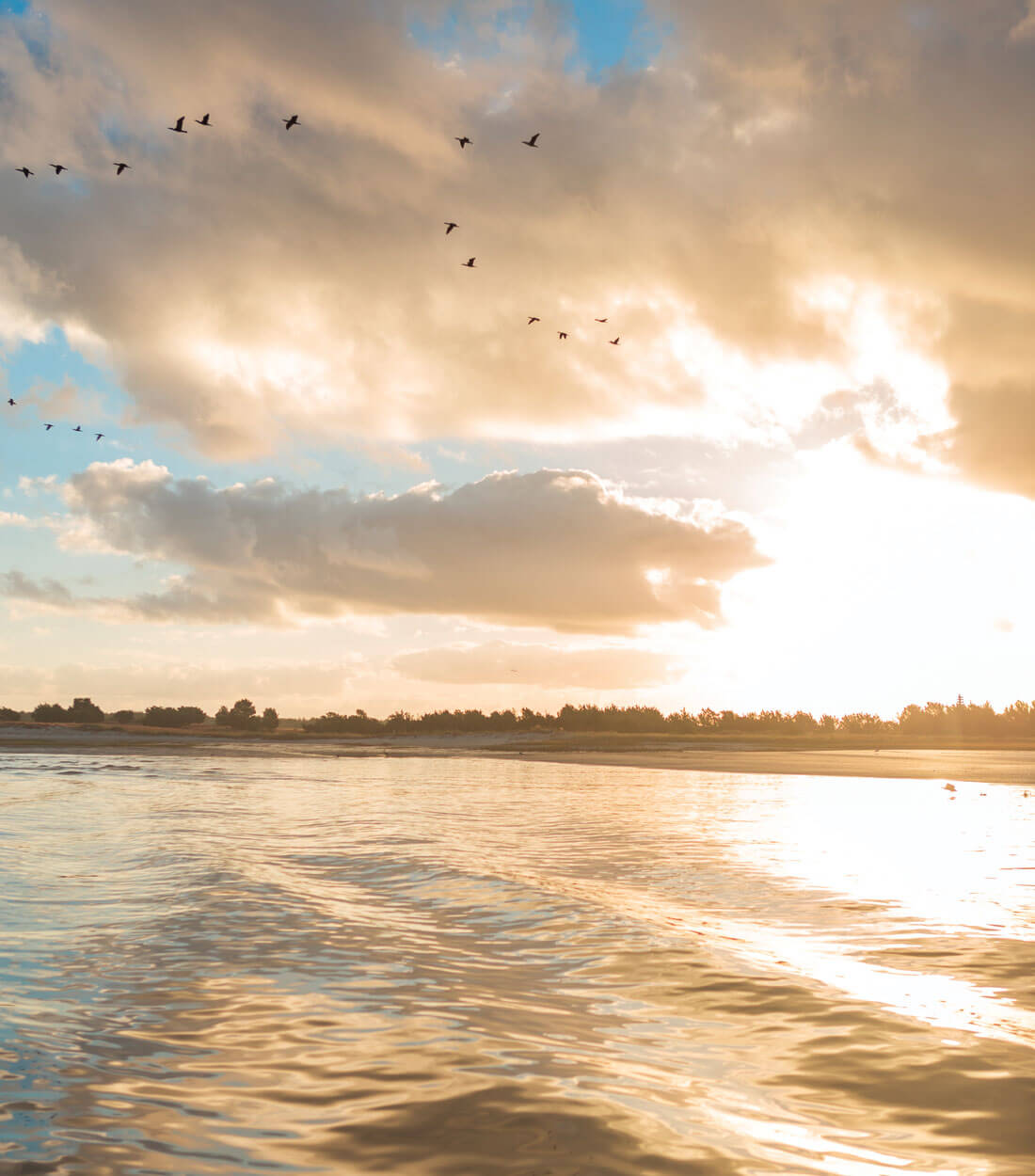 On her canoe trips, the noted author and environmentalist Rachel Carson would have seen cormorants fly against sunburnt skies over Bird Shoal. photograph by Baxter Miller

On a humid morning, more than 50 years after the publication of Silent Spring, a team of scientists wades through water the color of tea that’s just begun to steep. It’s up to their waists and warm enough to dissolve sugar on contact. If Carson were alive today, these men and women would likely be her colleagues. As it is, she’s with them in spirit, since they’re working in what’s now known as the Rachel Carson Reserve, a 2,300-acre collection of waterways and islands, including Carrot Island.

Often, to gauge the health of an ecosystem, scientists look to bird populations. But for his doctoral research, East Carolina University student Christopher Moore came up with the idea of looking at parasites, which are easier to count and capture. Because parasites are sensitive to pollution, the more of them there are, the healthier the ecosystem. Parasites, Moore explains, need multiple hosts for different parts of their life cycle, so they can be valuable bio-indicators. Currently, the group is sampling sites where shoreline restoration efforts are being tested: Will loose shells or man-made oyster-catcher lattices be better at fostering biodiversity and, therefore, parasites?

Moore and his faculty adviser, April Blakeslee, lift the small plastic control crates they’ve seeded off Carrot Island. Oyster shells rattle as they fall onto the screen, along with the life-forms that have gathered among them. “It’s like panning for gold,” Moore says, holding up a pinfish, iridescent in sunlight. Brandon Puckett, the reserve’s research coordinator, pulls a snapping shrimp from his quarry. Its tiny claws pop like electrical charges. Everything they find goes into collection bags for examination back at the lab.

Already, research has revealed that living shorelines — or those maintained with things like oyster beds, rather than solid concrete bulkheads — are more resilient during hurricanes and cheaper to maintain once established. In light of this, Puckett and other staff at the reserve are working with local marine contractors so consumers might understand that, when it comes to protecting their property from erosion, there are sustainable options.

Moore’s fellow student, Rebecca Barnard, is collecting the day’s snail haul. Snails eat parasite eggs, so she suspects they’re teeming with relevant research material. Their wet bodies twinkle like stars as they squirm in sunlight, ever so slightly.

“The diversity of species out here never ceases to amaze me.”

When Barnard leans toward the water, a biting fly takes interest in her. Instinctively, she swats it away. “We all hate bugs,” she says. “But bugs make the world go round, and invertebrates are the bugs of the marine system. The diversity of species out here never ceases to amaze me. You’ve got to get out here, digging in the mud, to understand nature’s complexity.”

It is this sense of wonder, as much as anything, that drove Carson. “Those who dwell, as scientists or laymen, among the beauties and mysteries of the earth, are never alone or weary of life,” she wrote.

Shrimp and fish leap from the water, as strong and as high as grasshoppers. When Blakeslee discovers a baby scallop, she yelps, “That’s so cute!”

Half a century after Rachel Carson died, chemicals are still being discharged into public water sources before anyone knows how they might affect humans, and haphazard development often threatens ecological balance. But, even when times are dire, science, at its best, stands to replace human fear of the natural world with a sense of joy and discovery. Because, through the lens of ecology, it’s clear that to fear nature is to fear life itself — even when it comes to parasites, would-be teachers of how species can more comfortably fit together.

“Look at a bulkhead and then look at a seawall or living shoreline,” Puckett says. “You don’t have to be a scientist. It’s obvious which one supports life. If you don’t develop intelligently, there will be environmental consequences. North Carolina is at a point where we can do it, low-impact. Less than 10 percent of our shoreline is hardened. We still have time to make informed choices.” 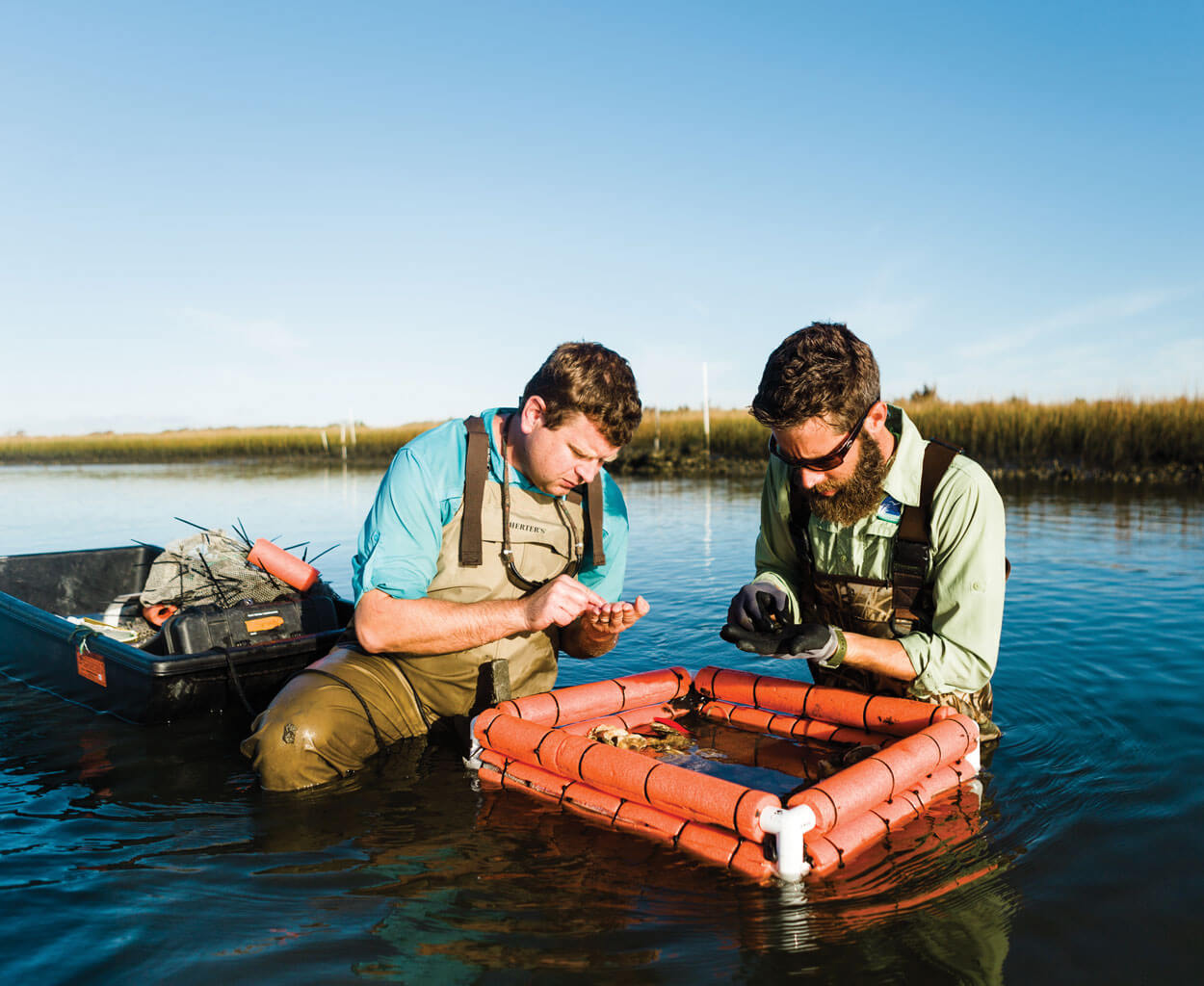 The following day, after the blush of dawn has faded, Puckett’s colleague Paula Gillikin prepares a boat for departure from the National Oceanic and Atmospheric Administration facility on Pivers Island. It’s time for one of the public field trips the reserve offers during the summer months. The boat, Edge of Sea, is named for one of Carson’s books. “We want people to experience what Rachel Carson experienced,” Gillikin says.

Carrot Island and its neighboring landmasses are, as in Carson’s day, accessible by boat only. “It gives me chills,” Gillikin says, “to think about Rachel Carson paddling across here in a canoe.”

In the first chapter of Under the Sea-Wind, Carson follows the life of a bird, a black skimmer. But it’s the pelican that locals associate with the writer. “The pelican got scarce here because of DDT, so people around here connect the pelican’s recovery with her efforts,” Gillikin explains. “A lot of people can’t relate to the smaller life-forms that support an ecosystem, but people can relate to a pelican.” 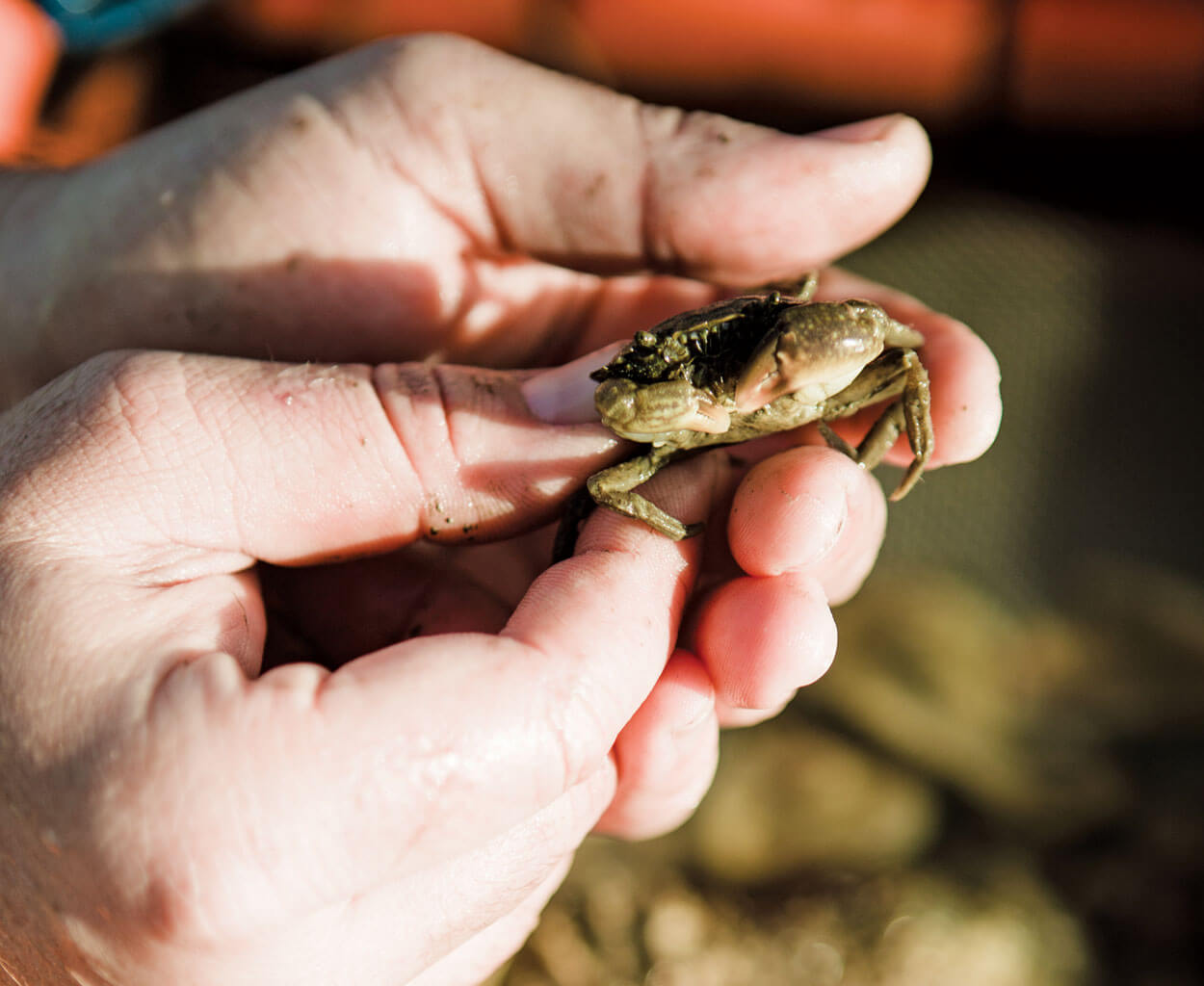 A researcher inspects an Atlantic mud crab, one of a variety of species gathered in the Rachel Carson Reserve. photograph by Baxter Miller

On Carrot Island, Jeannie Kraus, the day’s volunteer guide, points out sea oats, which have started to swell with seed, and blanket flowers that have just begun to bloom. Every season, there’s something new to see because, years ago, concerned locals, including Kraus — in association with the Nature Conservancy and, later, the State of North Carolina — protected the island from private development.

Kraus guides a group of visitors, ranging in age from 7 to 70, across the island, pointing out flora and fauna. Small fiddler crabs flow across the trail like living coins poured from a collection cup. On the other side of the island, the group emerges onto the hard-packed sand of Bird Shoal.

The island itself has changed since Carson’s time — due to dredging, hurricanes, and seed dispersion — but the wilder area remains much as it was when she spent time here. When the group walks through a sheltering tunnel of brush and into full wind, one woman drops to her knees in the sand. “I could happily sit here the rest of my life,” she says. “This is my favorite thing to do at the coast, just sit and take it all in. The way it smells. The way it feels. You look out at the water and it’s infinity.”

“To stand at the edge of the sea,” Carson wrote, “to sense the ebb and the flow of the tides, to feel the breath of a mist moving over a great salt marsh, to watch the flight of shore birds that have swept up and down the surf lines of the continents for untold thousands of years … is to have knowledge of things that are as nearly eternal as any earthly life can be.”

Off the tip of Bird Shoal, a pair of pelicans swoop and splash. A woman on the sand declares, “I love pelicans; they’re so prehistoric looking.”

The rest of the group pauses to watch the pelicans fill their gullets with fish that ate invertebrates that contained parasites that were nurtured by oyster reefs. For every process we observe, there are a million others connected to it under the surface, for better or worse. It’s one of Rachel Carson’s enduring lessons. “This place is important for birds and wildlife — and our souls,” Kraus says. “We don’t ever want to take it for granted.”