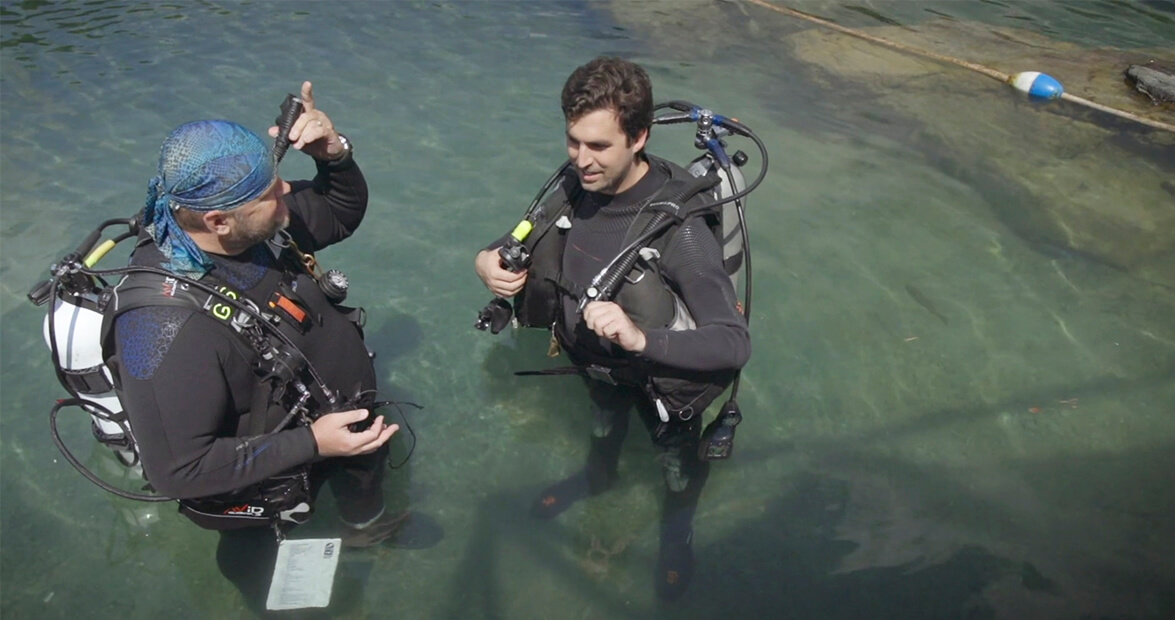 SPONSORED BY Capital Subaru of Greensboro

If you can lift the 30-pound tank onto your back, you’re already halfway there — the moment you slip into the water, everything becomes weightless. Janet Outlaw, owner of Blue Stone Dive Resort, has been diving since 1978, which means she’s carried her fair share of oxygen tanks and has experienced this feeling thousands of times, yet even now, as she slips into the water, out escapes a quiet ahh, because once again, she is home.

“That’s what I like about this,” Outlaw says. “It takes the pressure off you.” She means that figuratively, too, and that’s something she tries to impart to everyone interested in trying scuba diving: If you have a lot of stress in your life, you can leave it all behind in the water.

To spend a day in the water with Outlaw and her staff, you likely won’t have to travel too far; their location in the center of the state makes the facility accessible to a majority of North Carolinians, though many are surprised to find it in one of North Carolina’s smaller towns.

“They’re like, ‘Thomasville — this is in Thomasville?’ ” Outlaw says. “Not Greensboro, not Winston. Thomasville.”

Though you may pass other diveable quarries on the drive in, Blue Stone Dive Resort is the only one to supply rental scuba equipment like regulators and compressors, host events like an underwater pumpkin carving contest in the fall, and offer a private place to take a shower and change into dry clothes. Originally born from the need for a proper scuba diving facility away from the coast, Blue Stone Dive Resort is a rare yet invaluable resource for instruction, training, and recreation for divers across the south.

Prior to Outlaw’s late husband, Robert, opening Blue Stone Dive Resort, local divers from North Carolina, South Carolina and Virginia were limited to recreational diving at quarries owned by the Piedmont Diving and Rescue Association, where amenities, if present, were sparse.

Given the number of dive shops in the area — including the couple’s own, the Blue Dolphin Dive Center, originally located in High Point and now in Winston-Salem — Robert saw an opportunity to create a full-service diving facility. So he did, opening Blue Stone Dive Resort to the public in 1993.

The site had operated as a slate rock quarry until 1961, when miners hit an underground spring and it began to fill faster than they could pump out water. Unlike other quarries across the state, the 19½-acre lake here is just less than 100 feet instead of hundreds of feet, which means divers can dive safely without serious concerns of decompression sickness. On an average day, visibility is typically between 30 and 40 feet, and the lake is fed by five freshwater springs. Finally, there’s the foliage — during the primary months of business from April through October, a lush and scenic treescape surrounds the quarry. In Robert’s opinion, nature had done its job to provide central North Carolina with the perfect spot to start a dive resort; he just had to put the provisions in place to make it happen.

“Every bit of this has been over years and years,” Outlaw says. Gradually, Robert expanded the property and purchased items to help build the site into the dive center of his vision, with a bit of his unique personal style here and there.

“He would come up with something that he’d throw out to you and you’d go, ‘Are you out of your mind?’ ” Outlaw says. Sometimes he was, just a little, but many of the things that started as quirky ideas are now beloved features that divers returning to the quarry recognize make it its own, such as the trams made from airport baggage transportation carts, or the underwater PT boat divers can explore. Perhaps the quirkiest, are the two underwater commodes, marked by a white buoy in the middle of the quarry, which send the staff into a fit of laughter every time they talk about them.

“We call it the divers’ rest area,” one of the staff members says between giggles. “It’s even got a toilet paper roll.”

Safety is the top priority for the staff at Blue Stone Diving Resort, which means diving here comes with a list of rules. Every diver must be at least 10 years old, though Outlaw recommends a minimum age of 12, and everyone must dive with a partner. To enter the water, divers must either have a valid certification or be part of a class. The dive resort offers a four-day certification program split over two weekends to qualify for open-water dives up to 60 feet, and then two advanced courses — a continuing education and a deep-diver training course — which allow divers to dive to maximum depths of 100 and 132 feet, respectively, and under different conditions, such as at night. Private lessons are also available.

For those not ready to commit to certification courses, the resort also offers an introductory Discover Scuba Diving program, where guests can learn the fundamentals of diving and spend three hours in the water, getting a small taste of the true scuba diving experience. The lower-cost discovery program comes with no strings attached, but many beginners find themselves signing up for more once they’ve seen below the surface.

“They go under and they’re in Disney World, instantly,” Outlaw says. Plus, here, there are no waves, no current, and no surge. She hopes all of her visitors will have a chance to experience the beauty of diving in the ocean and interacting with marine life, but until they’re ready, Blue Stone Dive Resort is “a safe place for newbies to just come and play,” she says. And play they do. Weekends at the quarry find groups of friends grilling in the grass, visitors settling into the dive lodge for multi-day visits, and instructors helping novices into their wet suits for the first time. On the surface it’s a picturesque scene, but everyone here knows the real fun is waiting just below.