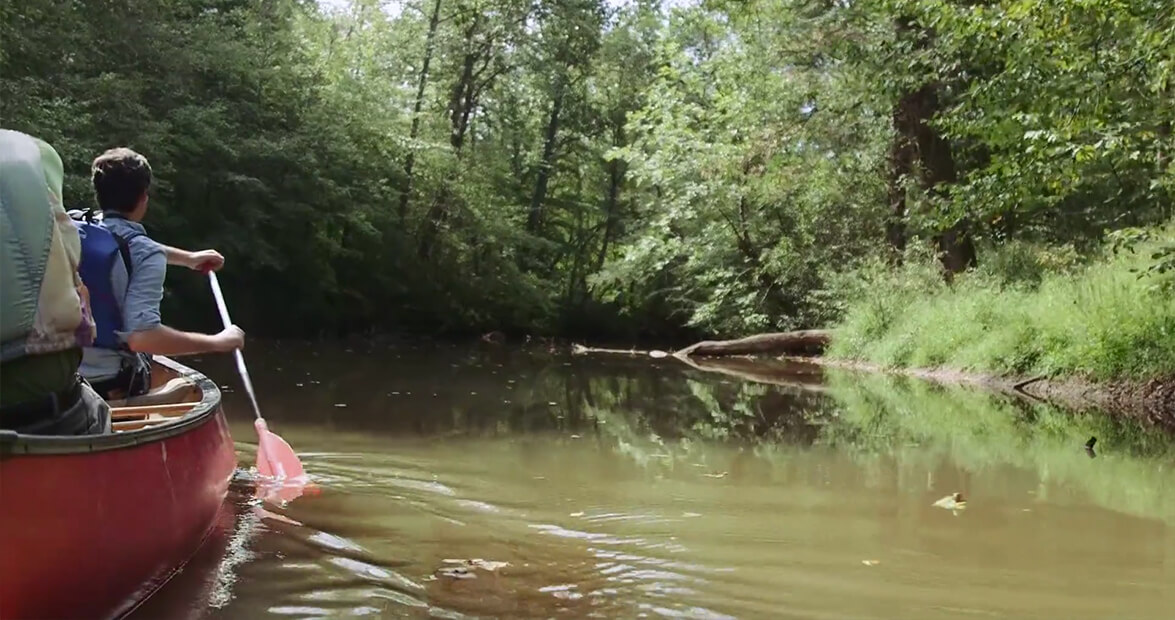 North Carolina is known for its scenic rivers, from the mountains to the coast. There are more than 40,000 miles of rivers and streams in North Carolina, and one out of every ten acres in our state is made up of water. Your mind may wander to the extensive Cape Fear and Neuse Rivers, the Yadkin or the Dan, each stretching more than 200 miles from start to finish.

Then there’s the Triad’s own Haw River. A tributary of the Cape Fear River, the Haw flows 110 miles through central North Carolina, helping shape the southeast border of Alamance County. It runs into the Jordan Lake reservoir, and then merges with the Deep River to form the Cape Fear, four miles south of Jordan Lake dam.

The Haw River is a haven for wildlife in the Piedmont, and a welcome escape from surrounding towns. But it hasn’t always been the nature sanctuary it is today.

Native Americans first occupied the area, fishing from its clean waters and growing crops in its rich soil. European settlers later built the area’s first gristmills, using the Haw River for power, and textile mills followed. The mills remained in operation from the 1850s until around 1980.

With the mills came pollution — and lots of it. Rumor has it that those who swam in the water decades ago would emerge slightly tinged with dyes from the textile mills.

The community was convinced that the damage was irreversible.

“It just wasn’t valued the way a resource needs to be to gather people around the issue,” said Brian Baker in a 2015 interview with Our State. Baker was the founding coordinator of Haw River Trail Partnership, which spearheaded restoration efforts in the area. He is now director of Alamance County’s Recreation and Parks Department. “The key to that was getting people out to the river.”

That’s where Haw River Canoe & Kayak Company comes in. Founded in 2005 and located in Graham, right next to Saxapahaw, its sole purpose upon inception was to introduce people to the Haw River by putting them right in the water.

“Instead of pushing drugs, we push nature,” says Joe Jacob, president of Haw River Canoe & Kayak Company. “People get addicted to it. It’s a good thing because we all breathe air, and we all drink water, and it’s all a service of nature. And if we’re not conscious of that fact, we’re going to pollute our water and our air worse than it is now.”

Haw River Canoe & Kayak Company offers more than 30 different paddling excursions throughout the year, for newcomers and experienced paddlers alike. These guided trips typically range from $35 to $85 per person, depending on the activity, and cost more if the trip is overnight.

But there is one paddle that is completely free: the River Clean-Up Paddle.

If you don’t have your own boat, a canoe is provided at no extra charge. Private boaters are encouraged to participate, with people on hand to help shuttle their boats and equipment. Participants are expected to collect at least one large trash bag of debris, and everything collected is either recycled or brought to a local landfill.

River conservation and preservation is extremely important to Jacob and his company. The more people in the community and beyond who are exposed to everything the Haw has to offer, the more likely they are to care about its upkeep.

“You can’t expect people to care about something unless they have first-hand experience with it,” says Jacob. “We’re not going to have something like the Haw River in the future unless people care about it.”

One trip that we got to experience first-hand was the Paddle & Patio Party, a monthly afternoon excursion that focuses on slowing down, enjoying your surroundings, and appreciating what the Haw has to offer. The trip starts with a low-key paddle on the upper Haw River and ends with a visit to Grove Vineyards & Winery in Gibsonville, complete with a pizza dinner and a refreshing beverage. When the weather is just right, it’s hard to beat a relaxing afternoon on the water followed by a glass of wine — and usually live music — to round out the day.

Joe Jacob says that people paddle for one of four reasons: to exercise, to get out in nature, to socialize with other paddlers, or to find peace in solitude.

“One of the things that I think you notice a lot is the quiet,” says Jacob. “There are no power boats on the Haw River, so there’s not that noise disturbance that could take away from the solace you might be looking for.”

We’d like to add another reason to that list: the Haw River is undeniably beautiful. All you have to do is take a moment to appreciate it.

“We are visual creatures, you know,” says Jacob. “Photographers notice differences in light. But most people aren’t used to getting images through their optic nerves, and when you get outside in nature there are so many different colors and lights and shades. I think it really makes a difference for a lot of people.”