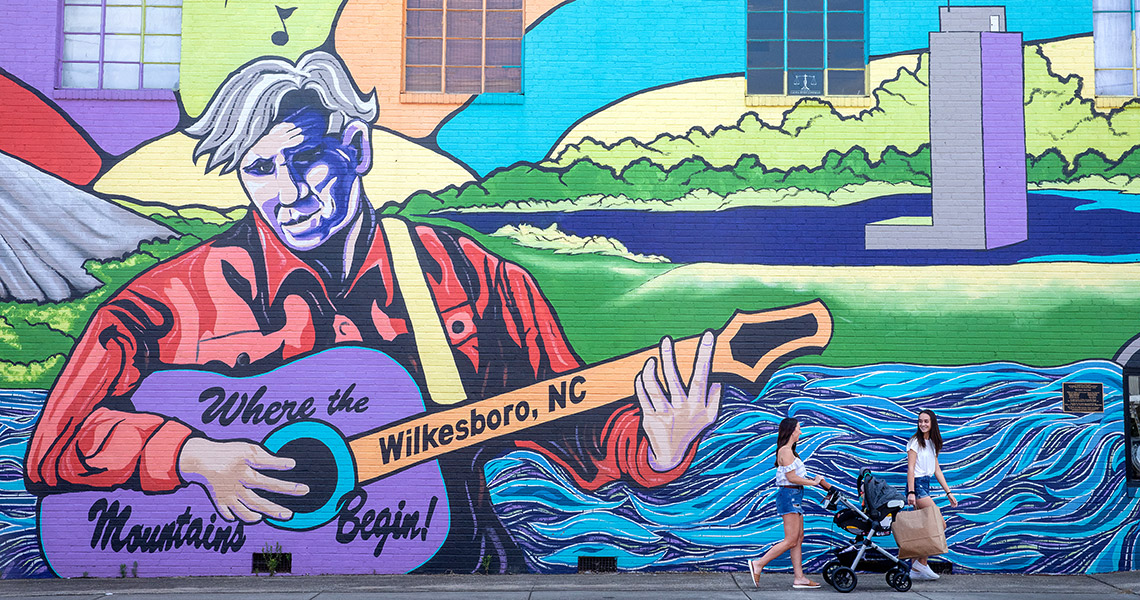 Master distiller Buck Nance has been making moonshine in the woods of Wilkes County since before he can remember. He learned from his father, but he doesn’t know how far back in his family the tradition of making moonshine goes. “When I came up, you didn’t ask questions, so I never inquired about that,” Nance says. “Most people [who] ask questions, they either were the law, or they were gon’ give it to the law.”

These days, Nance makes legal spirits at Copper Barrel Distillery in North Wilkesboro, where the moonshine tradition runs deep. With half a million gallons a year of untaxed liquor flowing through Wilkes County in the ’40s and ’50s, revenue officers dubbed this area the “moonshine capital of the world.” Whiskey runners modified their cars with faster engines to outrun the law — and out of this, NASCAR was born.

Wilkesboro also has rich traditions of bluegrass music and artisan crafts, as evidenced by the downtown mural of Doc Watson, the annual MerleFest music festival, and the Blue Ridge Craft Trail. Add to that the countless opportunities to get outdoors on land and in the water, and Wilkesboro is the perfect place for a well-rounded adventure.

Find Your Back Road

Wilkesboro, minutes from the High Country, wows you with mind-blowing musical talent, scenic mountain views, and Southern small-town charm. Enjoy the outdoors with local wine, an adventure trip, or our monthly Concerts in the Commons. 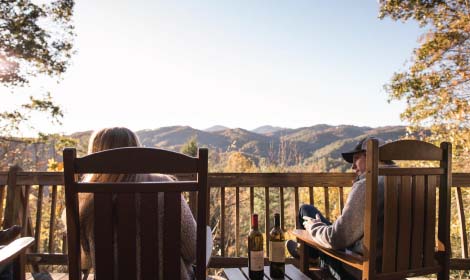 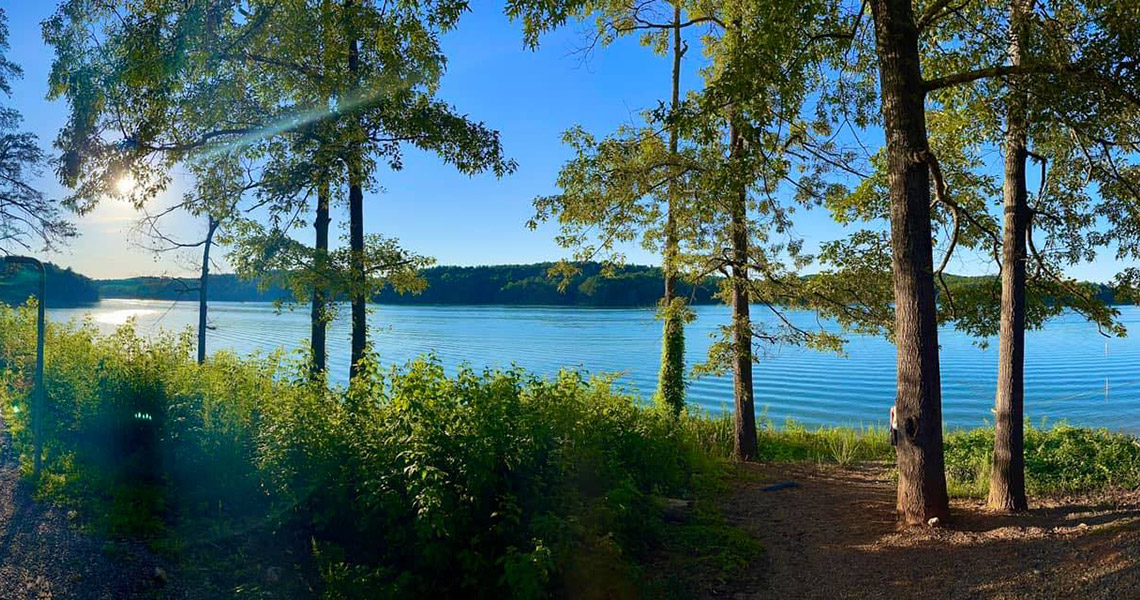 W. Kerr Scott Dam & Reservoir: Constructed in the early 1960s, this man-made lake offers camping, outdoor recreation, and education. The Visitor Assistance Center and the Environmental Education Center feature exhibits on environmental issues and natural resources, including one where kids can crawl through a replica beaver dam. Visitors can see a real beaver dam from the Overmountain Victory Trail, which extends 13 miles past a swimming beach, wetland habitats, and waterfalls.

Yadkin Pee Dee River Trail: This 125-mile paddling trail begins in Wilkes County and heads east. Two access points, the Tailwater Access in Wilkesboro and the Smoot Park Access in North Wilkesboro, allow paddlers to put in canoes or kayaks. Visitors can even go “tubbing” by renting giant washtubs to float down the river. 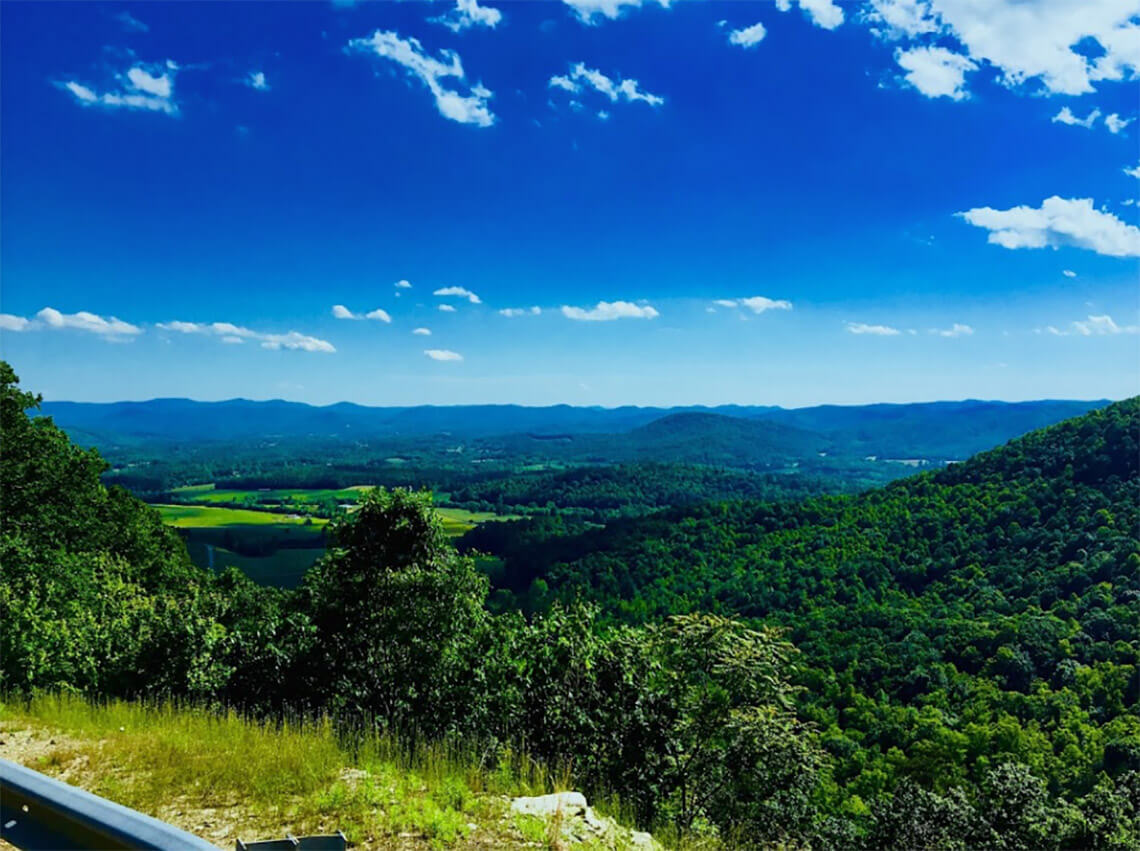 Check out the views from Rendezvous Mountain. Photography courtesy of EXPLORE WILKESBORO

Rendezvous Mountain: This Educational State Forest — and future state park — teaches visitors about the forest environment with an exhibit on early logging practices; a “talking tree” trail, in which the trees have recorded messages about themselves and the forest; and the four-mile Amadahy Waterfalls Trail.

Stone Mountain State Park: The 600-foot granite dome that tops Stone Mountain is the key feature of this state park, which also offers 18 miles of hiking trails, plus camping, trout fishing, and rock climbing in designated locations. Views include the 200-foot Stone Mountain Falls, the Devil’s Garden Overlook on the Blue Ridge Parkway, and the Blue Ridge escarpment. 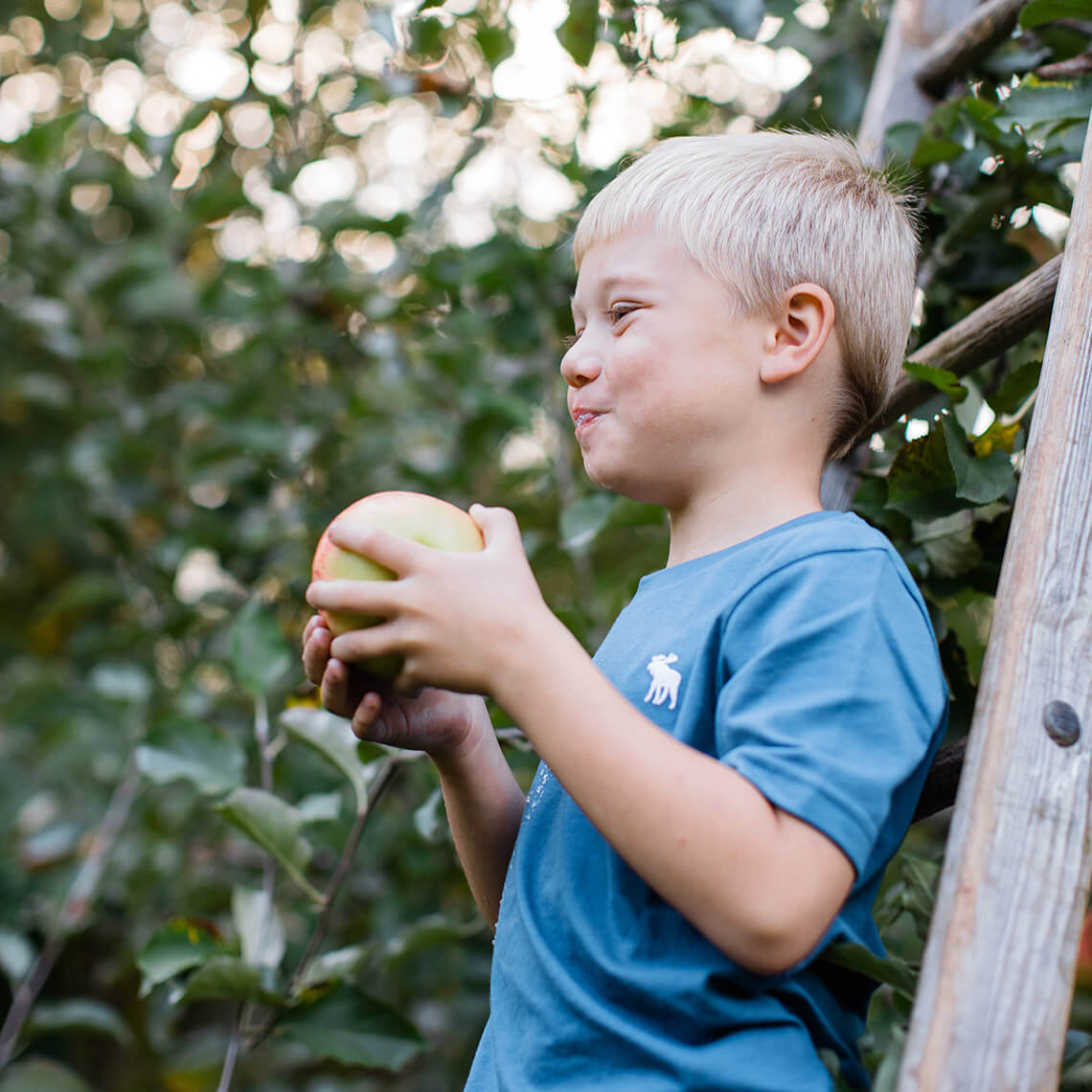 Pick your own apples at Perry Lowe Orchards. Photography courtesy of EXPLORE WILKESBORO

Get a taste for Wilkesboro.

Brushy Mountain Peach and Heritage Festival: On the fourth Saturday in July, head to downtown Wilkesboro for this annual festival featuring local artisans and fruit growers. Browse homemade craft goods and homecooked food, listen to live gospel and bluegrass music, participate in a knife-making demonstration, and shop for peaches from heritage orchardists or peach butter made on-site during the festival.

Apples: With a cool mountain climate, Wilkes County is prime for apple growing, making it second only to Henderson County for the most apples produced in North Carolina. “There is a rich history of growing apples in Wilkes County,” says Perry Lowe IV, a sixth-generation apple grower at Perry Lowe Orchards. “We get the fall temperatures that help apples ripen and color.” September through November, Perry Lowe Orchards offers you-pick apples, but at other times of the year (save for mid-May through June, when the store closes), you can buy apples, peaches, homemade apple cider — in fun varieties like Pink Lady and Honeycrisp — and even apple cider slushies.

Late August through December, stop by the apple house at Tevepaugh Orchards, a fifth-generation apple grower, for varieties like Jonagold and Stayman Winesap. And every autumn, the annual Brushy Mountain Apple Festival in North Wilkesboro features hundreds of artisan crafts, live music, and, of course, apples, apple cider, and dried apples from local growers. 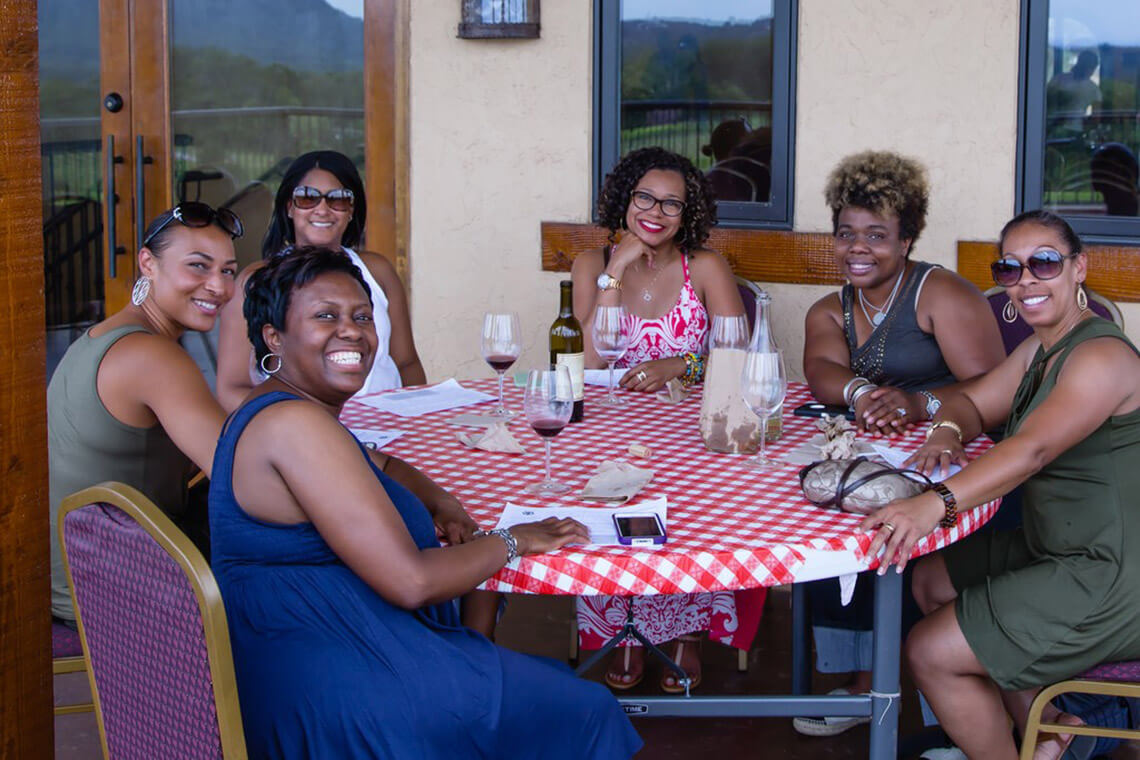 Wineries: The mountain conditions are also perfect for growing grapes, as you’ll discover when you check out the area’s wineries. Piccione Vineyards grows more than a dozen French and Italian varietals and makes 12 to 15 wines, many of which can be enjoyed at their tasting room with breathtaking views of the Brushy and Blue Ridge mountains. At Raffaldini Vineyards, try a dry Italian wine from the luxury of a Tuscan-style villa. Or stop by Stardust Cellars in North Wilkesboro for wines that are made off-the-grid using foot stomping and basket pressing extraction. Stardust is also a great place to catch live music on Friday nights from March through October.

Distilleries: Copper Barrel Distillery and Call Family Distillers both use a steam-injection distilling process. “That’s a Wilkes County thing,” says Brian Call, owner of Call Family Distillers and a seventh-generation moonshiner. “Every region’s got different types: Virginia’s known for their submarine pot stills. Tennessee’s known for their copper pot stills. Wilkes County was known for their steam stills.” Steam makes for a smooth moonshine because there’s no risk of scorching the liquor, Call says. At Copper Barrel, take a tour of the distillery and see a steam still for yourself. At the end of your tour, sample flavors like White Lightning or Red Cherry, then head over to Call Family Distillers to try Willie Clay Call’s The Uncatchable moonshine — named for Call’s dad, deemed “The Uncatchable” by revenuers — or The Reverend’s Forbidden Fire Cinnamon Liqueur. 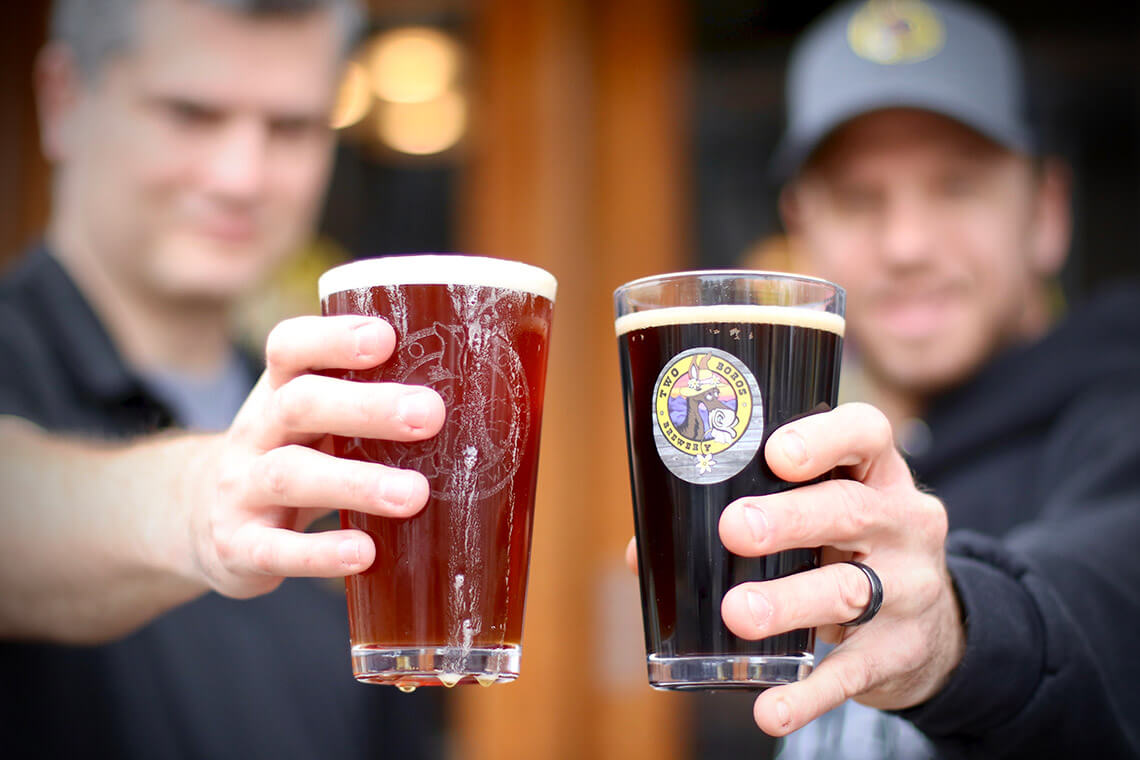 Restaurants: At Brushy Mountain Smokehouse and Creamery in North Wilkesboro, pork butts, chicken, and ribs are slow-cooked over hickory logs. Finish your meal with handcrafted ice cream, made in-house with heavy cream churned into 70 rotating flavors.

In downtown Wilkesboro, sister restaurants Dooley’s Grill & Tavern and TwoBoros Brewery face each other across East Main Street and are both owned by restaurateur Seth Cohn. TwoBoros offers woodfired brick-oven pizzas with house-made sauces and doughs, plus sandwiches and rotisserie wings. Cohn sends the grains that the brewery uses to brew its beer to nearby farmers, who feed it to their pigs and then make sausages that TwoBoros uses on its pizzas.

TwoBoros beers are also served at Dooley’s — housed in the historic Smithey Hotel — along with other local brews. Dooley’s serves up burgers and sandwiches, and homemade desserts like the Brushy Mountain Apple Pie made with, yes, Brushy Mountain apples. On any given weeknight, you might catch a local musician playing on the corner outside.

Blue Ridge Craft Trail: Western North Carolina is known for its abundance of artisans, and many of their works can be found in and around Wilkesboro on the Blue Ridge Craft Trail. Wilkes County Hardware, which has been in business since the 1940s, dedicates the front section of its store to products made by area crafters. “It’s a part of our unique culture,” says Angela Searcy, who owns the store with her husband, Richard. “A lot of our customers like to have a connection to something that’s handmade, made in North Carolina, and locally sourced.”

Taupe Gallery in North Wilkesboro showcases artists from around the country, many of whom are based in western North Carolina. Local works include those by palette knife painter Christie Younger, who works in a studio across the street from the gallery; Avery County potter Tim Turner; and Wilkesboro stained-glass artist Susan Roath, whose studio is also on the Blue Ridge Craft Trail, open by appointment.

Wilkes County Barn Quilt Trail: Take a scenic drive through rural Wilkes County to 16 locations where centuries-old quilt patterns are painted on barns and visible from country roads. The project is the result of efforts by the Wilkes County Quilters Guild, which seeks to preserve the heritage of quilting, and the Cultural Arts Council of Wilkes. 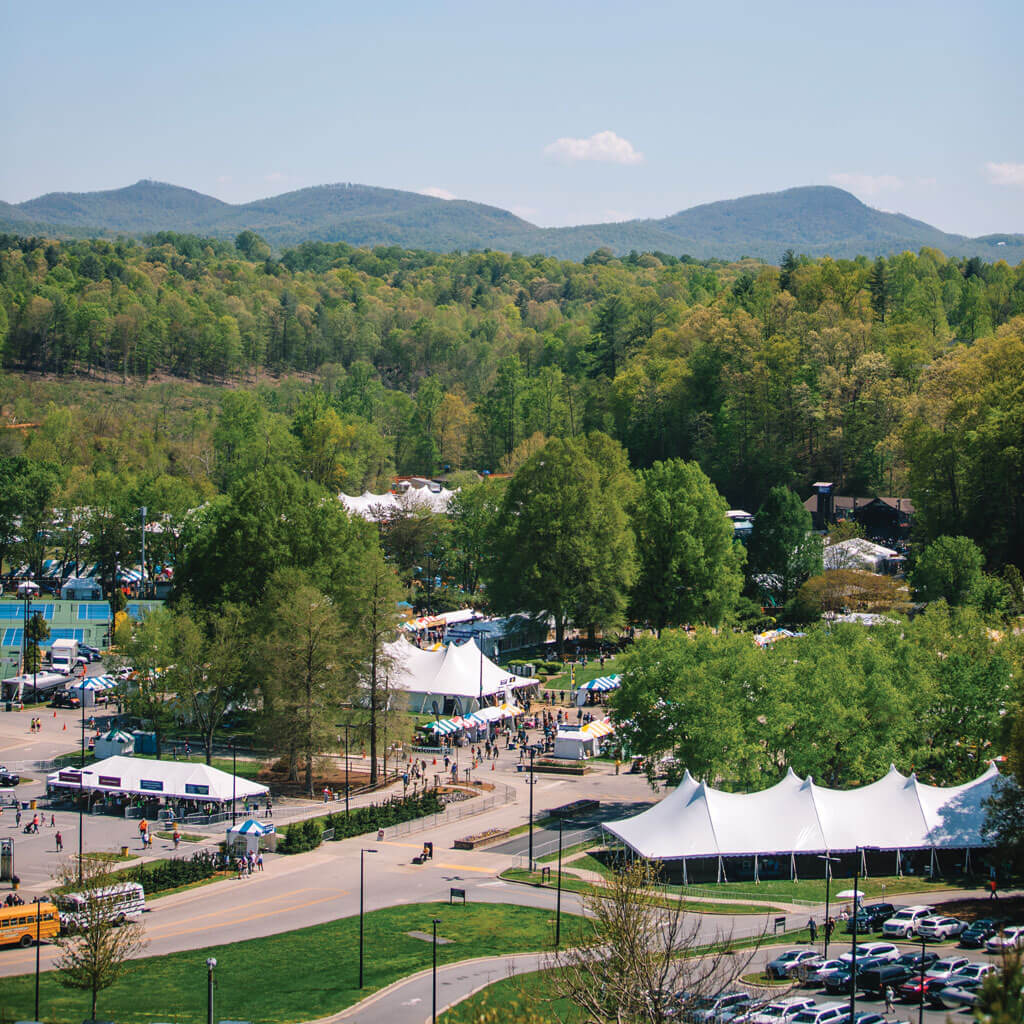 The four-day MerleFest has always been a family-friendly event, with food vendors, open jam sessions, music workshops, and concerts spread across 150 acres. County schools reward successful students with a day at the festival, free of charge. photograph by Revival Creatives

MerleFest: Every April since 1988, Wilkes Community College has hosted a traditional Appalachian, roots-oriented music festival — now expanded to include other music genres — in memory of Doc Watson’s son, Eddy Merle Watson. Today, the event features more than 100 musical artists on 13 stages over four days and draws crowds of 80,000 attendees, many of whom bring their own instruments to participate in picking sessions at camps around the festival.

Carolina in the Fall: Hosted by the Kruger Brothers, this annual food and music festival kicks off the fall season each year. Bands from around the world flock to Wilkesboro to treat festivalgoers to traditional-style American music, while food trucks compete for a championship trophy.

Wilkes Playmakers: Housed in the historic 1913 North Wilkesboro School, Wilkes Playmakers seeks to entertain and promote cultural awareness through theatrical performances and other community programs. The organization teaches classes for all ages and experience levels on all things theater-related.