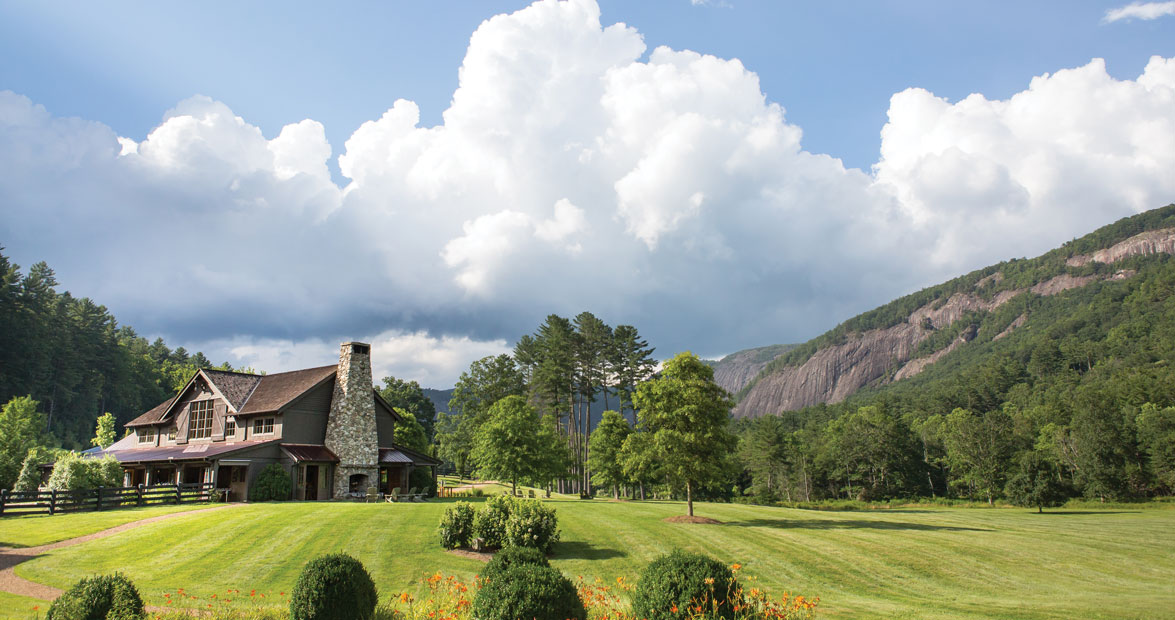 The scenic two-lane road to Lonesome Valley corkscrews so tightly that a GPS thinks the car is making turns, not banking curves. On the edge of another swerve, a sign pokes out of Nantahala National Forest, marking the entrance to a drive that wends over a couple more rolling hills to a spot unseen, and unimaginable, from the highway. If you arrive at dusk, around dinnertime, you hear Canyon Kitchen before you see it: distant laughter and chatter carried on the breeze — people having a lively supper, delighted by their good fortune to be gathered in such a beautiful spot. The porch lights and glowing windows of the restaurant, housed in the Jennings Barn, seem to beckon, Come in. Come in.

But if you arrive during the day, you might not hear anything, no matter what’s going on, because nothing can compete with the sight of the 1,400-foot stone edifice that serves as the soaring backdrop of the restaurant. Canyon Kitchen is part of a development in an area known as Lonesome Valley, situated midway between Sapphire and Cashiers. Laurel Knob soars above the valley, which has two other steep sides that combine to make it the largest box canyon east of the Mississippi River. It’s a singular site not only in the North Carolina mountains, but also in the entire length of the Appalachian chain. As the expression goes, you have to see it to believe it.

There’s only one road in and out, and guests catching a first glimpse of the canyon (which one might expect to see in Yosemite, not Jackson County) are wonderstruck. “The first time I pulled into the valley, I thought the view was unreal — as in, it wasn’t actually real. It seemed like a set out of a movie,” laughs Sarah Jennings, Lonesome Valley’s special events and marketing director. Jennings not only works on the property, she also lives there with her husband, Richard Gundry Jennings IV, and their children. And yet, she says, “the beauty and magnificence of this place still surprise me every day.”

Millions of years ago, granite walls heaved upward to form this canyon, a prehistoric view that is framed for diners at every turn. On the veranda that spills out behind the restaurant, guests take in the sweep of it — the canyon, gardens, forest, and meadow — a gallery walk of living landscapes. Inside, tall windows capture the closest rock face — called Cow Rock Mountain for its natural cow-shaped outline — as it darkens with the evening sky. The romp of shadows created by mercurial mountain weather ensures that we never see the canyon the same way twice.

Private estates and home sites dot the property, which has been called Lonesome Valley since the 1950s; the name makes reference to local lore about a hunter who endured a cold, lonely night in the dense virgin forest before he made his way out. The Jennings family’s connection to the land begins even earlier than that, though: In 1895, family patriarch E.H. Jennings and several industrialists from Pittsburgh purchased 35,000 acres in the Highlands-Cashiers Plateau to log the timber as an investment. Tracts were sold over the years, and in the 1940s, grandson Richard Jennings Jr., a Yale-educated engineer, became the first family member to see Lonesome Valley as a place to put down roots. Determined to preserve the remaining 800 acres, he built a family homestead and, along with his three children, Dick, Binford, and Sally, started a series of family-run businesses, including Sunburst Trout Farms, which continues to operate from its headquarters in nearby Waynesville.

When it was time for the children to take over, they realized that change was inevitable. So, to preserve their father’s commitment to the land, they decided to allow development, but only if they could oversee it themselves. In 2005, a private, gated community with stately homes cropped up across Lonesome Valley. The recession in 2008 forced the family to regroup again, just as they had in generations past, to keep the land — and the remarkable view — in their own hands. To that end, Sally Jennings Hudson and Chef John Fleer (now the chef and owner of Asheville’s acclaimed Rhubarb) decided to transform the barn, which had been built as a rec center for the development, into a destination restaurant showcasing farm-fresh ingredients from local sources.

Open only a few days a week and serving a set menu that changed daily, Canyon Kitchen launched on Memorial Day 2009. The remoteness of the location, the surrounding beauty, and the emphasis on farm-to-fork at a time when that trend had not yet become a national movement brought curious diners wending through the hills, as though on a culinary pilgrimage. Soon enough, the once-
lonesome valley had a new crop of admirers.

Canyon Kitchen started small and has grown to now serve as a neighborhood gathering place, a favorite stop for people living in nearby communities, and a special dining spot for Jackson County tourists. Even the kitchen boasts a million-dollar view. Each chef who has worked in it has drawn inspiration from the landscape, elevating Appalachian ingredients in lovely new ways.

Today, the menu is in the hands of Executive Chef Ken Naron, who has worked in the Cashiers area for years. In keeping with the original restaurant’s philosophy, his dishes feature seasonal ingredients at their peak from mountain farms and orchards. “We can’t raise everything we need, so we cultivate relationships with those who can,” Naron says. “Cooking requires relationships.” 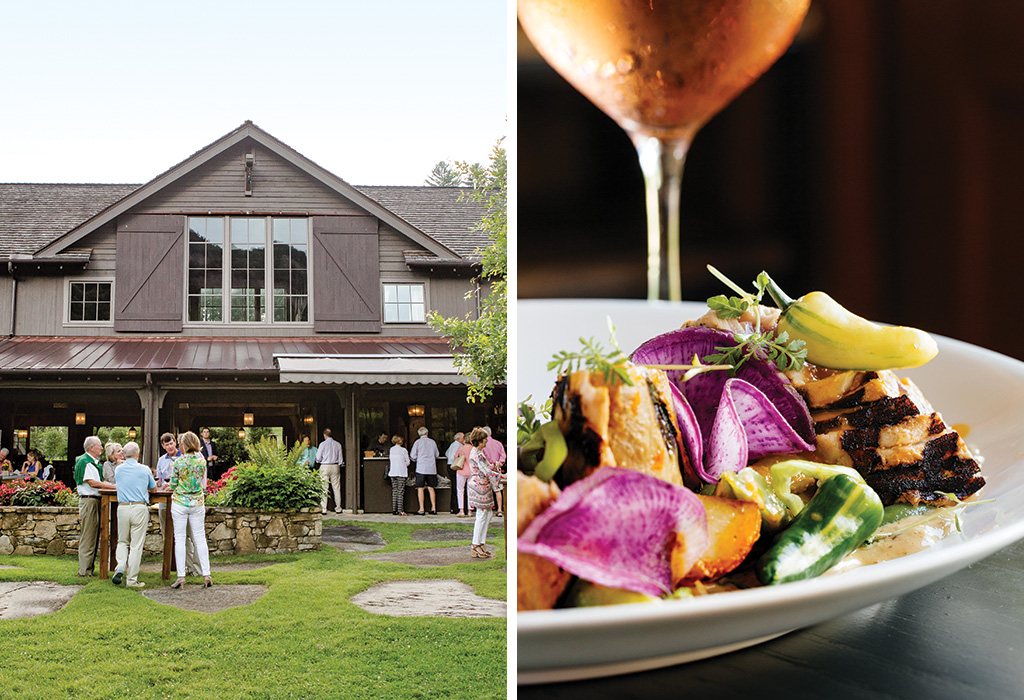 Guests mingle on the patio behind the restaurant, where seared tuna with local radishes and peppers makes a summer appearance. photograph by Tim Robison

He and his staff can harvest a few things, however, from a small kitchen garden that’s only a few steps from the back door of the restaurant. Guests are encouraged to stroll along the rows as part of their visit. Fragrant herbs and vegetables tumble out of raised beds and containers, including repurposed 1950s-era trout raceways and water troughs, vestiges of the trout farm years. For Naron, the act of gardening is a form of planning for the future, as is putting up the homemade pickles, vinegars, and preserves that stock his larder. Rows of jars holding jewel-colored veggies offer a reminder of each season in Lonesome Valley. “There’s no use preserving something if you don’t believe in a future where it will be needed and used,” he says.

The original Canyon Kitchen menu offered a slate of dishes selected by Chef Fleer — no choices (not that any were needed). Subsequent chefs tweaked the restaurant’s approach to reflect their own culinary vision, and the menu has expanded a bit. Naron’s prix fixe menu changes often, but a few items, such as the fried okra chips and Sunburst trout, make frequent appearances.

To eat at Canyon Kitchen is to feel like a dinner guest at the Jenningses’ home. It’s an invitation to be part of a family legacy, too. Faces of earlier generations, rendered in oil portraits, keep watch over the stairs. Warm chatter and high laughter rise to the rafters as the view outside fades into the dark, starry night. The dining room is tall and airy, with sturdy oak beams running the length of the room, holding up the ceiling as though it were a canopy. Huge barn doors slide and swing open to reveal a broad yard that seems to lead right to the foot of the box canyon walls. On the lawn, lightning bugs bedazzle the darkness at knee level.

Before and after dinner, guests gather at zinc-topped tables on the patio. Here, the lowest limbs of the trees planted along the perimeter are trimmed so that they frame the canyon view from the dining room, rather than block it. On warm days, mountain breezes waft through. On cool evenings, patio heaters glow and the large outdoor fireplace is ablaze, playing to an audience seated near the hearth or taking a stroll. Sarah Jennings says she hopes that all these special touches give the restaurant longevity, so that future generations might discover the canyon. “Because,” she says, “there is no more beautiful place in the world.”