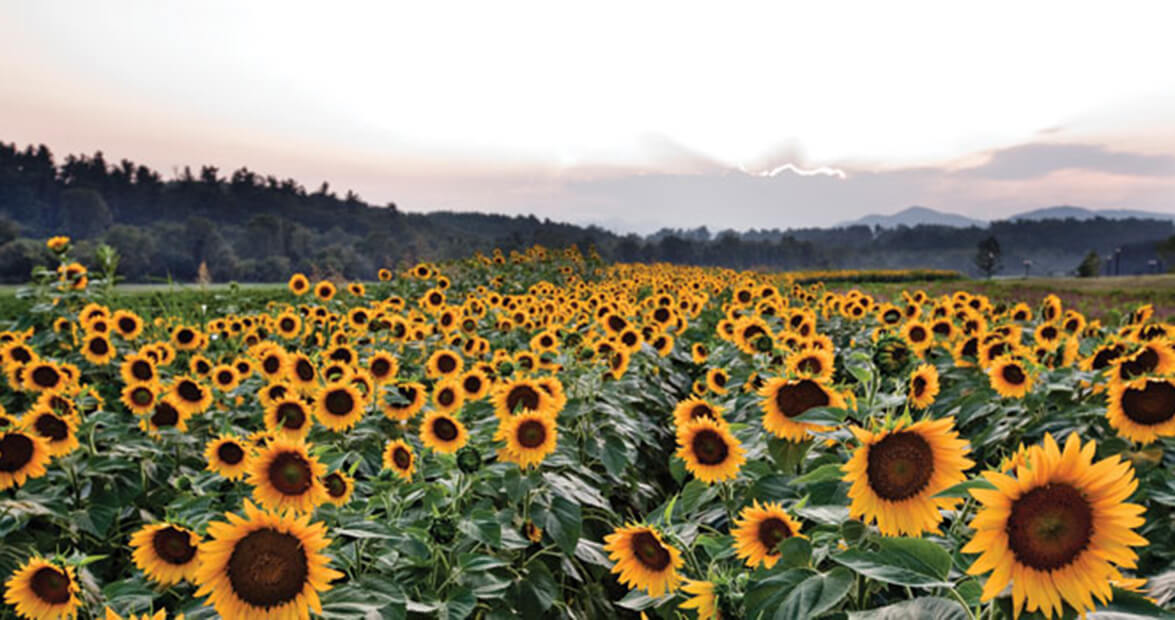 They arrived by container ship at a Virginia port, thousands of bulbs dug from Holland’s loamy fields. Nestled in crates, stacked on pallets, and wrapped with plastic sheeting, they were loaded onto a truck and driven west, across the Blue Ridge and on to their final destination, the Biltmore Estate in Asheville.

That was early November, when the soil temperature was right, a consistent 50 degrees, when the days were moderate and the nights cool. Plans were consulted, beds marked off. With a power auger and strong shoulders, gardeners planted the bulbs, six to a hole. It took two weeks to finish the job.

All of it led to this moment, a sunny day in mid-April. Here are the tulips, tens of thousands of them, proud little cups held above frosty green stems. They stretch in regiments of yellow and red, peach and midnight purple. They are stunning.

“People have high expectations for this place,” says Travis Murray, garden crew leader at the Biltmore Estate’s Walled Garden, where, if history is any guide, roughly 60,000 tulips will bloom this spring. “Of course,” adds Murray, “we always try to satisfy them.”

The Biltmore Estate’s Festival of Flowers, which begins April 3 and continues through May 16, will celebrate its 25th consecutive year this spring. The festival is a chance for the estate to shake off the winter doldrums, to showcase its impressive gardens, and to herald a new season of tours, concerts, and special events. Above all, the Festival of Flowers is a way to honor the work of Frederick Law Olmsted, who was hired by George Vanderbilt to lay the plan that would, in the 1880s and 1890s, groom an expanse of woods and overgrazed pasture into one of the nation’s most cherished landscapes.

“His inspiration is still here,” says Susanne Woodell, manager of the estate’s historic gardens. “The backbone of Olmsted’s vision is in every one of these gardens.”

The acknowledged “father of Landscape Architecture” in the United States, Olmsted’s prior achievements included designs for Manhattan’s Central Park, Brooklyn’s Prospect Park, and Chicago’s Marquette Park. His plans for the Biltmore Estate were the last major effort of his career.

His involvement with the project began early. In fact, plantings were made in the estate’s Shrub Garden well before the great house’s first floor was even finished. Olmsted’s desire was to blend the charm and formality of the best English gardens with the natural appointments of the North Carolina mountains.

While it’s no use second-guessing a master, in the case of the Biltmore’s Walled Garden, it’s clear that even Olmsted could make mistakes. His original goal for the granite-enclosed location was to create a working garden of vegetables, herbs, and ornamentals. Luckily, Vanderbilt said no, and today, instead of cabbages and peas, we have grape hyacinths, narcissus, daffodils, and the hard-to-ignore tulips. After the bulbs come out, the estate’s 25 historic gardeners busy themselves installing late-spring annuals here, a Fleur de Lis pattern of pansies, verbenas, snapdragons, and Dusty Miller.

“We try to go with time-tested plants, to make sure they’re all ones we know will perform in our climate,” says Murray. “We’ve got old favorites, like the single late tulip ‘Big Smile.’ It’s reliable, and everybody loves it. But we also get to use our imagination a little bit, especially in the trial gardens that we plant each year. We get to play mad scientist out here, too.”

In fact, preparations for the Festival of Flowers begin two years ahead of time. For the bulbs and annuals, patterns are chosen and color schemes are worked out. And well prior to the event, every shrub and vine on the premises has been pruned in a way that coaxes the best show of blossoms. “They’re simple things that most people don’t realize the need to be done,” says Murray. “They’re the technicalities that we have to keep up with.”

Spring weather — notably fickle in the mountains — also must be contended with. “When everything’s looking great I get to gloat,” Murray says with a smile. “But when there’s a frost warning, you better believe it — I’m running around here like a chicken with his head cut off.”

While the Biltmore’s four-acre Walled Garden is the unchallenged centerpiece of the Festival of Flowers, it is just a portion of the attractions. With a scale and quality to rival any in the world, the Biltmore Estate’s historic gardens stretch across more than 80 acres and take in nearly every kind of terrain, from the table-top formality of the Italian Garden, with its showy lily ponds and long views to George Vanderbilt’s storybook chateau, to the woodsy ramble of the Azalea Garden, where trails lead walkers across stone bridges and past mossy nooks lined with choice native plants. All of it is worth seeing, and all of it is at its very best in the mild days of spring.

Spring arrives first in the estate’s glass-roofed Conservatory, where mop-head and lace-cap hydrangeas, Asiatic lilies, paper-white narcissus, cyclamen, primroses, and amaryllis are already in bloom. In late winter, gardeners “force” hundreds of daffodils and hyacinth bulbs for the sake of the show, chilling them first and then coaxing them to bloom by planting them in the Conservatory beds, where the temperature is kept a moderate 68 degrees.

Outside, the first places to show color are the Spring Garden and Shrub Garden, whose paths are lined with spiraea, Forsythia, yellow bell, redbud, and deciduous magnolias. By early May, the estate’s 15-acre Azalea Garden is abloom with more than 1,000 native and hybrid azalea shrubs.

And the Festival of Flowers has its other, unsung pleasures, too, like the sight of the gardens’ Dove tree or “handkerchief tree” (Davidia involucrata) in flower. A cousin of our native gum tree, the rare species is native to China. In spring, its branches are festooned with blooms resembling wings of white tissue. Other striking exotics include the gardens’ Katsura trees, whose tender, young leaves smell remarkably like cotton candy.

“This is a place of constant change in the spring,” says Woodell. “Every day, something new is unfolding. You may think you’ve seen it all, but trust me — there are plenty of reasons to come back, again and again.”