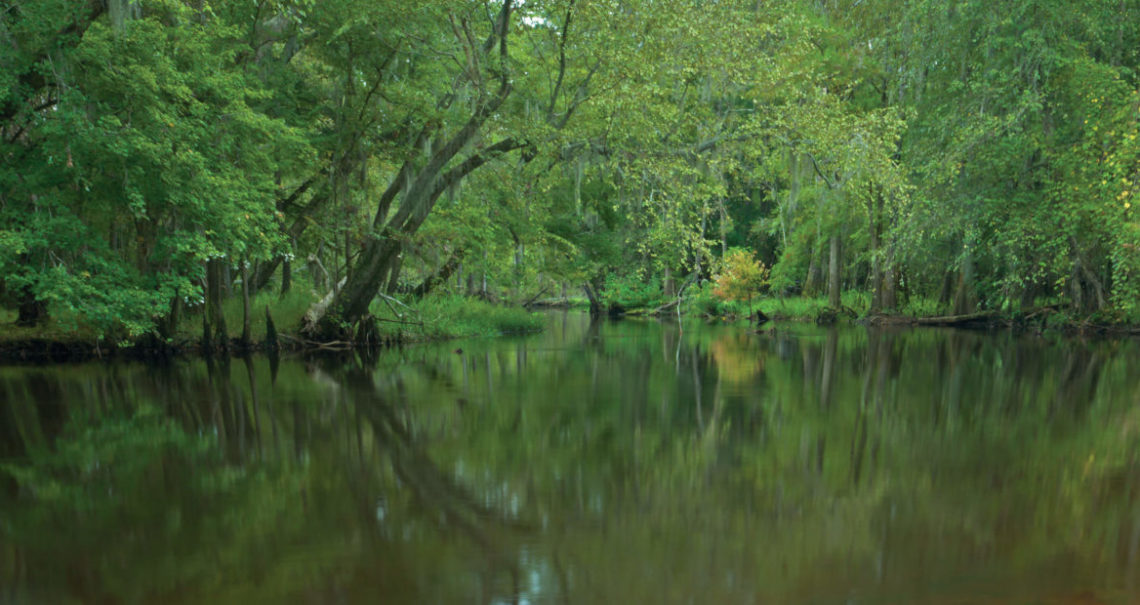 The morning sky is cobalt blue, growth bald cypress trees I’m planning to photograph along the Black River. From the river’s beginning at the confluence of Great Coharie Creek and Six Runs Creek in southern Sampson County, to where it empties into the Cape Fear River some 14 miles north of Wilmington, the Black flows only 70 miles.

I could paddle its entire length in two days, but why would I want to? I pick out five- or 10-mile sections and explore them over a few days. A trip in November is among the longest I’ve made on the Black — 20.5 miles from Ivanhoe to Hunts Bluff below the N.C. Highway 11/53 bridge. Short trip or long, a journey down the Black is always an excursion into majesty.

Although not immune to the development pressures most North Carolina rivers face, the Black River is largely unspoiled. The waterway has two characteristics going for it: It flows faster than most Coastal Plain waterways, so it sheds tainted runoff quickly; and large underground aquifers constantly recharge it with fresh water. In 1994, the state named the river an Outstanding Resource Water, a designation given only to the most pristine waterways.

From my vantage point about three feet above the river’s shimmering black surface, an effect created by the tannins in the water, I can’t see much of anything except for dense forest and the occasional house or fishing shack on the riverbank. Overall this region is still sparsely developed. But less than a quarter-mile into my trip, I pass a new house on the riverfront. Since my first Black River trip in the late 1980s, I’ve witnessed several new homes going up on the river and other development within the river corridor. They worry me.

But I take heart in the fact that a growing number of nature preserves and conservation easements have been established to protect the river and the forests that line it. Soon after my first trip on the Black River, in 1989, Nelson and Ethel Squires donated a 27-acre conservation easement to the North Carolina Nature Conservancy. Since then, the conservancy has protected some 14,000 acres along the Black and its tributaries through easement or outright purchase. Several other groups, including the Coastal Land Trust and Friends of Sampson County Waterways, are working to protect the river and its forests.

I paddle about seven miles before seeing the first person, an elderly fisherman in a small johnboat. “It’s a beautiful day on the river, ain’t it?” he hollers out as I paddle by.

“Anybody that don’t like this is just plain crazy,” he states with conviction.

After passing under Beatty’s Bridge a few minutes later, I start looking for a campsite. I don’t bother with the left bank. Most of that land for the next several miles is part of Cone’s Folly (buying swampland has always been a bit suspect), a private wildlife preserve and timber operation established in the 1930s by Greensboro textile magnate Benjamin Cone. A local manager patrols the property and makes sure no one camps on it without permission.

I want a spot with a good vantage point, both for sunset this evening and sunrise in the morning. Because camping is restricted on nearly all of the property along the Black, I’ll settle for a place at water’s edge. I find the perfect spot at the end of a little spit separating the main river channel from a wide slough.

I don’t get much sleep. Every so often a beaver tail slaps the water. Great horned owls are hooting back and forth. Every 30 minutes or so, a flock of birds flies so close overhead that I can hear their wings flapping. Probably wood ducks; I flushed many of them while making my way along the river. As if the critters weren’t noisy enough, acorns constantly plop into the water. Believe it or not, this is the “quiet” season. In summer, the deafening chorus of cicadas and frogs drowns out the rest of the clatter.

Sunrise is just as I had hoped it would be. A soft fog drapes an ethereal shroud over the river and diffuses the rising sun. I spy beautiful compositions in every direction. And I’m about to paddle through my favorite part of the river, called Three Sisters Swamp. As I enter the Narrows, the entrance to Three Sisters, I have to negotiate around several trees lying in the river channel. It makes me wonder how a steamboat ever made it up this river.

Commercial travel on the Black River began as early as the mid-18th century with canoes, log rafts, and periaugers hauling cotton, lumber, naval stores, and livestock. After the Civil War, steamboats began plying the river, and commercial activity surged. According to an 1884 report, some 30,000 barrels of naval stores and 100,000 feet of lumber were transported on the Black River, and commerce on the river totaled nearly three-quarters of a million dollars.

By the late 1800s, however, the first railroad tracks were cutting into Black River territory, and within a few decades, river commerce was beginning to dwindle. Soon after World War I, railroads and roads eclipsed the river as a means for shipping cargo, and the last steamer on the Black River retired in 1926.

For nearly 100 years, the river has been left to nature, and its influence is unmistakable. At one point here in the Narrows, vegetation has so totally clogged the main river channel that it’s passable only during the highest of water flows. The only practical route is directly through Three Sisters Swamp along a confusing maze of braids that require more time dragging the boat over trees and sandbars than floating in it. That suits me fine. I’ll spend the rest of the day wading through Three Sisters taking pictures.

Three Sisters isn’t just any old swamp. Everywhere, bald cypress trees stretch toward the sky. The trees are enormous. But size doesn’t tell you everything about their age. Look at their crowns. On some, their flat tops look as if they’ve hit an invisible ceiling. These trees aren’t just old; they’re ancient. And somewhere in this swamp is a tree with a small metal tag bearing the marking “BLK69.”

That tree is the reason The Nature Conservancy began focusing on the Black River in the late 1980s. It’s why I made my first trip down the river and the only reason most non-locals even know the river exists. According to the scientists who discovered it, Dr. Malcolm Cleaveland and Dr. David Stahle from the University of Arkansas, the tree dates to at least 364 A.D., making it the oldest tree east of the Rockies. Cleaveland says many other trees in the same area are likely older, but core rot prevented the scientists from determining their exact age.

“BLK69 was solid all the way to the center, which makes it a very special tree in that respect, not in age,” Cleaveland says. “I would be willing to bet that there are trees close to 2,000 years old at that spot on the Black River but cannot prove it.”

After Cleaveland and Stahle informed the North Carolina Natural Heritage Program of their discovery, articles appeared in national publications and nearly every major newspaper in the state. The North Carolina Nature Conservancy took a new interest in the Black River, and that interest led to the first conservation easement of 27 acres, which incidentally, encompasses much of Three Sisters Swamp.

The tree’s newfound fame, however, didn’t thrill everyone. One waterfront landowner told me that as soon as people learned about Methuselah (as locals know the tree), traffic on the river increased dramatically. In her view, more people equals more problems.

But as I’m wading through the swamp in total awe of what may be the finest example of virgin forest in the state, if not the entire eastern half of the country, I wonder what would have happened had Cleaveland and Stahle not discovered the primeval tree. Would the Squireses have given their conservation easement? Would The Nature Conservancy have protected those 13,000 acres? Would I be out here today? Probably not.

The Black River flows through rural southeastern North Carolina, north of Wilmington. Several resources can help you get on the river.

Paddling Eastern North Carolina by Paul Ferguson (2007 Pocosin Press), an excellent book for people planning to paddle the river on their own, offers detailed information on each of the public access points as well as a couple private accesses that charge a small fee.