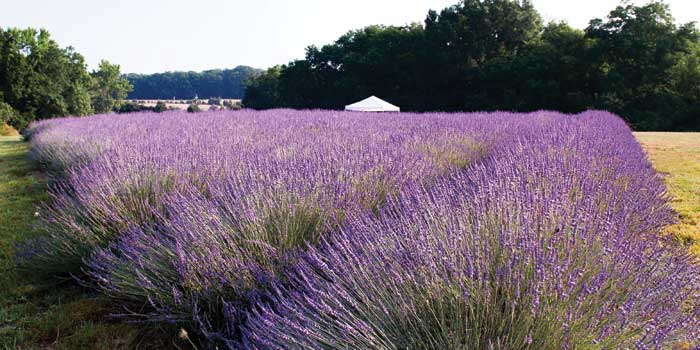 Architects don’t worry much about smell. It’s the one detail they can’t plan.

Most new buildings smell of sawdust and paint. But those sterile fumes of uniformity fade quickly, and the building takes on the smell of its purpose.

These traits don’t show up on the blueprint. But what people remember most after they leave a building isn’t what it looked like or what it sounded like. They remember what it smelled like.

Norma Burns, the architect, never worried much about smell. She controlled everything she could: foundation, functionality, aesthetic. Smell never seemed to matter.

But when her foundation shook, her functionality shifted, and her aesthetic changed, she surrounded herself with that one detail that she could never plan.

Norma Burns, the gardener, lives in a farmhouse in Bennett that smells like lavender. It’s a complicated smell, reminiscent of cedar, turpentine, and strong aftershave.

Norma Burns is a complicated woman.

She moved to these 13 acres in 1999 with her husband, Robert. They bought the land because it was 25 minutes from their daughter in Southern Pines. After careers as architects in Raleigh, the couple wanted to retire someplace simpler, someplace closer to the grandchildren, someplace with room for Robert and Norma to grow things and continue to grow their life.

They chose one of those in-between places in the southwestern corner of Chatham County. Harper’s Crossroads is the closest landmark. A Phillips family must have owned this land years ago because the road names read like a family tree: Clarence Phillips, Claude Phillips, Calvin Phillips.

Today, the mailbox at 421 Clarence Phillips Road reads: Bluebird Hill Farm. The dirt driveway is steep and curvy, and it washes out when it rains. At the top of the hill, Norma walks through a one-acre field of lavender plants. This time of year, right before the harvest, the plants are deep purple.

Lavender plants send up a stem, and the flower blooms right at the top. The time to harvest lavender is short, only about two weeks. You want to catch it just before the flowers fully open, when they’re still buds. If you wait until the flowers come out, they turn brown and fragment. Those fragments aren’t useful for anything. But those buds make fragrant sachets and soothing teas.

As a seed, lavender is unreliable. The tiny seeds have a low germination rate. So when Norma decided to set out 500 lavender plants in 2006, she ordered young plants rooted from branches, not seeds.

A paper hangs in Norma’s kitchen, and she walks past it a dozen times a day — “21 Suggestions for Success.” Number one on that list is marry the right person.

Norma found that person. She and Robert built their 32-year marriage on a foundation of shared interests and passion. They planned their retirement together. They had a clear vision for their future.

Robert and Norma took a trip from Bennett to Raleigh. They drove separate cars. Norma in front, Robert behind.

Norma stopped at the stop sign at Old U.S. Highway 421, looked both ways, and crossed. Then she checked her rearview mirror. She saw Robert stop at the stop sign, look both ways, and then look down. She saw him roll into the intersection. And then she saw a red pickup truck knock his Honda Civic hatchback off the road. She knew right then that the impact was too strong for him to survive.

“The worst thing about losing someone that has been a part of your life for so many years is that your whole identity is wrapped up in being a part of that person,” Norma says. “You’re not just an individual. You’re a part of a partnership.”

Architecture was theirs. Robert and Norma met at the School of Design at North Carolina State University — she was studying there, and he was teaching. Their children chided them for their long, boring conversations that always involved architecture.

So in 2006, after the accident, Norma needed to find something that was hers.

As a child, growing up in Miami Springs, Florida, Norma enjoyed two things: building playhouses and landscaping them. The tropical climate allowed her parents to fill their yard with mangoes and coconuts, lemons and limes.

Norma still has seeds from those plants and grows them inside her house in big pots, but those are her parents’ plants, from a place where she no longer lives.

When her daughter worked abroad one summer in London, England, Norma asked her to bring back one thing: Yardley English lavender cologne.

Norma loved that smell. The complicated, woody aroma brought her comfort. It wasn’t a feeling she related to time with her parents, or with her husband, or with her daughter; it was something she enjoyed independently.

In early June 2006, Norma ordered 500 lavender plants and prepared a little plot on the other side of her pond. She put the last lavender plant in the ground on June 22. And it didn’t rain one drop until September 8. Every morning for two and a half months, she carried buckets of water up the hill and poured one cupful on each plant.

Her neighbors watched with skepticism. Here was a city girl moving to the country, growing fancy plants in red-clay soil, trying to function by herself in a close community where everybody had known everybody else for generations.

“Well, we weren’t sure about you,” Calvin Phillips told her. “But we saw you out here sweatin’ and figured if you worked this hard, you must be OK.”

Norma won’t tell you her age. She used to brag about it, but she says you reach a point when your age becomes a liability. She might want to get married again one day, and she doesn’t want people judging her by a number.

Norma is tall, thin, and attractive. Her hair is blond — it might have always been that shade, but maybe not. Her eyes are brown. They’ve always been brown. She can freshen her hairstyle, put on new clothes, change her lipstick color, but her eyes will always be brown.

When Norma and Robert moved into this house, they changed several things about it.

The original structure was built as a log cabin in the 1700s. Before renovations, Norma could stand in the kitchen, put her hand on the wall, and feel a cold breeze coming through. When they removed the siding to add insulation, they discovered wood riddled with pine-beetle holes. The heart pine was still hard as stone, but the building inspector wouldn’t accept it. Robert and Norma saved one beam to use as a mantelpiece and honor the old structure.

They followed the original footprint of the house, but they expanded it on either end and raised the roofline. They covered the outside with vinyl shakes.

“It seems that the secret in all of this is to get the balance right,” Norma says.

In her career as an architect, Norma never developed a signature aesthetic design. Every building she created looked different because she always considered how the structure fit into the area around it, either to improve it or enhance it. Her farmhouse doesn’t look like other farmhouses on Clarence Phillips Road. But it doesn’t offend them either.

“I could have redesigned this building to be a modern structure,” Norma says. “But I felt that it was more important that it have some character, that it reflect the neighborhood.”

The one detail that Robert and Norma didn’t plan together was the house’s smell.

Norma had to do that on her own.

This June, after Norma and her new foundation of neighbors and friends harvest the lavender buds, she’ll bring the tiny, purple buds into her kitchen. She’ll find a function for every one — sometimes aesthetic, but always fragrant.

That complex smell of cedar, turpentine, and aftershave will seep into her kitchen, and her house will take on its smell of purpose — the smell of a place where a resilient woman grows something that is hers.

Lavender Harvest
June 2-3
Visit Bluebird Hill Farm to assist with the lavender harvest, and enjoy music and lunch on the grounds. Admission is free, but bring your own clippers and shears. If you plan to attend, RSVP by email to countrymouse@rtmc.net.

Leah Hughes is an associate editor at Our State magazine. Her most recent story was “Oyster Culture” (May 2012).