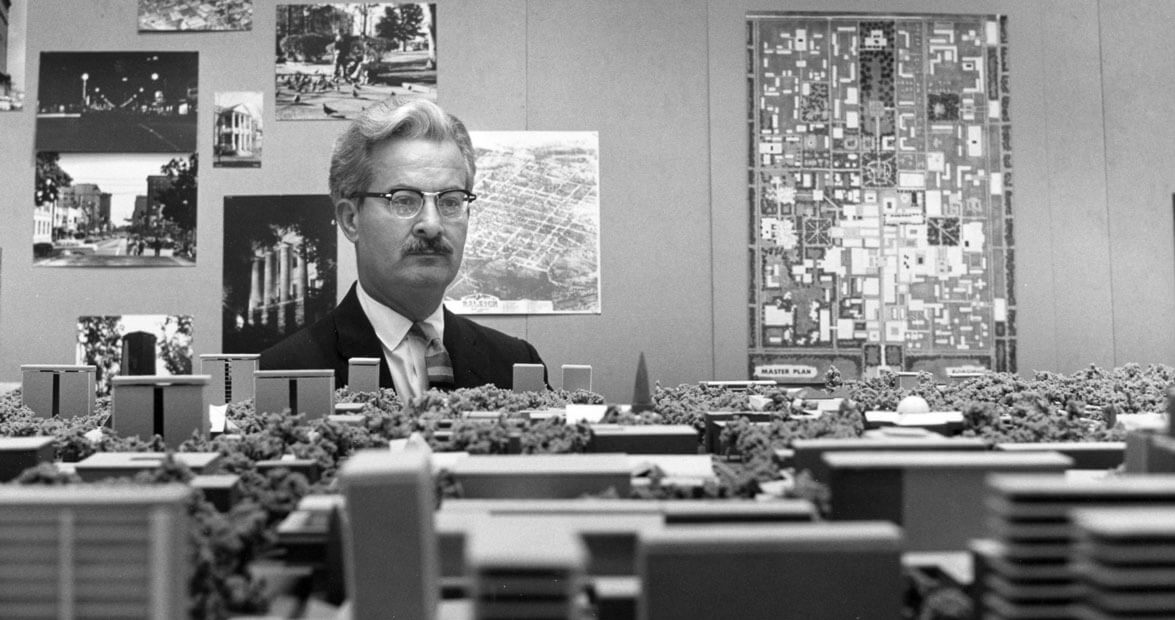 Henry Kamphoefner has been called a rock star, a cast-iron S.O.B., an incredible visionary, and an arrogant curmudgeon. He was a man with a hard and hardened persona, one of the most enlightened design educators of his time, and someone who changed the architectural landscape of North Carolina. It’s been 47 years since the founding dean of NC State University’s legendary school of design stepped down. But his legacy is still felt statewide — in the Triangle area alone, there are some 800 modernist houses — as architects continue to practice the modernist architectural orthodoxy Kamphoefner preached.

His tenure at State — from 1948 to 1972 — was a jolt to the complacency of traditional design philosophy there, and it wasn’t without controversy. Even today, there’s no shortage of opinions — both positive and negative — about the man who boldly altered the trajectory of modern architecture. “He was a combination of Frank Lloyd Wright and the Bauhaus, and that was indicative of the faculty he brought to the school,” says Durham architect Turan Duda, a 1976 graduate of the school of design. “They were educators first, but also artists, sculptors, industrial designers, architects, and landscape architects,” Duda says. “He wanted to expand the idea of what design is and what it could be.”

A rigid modernist and professor of architecture at the University of Oklahoma, Kamphoefner was recruited by NC State in 1947. He was no pushover. Retired NC State professor Roger Clark wrote in his 2007 book on him that Kamphoefner insisted on four discussions before he’d even consider the position of dean: He wanted the head of architecture replaced with “a man of national reputation.” He wanted one particular tenured professor’s resignation, and he wanted five other non-tenured instructors fired and replaced by six others — with a 60 percent salary increase. And he wanted space specifically for the new school.

“He wanted to expand the idea of what design is and what it could be.”

He got it all. By the fall of 1948, classes at the new school of design had commenced. Kamphoefner modeled his new program after Harvard’s graduate school of design, with a good dose of the interdisciplinary spirit prevalent at Black Mountain College near Asheville. Students were required to take a course in fine arts — either painting or sculpture — and to learn to plaster and lay brick. 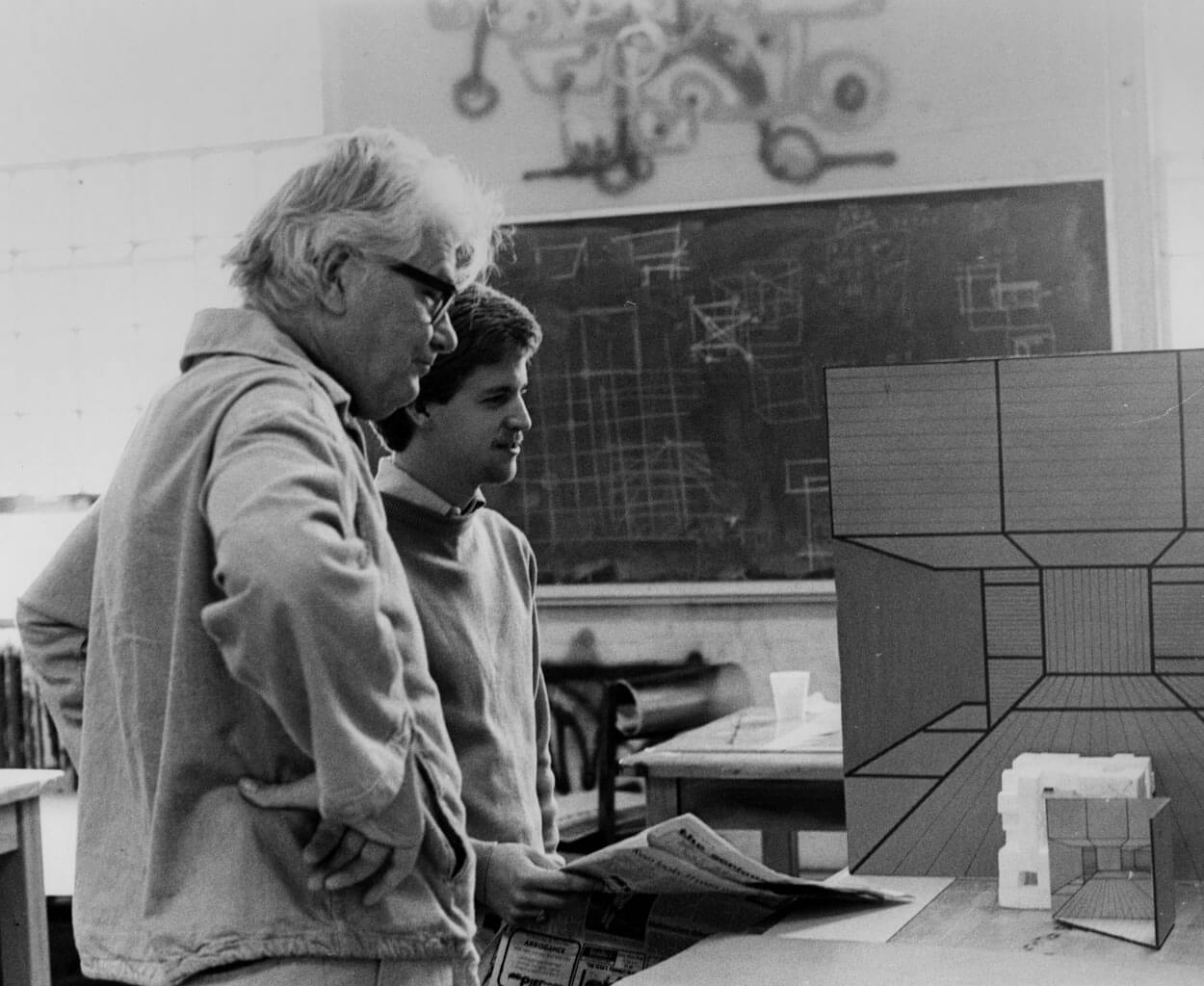 Lattices and spheres were often the focus of NC State design professor Duncan Stuart’s (left) work. He shared his passion for geometry with his students and collaborated with Buckminster Fuller on the creation of the geodesic dome. photograph by photograph ua023_024-001-bx0016-021-005, People collection (UA023.024), the Special Collections Research Center, North Carolina State University Libraries

Kamphoefner insisted that they all practice and teach. As a result, North Carolina boasts buildings that are standard-bearers of the modernist movement. There’s the Fadum house, designed in 1949 by Fitzgibbon, and multiple buildings by Milton Small, who studied with architect Ludwig Mies van der Rohe. Matsumoto’s exquisite Japanese-influenced homes are “as radically modern today as [they were] in 1955,” Duda says.

And, of course, there’s J.S. Dorton Arena on the State Fairgrounds, with its saddle-shaped roof supported by torqued steel cables. Designed by Nowicki, the structure is a direct result of the theories and practices that were being investigated at the school. When Dorton opened to the public in 1952, it was called the greatest building of its time.

One of Kamphoefner’s strokes of genius was to leave a single teaching position vacant and use its salary to fund visiting professionals who came to the school not just to lecture, but also to teach and socialize with students. Frank Lloyd Wright’s lecture in Raleigh commanded an audience of more than 5,000 people, a stunning turnout for a city of only 95,000 at the time. Buckminster Fuller, creator of the geodesic dome, and modernists Richard Neutra and Marcel Breuer visited, too. Mies van der Rohe came from Chicago to see the construction of Dorton Arena and to speak with students. According to legend, he downed martinis and smoked cigars with them in a walk-up apartment on Hillsborough Street. At the end of the night, he took a tumble down the steps and managed to keep walking, impressing the students all the more. 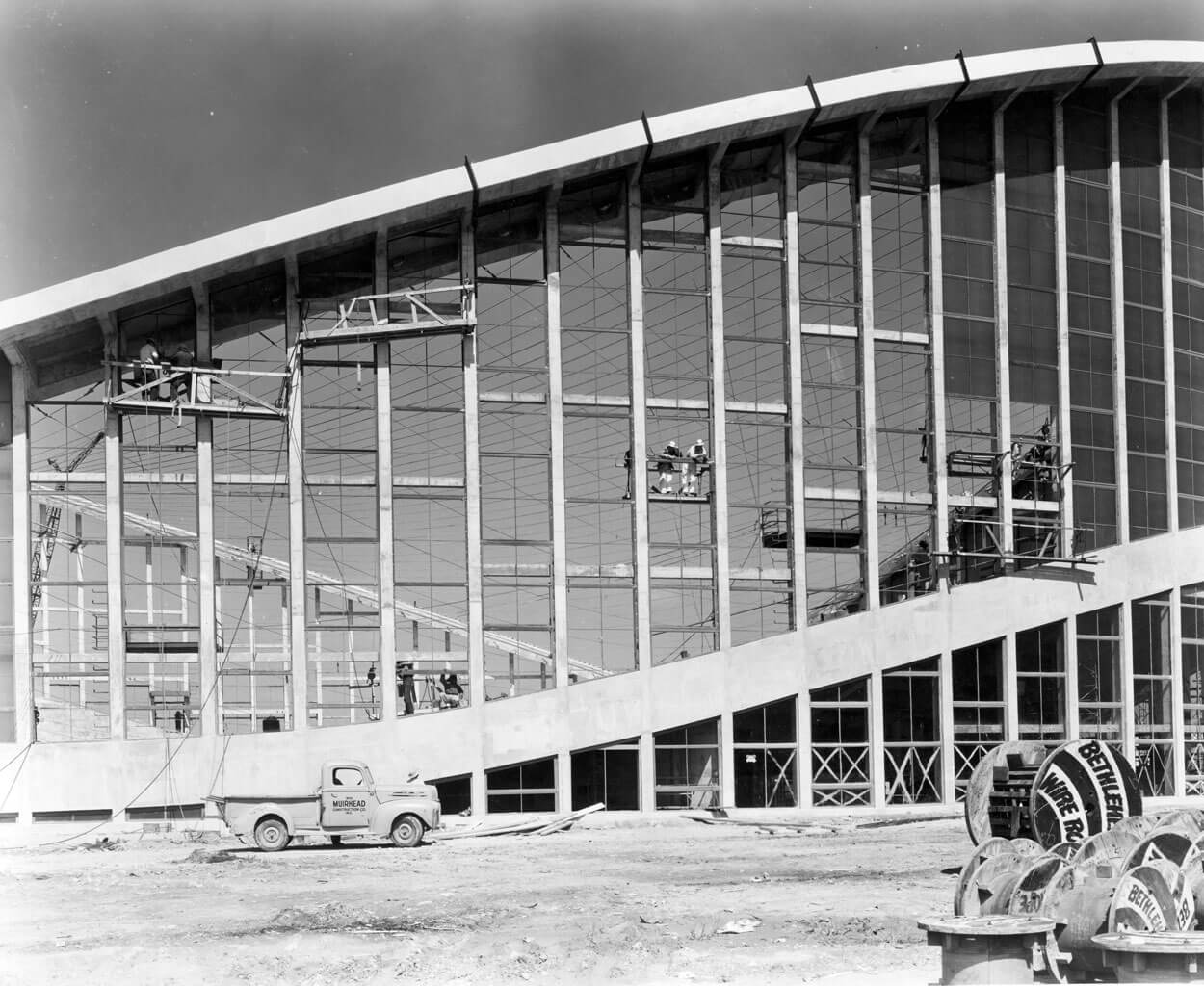 Built on the North Carolina State Fairgrounds, J.S. Dorton Arena was such a revolutionary design that it earned its architect, Matthew Nowicki, international acclaim when it opened in 1952. photograph by State Archives of North Carolina

“There could be no girlfriends and no sports once you were here — he was asking for full commitment.”

But Kamphoefner wasn’t welcoming to all talent. Raleigh was still a segregated city into the 1960s, and the school of design under Kamphoefner was no different. There were no African-American instructors, and the first black student did not arrive until 1966, when Arthur Clement was admitted. Burning the midnight oil while others around him dropped out, Clement got through his five years — bringing J. Max Bond Jr., the preeminent African-American architect, to visit the campus — and graduated in 1971. Still, he had to endure Kamphoefner’s lukewarm-at-best reaction to his presence whenever they met: “‘You’re still here,’ he’d say to me every year,” Clement recalls.

Kamphoefner held negative attitudes toward women in architecture, too. After Raleigh architect and attorney Theresa Rosenberg interviewed with the dean in 1961, her father asked her: “Why would you ever want to be somewhere where you know you’re not wanted?” But she knew what she wanted, and went on to graduate in 1971. “It never occurred to me that Kamphoefner was doing anything but his shtick,” she says.

Durham architect Phil Szostak, the architect for the Durham Performing Arts Center and Aloft Hotel, recalls talking to Kamphoefner as a junior in high school. “He said there could be no girlfriends and no sports once you were here — he was asking for full commitment,” Szostak says. More shtick? Perhaps. But anyone determined to sprinkle modern architects from Boone to Wilmington — and in just two generations, no less — couldn’t possibly abide flirting from his students, or even himself.