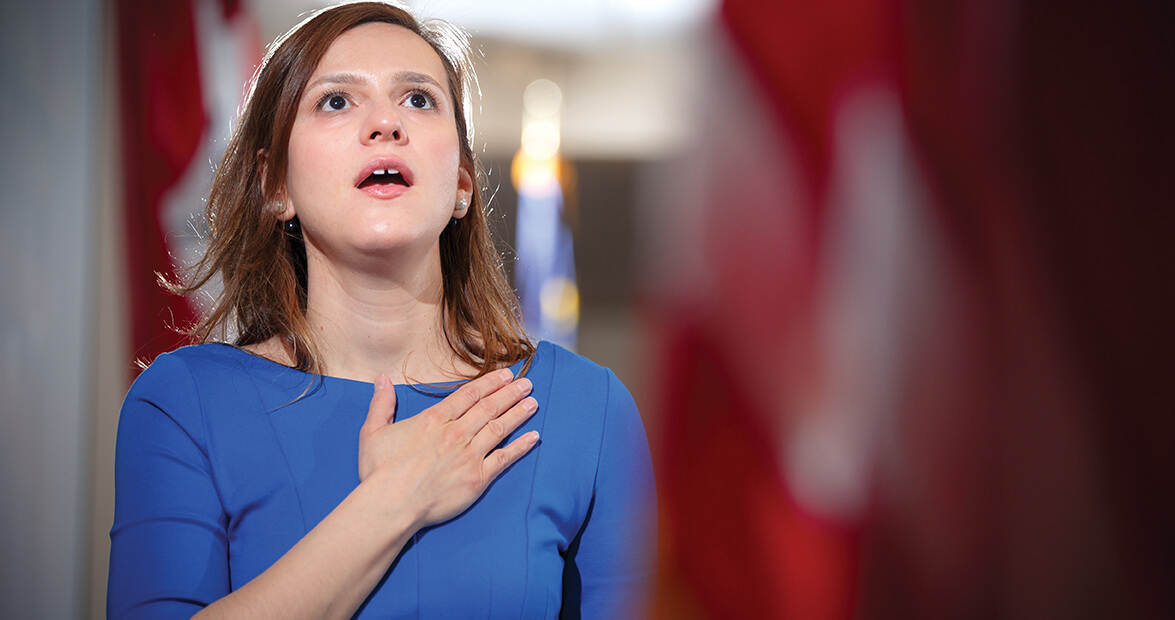 The naturalization ceremony flows like a church service, with two government workers as the pastors. Amra Beslagic, a petite brunette in a dress and heels, handles the logistics. She runs the DVD player, takes care of roll call, and hands out folders. Leander “Lee” Holston, the sharp-suited, salt-and-pepper-haired field office director, administers the oath, gives words of advice, and makes tame jokes. “You have one last opportunity to change your mind,” he says, to mild chuckling from soon-to-be Americans.

This happens twice a week, in a beige-colored room in a generic office park in Charlotte. There’s a small stage. Some red, white, and blue bunting. Fluorescent lighting and neatly arranged metal-and-vinyl chairs. The ceremony is always the same: There’s a welcome followed by the roll call of nations, an acknowledgement of everyone’s country of origin. Everyone watches a video slideshow with dissolving pictures of prominent American landmarks set to patriotic music. There’s also a message from the president. (“He’s here?!” one girl gasps on this day last October, before she realizes that Barack Obama’s message is recorded.) But the big — and legally required — moment is the Oath of Allegiance. The kids in the room repeat it, too, and you can see the astonishment on their faces when some of them find out that, by law, they’re now U.S. citizens, just like their parents.

This is a big moment. The next big moment happens on Thursday. And then on the following Tuesday. And again. And again. Each year, some 730,000 people become American citizens in the same way. About 7,500 of them come through Charlotte. This room, in this place, is where the American Dream rolls off the assembly line.

“Even though we do it twice a week, the faces we see are different every time,” Holston says. Even though the emotions are fresh, there is a familiar pattern to the reactions. People’s faces always seem to change as they stand during the roll call, when “they’re representing their country for the last time,” Holston says. Then, after the oath, “it’s like a watershed let loose,” he continues. “They look like brand-new people.”

This moment has made Holston into something of a celebrity among the Charlotte area’s newest citizens. “I don’t get approached that much,” he says, chuckling. “Maybe it’s because I have no life.” Once, though, he walked into a convenience store to buy batteries, and the clerk behind the counter pulled out a telephone, and scrolled until he found a picture of himself standing with Holston on the day he became a citizen.

The pictures — and oh, are there pictures — capture that ephemeral moment of transformation and pure joy. Fifi Kingambo, from the Democratic Republic of Congo, grins as she poses with a packet of official paperwork. She fled her country 12 years ago. She’s now a Charlottean. During the ceremony, she smiles at a friend who’s standing against a wall. The friend starts to cry. Moments later, when Kingambo is registering to vote, a helpful volunteer from the League of Women Voters tells her that she’s forgotten to check a box. “Are you an American citizen?” the volunteer asks. 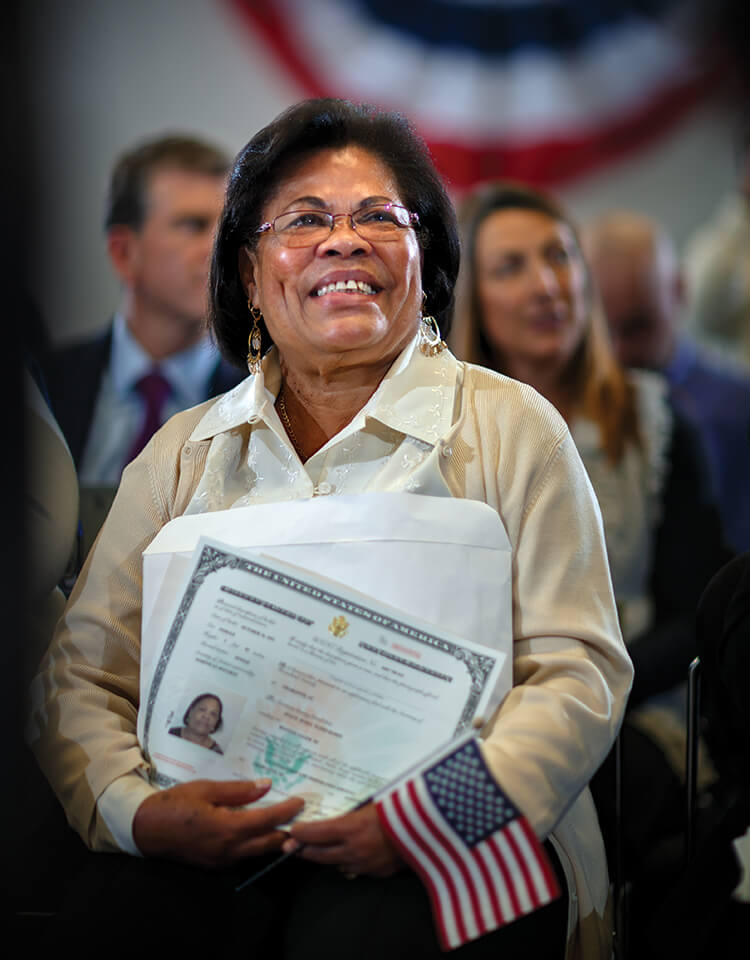 Amukta Chelikani, a 32-year-old who now lives in Concord, came from India. “When I first heard 38 people today were taking the oath from 32 different countries,” she says, “that’s what really felt amazing.” Chelikani is one of many new citizens in the Carolinas from Asia. Lately, more people are coming to North Carolina from that part of the world than from Mexico or Central America.

Sean Augustin, a 34-year-old IT professional from the island of St. Lucia, got the most emotional during President Obama’s recorded message. At the time, he recognized that the next president would be white. “I’m very privileged to have a black president welcome me,” he says. He stands next to his wife, Natasha, an emergency room doctor and an American citizen by birth. Her husband’s journey to this point has made her reflect on her own citizenship. “They know the Constitution more than we do,” she says of the newest citizens.

Even one of the people leading the ceremony is, herself, a naturalized citizen. Beslagic, at one point, tells the audience that she came to this country as a Bosnian refugee. She went on to graduate from the University of North Carolina at Chapel Hill in 2003, and is now a supervisory immigration services officer in the Charlotte Field Office of the U.S. Citizenship and Immigration Services. “I was born in Bosnia, but bred to be a Tar Heel,” she often says at ceremonies. She understands what everyone in the audience is going through. She knows why they cry. Why they smile. And she knows why they all want this. Everyone is different, but they all share one common conviction.

“Now, nobody can stand in front of you and say, ‘You cannot do that.’ ”

These are uncertain times. And yet, there is a certainty to becoming a United States citizen. It is the warm-and-fuzziest, most idealistic, Horatio Alger-iest version of the American Dream, that if you come to this country, yearning to breathe free, if you put in the time and effort, you, too, can enjoy everything this nation has to offer. That is an oversimplified version of things, and, of course, there is a bureaucratic maze of visas, green cards, immigration quotas, and paperwork to navigate, but still, the simplest version of it all is: It’s possible. One of Holston’s favorite quotes is from a speech President Ronald Reagan gave in Moscow in 1988. There, the president told Russian students about a powerful letter a man had written to him. “He said, ‘You can go to live in France, but you cannot become a Frenchman,’ ” Reagan said. “But he said that anyone, from any corner of the world, can come to live in America and become an American.”

This ceremony is the most pristine manifestation of that vision. The marrow of the bone. Patriotism is on display in its purest form, and the mood is always celebratory, even when the world seems to be in turmoil. “We’ve never been exposed to a lot of the negativity,” Holston says. Both the agency and the ceremony have somehow been cordoned off from politics. “We make green cards and U.S. citizens,” he continues. “We don’t get protests in front of our building.”

What they do get is a lot of hope, smiles, and relief. And it’s at this point, right after Holston delivers the oath, that he looks out from his small stage and drives home his point. “When you walked in the door today, there were things you could not do,” he says, his words building, like in a sermon.

“Yup,” calls out a woman in the audience.

“Now, nobody can stand in front of you and say, ‘You cannot do that,’ ” he tells them. “You earned this.” Now, the faces and postures change. A woman in a blue headscarf tears up. A Burmese man in a shiny suit concentrates to understand the English. An Eastern European man in a T-shirt, jeans, and boots watches, motionless. Others clutch small American flags. They tuck packets of certificates, paperback Constitutions, and passport applications under their arms.

As Holston wraps up his sermon, he tells the newly minted U.S. citizens where they can go from here: They can vote. Run for office. Travel. The journey to citizenship is over, but the journey of life continues. “Don’t stop now,” he says. Minutes later, after the pictures, the smiles, the handshakes, and the hugs, everyone walks outside, from the windowless room into the sunlight. They used to live in our country. Now it’s theirs.