The first time I took a sip of hot coffee from The Mug, I became an East Fork pottery believer. An instant fan. A fan of dishware? Yes. The Mug — my mug — was a deep blue-green, a color called Night Swim that had an air of mystery. It was hefty to hold, smooth to the touch. It had perfectly imperfect speckles and a thick, unglazed rim. It held the exact right amount of coffee. I never wanted to drink out of another mug again.

Soon after, my mom texted me: “What do you want for Christmas this year?” “Plates,” I responded immediately. “You’re really going for it,” she wrote back. “You’re adulting.”

OK, so maybe that was the source of my obsession — a desire to own a beautiful set of dishes rather than the assortment of random plates and bowls I’d been collecting since college. To feel like I had it all together, at least in the kitchen. The Mug was my first real taste of quality. But still, I thought, Mom needed to see pottery from East Fork up close, to hold it, in order to understand why it was special. Dishware actually isn’t boring — she was just an East Fork fan who didn’t know it yet.

A dream began to take shape: A full dish set from East Fork — my own dish set. Settings for every occasion. I envisioned a dinner party with a fabulous array of plates on the table. A collection I could — gradually — add to. Something I could build.

In the shadow of the Blue Ridge Mountains, in an old Madison County farmyard down a dirt drive known as East Fork, smoke puffed out of a hand-built, wood-fired brick kiln. For Alex Matisse, the pottery being fired was his first true dream being realized — but there were even bigger dreams to come.

Alex, the great-grandson of French modernist Henri Matisse, had long been drawn to pottery over painting. “Since the fourth grade, I gravitated toward it,” he says. “It didn’t feel like I was held to the same standards as if I were a painter — I was free from that. I’ve always loved the physicality of it, the process behind it. It’s so much more than just drawing.”

At 18, he left his home in Massachusetts to attend Guilford College in Greensboro, where, one day, he wandered into the ceramics studio. With the help of a professor who showed him the richness of North Carolina’s pottery tradition, he discovered just how much he loved the medium. How serendipitous, he thought, that he’d come to this state to go to college. When he’d blown through all the classes he could take in his program, he began working for Matt Jones, a potter outside of Asheville. Soon, Alex dropped out of school to become Jones’s full-time apprentice.

“There was something about walking into that workshop,” Alex says. “There was a woodstove, and it was smoky. The workshop was damp, and it had a dirt floor to keep the clay moist and drying slowly. And it was just very dark and visceral and nostalgic, and I loved that. And then there was so much around the making of pottery that I loved, too, because I’ve always liked working with my hands. There was wood to chop, bricks to clean, clay to make — and it just felt like such a full life to live.”

In 2009, Alex bought a former tobacco farm in rural Madison County and, with an admittedly romantic notion in mind, set out to follow in his teachers’ footsteps by building his own wood-fired kiln. Then, he met his future wife, Connie, in nearby Marshall. With her help, he laid his kiln brick by brick, and, in 2011, they officially launched East Fork. Alex was throwing every vessel, made with iron-rich North Carolina clay, by hand, and selling the decorative, embellished stoneware to collectors.

In 2013, fellow potter John Vigeland joined the fold, and the three friends and founders contemplated their master plan — what they would make, what they could build together. “We did have a vision,” Alex says. “We had already started to picture something much larger. We were imagining how we could breathe life into the next generation of U.S. manufacturing. Eventually, we decided to launch a line, and we took out a loan to buy a gas kiln. Going from wood to gas was sort of like going from driving around in a Conestoga wagon to buying a Tesla. It felt like a huge investment at the time, but that decision was really pivotal.”

With their new kiln, they began to simplify their pottery, to shift their aesthetic to something more practical — less fragile and delicate, yet somehow softer and more muted, with matte glazes and light speckles due to the iron in the clay. Plates, bowls, and cups that were modern, but substantial.

On the morning of their very first kiln opening, the trio eagerly waited for crowds to queue up for their new line of undecorated pottery: “Usually, people show up to a kiln opening at 8 o’clock in the morning, and you’ve got 40 or 50 people ready to come in … and nobody showed up to ours,” Alex says. “So 9 o’clock passes, then 10. Finally, around 11 o’clock, one little car comes bumping up the dirt driveway.” He grins. “But obviously, that only lasted for so long.”

Ten years since East Fork’s launch, it’s an understatement to say that the public conversation around the pottery is buzzier. The company has grown from its three founders to a team of more than 100 and moved from that old tobacco farm in Madison County to a 14,500-square-foot, light-filled factory in Asheville — plus a sunny storefront downtown and one in Atlanta. They transitioned from shaping each design on a wheel by hand, as they had for years, to taking advantage of a variety of machinery and molds, which help shorten production time and accommodate always-rising demand. 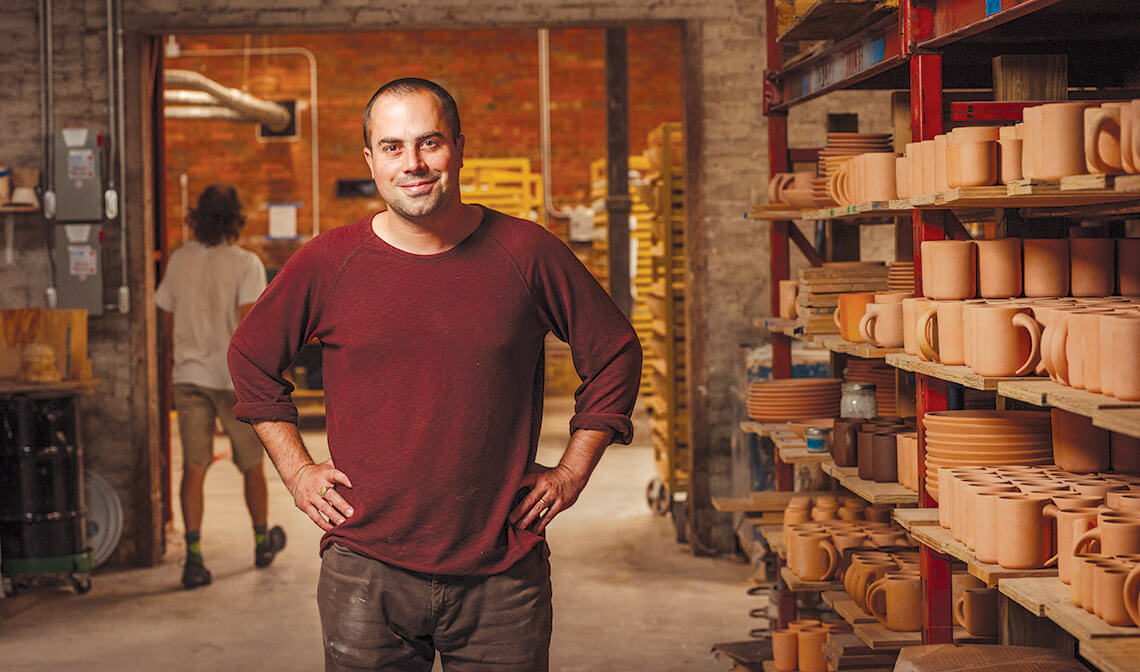 That no-show kiln opening is now just an Isn’t that funny? story from the past: East Fork’s dishware quickly built a cult following, which has grown so much that it can hardly be called such (although some fans are, decidedly, still cultlike in their devotion). Connie’s irreverent, fun, and colorful creative branding and her authentic, behind-the-curtain Instagram posts have endeared the masses, while national press from The New York Times, Vogue, and other media outlets alerted those who hadn’t already caught on by word of mouth.

When they launched a version of The Mug made on their new machines, there was a 3,000-person waiting list.

Before East Fork upped its production capabilities, huge restocks of items like The Mug (its official name) would sell out in minutes, creating a cycle of an ever-increasing demand for more. It wasn’t on purpose — Connie, Alex, and John were just doing their best to keep up, but it seemed like no matter how many mugs they made, it was never enough. When they finally launched a version of The Mug made on their new machines, there was a 3,000-person waiting list. Now, there’s no more waiting. Their dishware is produced year-round in earthy, neutral colors like Eggshell, Morel, and Panna Cotta, while brighter colors — from Taro (a muted, pastel purple) to Tequila Sunrise (a warm orange) — pop up seasonally for a limited time.

But growth hasn’t come without challenges. “I remember being in labor with our second child, and I was bouncing on an exercise ball, responding to customer emails,” Connie says. “At the time, I remember thinking to myself, I have to be doing this.”

Now, a legendarily friendly customer service team takes care of emails and messages from new fans and, yes, seasoned fanatics. Remember “cultlike”? Customers have been known to send dozens of emails in a day; a woman recently showed up and milled about East Fork’s storefront every single day for a week; and a collector bought an armful of special two-handled mugs — which, within 10 minutes, she posted on the East Fork Community Trade account on Instagram (yes, that’s a thing). The enthusiasm is a reality that Connie and Alex haven’t quite been able to wrap their heads around.

“Sometimes,” Connie says with a sigh, “I want to say, It’s just pottery. It’s like the Beanie Babies craze. We’re just trying to navigate this very strange, very new world of people who are taking it to another level.”

What is it that makes East Fork’s dishware so collectible, so covetable? It is, after all, just simple, unadorned pottery. And yet I’ve spent hours deliberating over which neutral color to commit to (Panna Cotta or Eggshell?!), which seasonal colors to wait for indefinitely (I need you, Night Swim), and which pieces to buy in which glaze. Should I have cake plates with a pop of color? How many place settings? I’ve pored over East Fork’s Instagram account, searching for pairings that I love — and then, when I spot one, I question my original decisions.

When I opened my Christmas present and saw my very first East Fork supper plates — in creamy Panna Cotta — I rubbed the edges beneath my fingers. They’re thick and full-feeling, soft and matte-smooth. My boyfriend peered over my shoulder before gently running his hand over them, then picking one up. “Oh,” he said, and smiled. “Now I get it.”

“Yes, I think the product is good — it has character, it has soul, it’s made with materials that have substance, that feel real and toothsome,” Alex says. “But really, it comes down to Connie’s voice and the sincerity with which she speaks to people. We’re not a typical direct-to-consumer brand — those companies that feel kind of soulless. We’re very, very passionate.” 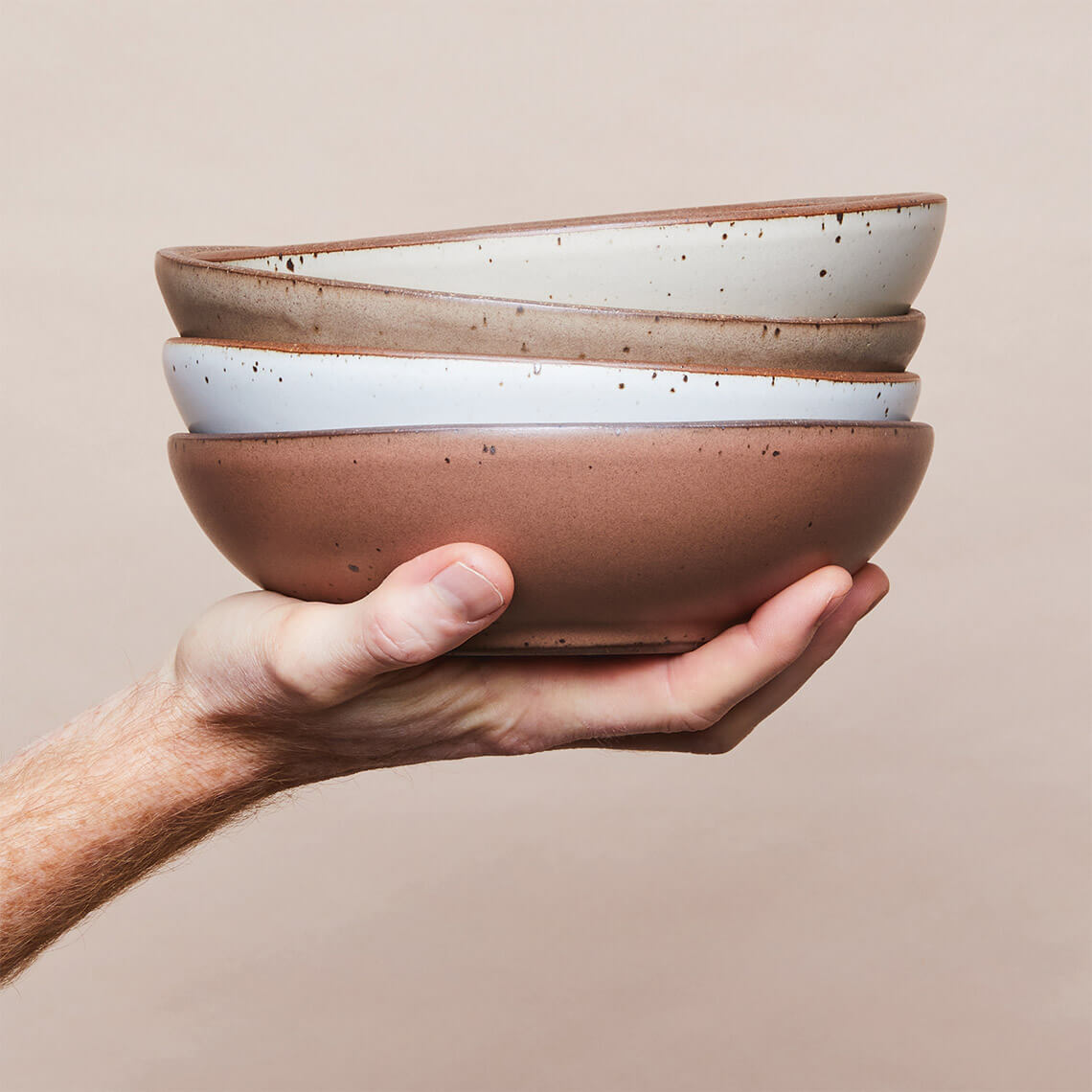 Now, 10 years after Alex first fired his hand-built kiln surrounded by forest and farmland and woodsmoke, a dream for the next decade takes shape: a large campus with an apprenticeship program similar to how Alex learned the craft. The Matisses are hoping to replicate the feeling of New Belgium Brewing’s Asheville campus, to become one of the largest ceramic factories in the U.S. “Which isn’t hard, since there are only about three of them left,” Alex says. They envision a dynamic, vibrant hub where people can visit to learn about pottery — this rich North Carolina tradition — and shop, of course.

Now, I open my cabinets, and I dream in earthy Eggshell creams and pale Taro purples and deep Night Swim blue-greens: of weeknight suppers on mismatched plates in front of the TV and of elegant dinner parties with a perfectly set table; of juice cups small enough for children to wrap their hands around and mugs in a rainbow of colors for their dad and me to sip from. Of something to pass down — of something to build.