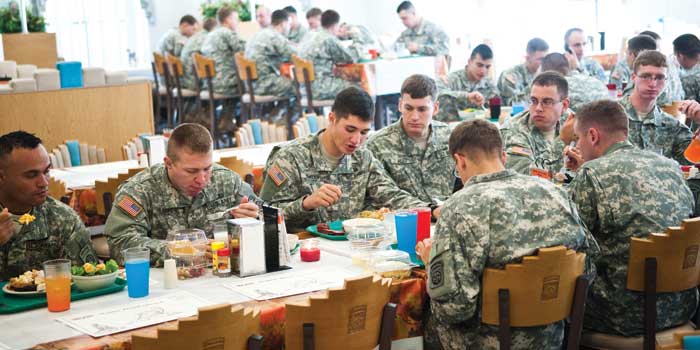 In 2009, Thanksgiving had then-Pfc. Brandon Akins helping prepare perhaps North Carolina’s largest feast. Private Akins was 24 at the time, a new Army cook — or chef, as he prefers — with the 82nd Airborne Division stationed here clear across the country from where he spent childhood Thanksgivings devouring his mother’s home cooking.

The smells that filled his mother’s Los Angeles kitchen inspired Akins at an early age, and in grade school he was already dabbling with recipes. Soon he’d be making holiday pumpkin and sweet potato pies. But that was child’s play. At Fort Bragg cooking his first military Thanksgiving, his orders were to feed an army.

The menu, in part: 13,400 pounds of turkey (the weight of two Humvees and then some); 3,000 pounds of prime rib; 700 cans of yams; 1,400 pies of all flavors and fillings. Preparations took months. Of course Akins had help, but his duties put him in charge of turkeys for his dining hall and had him working late into the evening marinating while others chopped potatoes, onions, carrots, and yams. He got a few winks of sleep then returned to the Army kitchen at 0-dark-thirty, before sunrise, to slip properly basted birds into large silver ovens to roast all morning.

In every nook and cranny of Akins’s vision, there was food. And as the turkeys turned honey brown, the smells overpowered. Soldiers began appearing outside, their noses at attention well before the doors even opened.

Fort Bragg includes more than 50,000 soldiers from every which way across this large country. And as meal time neared that day, high-ranking officers in dress blues took their places behind the kitchen counters and readied their serving spoons to scoop gravy and stuffing and cranberry sauce onto the plates of the hungry troops waiting outside.

Soldiers and wives and husbands and children fidgeted in line outside, pulling cell phones from pockets to see just how much longer. Please not much longer. Soon it would be time.

The smells enter Akins’s nose, too, and sensory cells send electrical signals to his brain, and suddenly Brandon Akins is a child again. With a whiff, Brandon remembers playing football in the park with buddies all Thanksgiving day until time arrived, around 5 o’clock. His mother, Tierney, remembers those Thanksgivings fondly as well. She’d be up to start the turkey at 6 a.m. Her work continued all day, the house’s doors open to let the mild Southern California breezes cool the kitchen. And to let the whole neighborhood know when dinner was near.

“You could smell Mom’s cooking from down the block,” Brandon says. A “come-to-me smell,” he calls it. “You just follow your nose.” All the boys from football were welcome, too, to stop by and fix up a plate. 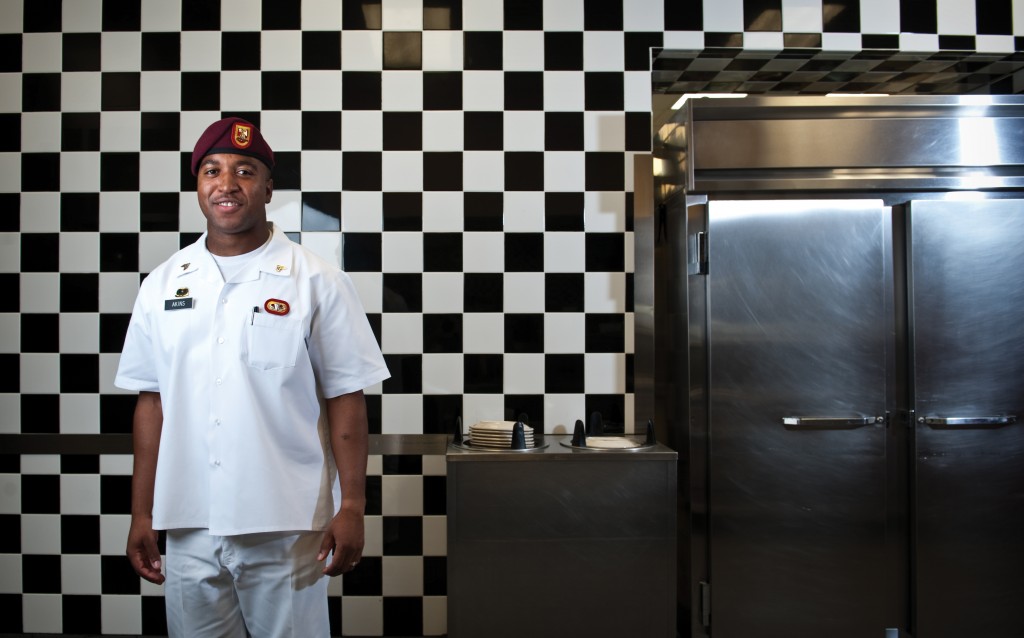 Sweaty and hungry, Brandon and his pals would follow inviting aromas from football in the park. They left Tierney’s house suffering from only one of the two ailments with which they came.

These days getting everyone together proves more difficult, as it does for many families when children become men and women, husbands and wives, fathers and mothers. Tierney Akins’s six kids grew up and scattered. One son is still in California, another in Las Vegas. She has a daughter in Washington, D.C., another in Georgia. Two more boys, including Brandon, joined the Army. So Tierney migrated herself, leaving Los Angeles behind for Florida.

But for Thanksgiving 2010, the year after Brandon’s first Thanksgiving as a chef at Fort Bragg, Tierney managed to corral them all into one room again. The entire family gathered in Florida. Brandon remembers the feast fondly, slowly, as if he’s tasting each dish again as he names it.

Trust that Brandon could go on.

And in every nook and cranny of Brandon’s vision, there was family. At least 30 people. They had multiplied. Though he might’ve felt like a child for a moment, Brandon wasn’t just a son or brother anymore. He was a father and uncle now, too.

Brandon breathed deeply in Florida, taking it all in, and caught himself looking around the room, everyone growing and grown up, playing their new roles around a Thanksgiving table that held so much weight.

In 2011, for the first time, Thanksgiving didn’t feel familiar to Brandon Akins. He was stationed in Al Asad, Iraq, promoted to specialist and would soon make sergeant. Specialist Akins was supervising Iraqi military cooks — enforcing Army standards and teaching them how to feed large groups. Don’t prepare the French fries four hours before mealtime, he’d have to tell them. Not even to get ahead.

But come Thanksgiving Day, there was no turkey, no relatives, no come-to-me aroma for Akins, who was living in a tent as the war wound down. 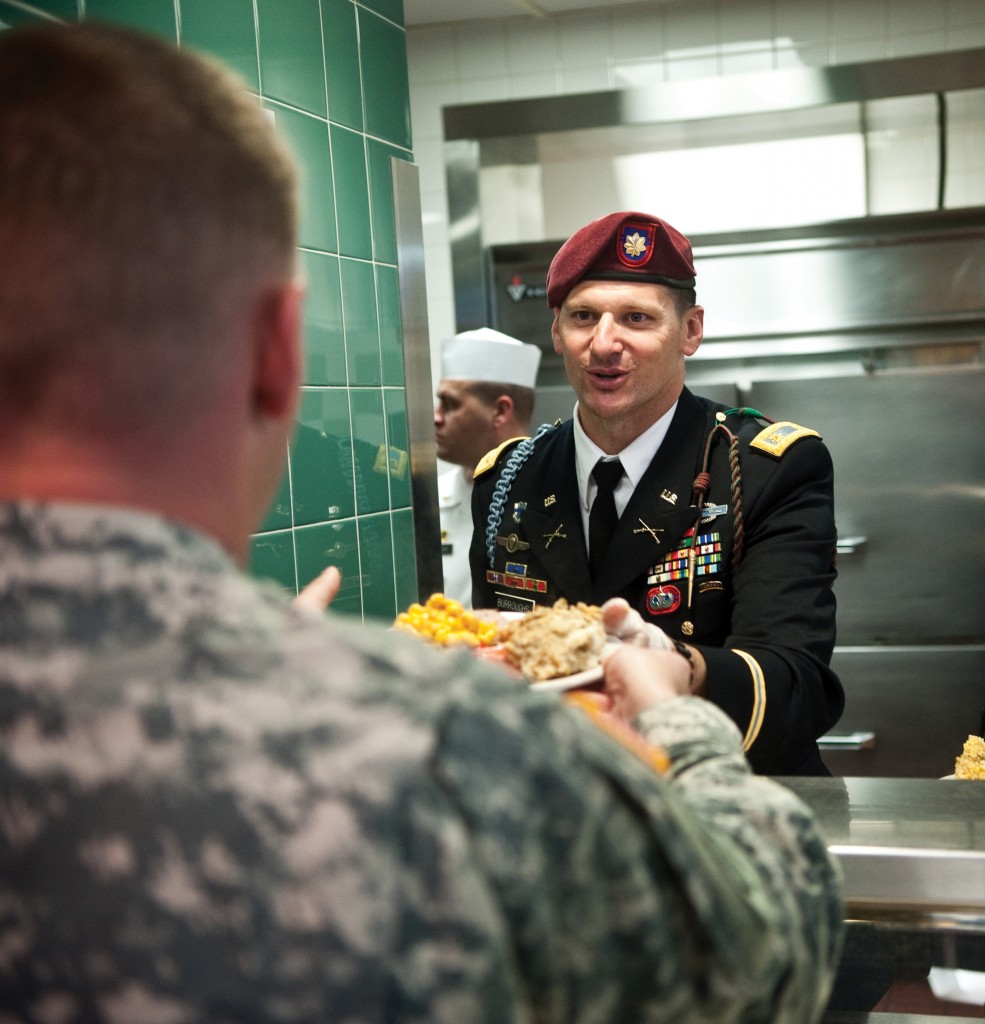 Fort Bragg holds its annual Thanksgiving meal on Wednesday. Officers, such as Maj. Jeff Burroughs, go behind the counter to pile fixings high atop the troops’ plates. photograph by Andrew Craft

Since 2001, 2.6 million American troops have deployed to Iraq and Afghanistan, many more than once. Holidays, birthdays, and anniversaries didn’t exist in war, Akins thought, not quite in the same way. Soldiers in austere outposts sometimes mark Thanksgiving or Christmas by roasting a goat bought from nearby villagers. But often those special occasions are just another day at work, another sunrise and sunset closer to home.

At Tierney Akins’s home in Florida that day, she’d managed to wrangle her far-flung family again. All but Brandon. He was halfway around the globe trying not to think too hard about what he was missing. His mother was trying not to dwell too much on how much she worried.

Yes, Brandon was in Iraq. But he was on a base that seemed safe, and the war was nearing an end, she’d tell herself. But he was still in a desert war zone where roadside bombs and snipers hid. Tierney, now 63, had lost her brother Gerald in Vietnam. And the potential consequences weighed on her daily as Brandon proudly served his duty.

Tierney wondered if she was up to playing host for such a joyous feast again, but she talked herself into another Thanksgiving celebration. She did her best to replace fear with hope, a spin on the same emotion. She told herself to stay strong for the rest of the family, to remember that every day that passed was a day closer to Brandon’s return. And if she cried that day, she says now, nobody else saw.

When her big family sat to eat, Tierney said grace. “Bless Brandon and keep him safe and out of danger,” she prayed. “Bring him back to us.”

Seated on a stiff, green cot in a tent more than 6,700 miles away, Specialist Akins tore open the heavy, brown plastic bag of military food rations that had become all too familiar to him. He pulled out an MRE (meal ready to eat) pouch containing an omelet, so to speak, that he could safely eat up to five years after some other cook had prepared it. MREs are not known to excite taste buds — they’re there to get a job done — but the omelets are considered to be among the most offensive to the senses.

Nevertheless, Akins poured water into a special heating bag, starting a smoking and sizzling chemical reaction that warmed his meal. For him and the 40 other soldiers — some of the final U.S. troops to exit the country after eight years of war — in this tent in Al Asad, Iraq, this was Thanksgiving.

Warm, old eggs from a pouch.

The way a person thinks about time veers when the military transports him. The way he thinks about food does, too.

It’s a kind of small miracle, that omelet pouch of Akins’s. Akins can eat a hot, filling meal — even one that’s five years old — anywhere in the world, without a kitchen or electricity or fire or time to cook. Those blessings were not lost on Akins as his old eggs smoked and sizzled. In Haiti after the devastating 2010 earthquake, he saw starving people fighting over MRE scraps — items like packets of cheese or bread — and desperate mothers lined up for the chance to claim a bag of rice in order to keep their families alive.

This year Akins plans to spend Thanksgiving with his new bride, Natasha, and their two sons at their home near Fort Bragg. He’s in school while still enlisted, and he won’t be cooking this year’s Army feast. His family considered visiting his mother in Florida, or Natasha’s parents in Detroit. Most likely the four of them will sit around a small table in their own dining room. Where kind of misses the point, he’s come to learn. Home isn’t on a map.

Those old eggs were a crummy substitute for the feasts Akins remembered in his mother’s home, and certainly for the one he prepared at Fort Bragg. But he wasn’t going hungry.

“Happy Thanksgiving,” the soldiers in Akins’s tent wished one another, simply and with little fanfare. There were no speeches about holidays or thankfulness.

But Akins looked around again, and he was proud. He sensed others were, too. This sacrifice was a small one of many they had experienced together. Family can mean different things. And so can a holiday.

“You might have an omelet in your hand,” Akins says, “but when you look at all your battle buddies that have the same uniform on as you, you know that despite rank or position these are the same people that’ll die for you. That’ll fight for you.”

And so Specialist Akins silently gave thanks.

John Ramsey lives in Fayetteville and works as an enterprise reporter for The Fayetteville Observer. His most recent story for Our State was about the ACCESS North Carolina guidebook (March 2012).