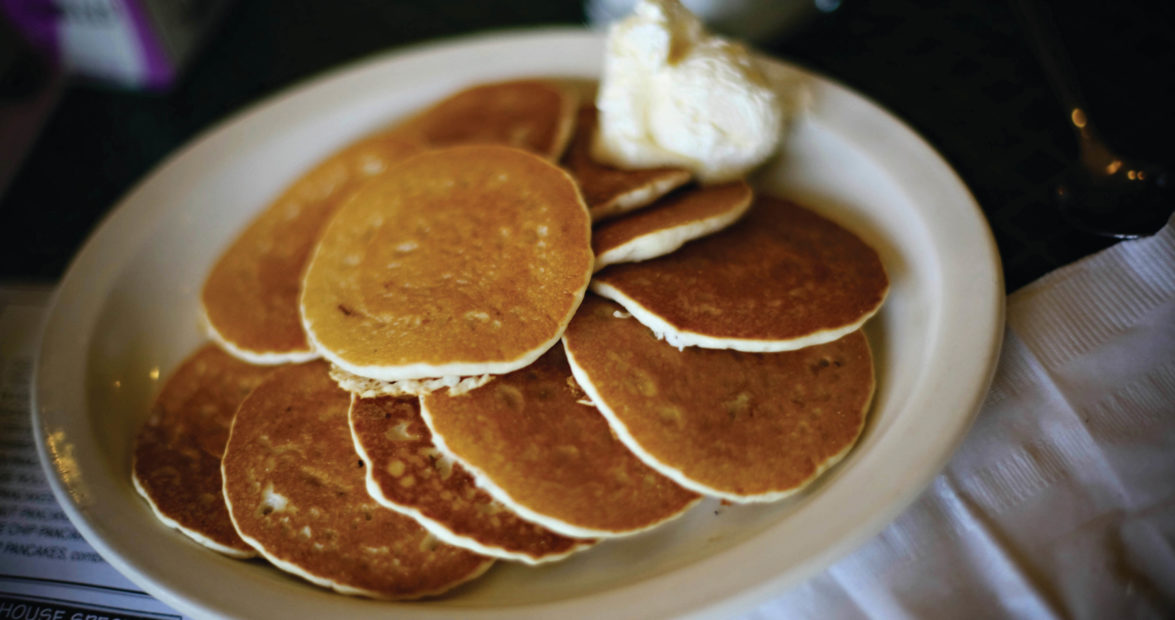 It’s Saturday morning at her restaurant — Joey’s Pancake House in Maggie Valley — and she’s at a lectern in the center aisle, steering the action like a ship captain at the wheel. She directs waitresses to tables, glances around to see who needs coffee, checks on the line out front. Two dozen people are waiting in the lobby, and a dozen more are standing outside in a drizzle. If you don’t mind getting damp, that view from outside is a nice one — straight up into the shoulders of the Smokies. Makes you daydream about long hikes, the smell of the woods, your thigh muscles straining around switchbacks.

The sort of thoughts that make you hungry.

Brenda will have you inside soon. She’s been running this place for 44 years, and for much of that time, it’s been one of the most popular breakfast places in the state — the place to come for pancakes, of course, and country ham, and a hash-brown casserole straight out of your dreams. She knows how to get people in and out. No one rushes you when you’re at your table, but once you’re gone, it’s cleaned off in seconds and the next group is welcomed in. On a busy day, like this one, Joey’s serves 700 to 800 customers. And it’s open only from 7 a.m. until noon.

Brenda didn’t plan to run a restaurant. She didn’t plan to live in Maggie Valley. And she definitely didn’t plan to be doing both those things for the past 44 years. But how she got here is not as much about business as it is about love. And that part of the story starts with the guy whose name is on the sign. Joey.

OK, she’s got a couple of minutes now. Let her tell you about it.
Brenda met Joe O’Keefe in Miami Beach, where they worked at the famous Fontainebleau Hotel. “He was the most debonair man,” she says. “His blue eyes, they just sparkled.” He was 47, and she was 22, and neither one cared. They came to Maggie Valley to visit friends in the summer of 1966. As they lingered in town, they noticed a little restaurant building that was up for lease.

“My mother and sister had been in the restaurant business, so I knew a little about it,” she says. “Joey had never been out of a silk suit. He had never cooked an egg in his life.”

But when you are newly in love, there are no obstacles, only adventures. They went back to Miami Beach, packed up their stuff, and came back to the mountains. They found a little Methodist church in Maggie Valley and got married. They opened the little restaurant and named it Joey’s — down in Miami Beach, he had gone by Joe, but they decided Joey sounded friendlier. They learned to cook eggs and went home every night with pancake mix on their shoes.

About two years into it, Brenda looked up one morning and saw a line outside the door. She knew they’d made it.

They went back to Florida and the Caribbean for the winter and spring, fishing and diving and relaxing, but every May through October they came home to Maggie Valley. In 1970, they moved the restaurant to a bigger space, an old Howard Johnson’s that they fixed up and added on to. They built a house next door, exactly 125 steps to the restaurant. Their big word was consistency. The pancakes should taste the same every time. The floors need to shine today like they did yesterday. “I was tough, especially at the beginning,” she says. “Still am on a lot of things. We have a 102 health grade. Which is great. But it better not be anything else.”

Joey and Brenda had a ball, working together, but a restaurant means coming in early and staying late and running hard in between. They never had children. I try to phrase the question I want to ask, but she jumps in and does it for me: “Is this our baby? Of course, this is our baby.”

For years, they stayed open from 7 a.m. to 3 p.m., but then Joey had what Brenda calls a “heart incident,” and they cut back the hours. Joey loved being at the restaurant, though. He moved out to the cash register and chatted with all the customers he had waved at from the kitchen all those years. He kept working until his heart gave out. That was November 29, 2001. He was 83.

That was 10 years ago, and Brenda says she spent the first nine and a half years crying. So you can imagine what she was like when it first happened. People asked, reasonably, if she was going to close the restaurant. But she had 55 people working for her. And she knew Joey would want her to stay.

So here we are, on a busy Saturday morning, and Brenda is telling the story and wiping one more tear. But then she straightens up in her chair. This is not just love. This is business. She waves a finger from one spot to another. These old booths are a pain to paint, but they get a fresh coat every year. Those older women are coffee servers — they come behind the waitresses and make sure everybody’s cup is topped off. Always keep extra people on the floor. If the service is good, people remember. That’s how you do business when nobody else is doing business.

Right as she finishes making her point, a man walks up to the table. His name is Doug Burnette, and he’s visiting from Lancaster, South Carolina. He couldn’t have timed it better if she had paid him.

“I just wanted to tell you,” he says, “that when I’m out for breakfast, I always order oatmeal, and I’m always having to put salt and butter on it, and the texture is never right, and this is the only place I’ve been where it’s just right at the beginning.”

“Well, let me tell you how that’s done,” she says. “We have someone back there that stirs the oatmeal for 30 minutes straight. That’s what you have to do to make sure it’s good. And I don’t care what else is going on, they better stir that oatmeal.”

A couple of years before Joey died, Brenda started running the restaurant year-round, although she still takes off a few weeks in the coldest part of winter. The busiest months are July, in the middle of tourist season, and October, when everybody comes to look at the leaves. She gets postcards from customers all over the world, including one who took a bag of pancake mix to Antarctica. They get 300 applications every spring from students who want to work there for the summer. Whole families have made a living at Joey’s. Kathy Holt, dining room manager, has to think about it a second: “OK, I’ve been here 22 years, and my husband worked here, and two sons and a daughter.”

So yes, it’s a business. But Brenda thinks of it as a family, too, and of course you know who is first in her heart. Joey’s name is still on the sign, and his face is still on the menu, and Brenda says she can feel him in the building. She never expected to be here, never expected to be doing this. But it’s been 44 years now, and she’s proud of what she and Joey built.

She puts in her day of work and then she walks home, 125 steps. It’s good to be close by, in case she needs to check in on her baby.