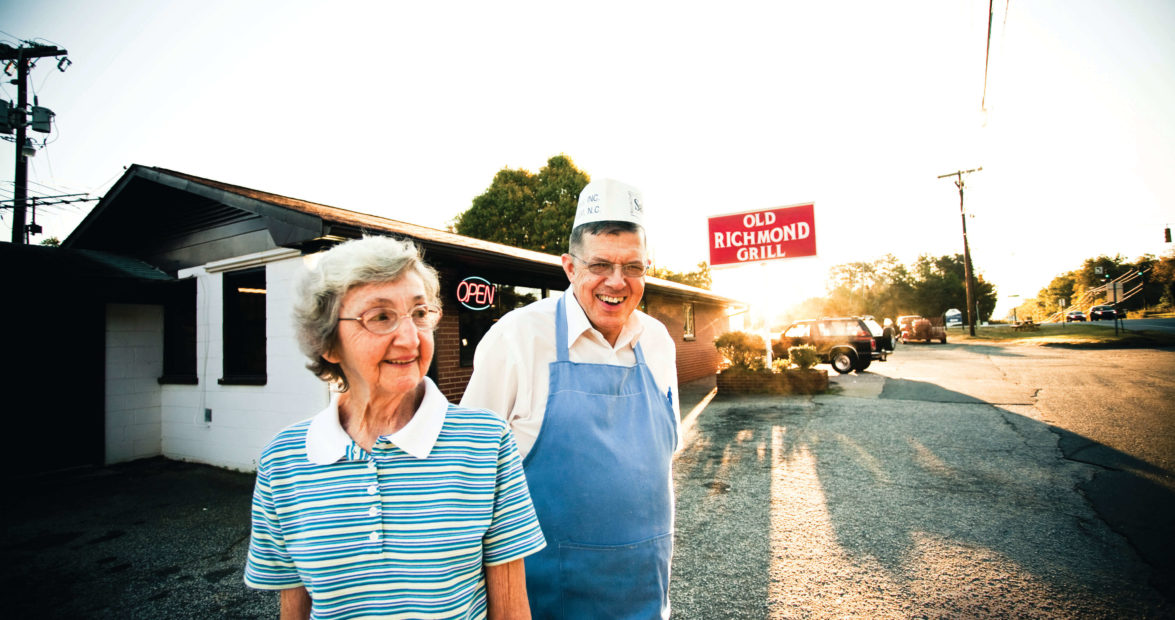 It’s nearly two hours before sunrise on a Saturday. The Old Richmond Grill is dark. Eddie Gregory and Hazel Lineberry pull up in their separate cars under the back door’s light and get ready for the breakfast rush at this lonesome corner between two hills near Winston-Salem.

Eddie opens the back door. Hazel feeds Baby, the stray cat a few steps away. Eddie flips on the kitchen light. Their day begins.

Eddie starts the coffee and begins stirring the grits as Hazel camps out beside him, kneading her biscuit dough on a table in the restaurant’s small kitchen. Flour freckles her wrists and hands.

She takes an old pineapple can and uses it as a mold to make her biscuits as big and round as the lid of a Mason jar. She brushes her biscuits with butter, sticks them in the oven, and walks into the restaurant to pick up the coffeepot.

“Eddie, want another swallow in your cup?” she asks.

“Just touch it,” he tells her.

For 35 years, Eddie and Hazel have been working side by side at Old Richmond. Eddie hired her, and Hazel has stayed there because she likes the customers, she likes Eddie, and she likes the idea of working three miles from her home.

Plus, she loves to cook.

She uses no recipes. It’s all in her head. It’s a pinch of this, a dash of that. She’s so instinctive she doesn’t look at her watch to time hardly anything she cooks. She just knows.

She makes pies almost too pretty to eat at Old Richmond. But for breakfast, she makes her famous biscuits and her famous gravy that draw customers from all around.

Eddie, however, is the egg master. He hovers over the grill, a spatula in each hand, cooking eggs fit to every order — scrambled, sunny-side up, over-medium, and stacked on a sandwich at least three inches high.

This is his place. This is Hazel’s place. And to many, Hazel and Eddie are as familiar as family, as comfortable as your next of kin.

Hazel is 80, a slender woman with a sweet smile and strong hands, and she’s known for her cooking. Her right shoulder aches a bit, and a few of her fingers are crooked from a touch of arthritis. There’s a good reason for that, of course.

“My doctor,” she says, laughing. “He says I wore ’em out makin’ biscuits.”

Eddie is 61, a bespectacled man with stooped shoulders and a crooked grin. He started at Old Richmond in 1965 as a curb boy, taking orders from cars full of customers. He later graduated to washing dishes and fixing hot dogs.

Now, he runs the place. And it’s less than a mile from his home.

He used to be called Fast Eddie. Now, he’s just Eddie, the man behind the counter, the master of the spatulas.

Ask him about that, and Eddie takes you outside, to the men’s bathroom and points to the water pipes just below the toilet’s tank.

He’ll tell you how the temperature went way south of freezing one winter, and he installed an electrical outlet and plugged in a 100-watt bulb at the base of the tank to keep the pipes warm.

He taps his head.

“Man’s got to think for himself,” he says.

Before the day’s first light

It’s a comfortable spot, Old Richmond. It first opened in 1955, as a drive-in, during an era when the movie American Graffiti was real life. Since then, Old Richmond hasn’t changed much.

It’s still as big as a convenience store, at the corner of N.C. Highway 67 and Bethania Road, a few miles northwest of Winston-Salem. It’s got 10 stools, five tables, and a bulletin board clustered with business cards that tell you who to call if you need a pallet, a pressure wash, or a roofer. Or if you want to participate in the Poker Run sponsored by the Soaring Eagles Christian Bikers.

Step outside, before the day’s first light, and it’s out-in-the-middle-of-nowhere dark. All you see in either direction of N.C. Highway 67 are headlights coming down the hill.

That is, until 5:30 a.m., when Eddie flips a switch above the door, and the “OPEN” sign glows red and blue. Within minutes, customers come. On this particular Saturday, the first customer is Trent Roddy. He’s 49, a cashier at the gas station just down the road.

He wears his first name on a patch over his heart. He comes in before work for a breakfast of eggs over-medium, sausage, and gravy. He’s been coming here every Saturday for a year, eating food that reminds him of what his mom, Patsy, used to cook during his childhood in King.

The next customer is Pete Grimes. He’s been here before — many times before. He’s 70. He used to bring his son Phillip when he was about 2; Phillip is now 34. And like Trent, Pete wears his first name on a patch over his heart and comes in to eat breakfast before work. For Pete, it’s a sausage-and-tomato biscuit. Then, he’s off to run the recycling drop-off center for Waste Management, a company he has called his professional home for 45 years.

Soon, through the slanted blinds, the day turns from deep purple to dull gray to bright sunlight. The door buzzes often, and customers push through the entrance in ones, twos, threes, and fours.

They’re hunters and dry cleaner workers, real estate brokers and plumbers, retirees and young families. They all come in for breakfast, for conversation, for Eddie and Hazel’s food.

Like Cowboy. He saunters up to the counter in his beaded belt, sleeveless cutoff shirt, and jeans. He wears a $100 cowboy hat with the custom-made horsehair braid tied around the crown of the hat that trails way past the brim like a slender ponytail. His real name is Steve Holder. He’s 55, a commercial plumber who grew up on a nearby farm. But everyone calls him Cowboy. It’s his nickname, now a curled rope of letters tattooed across his left forearm.

He orders two biscuits swimming in Hazel’s gravy. You can’t even see the bottom of his plate. Before he even takes a bite, Cowboy gives a review for everyone within earshot.

“This is the best,” he says. “You can go anywhere else in town, and you won’t find any better. You go to Greensboro, Charlotte, and you can’t find any gravy better. This here is old-fashioned gravy.”

He sees Casey Masencup, Old Richmond’s waitress, sitting at tables and taking orders from friends and familiar faces before bustling back behind the counter, coffeepot in hand. She’s been at it since 7 a.m.

“What you know, girl?” Cowboy says. “You behaving yourself?”

“It’s hard to misbehave when you work all the time,” she responds.

“My sister has the kids,” Masencup says, smiling.

Her twin sister, Jessica, waits tables at Old Richmond, too. And like everyone who comes through the front door to eat — or slips into the back door past the stray cat to work — they all have a history with Old Richmond.

When she was a kid, Casey used to ride her bike up to Old Richmond to eat a cheeseburger. She’s now 25, and she’s been waiting tables at Old Richmond on and off for the past decade. And like Eddie and Hazel, she knows everybody.

“I’ve been wanting to see you forever!” she says, hugging a customer who just walked in.

Take the four men down the counter from Cowboy. They’re easy to hear from five stools away.

“That’s the biggest deer I’ve seen in a long time,” one says.

“We hunted there in that cornfield for two afternoons,” a third says. “And I ain’t shot twice.”

In the middle sits David Hicks. He’s trying to get his hands around a sandwich made with four eggs, bacon, mayonnaise, and pepper. Or as his buddies say, a “bottle of pepper.” His sandwich is three inches tall.

“It is an artery clogger, but it sure is delicious,” says Hicks, 57. “In this area, eggs and bacon are like rice in China.”

And so it goes all morning.

In comes a Winston-Salem firefighter, Paul Logan, with his three-year-old son, Charles. They come for a biscuit breakfast — and a chance for Charles to put together a 24-piece puzzle of Thomas the Tank Engine.

In comes Masencup’s Uncle Ed for counter conversation and a sausage-biscuit pickup for Freddie, his wife of 54 years.

“You want to see my two grandbabies?” Hazel says to a customer nearby. “Here they are! We’re going home! We’re going to get some tomatoes.”

Before taking another order, Casey sits at the table, leans into Lori and Meriale and whispers, “She’s your grandma? You’re so lucky.”

Meanwhile, Eddie stands behind the counter, spatula in hand.

“Whew,” he says a few minutes after Hazel leaves. “It gets you a little tired when you have to stay all day. You start losing that adrenaline.”

Then Eddie trudges off toward the kitchen to fetch another pan of bacon. His day is far from over.

His 81-year-old mom, Cathy, will take over for him in the afternoon. But Eddie knows there are more eggs to cook, more customers to feed, more hellos to hear coming through the door.

Eddie knows every one.