As I wrote about in a previous post, doughnuts at the beach are a tradition in our state and it’s an honor to recognize that 2015 brings the 76th anniversary of Britt’s Donut Shop, one of the special places that started this summer ritual.

For anyone just learning about the rich history of Britt’s Donut Shop, Harvey L. Britt opened it in 1939 on the Carolina Beach Boardwalk. Originally located on the other side of the boardwalk, it moved to its current location in 1969. In 1974 Bobby and Maxine Nivens bought Britt’s from Mr. Britt. As a teenager in the 1950s Mr. Nivens had worked at Britt’s, and he continued a friendship with Mr. Britt in the years that followed. As loyalists will note, Mr. Britt also owned a second shop at 222 Princess Street in Wilmington which was open from 1939 to 1956.

Britt’s Donuts offers one flavor: glazed. They are delicious and amazing, but part of what makes visits to Britt’s so special are the memories that people have about going there. Doughnuts at the Beach generated a number of comments from users sharing their own stories about Britt’s. It was such a delight to read these wonderful memories that I continued to ask others about their personal recollections. 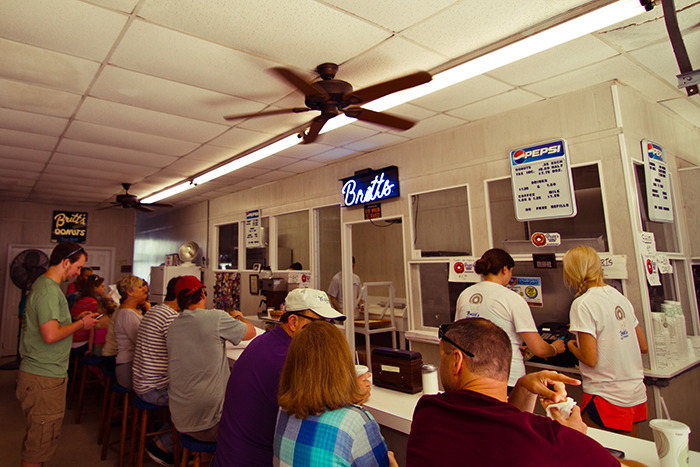 Dave Cantwell, grew up in Wrightsville Beach and now lives in Durham. He says that while growing up he would typically go to Carolina Beach once a year in the summer. Later, in college, he worked summers at what was then called King’s Motel. He says, “Among other things, I ran the night desk and often alerted people to Britt’s existence, though many guests were repeat visitors and thus already knew the score.” He adds, “These days, I typically make it down for a bag once or twice a summer when my sister is in North Carolina, visiting from Chicago. The Boardwalk has terrific people-watching, and a sack of hot doughnuts just sort of rounds out the experience, so to speak.”

Seungchul Choi from Cary had his first Britt’s donut in 1982 and says, “I loved it. There are always basketball hoops in the arcade across the way and cotton candy around the corner, but the best part of Carolina Beach is the hot and sweet, melt-in-your-mouth, Britt’s!” He adds, “My good friend Bill’s son Barry lived nearby and [he] was the one who first told me about the place, but everyone in Carolina Beach knows about Britt’s. We stop there anytime we’re at the beach.”

Jennifer Jones who lives in Durham started going to Britt’s in 1976 when she was a little girl. She says, “I always looked forward to summer, getting up early to walk to the boardwalk for hot doughnuts and milk. My brother, cousins, and all of the family would get up early in the mornings to walk three blocks to the boardwalk for doughnuts before spending the day on the beach.” She adds, “I still look forward to going to Britt’s now [that I am] in my forties.”

Another fan of Britt’s Donuts is Daniel Ray Norris, a resident of Carolina Beach and author of the books Carolina Beach, NC Volume 1 and Volume 2. He’s written and published the new book Britt’s Donuts: Forever Sweet, a great souvenir that preserves the history of Britt’s Donut Shop. Since 2006 Norris’s page about Britt’s on carolinabeach.net has been the go-to source on the internet for any details about the history of Britt’s. For this book Norris partnered with Halyn Prusa, the granddaughter of Bobby and Maxine Nivens. She listened to Norris’s ideas, helped provide family and historical photographs, and provided insights about who knew what details. 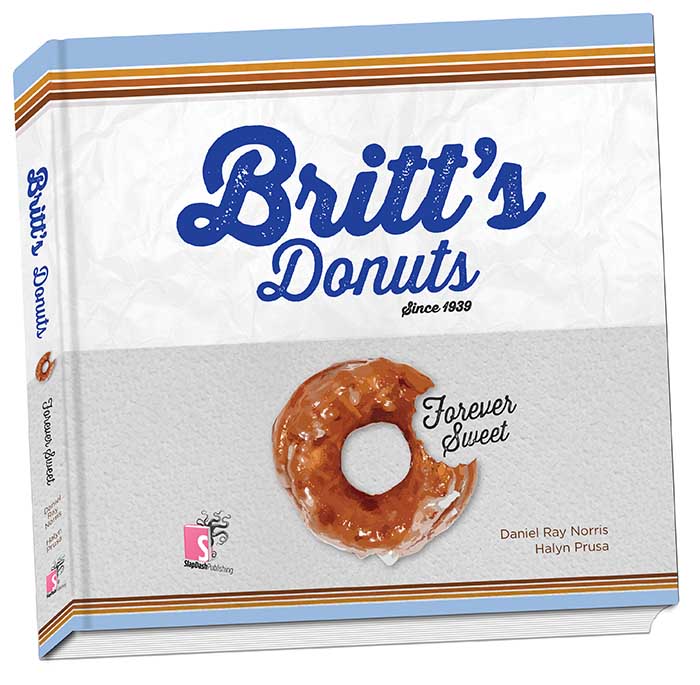 Norris says that about ten years ago Bobby Nivens suggested that Norris should take photographs of the boardwalk. Norris commented, “It got me a lot more interested to make sure that some of the things we take for granted today are not forgotten.” He thinks of Forever Sweet as a “time capsule” and he tried to “strike a balance between whimsy and wordiness.”

Filled with photographs, most of which are by Norris, the book offers a history of Britt’s from its early days through the present. The only other place I’ve ever seen a photograph of the shop’s founder and namesake, Harvey L. Britt, is on the wall at Britt’s. The historic photos and images include views of the Carolina Beach boardwalk, a historic newspaper ad for Valentine’s day donuts, and even a 1949 map of Carolina Beach that Norris carefully photoshopped together from a physical map that had fallen apart into eight separate pieces.

One of my favorite parts is the book’s end pages, a composite photograph of 50 Britt’s doughnuts. To create this montage, Halyn handed Norris each doughnut, which he then placed on a white paper bag on the floor to photograph. This focus on the variation relates to Norris’s own revelation about what makes Britt’s doughnuts so special. He writes that it’s, “their variability, the differences inherent to each donut.” He commented how there are the super gooey and hot doughnuts, then there are ones that are crunchier on the outside, others with thick icing, and then some almost no icing. “It’s much better that they have variability.”

There are also fun facts and figures in the book, like two pages of statistics about Britt’s. Another page lists all the people who Norris could identify have worked there. This list includes less than 100 people since so many employees return summer after summer. Despite his best efforts, Norris acknowledges that the list is not complete and he plans to continue to collect names, adding those into the next edition.

Norris founded the Britt’s Donuts Fan Club earlier this year in preparation for the launch of Forever Sweet. There was a book launch at Britt’s Donuts on March 28th, the shop’s opening day for the 2014 season.

Britt’s Donut Shop is open seasonally. It typically opens on weekends starting in late March through Memorial Day. Then from Memorial Day until mid-August they’re open every day. After that, they scale back to just weekend hours (Fridays-Sundays). In late September they close for the season.

Don’t let a summer pass you by without a visit to Britt’s.