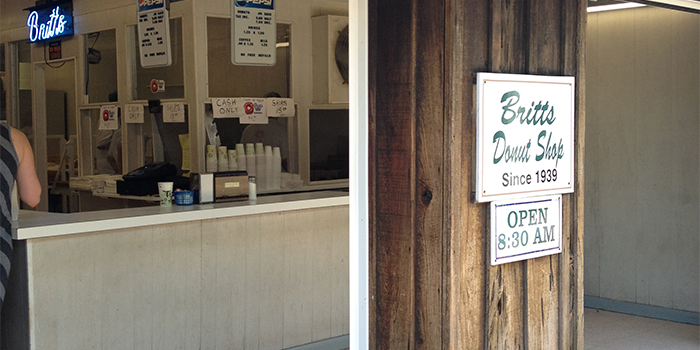 I thought it a bit odd the first time I heard of pairing doughnuts with the beach. But for many North Carolinians, that combination has become a tradition.

Those in Carolina Beach are loyal to Britt’s Donut Shop; if you go to the Outer Banks, it’s Duck Donuts. Either way, both make our summers more delicious.

Britt’s offers one-of-a-kind, handmade, raised doughnuts in one variety – glazed. Made from scratch, they follow the original 1939 recipe without using any premixed ingredients or preservatives. As you place your order or sit at the counter, you see doughnuts being rolled, cut, fried, and glazed. Served warm on a wax paper rectangle, or in a white paper bag, these tender, glazed confections make the expression “melt-in-your-mouth” a reality. 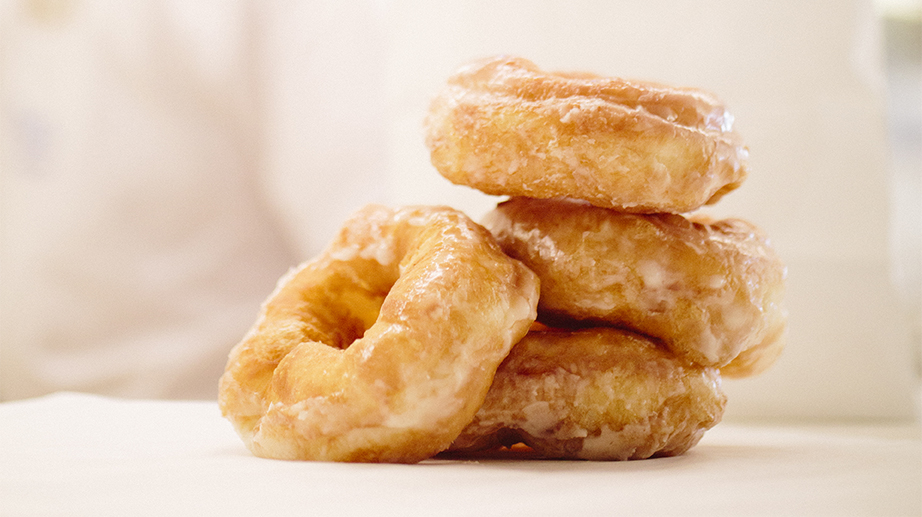 Britt’s frequently makes national top 10 doughnut shop lists. In the recent Saveur list of top U.S. doughnuts they were the sole doughnut shop listed from the Carolinas. H.L. Britt, whose photo hangs on the wall of the shop, opened Britt’s Do-Nuts in 1939. Originally, Britt’s was located on the other side of the boardwalk, where the arcade is now. In 1969 Mr. Britt moved the shop to its present location.

During the summers of 1954 through ’56, a teenage Bobby Nivens worked at Britt’s. After graduating high school, he went off to the Air Force and then on to a career, all while remaining friends with Mr. Britt.

“When he got ready to retire in 1974 he asked me would I be interested in purchasing the doughnut shop,” said Nivens. He couldn’t refuse, so he and his wife Maxine bought it that year.

“I asked him if he minded if I left his name up there – Britt’s – and he was real happy about that.”

I’ve sat at a lot of doughnut shop counters, and Britt’s has a special one. The counter and windowed walls that allow for views of doughnuts being made are from the original 1939 shop. The cutting board is the same one Nivens used as a teenager. Even the fryer and glazing rack are the original ones. Until a few years ago, the wooden rolling pin was also still being used. But when the interior hole became too large from wear, Nivens retired it. He now keeps it at home displayed on a stand.

So why do doughnuts and the beach go together?

“Growing up I always thought, why would anyone want to have anything hot in a hot environment like the beach,” said Nivens. “But it’s amazing; people really love the doughnuts. I guess now it’s just part of the beach.”

After listing a variety of reasons why someone would visit Carolina Beach, he conceded: “They come for the doughnuts.”

For Russ DiGilio, founder of Duck Donuts, doughnuts and the beach have always gone together.

It’s almost impossible to leave Duck Donuts without a box of their delicious doughnuts.

As a teenager growing up in New Jersey in the 1970s he frequently bought doughnuts on the Ocean City Boardwalk from Brown’s Restaurant. They had a doughnut stand with a small automatic fryer that made hot, fresh cake doughnuts with a choice of four toppings: chocolate, vanilla, cinnamon sugar, or powdered sugar. He remembers people lining up at 7 a.m., waiting for the shop to open.

After vacationing on the Outer Banks, he noticed there weren’t any doughnut shops. So he decided to open one and emulate what he experienced on the New Jersey boardwalk.

Customers at Duck Donuts also get to watch their doughnuts made. An automated machine drops rings of cake batter into the hot oil. The doughnuts float along cooking before landing in a large bowl. They sit for a moment cooling and waiting to be decorated by an employee.

Visitors select their glaze or frosting – chocolate, vanilla, plain, strawberry, lemon, peanut butter, and maple. Other toppings include cinnamon and sugar, powdered sugar, bacon, coconut, chocolate or rainbow sprinkles, and peanuts. When I visited they made my favorite, a marble doughnut (vanilla glaze with lines of chocolate drizzled across the top).

These fluffy, golden, cake doughnuts are not anything like their cooled counterparts available in most shops. Don’t underestimate the number you need to order. Even friends and family members who claim not to be crazy about doughnuts will want more than just one.

The first Duck Donuts stores opened in 2007. Kitty Hawk came first, followed soon after by a location in Duck. In 2009 and 2011 they added shops in Kill Devil Hills and Corolla.

DiGilio said the original goal was “to make it an Outer Banks tradition.” The stores’ many fans would agree they have achieved that. He admits, “I started this as a lark,” but he’s quick to credit his partner Robin Griffith, who was instrumental in the success of the business.

Both of these doughnut shops have seasonal hours that vary throughout the year. But this just adds to their charm and the celebration of summer.

Britt’s is open on weekends beginning sometime in March through Memorial Day and then every day until mid August. You’ll have to call to find out their exact opening date. By late September, they are closed for the season.

Duck Donuts’ hours also vary throughout the season. It’s always best to check their website for current operating days and hours for all stores.