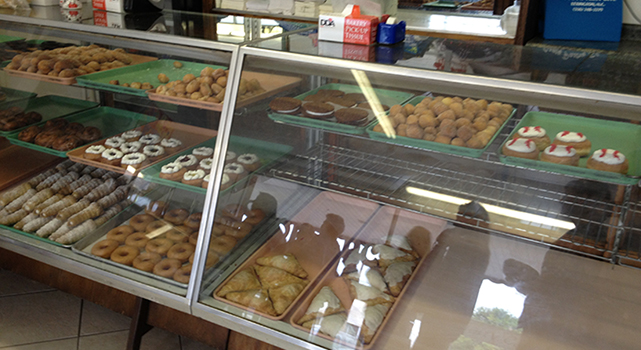 In Doughnuts: Where The Locals Go I wrote about three shops whose names do not necessarily indicate that they make doughnuts. It’s important to remember that not every bakery and pastry shop has doughnuts, but life in North Carolina is sweeter because these three multi-decade, family-owned shops in Burlington, Lexington, and High Point continue to make handmade doughnuts. 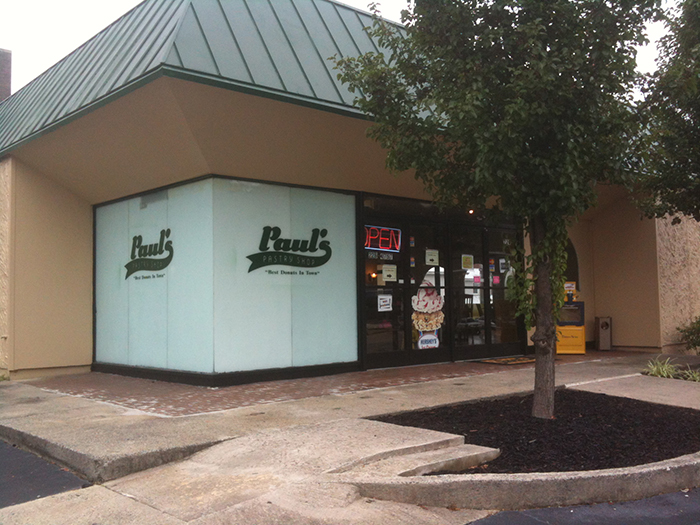 The claim of “Best Doughnuts in Town” on Paul’s Pastry Shop’s sign is a bold one, but until three years ago it was true since Paul’s Pastry Shop was the only doughnut shop in Burlington. As others have opened up, the handmade doughnuts from Paul’s, using the original recipe from 1942, offer a connection to the history of Burlington that the others can’t match. 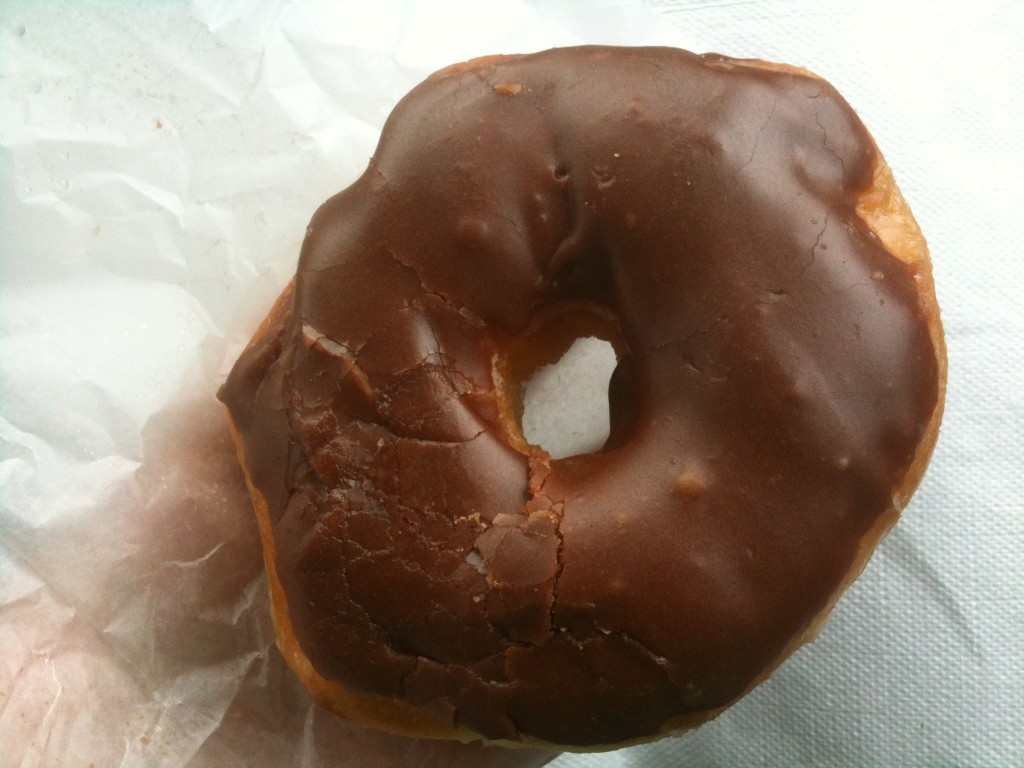 According to current owner Derek Spencer, the bakery’s original owner was named Phil. Mr. Spencer thinks it was called Phil’s Bakery then. In 1968, Paul Converse Sr. bought it, changed the name, and ran it until 1979. Converse’s son, Paul Converse Jr., was the manager of a mill and not interested in managing a pastry shop, so he sold the business. However, after a year it wasn’t doing well so Converse Jr. bought it back in order to honor the work his father had invested.

In 2002 Converse Jr. sold Paul’s Pastry Shop to Mr. Spencer and his wife Beth. They’ve made some changes in terms of the location, which now boasts a drive-through and seating, but they haven’t made any changes to the doughnuts. Mr. Spencer admits, “It’s really a doughnut shop” even though they also make and sell cakes, cookies, and other sweets. He says, “doughnuts have always been the number one seller.” 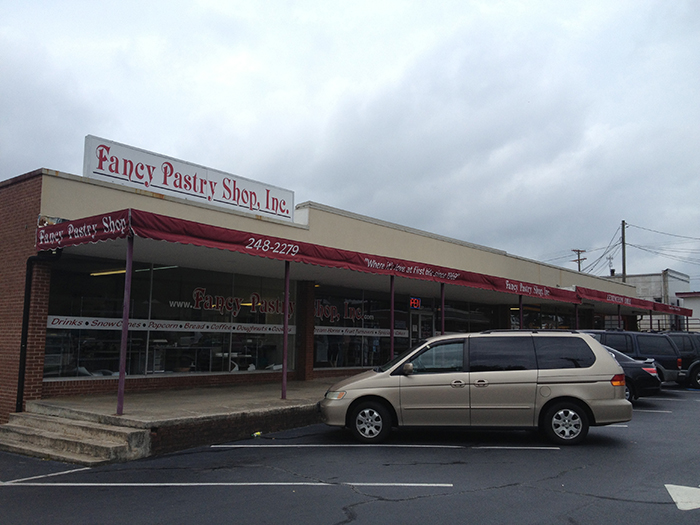 Bob Nelson, the man who started Fancy Pastry Shop, started working in bakeries at the age of 11. He bought a bread bakery on Center Street on the other side of Lexington before moving the business to West Second Street. While bread was the original focus, they have always made doughnuts, and those original recipes are the ones still being used today.

In 2000, Nelson’s son-in-law, David Rothrock, and his wife Tami bought the business. In 2003 they moved it to the current location on East Center Street. When I visited on a Saturday it was bustling.

From pies to cakes, and biscuits to cream horns, the doughnuts have a lot of competition for your sweet tooth, but they’re not to be missed. One of the first things I noticed about the doughnuts is their distinctive smaller size. Rothrock said this was due to the size of their 1960s-era original cutters. 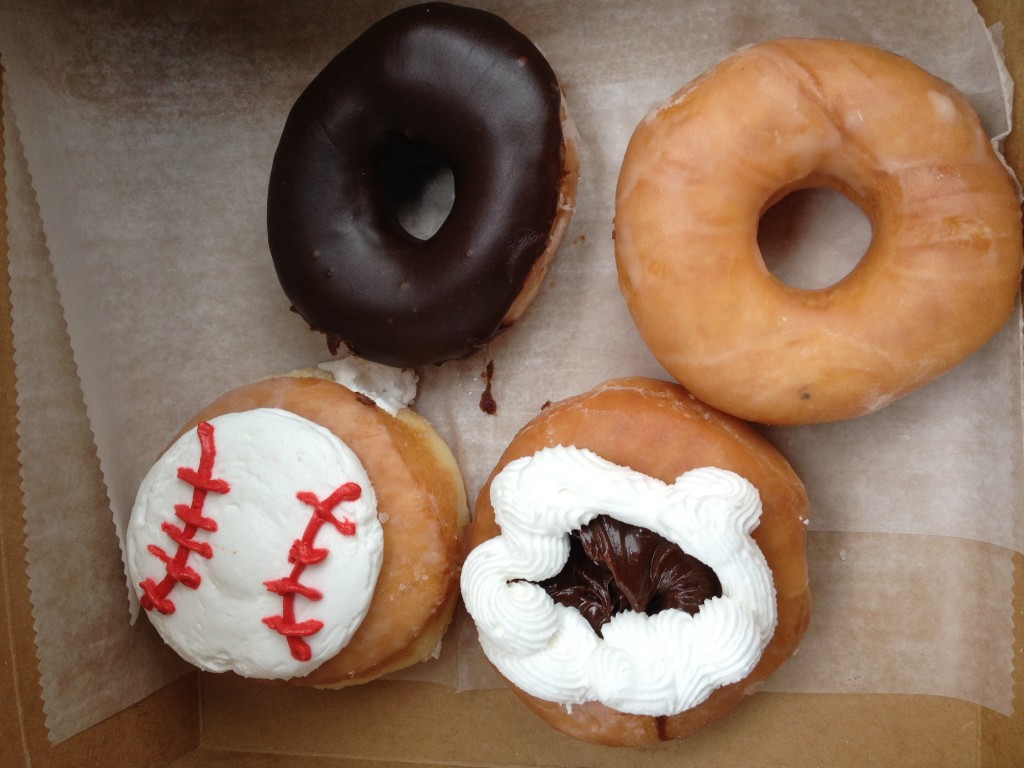 Rothrock grew up enjoying doughnuts from a local bakery in Thomasville. He admits, “I never thought about working in a bakery” but as the economy worsened and the area’s factories began to close, this former furniture carver became a baker. Each morning Rothrock, his son, and another baker cut the doughnuts, and the shop’s other staff members fry them. All of their glazes and frostings are made from scratch.

Their chocolate dip is topped with a smooth icing that is well balanced with the doughnut. Decorative icing tops others, which draws on the skills of their cake decorators. The day I visited I couldn’t resist the baseball doughnut. The frosting was delicious and a perfect complement to the modest raised doughnut underneath.

They also offer long and short johns, doughnuts with various fruit and frosting toppings, honey buns, and apple fritters. They make doughnut holes which include the option of adding a filling for just a few cents more. They’re not usually prepared in advance; you only need to request it. 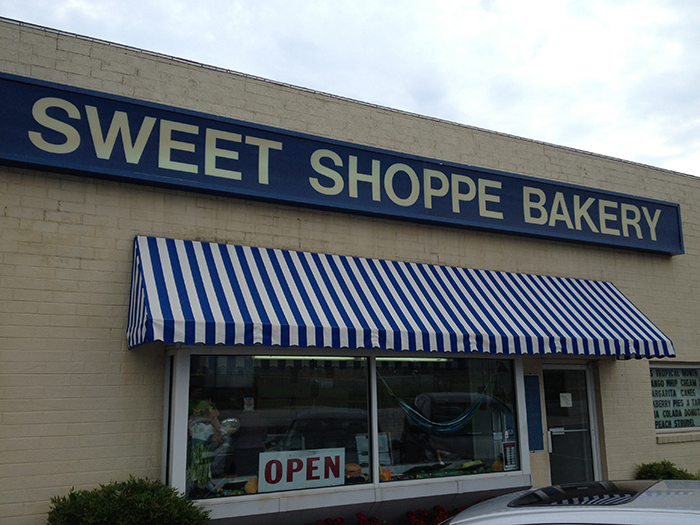 The Sweet Shoppe Bakery celebrated its 67th anniversary in September 2013. Today it’s not just a doughnut shop, but doughnuts gave the shop its beginning. High Point native James R. Sloop was stationed in Topeka, Kansas in the 1940s. He and his wife Helen often enjoyed doughnuts from a local bakery. The Sloops returned to High Point, faced with the question of what to do to support their family. They couldn’t forget those doughnuts so Mr. Sloop called the owner of the Topeka bakery to ask about their recipe, how to make doughnuts, and the supplies he would need. Lucky for us the baker provided him with all the details. Mr. Sloop invited his sister Ruth to join him and together they started The Sweet Shoppe Bakery. 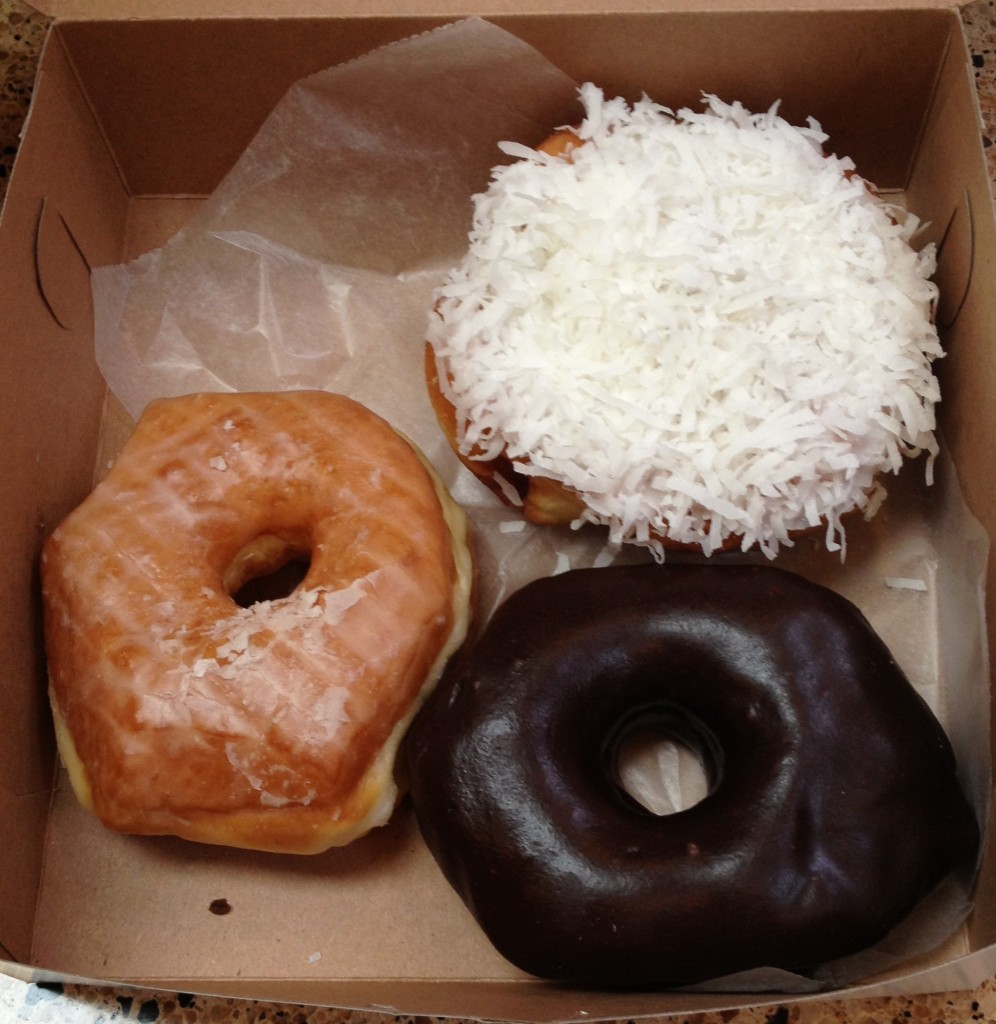 Their first customers were High Point’s furniture and hosiery mills. They sold doughnuts wholesale to the factories, and the factories sold them to their employees. Nationwide the market for doughnuts boomed after World War II since they were served in great abundance to soldiers during the war. When they returned home, many craved this sweet treat. The Sloops made 1,000 glazed doughnuts each night.

The first bakery was on English Road in the West End area of High Point. Over the years it’s moved around as more space was needed. Gradually the focus shifted from wholesale to retail and additional shops opened in Burlington, Greensboro, and other spots in High Point. In 1975 the bakery opened its Centennial Street location, the one that remains there today and bears a distinctive blue and white striped awning out front.

Currently the Sweet Shoppe Bakery offers five varieties of doughnuts daily: glazed, chocolate dip, chocolate cream filled, apple fritters, and fried cinnamon buns. The chocolate dip has a smooth frosting that completely covers the edges of the doughnut. Occasionally they offer a seasonally inspired variety. Last summer they made a piña colada doughnut that was one of the best fruit-filled doughnuts I have ever tasted. In the fall they usually offer a caramel doughnut.

Thanks to Rebecca Mann for sharing her discoveries of doughnuts at The Sweet Shoppe Bakery and Fancy Pastry Shop with me.