Eighty-five years ago, the scent of just-fried dough first lured passersby to the glazed goodies rolling off the conveyor belt inside a building on Main Street in Winston-Salem. Since Vernon Rudolph opened that first shop, Krispy Kreme’s signature hot glazed doughnuts have become a Tar Heel tradition. Many have followed the shops’ enticing neon signs declaring “HOT DOUGHNUTS NOW,” which ensure that folks in North Carolina, and, now, around the world, never miss out on one of our state’s sweetest treats.

At Kaleideum Downtown, an interactive museum with hands-on exhibits, kids can get a taste of what it’s like to make the famous original glazed. They send plastic doughnuts through a conveyor belt system, pack them into green-and-white boxes, and place them onto a replica of a Krispy Kreme delivery truck. 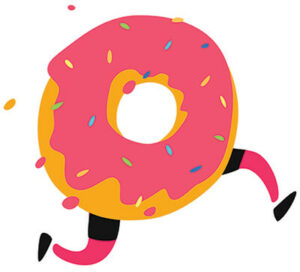 illustration by ANDREI ERMAKOV/ISTOCK/GETTY IMAGES PLUS

Every winter, brave runners gather at the Memorial Belltower at NC State University for a 2.5-mile race to downtown Raleigh’s Krispy Kreme, where they attempt to eat 12 original glazed doughnuts — and then run back. Described as “a unique challenge of both athletic and gastrointestinal skill,” this NC State tradition raises money to support North Carolina Children’s Hospital, donating tens of thousands of dollars to the cause each year.