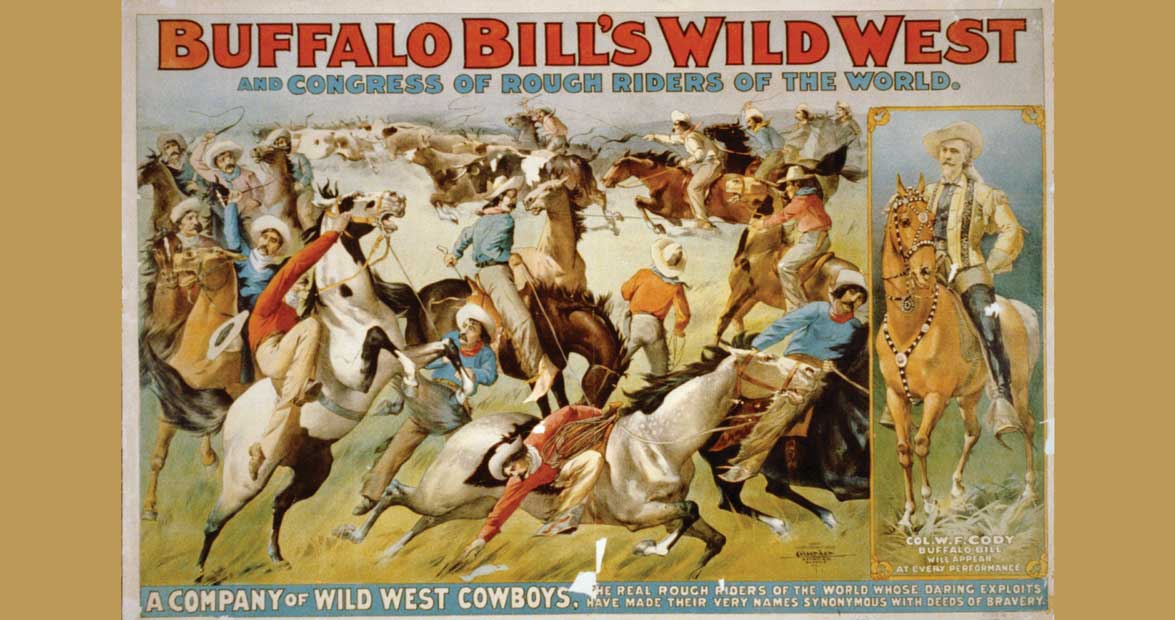 EDITOR’S NOTE: This story first appeared in the October 2011 issue of Our State.

Two trains pulled out of Charlotte in the early morning hours of October 29, 1901, heading north on the Southern Railway. On them, members of Buffalo Bill’s Wild West Show, having just entertained more than 30,000 spectators in the Queen City, rolled north toward Virginia. Danville was to be the final show of the season. But one of the trains never made it out of North Carolina.

Under a full moon, the lead train, carrying Col. William “Buffalo Bill” Cody in his own private Pullman car, moved swiftly toward Lexington. A second train filled with animals, roustabouts, and one of the show’s stars, Annie Oakley, departed later and lagged behind.

Roughly 65 miles north of Charlotte, Southern Railway Engine 75 chugged out of the Lexington station, heading south with a load of fertilizer.

Southern Railway’s mainline was a single track in 1901. As Buffalo Bill’s trains headed north, the freight train’s engineer, Frank Lynch, received a telegraph message ordering him to let the show trains pass. Lynch followed the order and pulled onto a sidetrack. But he missed the critical detail that the Wild West Show traveled on two trains.

After the first show train passed through Lexington, Lynch eased his locomotive back onto the main line. The engine picked up speed, traveling at about 45 miles per hour. As he rounded a curve, Lynch saw a sickening sight — a headlight charging toward him.

The second show train, with Engineer Bud Rollins at the helm, was traveling too fast to avoid the inevitable. Emergency brakes squealed. Sparks flashed as steel grated against the iron rails. Both crews jumped clear of the impending crash. Seconds later, near the Old Red Mill four and a half miles south of Lexington, the trains collided.

The impact knocked some of the show train’s five cars into Swearing Creek. Others lay gnarled in a jagged heap of metal in a cornfield owned by Linwood resident Wesley Young.

In an instant, a single human error sent hundreds of show horses and exotic animals to their deaths and sidelined one of the greatest spectator shows in American history.

Oscar Sisk, a retired railway man, came to the scene to help. He described for The Salisbury Post what he saw: “Two engines seemed to have tried to devour each other. One had run halfway inside the other, and then they reared up on the tracks like two giant beasts in deadly combat. All the cars on both trains were made of wood and were shattered into thousands of pieces upon impact.” 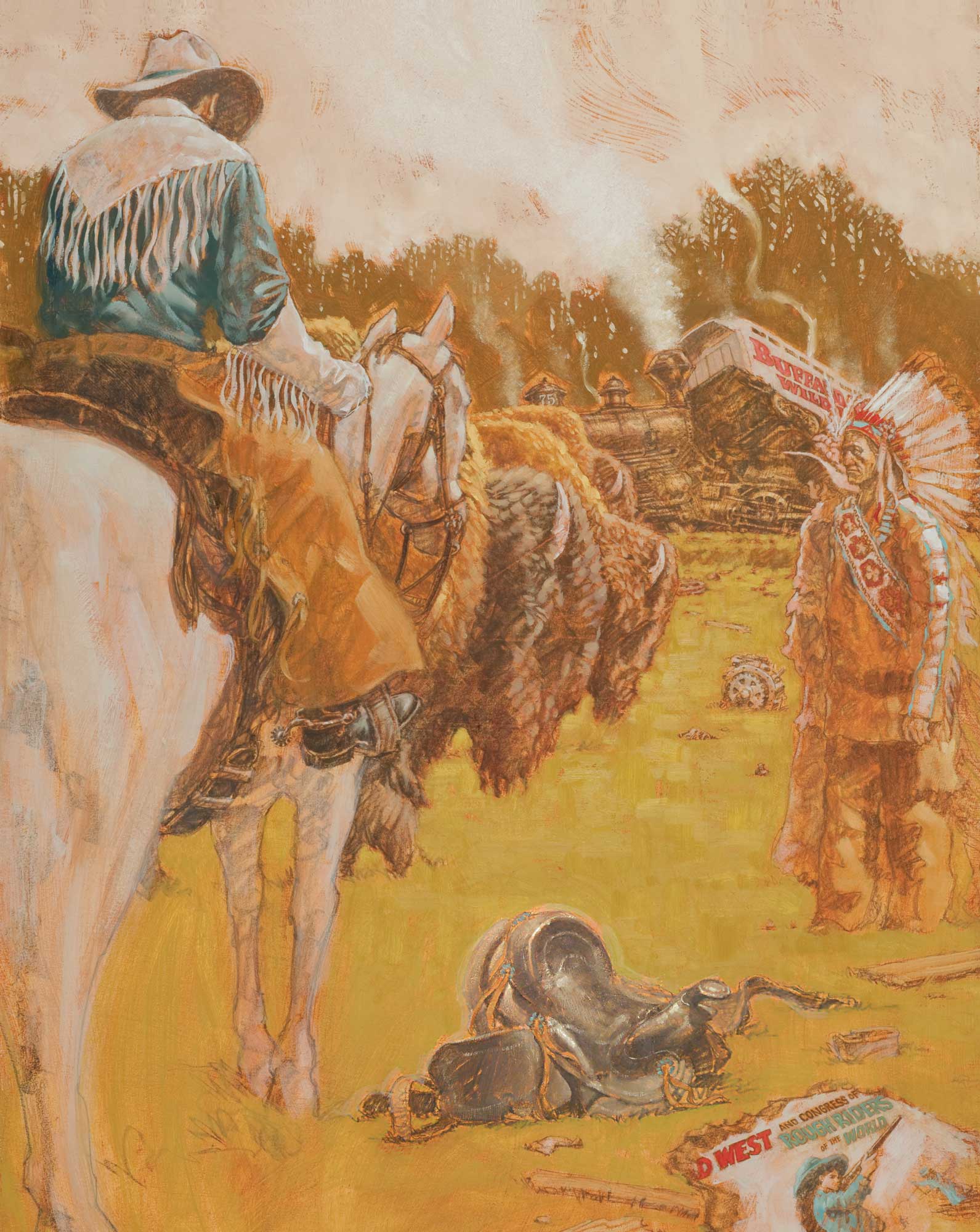 In the aftermath of the wreck show members — including cowboys who had been part of Teddy Roosevelt’s Rough Riders and American Indians from the Sioux nation — stayed in Linwood until they could return to work. photograph by David Stanley

No people died in the crash, but Cody’s show suffered catastrophic losses. Among the 110 horses that died, two were the showman’s personal mounts — Old Pap and Old Eagle — along with two stallions Cody received from Queen Victoria. Only two horses survived the crash. One of them was Duke, Cody’s favorite.

When Cody arrived at the scene, eyewitnesses say he blinked back tears as he told his men to get their guns and, “Do what we have to do.” One account says he pursued some of the freight-train crew with his gun drawn. Railroad reports show Lynch made his way to Salisbury where he hitched a ride on a train bound for parts unknown and escaped into anonymity.

When Wesley Young’s 19-year-old daughter, Belle, heard the crash, she grabbed her younger sister, Minnie, and ran down the road to the creek. As soon as they saw the disaster, they roused the rest of the family to help.

In the hours after the accident, the Young family went into action. Mrs. Young used the family’s bedsheets to make bandages. She also sent Belle and Minnie to the neighbors to ask for flour. Retrieving hams from the smokehouse, Mrs. Young cooked for the group, making biscuits with 100 pounds of borrowed flour and serving meat and eggs and vegetables until she ran out of food.

By morning, word of the great train wreck spread throughout the Piedmont, and crowds began to gather. Onlookers later described the aftermath as a scene from a western movie. Cowboys, some still dressed in their show regalia, herded buffalo into a nearby pasture. In an article published on the anniversary of the accident in 1961, then-72-year-old Willie Cox told The Salisbury Post what he remembered of the accident: “There were saddles, bridles, costumes, and other show equipment that had washed down the creek and were being gathered up and carried away by residents of the area.”

Cox said Cody’s first concern was for the show people. According to the Post article, Cody asked a storekeeper in Linwood to estimate the value of his entire stock, then purchased it, and turned it over to those who played cowboys and American Indians in the show.

“It was quite a show for the people of Linwood,” recalled Cox, who was 12 at the time of the accident. “Indians and cowboys camped in a pasture near the Linwood railroad station and walked back and forth to the store, carrying goods to the camp. Buffalo, horses, and cattle that survived the wreck were pastured near Linwood for several weeks.”

Wesley Young and his family helped Cody and his crew in whatever way they could. In addition to feeding the group and pasturing animals, the Youngs also put show members up in their barn overnight.

Cody was grateful and gave one of his surviving horses, Shoo Fly, to Wesley Young. Belle and Minnie told members of their church that it was the fastest horse their father ever owned.

The accident was not only a tragedy, but also one of the most dramatic events ever to shake the Linwood area. Belle Young, who lived to be 99, was known to regale her friends and family members with stories of the accident and the days that followed. She told The Salisbury Post in 1961: “We had a big time back then. I reckon I got to know them all. They stayed there a good bit.”

Annie Oakley, who was asleep when the accident spilled her car into a swamp on the north side of the track, was thrown from her bed and suffered extensive injuries. Early newspaper reports announced she was dead.

In a biography of Annie Oakley, Isabelle S. Sayers wrote that Oakley’s husband, Frank Butler, carried his injured wife to a railcar that workers set up as a temporary hospital. She went next to a hospital in Winston-Salem, where she received treatment for her injuries, including paralysis. Only after several surgeries and months of convalescence in a New York hospital did Oakley resume performing. 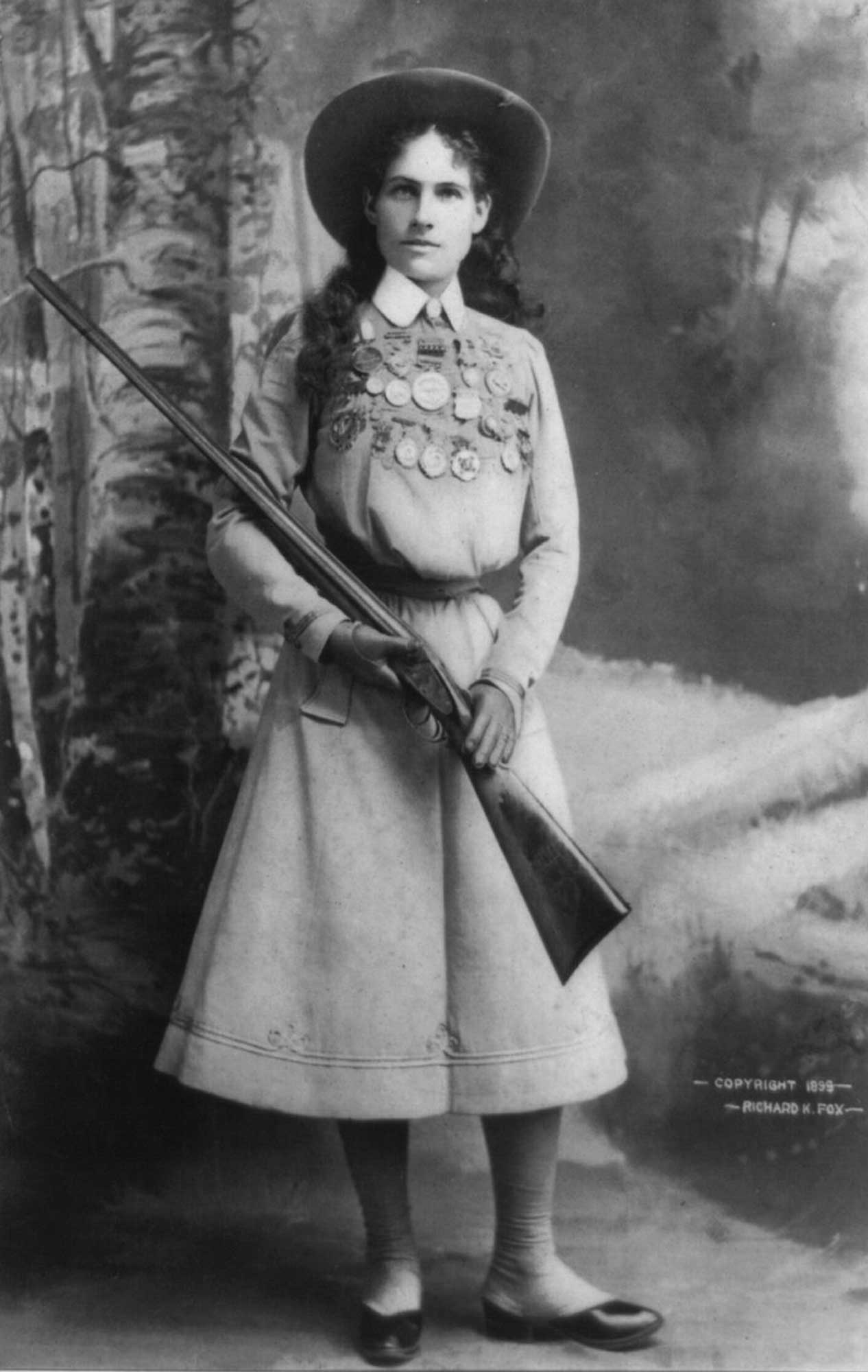 Although she and Cody remained friends, the train wreck marked the end of her association with Buffalo Bill’s Wild West Show. At the time of the accident, Oakley and Butler had been with the show for 16 years. In a letter to a friend, she wrote that the stress of the train wreck caused her hair to turn white overnight.

Oakley and Butler, a skilled marksman in his own right, moved to Pinehurst in 1915 and lived at the Carolina Hotel, where they taught hundreds of women the art of marksmanship and gave exhibitions on and off for the next seven years. In spite of her injuries, Oakley’s sure-shot expertise did not wane, and she continued to set records. In a 1922 competition, at age 62, she hit 100 clay targets from 16 yards away.

Cody sued Southern Railway, and the court ordered the company to pay him $65,000 in damages. The canceled show in Danville, Virginia, cost Cody $10,000 in lost ticket sales — money he would never recoup.

For nearly 20 years, the show struggled. Finally, in 1913, Cody turned the Wild West Show over to creditors.

Until the day he died, Buffalo Bill Cody viewed the Linwood accident as a calamity that forever changed his life, leaving an indelible mark on the world’s greatest showman — as well as the families who lived in central Davidson County.