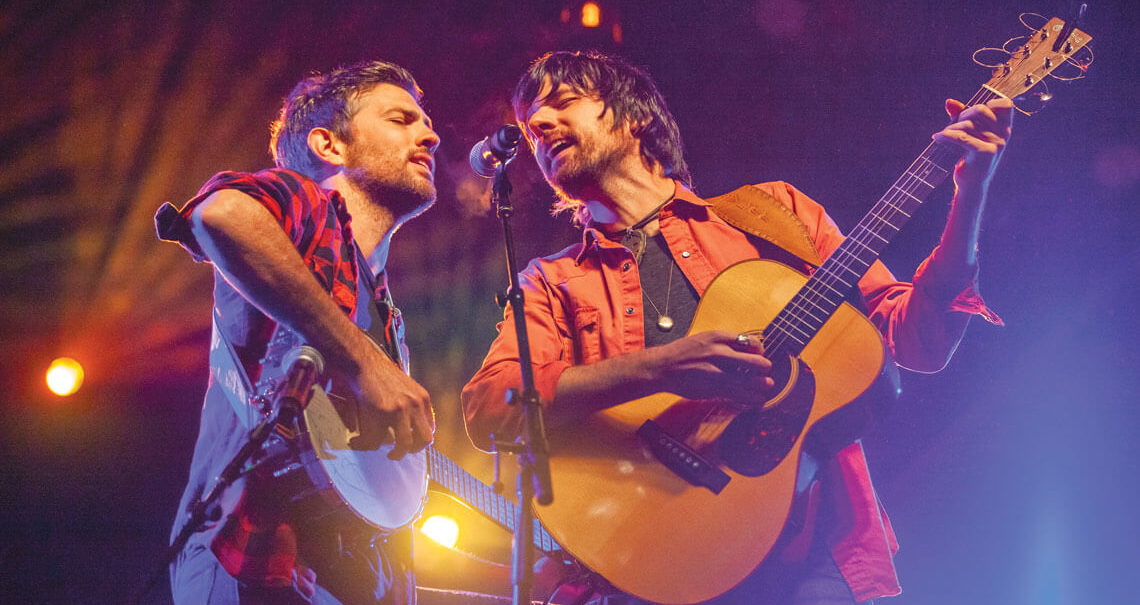 In their early years of making music, brothers Scott and Seth Avett would go looking for an audience wherever they could find one. They’d hoist an upright piano into the bed of Scott’s old 1971 Ford pickup truck and drive around North Carolina, performing in parking lots from Wilmington to Asheville. Or they’d set up shop on the streets of downtown Charlotte, near their hometown, Concord, and play for tips from bankers on their lunch hour. Few paid much attention, but within a decade, The Avett Brothers would be performing for sellout crowds around the world.

The Avetts adopted the tradition of busking because many of their North Carolina musical forebears started out that way: picking and singing between shifts at the mill or the tobacco warehouse or the local diner. While most sidewalk buskers remain anonymous, some of them — from the Deep Gap-born flat-picker Doc Watson to Durham bluesman Blind Boy Fuller to more contemporary artists like the Avetts — become American music pioneers. The settings of the busking spots where those artists have performed — on the sides of streets from Charlotte to Durham to Boone — played an integral role in the sounds that the players went on to create. Watson’s songs, like “Omie Wise” and “Tom Dooley,” drew from Appalachian folktales; Fuller’s “Working Man Blues” reflected the frustrations of Durham’s Depression-era factory laborers; and The Avett Brothers’ early statement of purpose, “The Traveling Song,” vowed, “I will travel ’til my country home is found.”

Even the smallest towns across our state have areas where musicians gather to play and people huddle around to listen. In the following five spots, musicians have made history. Or they will someday.

One day in 1934, businessman J.B. Long heard Blind Boy Fuller playing the blues on the streets of downtown Durham. Long, the manager of the local United Dollar Store, had recently arrived in town and was acting as an agent of sorts for commercial recording companies, whose records he sold in his shop. He showed up at just the right time. 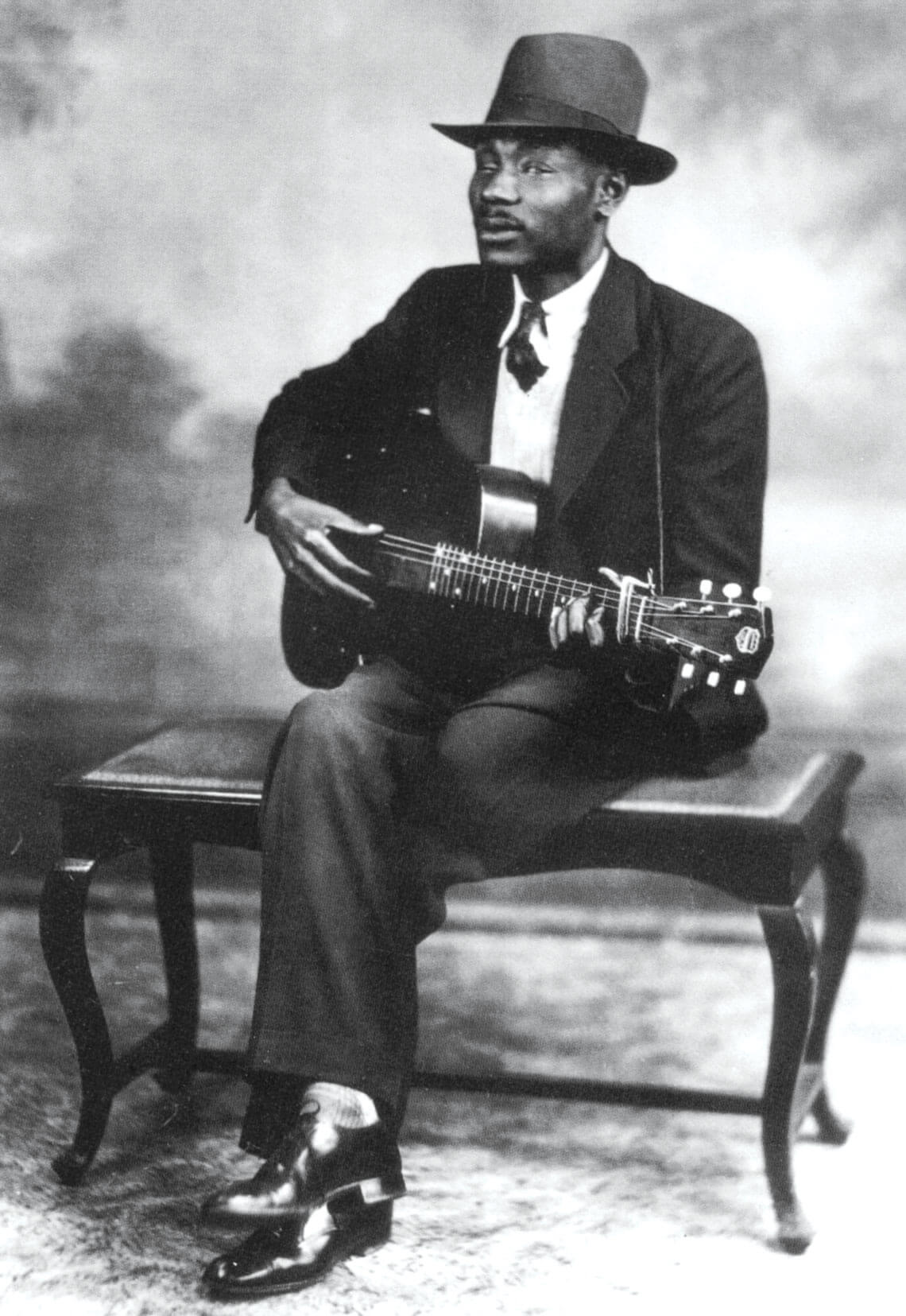 In Durham, you’ll find a monument to Blind Boy Fuller on the American Tobacco Trail. photograph by Pictorial Press LTD/Alamy

Durham was in its golden age of the blues in the 1930s, and Fuller was one of the musicians at its center. He would busk along with other players who congregated on street corners around tobacco marketplaces like Liberty Warehouse. The scene was especially bustling during the fall harvest, when Piedmont farmers would descend on Durham’s warehouses to sell their crops. Once there, they had to wait around for hours or even days to do business — a captive audience, drawing musicians and bootleggers eager to sell their wares. “The musicians tended to be welcomed by the warehouse owners, who were all trying to make their warehouses more appealing,” says Glenn Hinson, a folklore professor in the Department of American Studies at the University of North Carolina at Chapel Hill.

Few gave much thought to the importance of Fuller and his fellow buskers at the time, but they comprised a veritable blues music hall of fame. There was the Rev. Gary Davis, whose songs later would be covered by rock acts like The Rolling Stones and Grateful Dead; Sonny Terry and Brownie McGhee, who performed with American folk poet Woody Guthrie; and Floyd Council, who inspired the name of another later rock band, Pink Floyd. Long would take Fuller and many of the other blues musicians up to New York City for recording sessions, capturing their songs for posterity.

Fuller died in 1941, and the Bull City blues scene steadily declined as other major players passed away or moved on. The warehouses began closing down, too. Liberty, which stopped tobacco operations in the 1980s, was among the last standing. The building was finally torn down in 2014 to make way for Liberty Warehouse apartments, billed as the place “where Durham’s soulful history and cultural future converge.” An exterior wall of the old warehouse was preserved on the Rigsbee Street side as a decorative facade for the apartment building. It stands as a reminder of when tobacco and the blues both reigned in North Carolina.

About an hour and a half northwest of Durham is Eden, the Rockingham County town made up of the old mill villages of Spray, Leaksville, and Draper. The mill buildings are empty and crumbling now, but a century ago, the textile business brought the industrial revolution here. And where there were mills, there were mill workers in string bands playing the hopped-up, old-time musical style that eventually became bluegrass and country.

One of that era’s top groups was The North Carolina Ramblers, formed in Spray and led by the brash, banjo-playing showman Charlie Poole. The band had a string of hits, starting with the 1925 song “Don’t Let Your Deal Go Down Blues,” which remains a staple at bluegrass festivals. On payday Saturdays, at the close of the grueling five-and-a-half-day workweeks, The Ramblers would busk for change in front of the Spray Mercantile Building.

“They’d play for people coming to pick up their cash pay envelopes,” says Kinney Rorrer, Poole’s great-nephew and the author of Rambling Blues: The Life & Songs of Charlie Pool. “One lady told me she almost got fired once because she stood and listened to them play too long, and it made her late.”

The Spray Mercantile Building still stands today, alongside the now-silent mill buildings where Poole grudgingly worked between The Ramblers’ journeys playing music around the country. A rambling man to the end, Poole was the life of every party before he died from one binge too many in 1931, just short of his 40th birthday. 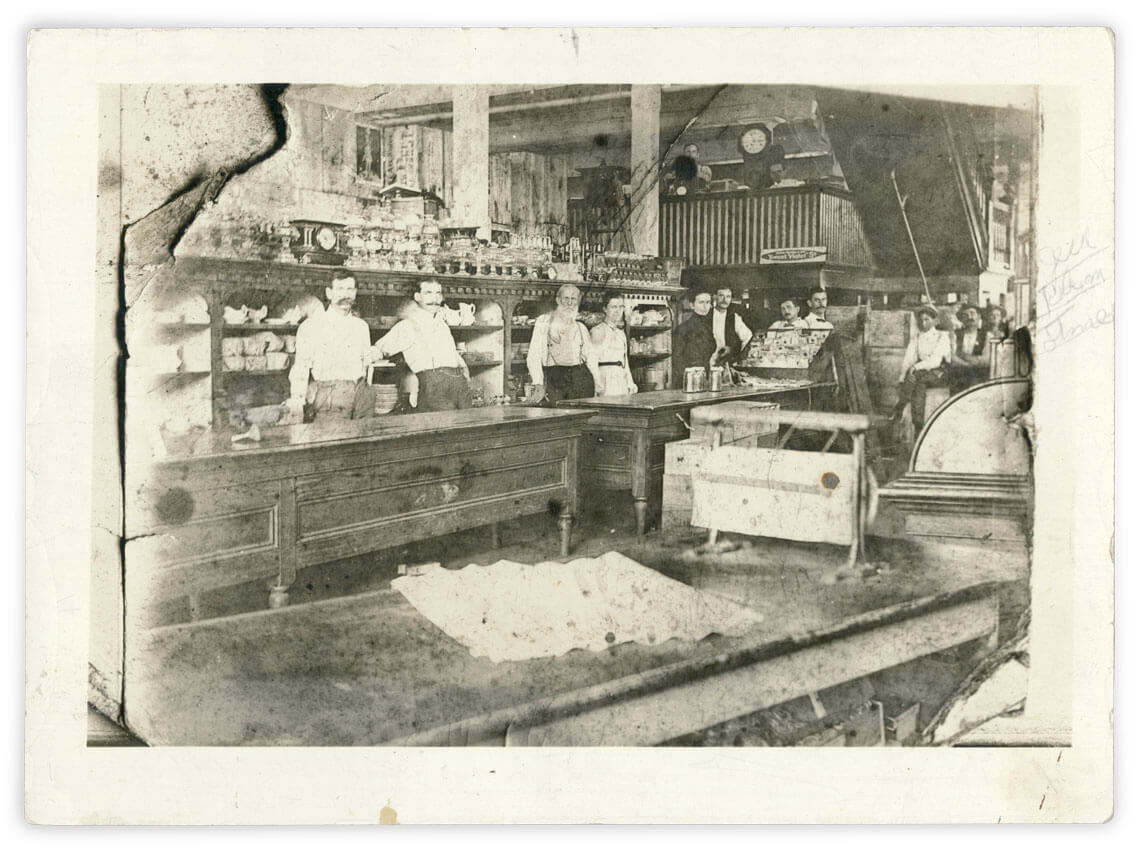 Employees at Spray Mercantile (above) pose behind the counter in 1890. Around the turn of the century, sounds of old-time music often mingled with the smoke that billowed from the tops of local mills pictured on an advertising card (below) for the Spray Water, Power & Land Co. photographs by Rockingham Community College

Head west out of Eden on U.S. Highway 421 for about 130 miles, and you’ll arrive in Boone, the college town where Appalachian State University students crowd downtown sidewalks. In front of a law office on King Street, near the Appalachian Theatre of the High Country, is a bench with a tribute to one of North Carolina’s most notable musicians: a sculpture of the late Doc Watson that celebrates his busking roots.

Early on, young Arthel “Doc” Watson was a blind man trying to make a living however he could. Music was one of the few career paths for the sightless, so he learned to play the guitar and took to performing on the streets around his Deep Gap homestead. He was a familiar sight in downtown Boone during the 1940s and ’50s. Hoping to attract spare change, he would play in front of the Watauga Bank, a cup of pencils set before him: Give Doc a coin, and you’d get a pencil — and a song. 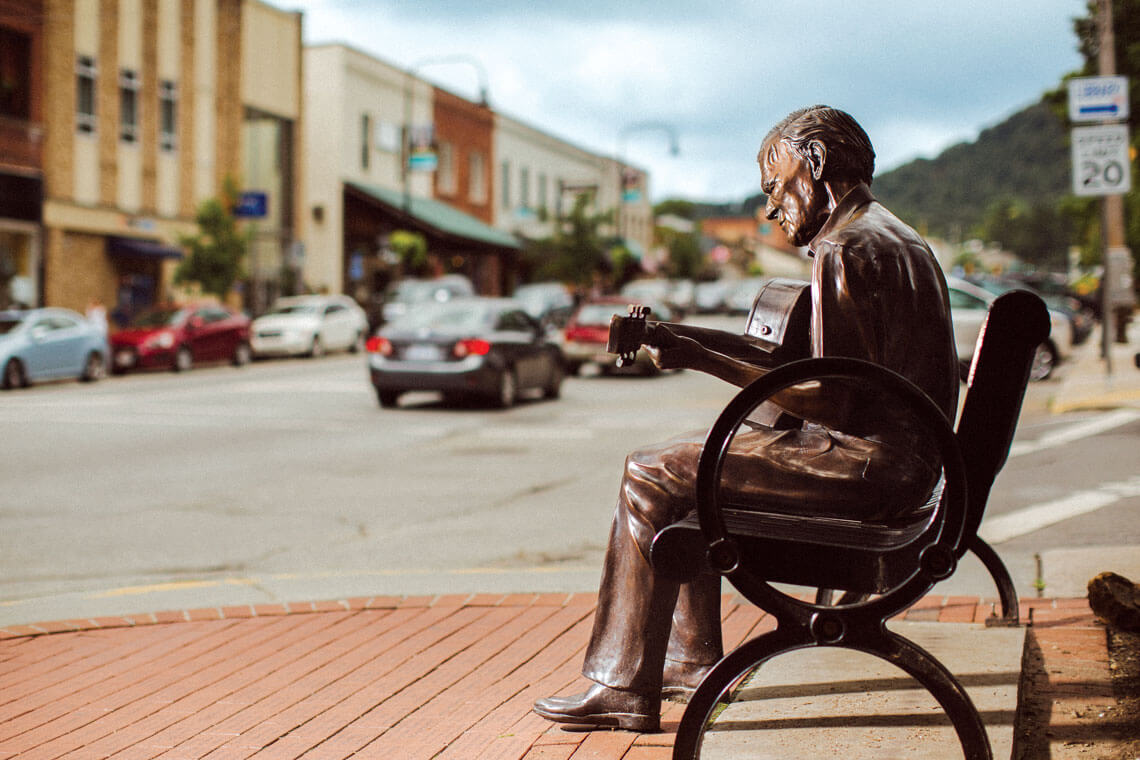 Watson began playing bigger stages in the 1960s, when he became a folk-revival sensation and a beloved regular at festivals. Although he’s been gone for eight years, he still casts a long shadow in our state — especially every April, when the festival he started in 1988, MerleFest, gears up in nearby North Wilkesboro. But Watson was modest. “Doc was not really interested in having a statute made of himself,” says Blowing Rock artist Alexander Hallmark, who sculpted the piece. The guitarist ultimately agreed — but only if the plaque read “Just One of the People,” and it does.

The sculpture was unveiled in 2011. When Watson died the following year, at age 89, fans covered it with flowers. Now and then, you’ll see the occasional busker there, keeping his music alive.

If you take the Blue Ridge Parkway south from Boone, past Linville Falls and Little Switzerland, you’ll see some of North Carolina’s most beautiful mountain views. You’ll also wind up in Asheville, where today’s musical descendants of Watson, Poole, and Fuller gather on the streets as part of the state’s most active current busking scene.

“The word has gotten out nationwide,” says Asheville poet, actor, and emcee Barbie Angell. “I’ll talk to buskers who came from Greenville for gigs, and touring bands will busk while they’re in town, too. It’s kind of a thing a lot of musicians do here.” Particularly in good weather, which brings crowds of tourists, students, and outdoor enthusiasts onto the city’s downtown streets, parks, and sidewalks. 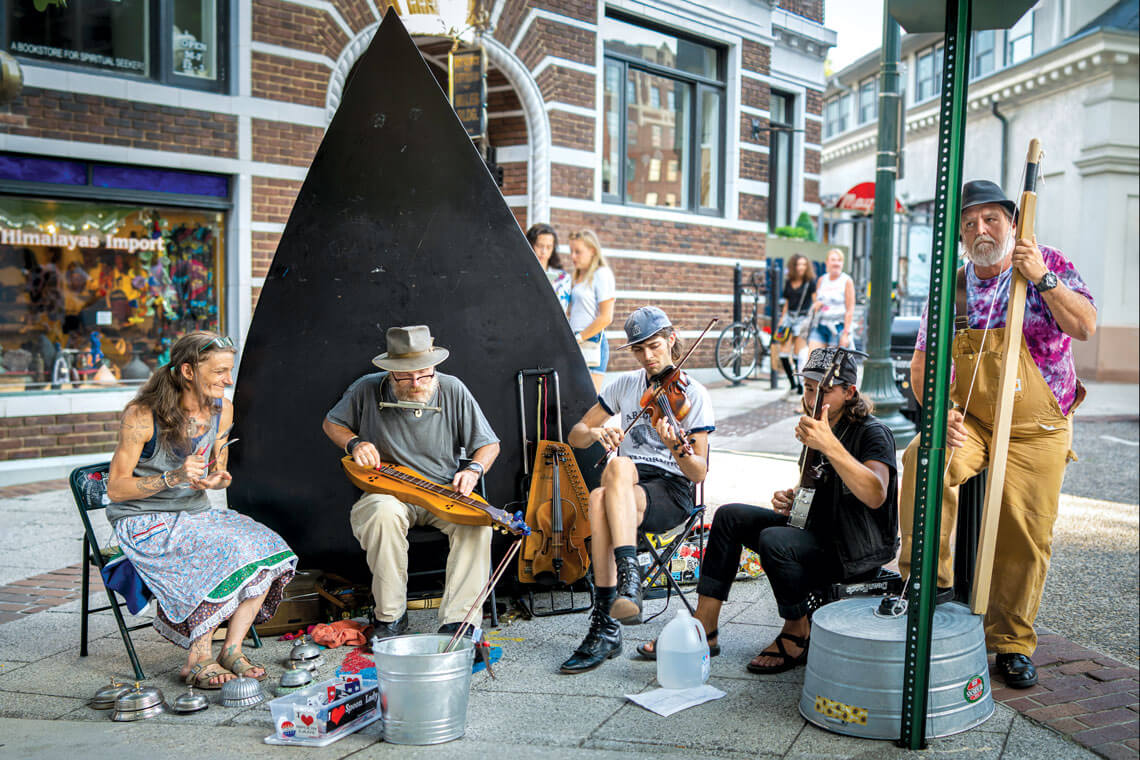 The Thomas Wolfe Auditorium even has a sculpted scene of a busking dance party. Just down the street, a popular busking spot is the Flat Iron — an iconic landmark since 1997 — sculpted by local artist Reed Todd. The Americana musician Pokey LaFarge, one of the bigger recent names to emerge from Asheville’s busking community, connected with his backup band there. By now, busking is such an essential part of Asheville’s fabric that there’s an online support infrastructure — Facebook pages like Asheville Buskers Collective.

To pianist Andrew Fletcher, one of the early leaders of the Asheville Buskers Collective, “The great thing about busking is that it takes out the intermediary between you and the audience.”

Even before they were well-known as The Avett Brothers, Scott and Seth Avett understood the need for a direct connection with their audience. So they played gigs everywhere, which frequently meant performing outside for change. They did enough busking that Scott has called it “a big part of our DNA.”

In 2002, the Avetts played outside the atrium of what was then Wachovia Bank as part of a regular lunchtime series. The area had more historical significance than the brothers realized: In a building just down the street, Bill Monroe, the father of bluegrass, recorded his first sessions in the 1930s.

Scott doesn’t recall the Avetts making much money busking for the business crowd that day. He says the group did a little better on a 2001 cross-country trip that took the Avetts to Seattle, busking for change along the way. The journey included a stop at the Grand Canyon, where they made about $100 in two sessions. But money was less the point than having the vagabond experience of not knowing where their next meal was coming from.

“We wanted to experience some type of traveling as a poverty-stricken journey where we didn’t know how we’d pay for food,” Scott says. “When you’re trying to muster up cash to get down the road, $100 is a big deal. It was a real rite of passage, something I felt like I had to do before giving myself permission to be a performer.”

Like their musical ancestors, the Avetts had to earn the right to carry our state’s musical torch. And busking on the side of a lonely street, or in the dusty parking lot of a grocery store, was the ultimate test.