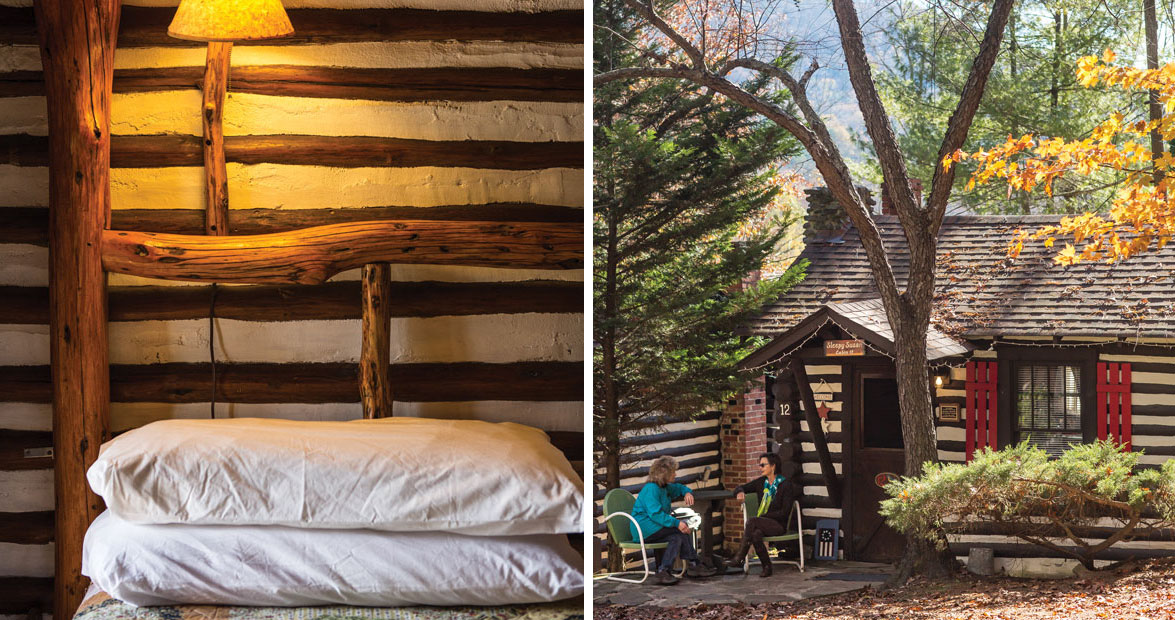 It was the North Carolina pines, dripping after a hard rain and breaking the sunlight into fractured beams, that captured Audrey Foster’s heart back in 1929. “We knew that we wanted this place the very minute we laid eyes on it,” she wrote in her diary. Smitten by all that she and her husband, Zeb, saw in the wooded acreage near Asheville, she waxed poetic in subsequent entries: Trees sang out in gladness with a gentle breeze, and sighed with alarm at coming storm winds. For the Fosters, the first owners of the shady patch of needle-covered earth that would become the Log Cabin Motor Court in Asheville, the pines were protection, promise, and a kind of prophecy, too.

The Log Cabin Motor Court today has a website, an online booking system, and a Facebook page, not to mention flat-screen televisions and a list of recommended attractions only a short drive away. And yet, stepping across the threshold of cabins named “Snuggle Inn” and “Hill Billy,” overnighters are transported back to a time when a little cabin in the woods was a great escape. When the symphony of a rainstorm passing through a pine grove was an evening’s entertainment, and the sunrise over a mountain trail could wash away all the loneliness of a solo hike across the hills.

“Sorry about the weather!” current owner John Maltry chirps as he strides into the property’s small wooden office on a brisk fall morning. The leaves underfoot have abandoned all their autumnal crispness; muddy rainwater pools on the path from the cabins to the road, where travelers once guided horses the last five or six miles to Asheville.

John, who bought the property with his wife, Maria, in 2002, spent more than 20 years working for an international health-care corporation at a job he says felt like “pushing elephants uphill.” It was full of risk and short on free time. One year, his company spent $40,000 on pastries for breakfast meetings. For a hands-on guy like John, the thought of spending the rest of his working life in front of a plate of Danishes was wholly unappetizing. 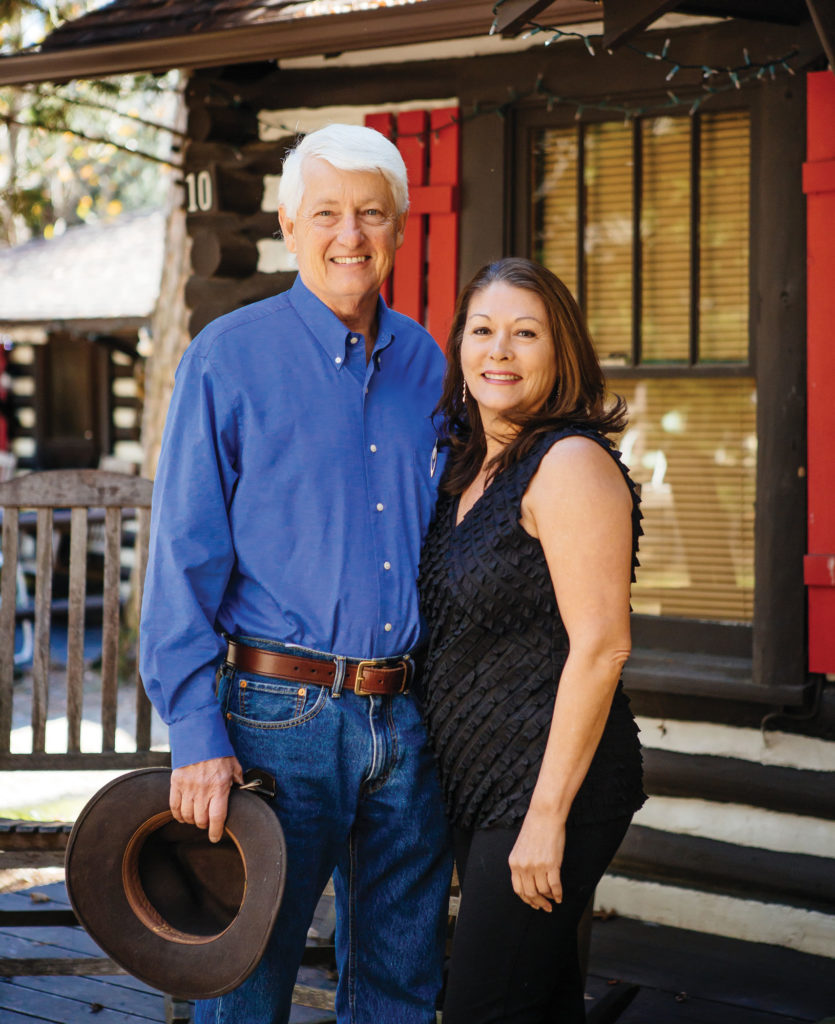 Owners since 2002, John and Maria Maltry fell for the property’s nostalgic feel. Six of the 18 cabins date back to the 1930s. photograph by Tim Robison

John remembered washing dishes as a kid in his parents’ restaurant in the west end of Asheville, near where a set of rustic old cabins were torn down and replaced with a big-box hardware store, then a Goodwill. He knew he couldn’t be the only one longing for a way to unplug and recharge, but it seemed harder to do as the years ticked by. He thought about those lost little cabins, and how few historic log cabins remained in the area. It seemed important to preserve a way of vacationing that put a premium on enjoying family and reconnecting with nature.

“It’s not just a business,” he says. “We got into it because [the Motor Court] was in disrepair, and we saw an opportunity to make it better than what it was. We did not realize we’d become preservationists.”

Seven decades earlier, Audrey Foster also credited happenstance for turning her serene, pine-studded land into a tourist destination. Travelers walking to Tennessee would sometimes ask to pitch their tents on the property, and a “chance remark from a satisfied stranger” led the Fosters to create first a campground, then a cluster of seven 10-by-12-foot pine, cement, and saddle- notch cabins for rent. Guests paid a dollar a night that first year, and walked uphill to a communal outhouse.

Tourism in the area took off after World War II: As families grew more prosperous and labor unions advocated for paid time off, cars became more affordable. With cheap gasoline propelling middle-class families down newly built roads in North Carolina, the region went from having about six drive-up motor courts like the Fosters’ to around 70 by the 1970s.

Then the trend reversed. Hotel chains sprang up along major highways, which now connected city center to city center, bypassing the little pine groves and lakesides that travelers used to come across by chance. Nearly all of the rustic log cabins like the ones John Maltry grew up seeing near his parents’ restaurant have been demolished.

“We represent a time when this kind of travel was really popular,” he explains. “One of my goals would be that 100 years from now, this place is still here, representing history the way it used to be.”

Plenty of families are helping him make good on that dream, by returning year after year to the cozy spaces where they’ve been making memories for generations. Like the couple who stayed in the same cabin every Easter to celebrate their wedding anniversary, even bringing live bunnies one season. Or the family who sold their homestead and now rents the whole place out for their annual family reunion.

“It kind of grows on you,” John says. “And this is a special place.” Under the Maltrys’ ownership, in 2017, the property received a designation on the historic registry. The couple makes sure updates and renovations are done with respect for the past, like the hand-carved bed they recently commissioned from a local carpenter for Cabin 5, “Midnight Roost.”

The Log Cabin Motor Court today has 18 cabins, most with a gas stove or fireplace, the largest boasting four bedrooms and a kitchen. Unlike the original configurations, guests can enjoy indoor plumbing. But like those earlier travelers, they can doze off to the sound of rain pinging the windowpanes and softly dripping onto a carpet of Carolina pine needles.

“There’s something about these old cabins. I don’t know if I could build one that has the same feel — the old floors, the old ceilings,” John says. “That’s why it exists. To take you back to how it used to be.”