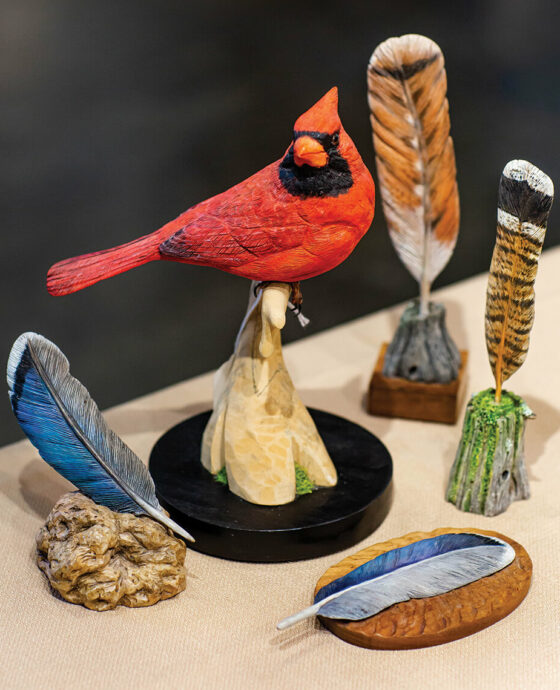 Ronnie McMahan sits at a table inside the Folk Art Center in Asheville, surrounded by special tools, protective gloves, and a woodburning gun that he uses to create stunningly lifelike feathered figurines. McMahan, known as The Redbird Carver, says that he often becomes so engrossed in his work that he loses touch with his surroundings. “I’ve been known to get on Planet Ronnie when I’m working,” he says with a laugh. “I sort of depart from the real world.” 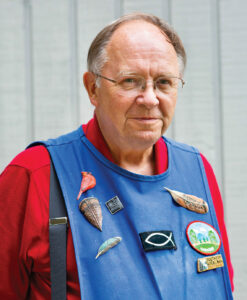 The Folk Art Center is a repository of Appalachian arts and crafts, showcasing works by hundreds of distinguished makers, just like McMahan, who coax beauty out of wood, mud, metal, fiber, and glass. Centuries of artwork live in the museum’s two floors of light-filled galleries: finely crafted pottery, handsewn quilts, paintings, and sculptures. There’s also a bookstore, a library full of information on Appalachian arts, and an auditorium for events and lectures. One of the center’s highlights is the Southern Highland Craft Guild’s Allanstand Craft Shop, established in 1895 and recognized as the oldest shop of its kind in America.

The guild, along with the National Park Service and the Appalachian Regional Commission, opened the Folk Art Center in 1980. Despite everything that’s housed inside the building, the traditions that the center celebrates are perhaps best understood right here on the first floor, just beyond the entrance. This is where artisans like McMahan bend over a chunk of basswood or a piece of pottery, pausing now and then to answer questions from strangers who wonder if their hands might also have the capacity to create such beauty.

McMahan began carving as a boy scout, but it wasn’t until 1979, when he received a life-changing gift, that he got serious about his craft. “A lady that I worked with, her brothers-in-law were the famous carvers Ansel Martin and Wade Martin,” he says. McMahan’s coworker gave him a wooden outline of a cardinal and said, “I want to see you do this.”

He set up shop in his kitchen and began collecting interesting stumps to use as bases for his figurines, and feathers to consult as references. Soon, McMahan was carving away, adding texture and detail with his woodburning gun. Carving became more than just a hobby — it was McMahan’s way of meditating. While working, he says, “days could pass before you realize it. Sometimes, I’m thinking about problems, about life stuff. Sometimes, I’ll get to praising the Lord while doing this.”

These days, McMahan bounces between 30 and 40 projects at a time. “People kept telling me for years that the Folk Art Center would sell my work,” he says, “but I didn’t think I was good enough.” He eventually gained the confidence to approach the center, and by the time he retired in 2012, he’d been accepted by jury as a full-fledged member of the Southern Highland Craft Guild. “The things that Ronnie carves are beautifully done and very accurate,” says Folk Art Center employee Laura Lanier. “We tease him that he does more talking than carving. He really enjoys teaching.”

“I want to encourage kids to use their hands — to make something.”

McMahan’s favorite part of the demonstrations is watching young people get inspired. One time, a preteen spent her allowance on one of his feather pins. He would have given it to her, he says, but her father was proud that she chose to spend her souvenir money on handcrafted art rather than a disposable knickknack. “I want to encourage kids to use their hands,” McMahan says, “to make something.”

He’s gotten used to entertaining repeat questions from visitors — like, How long does it take to complete a project? “The smart-aleck answer, which is the exact truth, is that it takes what it takes,” McMahan says. “The thing is, I don’t really know.” He pauses, then reveals the real reason he can’t answer the question precisely: He has to hold a piece close, as time and his knifework blend together, until it speaks to him. “It will come out and say, ‘Hello, I’m a wild turkey feather,’” he says, “and then I have to stop.” Both McMahan and the Folk Art Center are in the business of keeping the language of Appalachian art alive — if only we’re willing to listen.