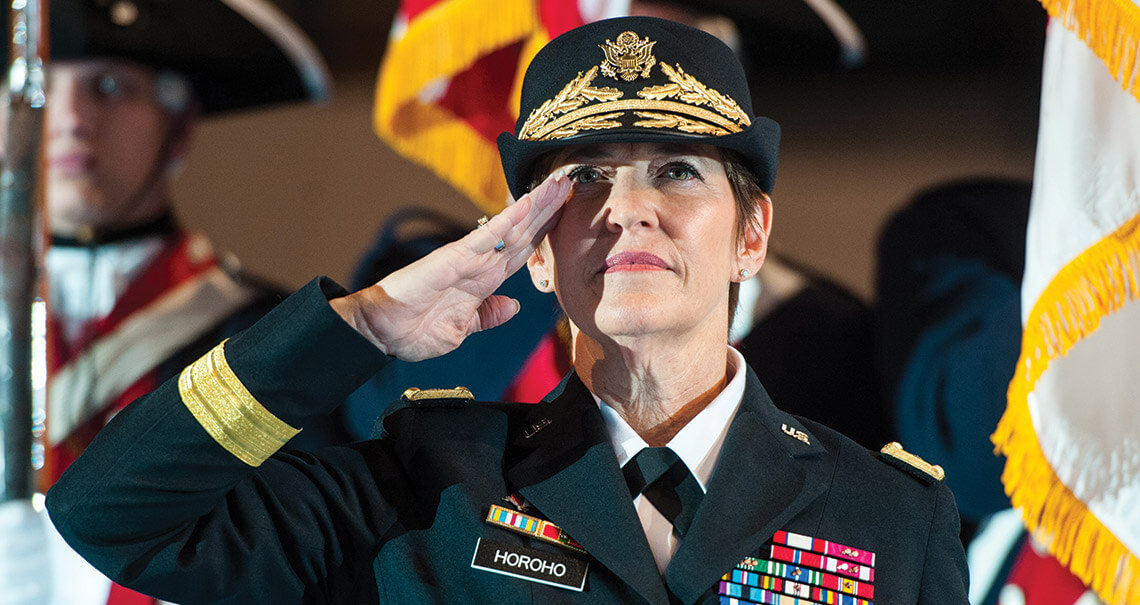 Despite the fact that Patty Horoho took her first breath on an Army base, and that her dad was part of the Greatest Generation and a three-time war veteran, and despite her upbringing in Fayetteville — one of the most military-friendly cities in the country — she laughs when you ask her whether joining the armed forces was a foregone conclusion.

“It wasn’t at all!” she says with a chuckle. “Think about it: When I was in high school, women did a couple of things. They were secretaries, teachers, or nurses.” They were not typically soldiers. When Horoho graduated from E.E. Smith High School in 1978, it had only been 11 years since the law capping women at 2 percent of the enlisted forces had been lifted.

So Horoho considered the slim trio of professional opportunities presented to her. (Initially, she’d wanted to be an airline stewardess, but she was too short.) She liked the idea of teaching and of nursing, and her mother and grandfather urged her into the latter — a profession that they said would allow her to make a positive difference in the lives of those who were most vulnerable. Her coursework at Appalachian State and then the University of North Carolina at Chapel Hill taught Horoho the era’s style of bedside nursing. But it dawned on her one day as she sat in the back of a nutrition class her senior year that she wanted to do something different. Something a little unexpected. Just for a little while.

“Trust me, everybody was a little shocked. But totally supportive. And I never regretted it. It was one of the best decisions that I’ve ever made.”

She met the Army recruiter on Franklin Street right across from Spanky’s and didn’t tell her family anything until after she’d applied. “Trust me, everybody was a little shocked. But totally supportive,” Horoho says. “And I never regretted it. It was one of the best decisions that I’ve ever made.”

The career move that Horoho thought would be a three-year diversion was the first step on the path to becoming the Army’s most successful nurse in its centuries-old history. In 2011, she assumed command as the Army’s Surgeon General — the first woman and the first nurse ever to hold the position.

But Horoho’s commitment to a military career didn’t start with awards and accolades. It started in a broom closet.

After a first duty assignment threw Horoho into leadership as the head emergency room nurse at Fort Carson, Colorado, she found herself unexpectedly transferred to be a nurse recruiter in Pennsylvania. They were some of the Army’s lowest-performing recruiting brigades, and the nurses in charge of them had walked out on the job or been fired. No one expected much.

“I’m gonna show them,” Horoho thought as she side-stepped into the office chair that had been crammed into the closet for her. “We are going to be successful.” A month or two later, she went to the battalion commander and told him she’d commissioned a nurse to join on active duty. “Well, you are 100 percent better than your predecessor,” he said. “She commissioned no one. Dismissed.”

Horoho had a new appreciation for the career that the Army might offer her. She could be both a nurse and a soldier.

A few months later, Horoho’s broom closet was empty. Her desk chair had a new home in the second-largest office in battalion headquarters. And Horoho had a new appreciation for the career that the Army might offer her. She could be both a nurse and a soldier, a manager and a leader.

As the 23rd Chief of the U.S. Army Nurse Corps, Horoho oversaw more than 9,000 nurses in active duty and the reserves. As the 43rd Army Surgeon General and Commander of the U.S. Army Medical Command, she led the third-largest health care system in the world, overseeing billions of dollars and more than 156,000 people across five continents. But her leadership style has always been grounded in the lessons of her hometown and her family: the military mothers and wives who stepped in with quiet strength to share in the good times and the sad ones; the grandfather who immigrated to find work in the coal mines and always reminded her to play “team ball.”

As she thinks of them, Horoho is reminded to see and value everyone who contributes to mission success. Like the housekeeper she spoke to while touring a hospital in Germany. “What do you do?” Horoho asked her. And the woman proudly replied, “I keep people well.” Never mind that her job was to sweep and mop, not save lives. Her work was critical. She was part of the team.

Horoho has been building strong, successful teams since her time as a nurse recruiter. And from those early assignments, every experience of her snowballing career seemed uncannily as if it were divinely delivered to equip her for the next.

Like the frustrating master’s degree research that forced her to become an expert on critical incident stress debriefings, trauma care, and comparative burn dressings. When she was reassigned to be the head ER nurse back at Fort Bragg in 1994, her studies led her to insist on intense planning for a mass casualty event — even planning a simulation that would test the hospital’s response to a mid-air plane crash with multiple trauma victims.

Weeks before the simulation was to commence, Horoho got an urgent call from the emergency room. Planes had crashed on the adjacent airfield.

Weeks before the simulation was to commence, Horoho got an urgent call from the emergency room. Planes had crashed on the adjacent airfield; casualties were coming in. “Oh, is this our exercise?” Horoho asked. “No,” came the answer. “This is real.”

The Green Ramp disaster, as it came to be known, was the most grievous loss of life suffered by the 82nd Airborne Division since World War II. An F-16 fighter jet collided with a C-130 cargo plane, and although the pilots ejected, the speeding, disintegrating F-16 struck another grounded cargo plane and punctured its fuel tank. The resulting fireball, laced with wreckage and exploding ammunition, breathed death down a corridor where 500 paratroopers were awaiting training flights.

Horoho sprang into action as 134 burn victims arrived at Womack Army Medical Center by truck, sidecar, and anything else that moved, their uniforms burned off, their airways too damaged to breathe. It was horrifying and tragic. And yet Horoho also saw, in people’s heroic and selfless acts, the best of human nature.

Horoho always thinks of Sgt. Daniel Price, a soldier who threw himself on top of another as the fire washed over them, then whispered in her ear to crawl out from under him and run to safety. She was able to escape and survive. He sacrificed his life for hers. “That’s the American spirit,” Horoho says. “That is, to me, the essence of Fort Bragg.”

Just as Horoho’s research made her uniquely prepared for a mass casualty event in Fayetteville, her deployment to post-earthquake Haiti — where she saw what a prolonged response to a public health crisis required — allowed her to spring into action on September 11 at her next duty station: the Pentagon. “If I had not had that experience, I wouldn’t have known what to ask for in the midst of the chaos,” Horoho says.

Looking back, Horoho strongly believes that God put her in those places at those times. Those experiences enabled her to be a better leader and a more impactful servant.

“The higher you go, what I’ve learned is, the more humility you should have,” Horoho says. “The more your lens should be outward.”