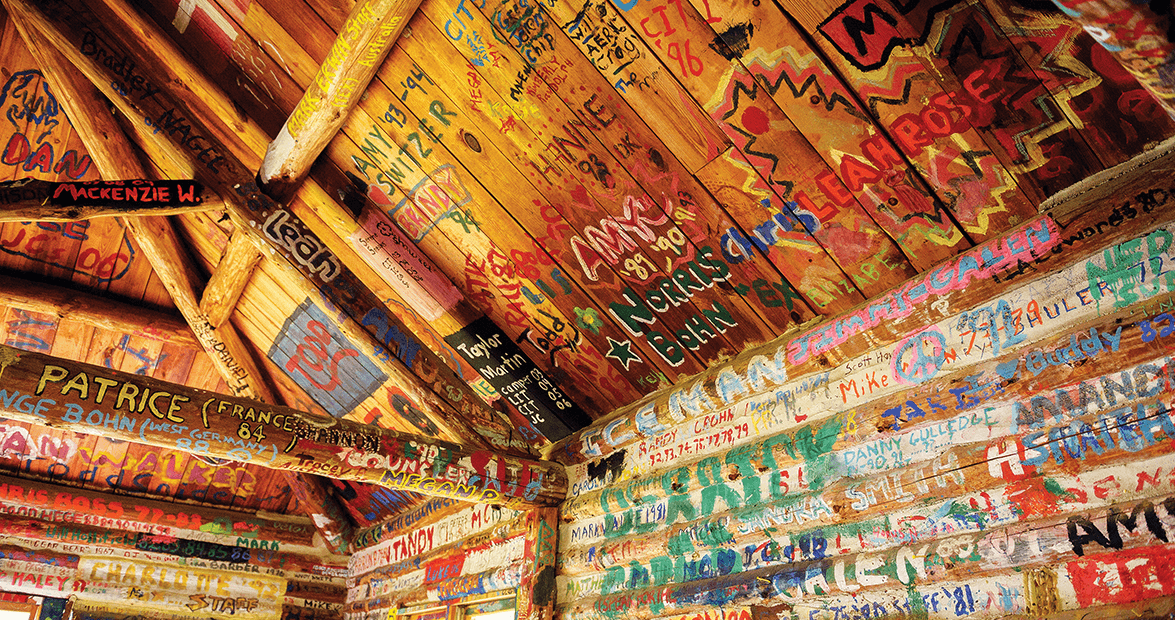 Editor’s Note: This story was originally published in the May 2013 issue of Our State magazine.

In my first novel, How Close We Come, I introduced Ruth’s character by describing her at a summer camp I foolishly called Kiawasee. Foolishly, because even now, years after the book’s publication, people ask, “Was that Yonahlossee?” Because, of course, it was. I was a Yonahlossee girl, and the experience is never far away.

Remarkably, in retrospect, my mother took me to tour summer camps in the North Carolina mountains, no differently than folks interview at different colleges. Ton-A-Wandah, Merrie-Woode, Greystone. In the end, I went where my cousins and aunts had gone. For weeks ahead of opening day, I admired the clever sections of my camp trunk’s upper tray: here would I pack my stationery, here the plastic soap box would fit just so, rolled socks would cushion the flashlight neatly tucked there. In those weeks, I talked to myself in the bathroom mirror as I brushed my teeth, pretending to be laughing with cabinmates as we communally brushed our teeth at camp.

I cannot believe I am admitting to this.

Just outside Blowing Rock, Camp Yonahlossee’s entrance was a sudden veer from Shulls Mill Road’s treacherous, scenic curves. Its cabins were bark-sided, bearing names such as Watauga, Den, Wickiup, X, Lakeview, Shangri-La, Paradise, and Cathedral. Raymond Carver’s famous short story “Cathedral” has no significance for me except as my home for four summer weeks. Every morning at Assembly, the middle-aged camp director, Jete, perennially dressed in royal blue pedal pushers and middy blouse, called out the cabin names. “Rocky Roost, Cher Chateau, Tower Up, Tower Down …” and the counselor of said cabin would say, “Here,” having located her charges somewhere on the bleachers or floor of the Main Cabin’s great room. If the counselor couldn’t spot a camper, she’d ask questioningly, “Betsy?” and Betsy would answer, and all would be well. I tried to be unobtrusive, hoping my counselor would call my name so that momentary spotlight would fall on me. And then we’d sing. The words to “Springtime and Yonahlossee” or “Yonahlossee Pep” were printed on long rolls of paper attached to tall dowels, which some lucky soul was assigned to carefully turn as the verses progressed.

The most central area of Yonahlossee was the lovely waterfall, a pretty little lake with a deeply shaded, rhododendron-hung path on one side, and a swimming pool whose plastic lining had been somehow suctioned to its floor, leaving wrinkles so thick and uneven that you could nearly grasp them with your toes. Along with correctly swamping a canoe while standing on the mucked bottom of the lake, girls swam endless laps in the pool’s frigid water in order to earn the privilege of Going To The Lake for four days and nights to ski and motorboat and do … I have no idea. I was from Rutherfordton. Why would I submit to those tortures when Lake Lure was in my backyard?

“Now don’t go up there and stay in the crafts cabin the whole time,” my mother cautioned. And I took that tennis racket in its clumsy wooden press, the wings of the nuts painfully stabbing my uncoordinated calves. But I gravitated helplessly toward its colorful confines of lanyard spools and paint-splattered tabletops, making and baking the de rigueur copper-enameled tie tack for my father, and to the Weaving Cabin, with its massive, foot-operated looms. I loved the precision of archery, the resulting chafe on my inner left arm, and the dank basement of the Nature Cabin, with its terrariums and snake skins, and looking for newts beneath the moss-covered rocks in the stream. And I drifted toward the high-ceilinged, rock-walled serenity of The Castle on a hill, where Creative Writing was overseen by a grizzled older woman with the improbable name of “Rat.” In cabins every evening we were required to fill out a weekly chart — presumably mailed home to parents — detailing what activity we’d attended each hour and I did so by flashlight, as behind her flimsy, fabric partition, the counselor dutifully filled out her chart, asking each of us in turn, “Did you take a shower today?” and, mortifyingly, “Did you have a bowel movement today?”

Between activities and before meals, we played tetherball. Tetherball courts were everywhere at Yonahlossee: among cabins, beside the tennis courts, outside the Dining Hall with its high, painted murals of the Blue Ridge Mountains, and where I experienced my first bowl of Cheerios and learned to eat cold white bread with butter when nothing else appealed. “Winners!” waiting spectators called beyond the circle of packed bare dirt surrounding the pole. I can still summon the satisfying thud of a fist in serving, the slap of a palm against the thick hide of the ball, the lightning speed of the rope twining around the pole.

We were mostly North Carolinians, but I recall Floridians, minor legends for being 10-week girls, at Yonahlossee for both sessions, the entire summer. Every camper was a member of an Indian “tribe,” and the banners and awards of Chippewas, Croatans, Tuscaroras, and Shawanos adorned the knotty, bare pine walls of the Main Cabin. Hierarchies existed, but they were gentle, and largely invisible. Cocooned in Shangri-La and Paradise, cabins so far from the center of camp that I never even glimpsed the buildings, where it was rumored pizzas were brought in and no lights-out rules were enforced, the older girls had an aura of their own. The riders knew who they were, arriving at Yonahlossee with their own horses and jodhpurs. The Durham girls dominated my age group, already wearing their fathers’ button-down shirts to sleep in while I was still wearing girlish nightgowns.

These were the mountains, after all, and the weather was often wet. I adored the pervasive gray dampness of a misty day, when dawn never became daylight and daylight never segued to twilight. Schedules were relaxed, and campers gathered in the Main Cabin, where a day-long fire burned, to improvise skits and sing along to someone’s guitar. The daily rest-period hour was extended, no doubt to give beleaguered counselors a break, and it was cool enough to curl up under my father’s scratchy, mothball-smelling, olive green army blanket and take an afternoon nap with the rain skittering on the roof.

You don’t stop being a Yonahlossee girl. A friend who, one summer, was the Chief presiding over the solemn, mystical, Sunday night Pow-Wows, will rise after that extra glass of wine, throw back her head, lift her arms to the heavens, and intone in an eerie sing-song, “Wa ah ta ho, maui ta la no.” (She still won’t tell me where the echo came from, or how that bonfire magically lit — WOOSH! — without a match in sight.) I wear a Camp Yonahlossee t-shirt to the gym, and a man recently stopped me to ask about it — could he get one for his wife, who still spoke of her summers there? On girls’ trips, we feud companionably with the Raleigh girls who are part of the Camp Merrie-Woode cult. On summer nights at Lake Waccamaw, the summer place where my husband (a Camp Morehead boy himself) has a cottage, I hear the tree frogs and am instantly transported to Yonahlossee, and the singing of taps, and the mournful clang of the massive bell bolted outside Jete’s office. Even though Camp Yonahlossee closed in the ’80s, after more than 60 summers, and even though its acreage is a beautiful mountain residential community, the waterfall still splashes over the rock walls and its campers never leave.

Except, of course, they do. Just as I’d grown old enough to join the privileged echelon of Shangri-La girls, who sang the younger campers back to their cabins after Pow-Wow, and were deemed mature enough to hold paper-collared candles reflecting prettily on the dark lake surface, my mother declared it was time to be “well-rounded.” Off I went to Camp Seafarer, in Arapahoe on the banks of the Neuse River. At Seafarer I learned all knots and the nomenclature. I earned the badges and ranks for Mile Swim and Sharks Teeth Club, and Flipper Skipper. After Seafarer came the tennis camps in Black Mountain, and at Pfeiffer College.

But alas, they didn’t “take.” One-sided instead of well-rounded, I grew up to be a writer who includes a reference to my first true love in nearly everything I write, who still lifts rocks in hopes of finding a tiny orange salamander, and who knows all the words to “Let There Be Peace on Earth,” from her Yonahlossee days. 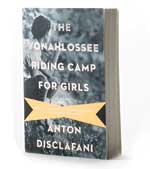 The Yonahlossee Riding Camp For Girls by Anton DiSclafani. Riverhead Books. 2013, 400 pages, hardback, $27.95.While the Great Depression holds the country in its iron grip, the privileged campers at the Yonahlossee Riding Camp for Girls in Blowing Rock are largely insulated from hardship. Still, 15-year-old Thea — who has been sent to the camp in the wake of a family tragedy — suffers deeply. Angry over her exile, desperately missing her twin brother, and overwhelmed by the aftereffects of trauma, Thea vanquishes her vulnerability and comes of age in this strange place. But despite her drive toward self-preservation, we learn — along with Thea herself — that tragedy is life-altering. In this sense, Thea is like her country; the hardship may have come and gone, but nothing will ever be the same again.— Evonne Lack