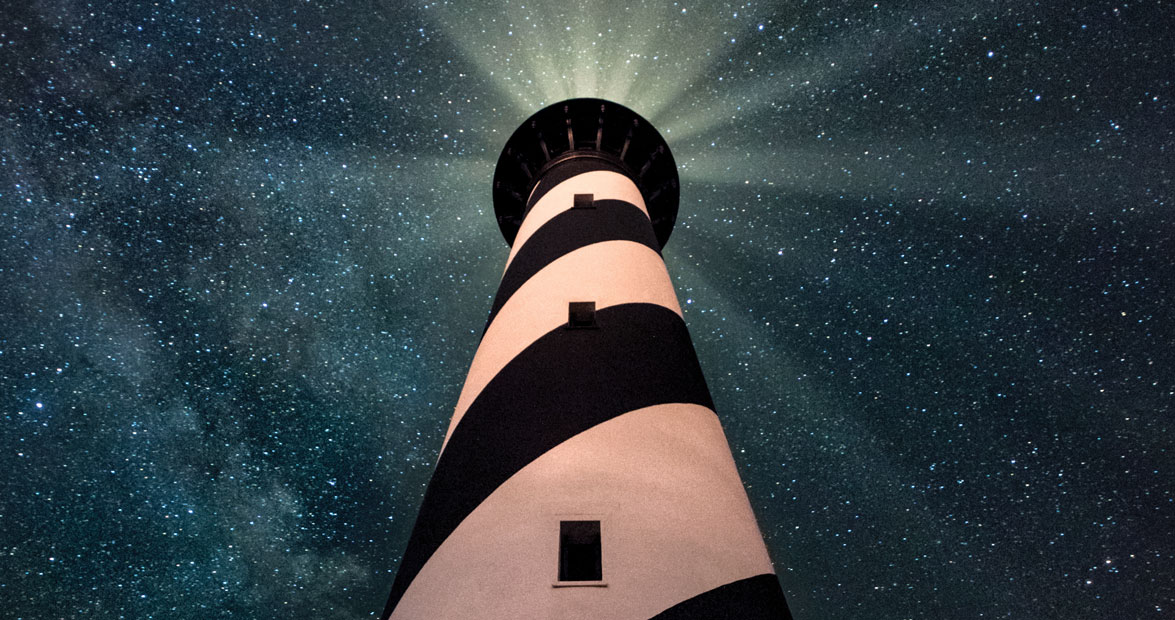 Years ago, when I heard that the Army Corps of Engineers was going to move the Cape Hatteras Lighthouse about half a mile inland ahead of the advancing ocean, I was overcome by a sense of alarm. The thing seemed impossible, a disaster waiting to happen. I imagined the scenario over and over again: the glacial movement of the towering brick structure, then the first tremor as the spiral-painted obelisk twisted ever so slightly and, in cinematic slow motion, began to disintegrate — till all that remained was a rubble of white and black bricks.

Why did I care? Because for me the light was — and still is — a personal beacon that guided my tenuous journey from boyhood to manhood. Immutable, lasting, solid, permanent.

At 18, having survived a two-year sentence at a Catholic high school in Delaware and a bullying dean of students who did his best to break my spirit, I left home. I didn’t exactly run away — my parents knew where I was going — but I didn’t ask their permission and, except for a few weeks each summer during college, I never lived in their house again.

I didn’t know exactly what I was looking for, but whatever it was couldn’t be found anywhere close to home.

I stuffed a sleeping bag, extra clothes, a canteen, a butane stove, and a notebook into a red Kelty backpack, grabbed my old Gibson 12-string guitar, and slipped aboard a Trailways bus bound for New Bern. From there I hitchhiked to Cedar Island, ferried to Ocracoke, hitched another ride that took me across another ferry and at last to Cape Point Campground under the pale of the Hatteras Light.

My home that summer was a blue, nylon pup tent that I’d bought at J. C. Penney for $26. The first thing I did after pitching my tent was hike across the dunes and up the beach to the Point, the sharp spit of land that forms the crux of the island. From there it was a short trek up the beach and across the dunes to the lighthouse.

In those days, it was always open in daylight and free to climb.

I had been to the island many times as a teenager, and each time, the first thing I did on arrival was climb the 248 iron spiral stairs to the catwalk. From there opened a spectacular panorama down the beach toward the colorful campground, up the beach toward the strip of cottages called Avon, and especially across the creamy, rumbling shoals out into the Atlantic. I would take a deep breath and grin, feeling the world open up, the weight of my cares suddenly lifted and carried away on the brisk and salty breeze.

Always before, I had come to the island with a neighbor family, one of the customers on my paper route. Now I was alone, and I recall the exhilaration I felt — finished with the harsh regimen of a demeaning school, off on a grand adventure to discover what would come next, and beginning the journey here, in the windy sunshine more than 200 feet above the roiling sea.

My funds were limited, and even the $3 campsite fee quickly broke my bank, so I shared a succession of sites with other campers.

The first was a gang of young men and women who all worked at a beef-and-beer joint in Baltimore. They erected a large “M*A*S*H”-style Army surplus tent next to mine and furnished it with cases of beer — stacked into pallets to sleep on, arranged into seating and tables. As their two-week vacation wore on, they gradually drank up the furniture, till at last we were all sitting in a circle on the sandy floor.

Each day we’d drive out of the campground and over to the lighthouse beach, where we’d launch their six-person military surplus raft and ride the wild breakers into shore. Far out at sea, a storm was kicking up eight-foot swells that combed into shore, slapping us upside down in the shallows.

Next I camped with a gang of Florida surfers, who had come north in a Chevy van tricked out with shag carpet and a monster stereo. They were astonished that I had never learned to surf, so they taught me. I paddled out beyond the breakers on a 10-foot-long board and spent the day tumbling around in salt water, wipeout after wipeout, until at last I teetered on the board for a few moments and actually caught a ride before being swept under again, the untethered board rocketing to the beach without me.

The days passed in brilliant sunshine that hammered the treeless campground at midday, driving us under our tent fly or into Buxton village to lounge in the shade by Aydlett’s store, sipping Yoo-hoo or Coke and watching the tourist traffic motor past.

And each night, I’d haul my Gibson guitar across the dunes to a spot just above the high tide line, and we’d build a bonfire out of driftwood and storm wrack, old boards that washed up on the beach. The same spot, the same fire, every night for months. I played songs by James Taylor and Gordon Lightfoot and some I wrote myself, and a dozen or more people lounging in the flickering shadows would sing along with the ones they knew and pass out cold beers or fill Dixie cups full of apple wine — the first of either one I ever tasted.

The nights went on and on, and the summer felt like forever. Only the people came and went, and I felt like I belonged to all of them and they to me.

And always, on those purple, starry nights, with fast clouds scudding across the moon, I felt the comforting thrill of watching the lighthouse beam compass across our horizons, as if it were watching over me personally.

By late summer, I was camping with a group of young people from Connecticut, New Jersey, Virginia Beach, and elsewhere, who had all teamed up to share the site and create a common food fund. We’d each throw in a couple of dollars and take turns shopping and cooking for the gang on their Coleman stove or the built-in charcoal grill that came with the site. One night toward the end of our stay, a few of us musicians gathered under a tent fly — two guitars, an acoustic bass, a harmonica, a couple of terrific singers who knew harmony. We played by lamplight for a little while, and when we ended the song, applause crackled out of the darkness from an invisible audience of campers who had gathered on lawn chairs and blankets to listen.

Before heading north again, I stopped at the lighthouse one last time. I didn’t climb it, just stood at its base, looking up into the carousel room floating in the bright sky. I was deeply tanned, feeling strong and clearheaded, aware that I had arrived somewhere not on any map. Then I shouldered my pack and guitar, stuck out my thumb, and headed home to college.

But I was not the boy who had left. It’s hard to describe the change I felt. I had done nothing brave or extraordinary, but I had created an identity for myself independent of whom my family or teachers thought I was. Just say that I never again lacked confidence, not deep down, and I knew that wherever I went, I could count on myself. That I could find the ordinary courage to be alone among strangers.

Now I keep a wooden lamp shaped like the Hatteras Light on the shelf in my study — cheesy, sure. But to me it’s a souvenir of that final summer of my boyhood, and every time I turn it on, I smile.

The engineers eventually did move the lighthouse — all million and a quarter bricks of it, nearly 5,000 tons. And it didn’t topple. It stands — whole, as I do, in a new place.

Not long ago, I climbed it, and I can still feel the stairs mapped into the muscles of my legs, a physical memory of exertion that brought back the old exhilaration of stepping out into sunlight at the top of the world, at the apex of the great adventure of my life.