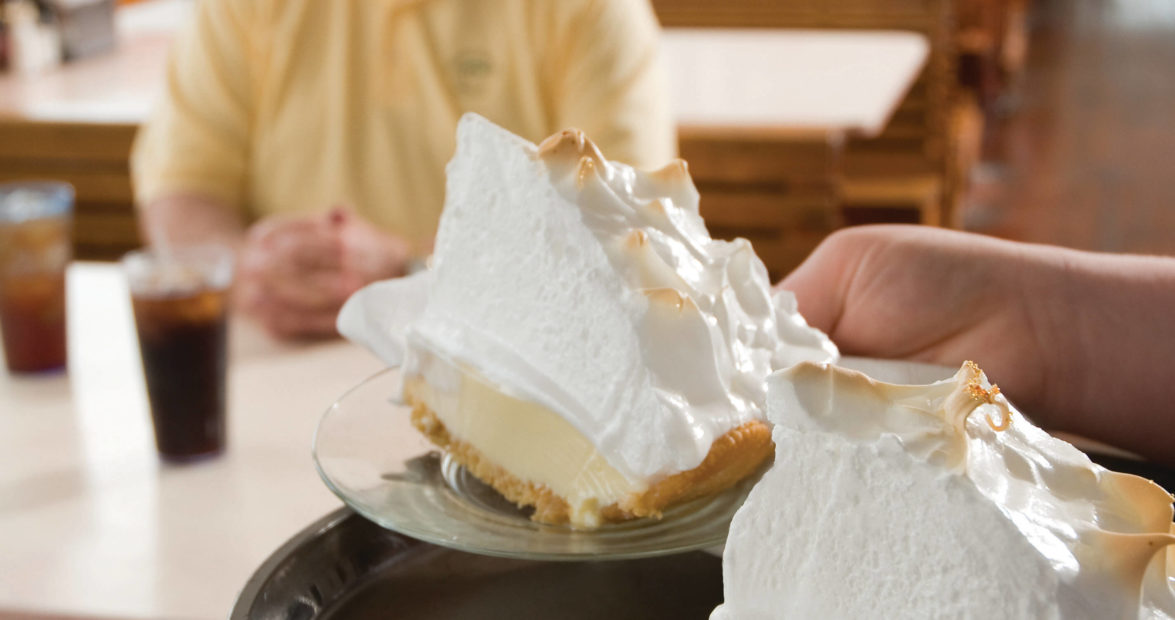 EDITOR’S NOTE: This story was originally published in May 2010.

It’s been around for 72 years. So, yes, things have changed. At one point, it lured people with a sign promising the comfort of “air conditioning,” something other places couldn’t offer at the time. Various owners have tweaked it, redecorated it, and reinvented it. It has touched the lives of locals, visitors, and even a president. It even burned down.

Through it all, Capt. Bill’s Waterfront Restaurant in Morehead City has always been the place with the pie.

With its tart, thick, creamy filling under a fluffy white topping — and an unusual Ritz cracker crust’s light salt balancing all that chilled sweetness — the Down East Lemon Pie is a Carteret County classic.

Sue Willis would know. She first worked at the restaurant in 1966. She left for more than 25 years, before returning to the Capt. Bill’s payroll in 1992. She’s now the manager.

“And,” Willis proclaims of the pie, “it hasn’t changed.”

The combination of pie and atmosphere make Capt. Bill’s a legendary location in the region.

“I bet there’s not anybody in Carteret County who doesn’t know about Captain Bill’s,” longtime regular William Taylor of nearby Brandywine Bay says, “whether they’re natives or not.”

“You find them all over Down East, from Harkers Island to Cedar Island,” Goodwin says of the pies. “Everybody still makes them.”

A pearl of a place

By the 1950s, Capt. Bill’s was a hot spot. Ballou added a massive dining room that still extends far out over Bogue Sound’s Morehead City Channel. The pine-plank floor, slat-wood benches, and crank windows give diners the sense of being on a ferryboat ride.

Actor and folk singer Burl Ives visited when he sailed North Carolina’s coast, and world heavyweight championship boxer Rocky Marciano signed autographs at Capt. Bill’s. In 1955, The Dispatch newspaper in Lexington published a photograph depicting 18 pearls a diner found in a dozen oysters on the half-shell at what the caption described as “Captain Bill’s famous waterfront restaurant.”

When Ballou died in 1960, his daughter, Patsy Ballou Wade, and her husband, Thomas Wade, took the helm. The restaurant continued attracting locals, tourists, and celebrities, but tragedy struck in 1969, when the Wades’ boat exploded during a fishing trip. The couple died, and so did family ties to the famed restaurant.

Over the course of about a dozen years, the restaurant passed through a series of proprietors’ and investors’ hands, but the spirit of the place, like its lemon pie, endured.

Current owners John and Diane Poag keep the history alive by showing old black-and-whites depicting Capt. Bill’s scenes. In one, Ballou is surrounded by young men who would become civic, business, and government leaders. Another shows a formally dressed dining-room crowd listening to Luther Hodges, North Carolina’s governor in the mid-1950s and the U.S. Secretary of Commerce under John F. Kennedy.

Good enough for the president

The Poags and history books note that Capt. Bill’s was the Morehead waterfront’s first air-conditioned restaurant. Additionally, it was the first to employ male waiters and blacks in the dining room. Countless Carteret County teens have found their first “real” jobs at Capt. Bill’s — waiting tables, prepping food, or busing tables.

“Every time I walk by, I can hear the clank of silverware and the glasses, and I can see the crowds and all the people I worked with,” Morehead City’s D.J. Femia Leeuwenburg says of her waitressing days. “I’m 16 years old again. I hear and feel the summer of 1972 every time I walk in that building.”

John Poag recalls a kitchen employee who joined the military and ultimately landed in President Ronald Reagan’s White House mess kitchen, where he baked the commander-in-chief a Capt. Bill’s Down East Lemon Pie. Otherwise, the secret formula has not been revealed.

The Poags inherited the recipe when they purchased Capt. Bill’s in 1982. John, who was born in Mississippi, was attending Duke University Law School in Diane’s native Durham when the couple met. They were working at the YMCA. John’s work took the newlyweds to Texas, where Diane pined for home. Through a friend who had purchased Capt. Bill’s, Diane’s father became a silent partner in the restaurant. When the owner/manager announced plans to sell the place, Diane’s father suggested the Poags buy it.

Mounted saltwater game fish that Ballou marketed for a taxidermy company remain on the walls, along with an old blue-tuna fishing rod and reel once cast by Ernest Hemingway. Ballou acquired the tackle from its famous designer, Elwin Lloyd Knowles, who was Ballou’s fishing buddy. The rod is one of three originals Knowles crafted in the 1930s.

Jumbo shrimp and some fish on the menu still come from local waters. The Poags added catering, a formal banquet room, and many of their own family recipes, including Diane’s mother’s luscious crab dip. Still, about a third of the menu’s offerings are made up of Capt. Bill’s originals, including heady, homemade conch stew and hush puppies that rival the pie’s popularity. For years, the recipe was posted on the menu.

“We use real eggs, real milk, real everything to make it,” John says. “It doesn’t come in a sack that says ‘hush puppy mix, add water.’ ”

Outside their ownership duties, the Poags are happy to walk fussy babies and educate children about an otter family that visits the deck each summer. They direct kids to “John’s toy,” a bells-and-whistles gumball machine that periodically sends elephant roars through the restaurant. They stock shiny seashells, crayons and coloring pictures, homemade fudge, saltwater taffy, and hand-dipped ice cream that please young and old. Today, adults who first visited Capt. Bill’s as children are bringing their kids to the restaurant.

Not even a June 2000 fire that nearly destroyed Capt. Bill’s could end the restaurant’s run. An outpouring of customers’ heartfelt memories and friends and employees who were willing to help motivated the Poags to start again.

“I’ll never forget one night,” Diane begins, as she and John fight tears. Capt. Bill’s power was out, and John, with only a flashlight’s beam, chipped away at varnish peeling off the waterlogged and bowed pine floor that the sprinkler system flooded during the fire. “He was sitting back there like he had lost his best friend.”

Soon, Diane, along with a Capt. Bill’s employee and a sales representative in her dress, hose, and high heels, joined the tedious effort.

“We sat on that floor for three hours with spatulas, talking. And you can go back now and you can see the light, huge spot where we were getting all that popped varnish off that floor,” Diane says.

The many years of joys and heartaches, owners and patrons, shaped Capt. Bill’s charming story. “It’s just one of those places that once you start going, you keep going,” says William Taylor, the longtime customer. “Other restaurants come and go, but it just stays.”

Along with it stays the Down East Lemon Pie. Fans make the day trip from as far away as Raleigh and Myrtle Beach just for pie, and the Poags pack pies for customers to take home to distant states. Attorneys have billed clients a pie or two. Sometimes, John trades pie for seafood.

Taylor, of course, has a slice during his regular visits. So does his wife.

“There’s no sharing that one,” Carol Taylor says.