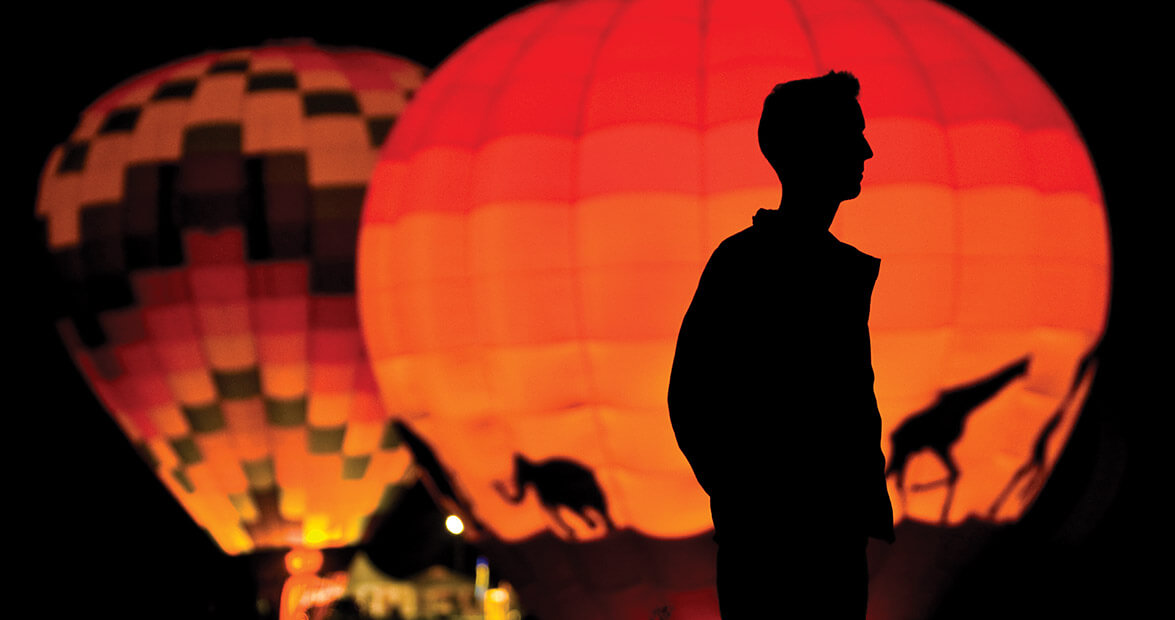 Editor’s note: This story first appeared in the October 2014 issue of Our State.

I trust Marsha Treacy. I do. She’s the pilot, and before we ever left the ground, she spent a great deal of time using terms like “wind speed” and “right-of-way” and “N-number,” the last being a reference to the aviation registration numbers on the sides of hot-air balloons, which are not unlike the string of alphanumerics on the sails of sailboats. Now, in the air, she keeps saying “aircraft” instead of “balloon.” Everything feels very official, like whichever of the laws of thermodynamics that are keeping us aloft might continue to do so. But there are two Mikes on the radio — there’s a radio! very official! — and one Mike is just called “Mike,” and the other is called “Evil Mike,” and this seems like a hilarious joke, even to me, save for the small matter of being in the actual sky and having a person, obviously in some sort of charge, being called Evil Mike.

Or Mark. I can’t quite read my notes. My hand might have been shaking. Those “Mikes” might be “Marks.”

At one point mid-flight, Marsha Treacy says to me, “Staying in the basket: very important.”

The fundamental technology of hot-air ballooning is, give or take, unchanged since its inception. There is a gigantic flying bag filled with — surprise — hot air, beneath which is strung a basket. In the basket rides a person, or people. Heat makes the whole thing rise. In the 18th century, balloonists used fire. Real fire. Straw-and-wool fire. Now, they use high-tech propane burners, which, I feel I should say, also make real fire. It is both desperately elegant and utterly insane all at once. This is why people pull over to the side of the road to take pictures of balloons. This is why we have balloon festivals. And sure — we have festivals for airplanes and helicopters and model rockets, too, but there is, isn’t there, something about a balloon? Something more immediate? More beautiful? A balloon captures the imagination because it seems so straightforward, so doable. I could make that, you think. I could have thought of that. 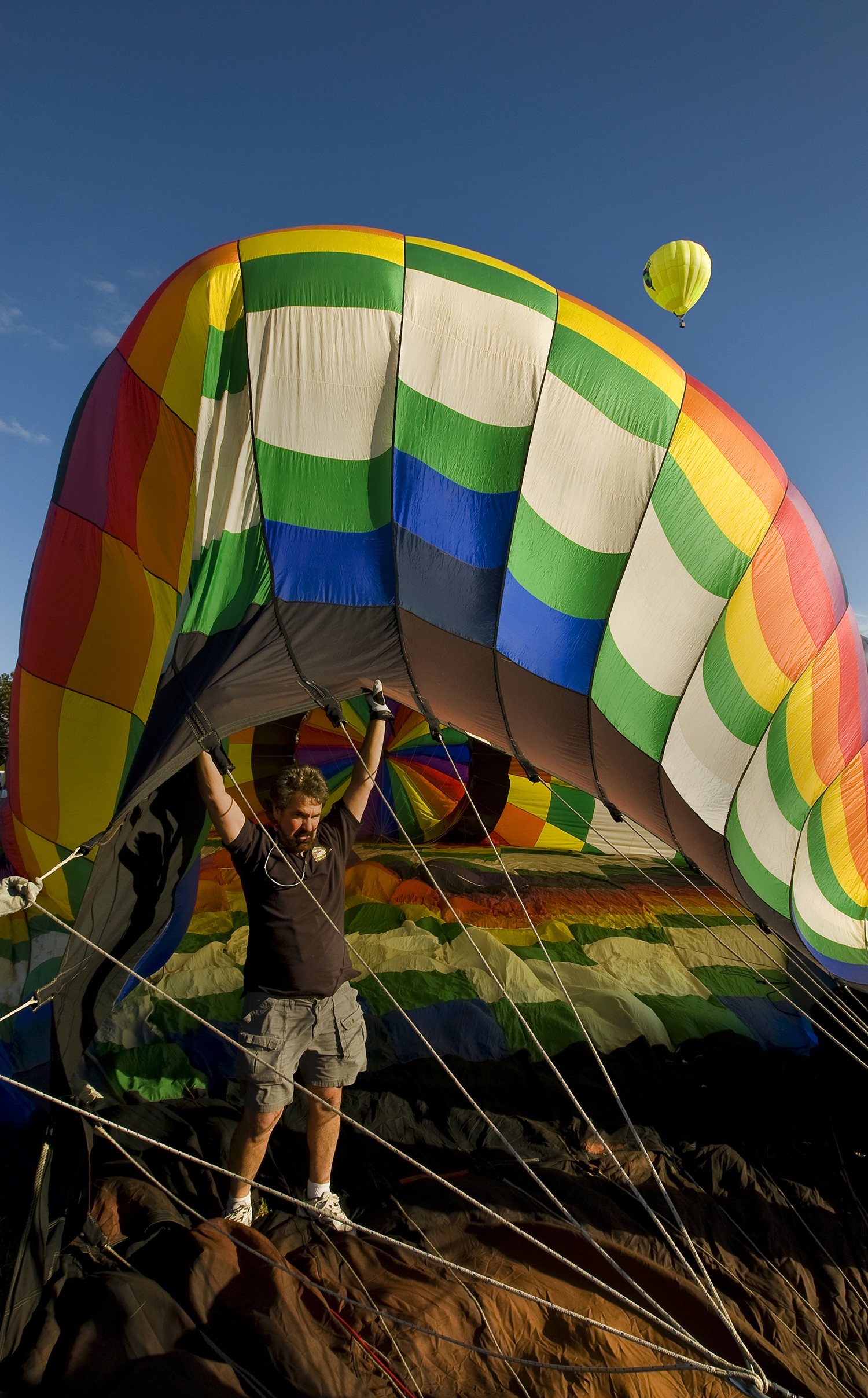 You can book a flight at the Carolina BalloonFest during one of two “mass ascensions,” when as many as 50 hot-air balloons inflate and leave the ground simultaneously. photograph by Patrick Schneider

Which is apparently what so arrested the Montgolfier brothers, Joseph and Étienne — two of 16 (!) children of a French paper tycoon — who, in 1782, became enamored with the way scraps twirled above the paper factory cleaning fires. They thought, “Hey, could we fly comme ça?” Or somesuch thing. Imagine these moments both fancier and more reckless and you’ll have it: The Brothers M building a small paper balloon and filling it with smoke; the Brothers M building a much larger paper and fabric balloon, filling it with smoke, and sending farm animals up a couple thousand feet to see if they’d live (hey, NASA chimps); the Brothers M launching fantastically ornate, smoke-filled paper and fabric balloons, consenting humans aboard, above Paris — but let’s quit this. Balloons worked. Almost immediately. Successes looked like what you might imagine. Failures, too. Fire. Paper. Heights. Slip the surly bonds of earth, et cetera. The balloon was the first way man, or woman, ever flew.

“Here,” Treacy says, handing me a carabiner. “Let’s get that camera strapped in.” I myself am not at all strapped in, not in any way. That is not how it goes. Now seems as good a spot as any to note that the basket is, in fact, a basket. As in: The thing is made of wicker. It creaks. It is a basket in the same way that baskets from the chain store If It’s Baskets are baskets. It is waist-high, and the whole staying-in-the-basket proposition is, for someone not terribly fond of heights, something that stays pretty much front-and-center for the whole flight.

“It was one of the first things that stopped me in my tracks,” Treacy tells me. At 2,100 feet over Statesville, I’ve asked her how she ever got into this in the first place, like it’s the occult. The answer is disarmingly straightforward: She flew for the first time however many years ago, bought the balloon from the pilot who’d flown her, got her license, and rode off into the sunset.

Or drifted. That’s one thing that’s seemed so strange, and so lovely, from the outset: You’re not totally sure where you’re headed, and you’re not totally sure where you’re going to land. It’s like adolescent love. There’s no steering. You can find air currents going one direction or another at various altitudes, and there’s a good bit of radio chatter about this with Evil Mike/Mark, but mainly you either fire the burner awhile and go up, toward the clouds, or you vent the top and slide back down. We ride at times within inches of the ground. We ride just below a kind of scudding fog bank at 2,800ish feet. There are other balloons with us. Sometimes we can see them, and sometimes we can’t. Lower balloons have the right-of-way over higher ones, Treacy tells me. I look up into the canopy, a circus big top of blue and white and red. You have no real idea what’s above you, other than balloon. At some point, I stop white-knuckling the edges of the basket. I take some pictures. But mainly I watch. The tops of trees at this speed, this pace: It’s like seeing an entirely different living thing. I’ve never been apart from the earth like this. It’s not at all the same as being in a plane.

Treacy, for a time, flew Oldsmobile and Cadillac balloons for GM, a piece of information that delights me on every level: Of course there were Oldsmobile and Cadillac balloons! She’s from Michigan — GM, y’all — but moved to North Carolina in part because of the Statesville Balloon Festival, which takes place each October and is one of the oldest in the country. Why Statesville? It’s the weather. North Carolina gets a lot of good days. What you need to fly: clearish skies and a wind at less than eight miles per hour. No thunderstorms within a prudent number of miles. Flights take place mainly at sunrise and sunset, the two calmest times of day.

We take off at sunrise from someone’s front lawn. It’s a big front lawn, but it’s a front lawn. Somebody lets fly a helium balloon, a plain old 99-cent party balloon, to get an idea about initial wind currents. The big balloon, the real balloon, comes out of its bag, gets laid out on the ground, gets cold air blown into it via what amounts to a box fan with a moped motor on it. You goose the burner. The balloon goes vertical, you climb in the basket, somebody unties a rope the diameter of a child’s forearm from the trailer hitch of the chase vehicle, and you’re gone. It’s all pretty fast. It makes a surprising amount of sense. Still, those first few feet: There is, early on, a point where you realize, OK, we’re too high for me to jump, I’m in it, this is it, we’re flying.

I take a picture of my feet back on the ground, and text that to my wife. I understand that the car ride on the interstate back home is, by the numbers, much more dangerous than what I’ve just done, but still. Landing is much the same as takeoff: At the start, you quit not flying, and at the end, you quit flying. We drop into a clearing that feels much too small, but Treacy is a pro — literally, of course. Though she warns me to brace and crouch, we only bounce a couple of feet, the chasers from the chase vehicle catch us, hang on to the ropes, and it’s over.

A four-foot-wide metal S-hook called a “squeezie” is used to deflate the balloon. One of the chasers says to me, about having not been able to see us for a time, “Nothing like losing a nine-story building in the sky.” Another balloon has landed nearby, and those folks meet up with us. We toast our good fortune — also literally, a tradition dating back to the time of the Brothers
M, when balloonists learned to be ready to appease surprised, pitchfork-wielding farmers, in whose fields they might land. The radio crackles. Evil Mark/Mike. He wants to know where we are. “Drinking Champagne in a business park,” says the other pilot.

I never want to do it again. I want to go again tomorrow. People I’ve told about this keep saying “bucket list,” but forgive me: That’s not it at all. This is a thing that’s impossibly possible. This is the cutting edge of 1783, available in the here and now. This is the simplest form of flight. Not New York to Los Angeles, not even Asheville to Wilmington. This is up and down. It’s terrifying and wonderful. “I like the challenge,” Treacy tells me, “even though the flight is calm. It’s kind of like hiking.” And she’s right: It’s a way of being away. And, somehow, a way of being in the world. It works precisely like you think it will — and you don’t know a thing about it until you try.