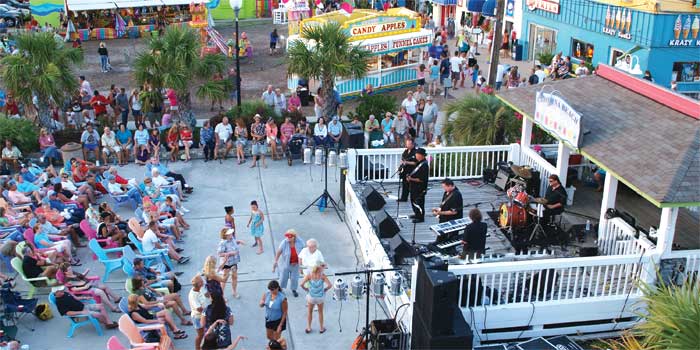 Editor’s note: This article originally ran in June 2013. Visit www.visitcarolinabeachnc.com for up-to-date information about what to do at Carolina Beach.

Ask a local in Carolina Beach about the boardwalk, and you might hear that it’s bright and colorful and fun. And it is. Between pastel-colored buildings, flashing carnival rides, and local food, it’s an inviting destination for families.

But you also might hear how it hasn’t always been this way. The story goes that in the ’80s the boardwalk began to decline. Shops closed up. Carnival rides stopped. Tourists abandoned it.

While a few activities persisted, the boardwalk became a ghost of its former self. In 2008, the end seemed near. But then some concerned citizens organized and started painting and planting and making improvements. They called themselves the Boardwalk Makeover Group.

They logged 8,000 hours of volunteer work, and it shows. The carnival rides are back. Boardwalk dining spots, such as Britt’s Donut Shop, are more popular than ever.

This season — the fifth since revitalization efforts began — the boardwalk opens on May 16th to welcome summer vacationers.

It’s an affordable attraction, too.

One of the best deals is on Thursday nights, when — weather permitting — bands play into the night and fireworks explode over the Atlantic Ocean. Both these activities are free. The live music starts at 6:30 p.m. at the Boardwalk Gazebo, followed by the fireworks at 9 p.m.

In June, bands playing at the boardwalk include beach music, classic rock, and indie rock acts.

If that’s not for you, consider the 25 carnival rides at the amusement park. Open every evening in the summer months, it makes for a great night out after a day on the beach. Remember that family night is on Tuesdays, when, for $20, a kid can ride as much as she wants.

If none of this sounds right for you, head over to Britt’s Donut Shop, where, for 85 cents, you can get a no-frills glazed doughnut. Then just take a walk and listen: The music and the laughter say this boardwalk has recaptured its former magic.