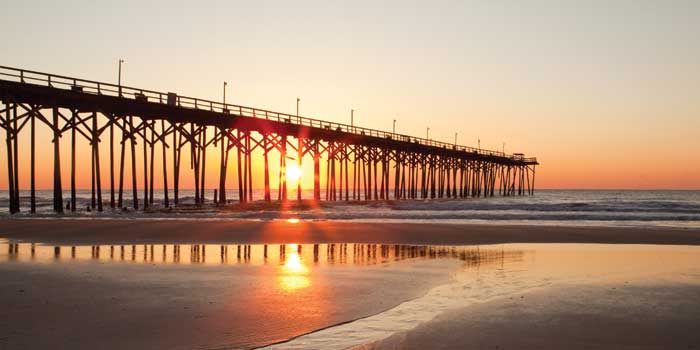 At 6:30 on a warm, cloudy evening last June, the doors opened at Le Cube, a small, first-floor, independent art gallery on rue Benzerte in Rabat, the capital of Morocco. More than a dozen pictures hung from the white walls. A skyline shot of Los Angeles, California. Narrow images of power lines in differing tints. A pair of yellow high heels sitting on a lonely road’s double yellow line. One picture was titled The Beach Across The Pond. In this picture, a khaki-colored beach meets a blue tide. Three sanderlings run away from the approaching foam. A woman, out of focus, walks toward the camera.

This picture, on this wall in Morocco on the other side of the world, wasn’t a picture of just any beach. It was a picture of Carolina Beach.

The story of how that picture ended up in an art gallery nearly 4,000 miles away from the North Carolina coast is a story of connectedness. Of curiosity and realization. It’s the story of an invisible line that runs through two faraway places. And it’s the story of two people having the same thought, nearly one year and thousands of miles apart: What lies on the other side of the ocean?

When I stand at the water’s edge with my toes in the surf, three miles out is as far as I can see. That’s not good enough. It’s never been good enough. When I was a kid, I dug holes, and somebody at some point told me that if I dug deep enough, I would eventually arrive in China. Most kids leave it at that. I didn’t. Where, exactly, would I come out? Near Beijing? Shanghai? Would I be upside down? And how deep would the hole need to be? I needed something more exact than just China. The questions tugged on my young mind as I kept moving dirt around with my dad’s shovel.

The last time I was in Carolina Beach, I checked. Digging a hole on the beach wouldn’t put me in China, but somewhere at the soggy bottom of the southern Indian Ocean. Then I looked out at the water. I had to know what was out there.

My wife’s parents own a home a block or two away from the ocean on the southern edge of town, right where it meets up with Kure Beach. Carolina Beach takes up the northern side of Pleasure Island, a stalactite that juts downward from Wilmington, with the Cape Fear River on one side and the Atlantic on the other. It is a mishmash of motels and oversized, three-story pastel-colored tin-roofed weekend palaces, which tower above the humble, screen-doored cottages and bungalows that the full-timers live in. Up on the north end are long, brown 1980s-era condominium complexes. They look out at the pier, where fishermen scale whatever curious flounder, sheepshead, and (occasionally) king mackerel are unfortunate enough to be hanging out near the pilings that day. Last August, Hurricane Irene took a bite out of the beach and made a long, gently sloping walk to the ocean into a short, steep one. The storm turned the wooden steps at the end of Alabama Avenue into a mangled heap of nails, planks, and sand. Most times, the beach is warm and inviting. Sometimes, nature changes your plans.

And so it was, on a blustery, rainy day that kept me inside, I decided to figure out what was on the other side of the ocean.

I got a rough idea by tracing a line across a map with my finger. A trip due east would put me somewhere on the coast of Africa. Then I got out the computer and brought up Google Earth. Pleasure Island, it turns out, sits directly on the 34th parallel. I kept going. I found my house on the map. I punched in my exact latitude. I ran the line across the ocean, across nearly 4,000 miles of brackish, churning water, to see where it would find land again. I expected something barren, rocky, or deserted. I expected a bleak African coastline.

What I got was Rabat, a fortress founded nearly nine centuries ago. Today, it’s a city of 620,000 people. The colonial architecture and crumbling city walls remain, but the rest of it looks exceedingly modern, with cars and embassies and rooftop TV antennas. I found the rocky crag along Avenue Moustapha Assayeh, where I’d come ashore. There’s a hospital nearby. There’s a school down the way. There’s a tramway station. There are pictures. I know what it looks like.

Then I wondered if anyone there had ever had the same thought. If anyone in Rabat had ever stood on the edge of the ocean and wondered what lay due west. It turns out, someone had. And that’s how I discovered Malika.

I found Malika Squalli simply enough: A Google search for “Rabat” and “Carolina Beach” brought up her blog and her photos.

She is 35. She was born in Rabat but lives in London, England. She calls herself a personal trainer, a holistic life coach, a photographer, and an artist. She has short, brown hair and a slender build. Last summer, she was sitting in Santa Monica, California, trying to figure out why she felt so inspired to take pictures there. And then, she had her realization. Santa Monica lies just north of the 34th parallel. Just like her hometown.

Soon, she took off on a cross-country trip along that line: 34 degrees, 2 minutes north latitude. She drove east from California; across the western desert; and into Alabama, one day before devastating tornadoes ripped through Tuscaloosa and Birmingham. When she saw a picture, she stopped and took it. And on April 28, 2011, she made it to the place where her line met the Atlantic Ocean: Carolina Beach.

When she arrived, the sun was out after days of rain. She pointed her camera due east toward her hometown and took a picture. She felt peaceful. Carolina Beach was a quintessential beach town, she thought. The architecture is drastically different than in Rabat. She was taken by the way the houses were “high up on their feet.” She noticed the North Carolina beach is cleaner than Morocco’s.

Some people told her she was crazy to spend all of that time following a line. Some loved her enthusiasm. Many looked at her pictures and found themselves connected to faraway places they’d never visited by tracing a line on a map. The distance mattered. “It is really more than the specific points,” Malika told me. “The space between is equally important.”

She remembers the summers from her childhood. Her house was on the shore in Morocco. Her room overlooked the Atlantic. She walked on the beach every morning at 6 — just to have it to herself.

“When I felt a little blue,” she said, “I would sit by the sea and stare at the ocean.” She would listen to it. She would look to the west. She would wonder.

The world is so small now. You can see faraway places with just a click. You can instantly know volumes about a place that had once only been a dot on a map. The shore used to be the end. Now, it’s the beginning.

North Carolina feels like a unique place. Mountains rise up to the west. The ocean laps up on its eastern edge. The Piedmont is covered in kudzu, and red clay comes up when you kick the ground. What could a place like this possibly have in common with a place that’s nearly 4,000 miles away?

Malika told me something she first noticed in Santa Monica. Then, she saw it in Carolina Beach. Then, Rabat. Everywhere she went along the 34th parallel, there was something about the light. It hit buildings at the same angle. It reflected off the water with the same shimmer. The sunrises and sunsets had the same tint. The light was always the same.

There was one more thing: The days when Malika was in Carolina Beach, April 28, 2011 through May 1, 2011, I was there, too. I wasn’t in her picture. But I was there. Feet in the water. Eyes toward the horizon. I might have seen her, walking on the sand, camera in hand. We may have passed each other on the beach. I’ll never know for sure.

Malika will return to the United States this fall. Some of her pictures will be on display at a gallery in Atlanta, Georgia, in October. She just returned from Australia and New Zealand. She took pictures on the 34th parallel in the Southern Hemisphere. She can’t get that number out of her head.

She wants to drive up to Carolina Beach to meet the people she missed the last time. I hope I’m here when she returns. I want to see if we have more in common than an invisible line and a curiosity about the parts of the world we can’t see from the shore.

If she returns in the summer, the beach will smell like suntan lotion. It will take an hour to make it from the back of the line on the boardwalk to the cash register at Britt’s Donuts. People will surf here, just like they’ve been doing every summer since the 1940s. And the kids will be out. They’ll be playing in the waves. They’ll build sand castles. They’ll dig holes, just like I used to. They’ll look out to the east toward Rabat, 4,000 miles away. And maybe way out there, someone will be staring back at them, listening to the ocean and wondering.