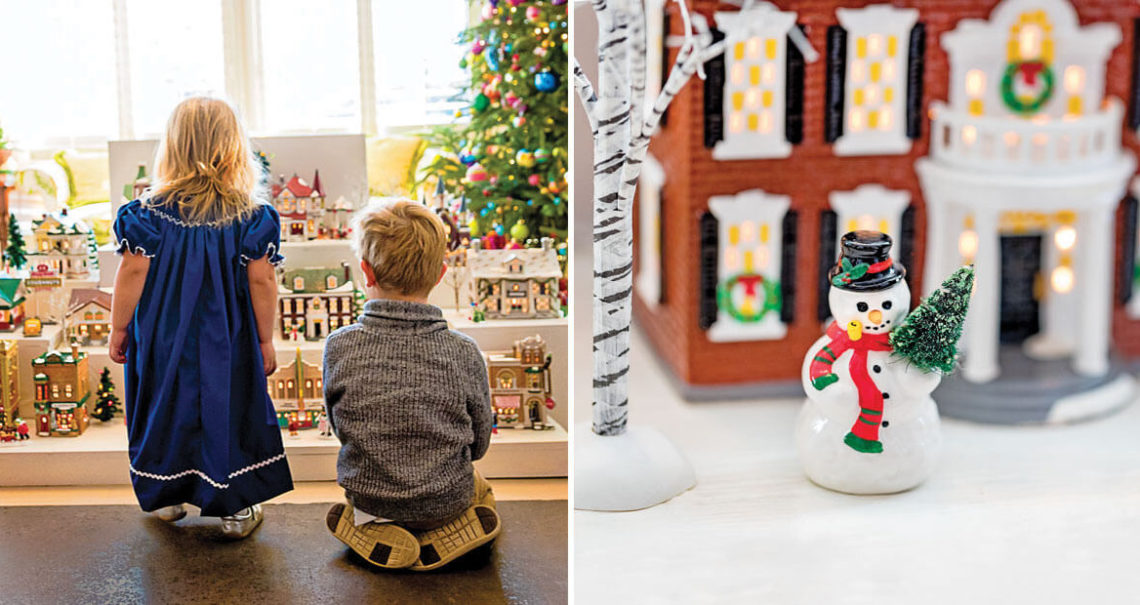 t his preschool graduation last May, my son, Charlie, stood up on the stage and announced that when he grows up, he wants to be an architect.

“Why?” his teacher asked.
“Because I want to build villages,” he said.

To you, this is a sweet kiddo moment. My son, you could be forgiven for thinking, was destined for a future full of blueprints and flying buttresses. He would be César Pelli. Or maybe Frank Lloyd Wright. His life would be measured in square feet.

What my son meant to say was that he wanted to grow up to be a village maker. He’d been saying so for months. A village maker, to him, was not an architect, although in an effort to make things simpler for a preschool audience that lacked context, we encouraged him to say architect. But Charlie didn’t want to build housing developments. He wanted to build villages. Specifically, ceramic Christmas villages made by a company called Department 56.

Obsession is too light a word here. He demanded catalogs. He memorized their offerings and price points. He dreamed of little village buildings that he might receive. At bedtime, he asked me to name my favorite building every night for a month. My wife, Kelsey, and her mother took Charlie on several trips to the Salem Creek specialty store in Winston-Salem because they sell villages. Charlie talked shop with the salespeople, and it quickly became obvious that our 4-year-old boy had a deeper working knowledge of the Department 56 universe than they did. Charlie then announced that, someday, he would work at Salem Creek, and nobody doubted his qualifications. Someday? we all thought. He could start right away. 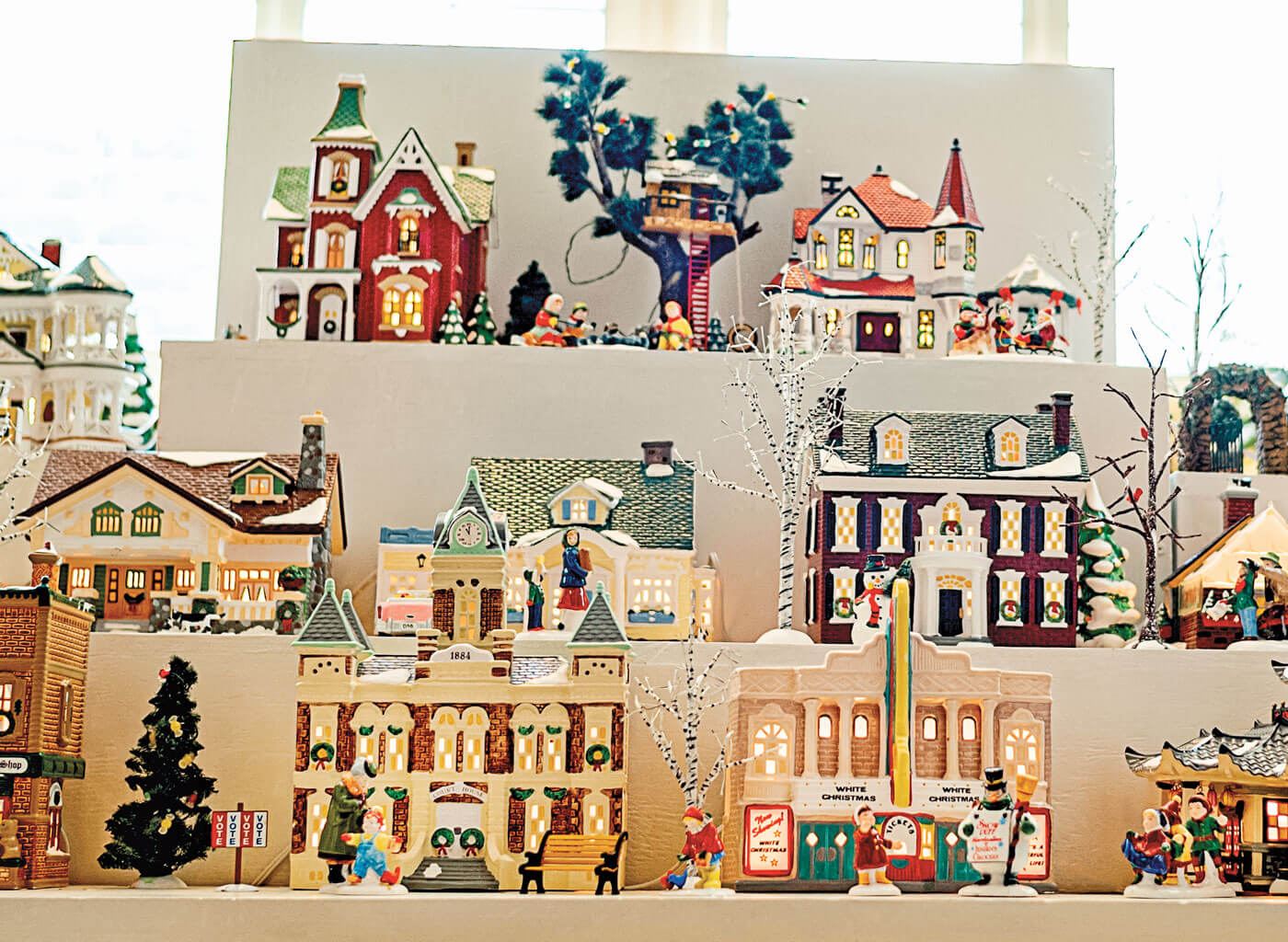 Each piece of First Lady Cooper’s Christmas village has a connection to a family moment, or to North Carolina. photograph by Charles Harris

Charlie is 5 now, but the villages he’s fanatical about have been around since before his mom and I were born. Department 56 was founded in 1976 by a few friends who started building small, snow-covered ceramic houses and selling them from the back of a retail florist in Minnesota. The company would go on to become a mainstay in the holiday collectibles industry. Long ago, my wife’s side of the family started, and steadily added to, their collection. When Kelsey moved out, she got a share of the family village to display, and when Charlie was still a baby, the little pieces were placed atop end tables on a fluffy bed of fake snow. He has never known a December without them.

The villages have made Charlie fall in love with Christmas in a different way from most kids.

The small structures are lit from the inside with warm, incandescent lights, and they glow in the early winter darkness of our home. They’re tiny totems of a Thomas Kinkade-style holiday universe, where the snow drapes perfectly on perfectly pitched roofs, where a downtown still has a pet shop, where a Ford dealership displays a car spinning in the showroom, where a house with bay windows plays a twinkling version of “I Saw Mommy Kissing Santa Claus” from an embedded music box.

The villages have made Charlie fall in love with Christmas in a different way from most kids. Yes, he enjoys thinking about Santa, looking at a tiny baby Jesus in the Nativity, opening presents, and listening to “Jingle Bells.” But for Charlie, the aesthetic of the season is just as important as the gifts and songs and stories. When the village buildings go back into their Styrofoam containers and into the attic after New Year’s Day, they never quite leave Charlie’s mind. All year long, he reminds us where each piece goes and in what order it stands: The high school is next to the church, which is next to 1224 Kissing Claus Lane. The reporter is always standing in front of the TV station, earmuffs on. The lights are always low, the village buildings always glowing. It is his fantasy world, and he chooses to live in it, year-round.

A trip to Eden Prairie, Minnesota, home of Department 56, seemed like a bit too much, so last year, we tried the next best thing. It turns out that the first lady of North Carolina, Kristin Cooper, has a small Christmas village collection herself. And she puts the pieces on display at the North Carolina Executive Mansion every December. So on a Friday morning, we loaded up Charlie and his little sister, Holly, and drove to Raleigh. I arranged for our family to have a private viewing of the display, and to meet the first lady. When we arrived, we walked back to a small sunroom, and there, on the floor, on a set of little wooden display risers, were the village buildings. Charlie walked over, got down on all fours, and looked at them. His sister did the same. 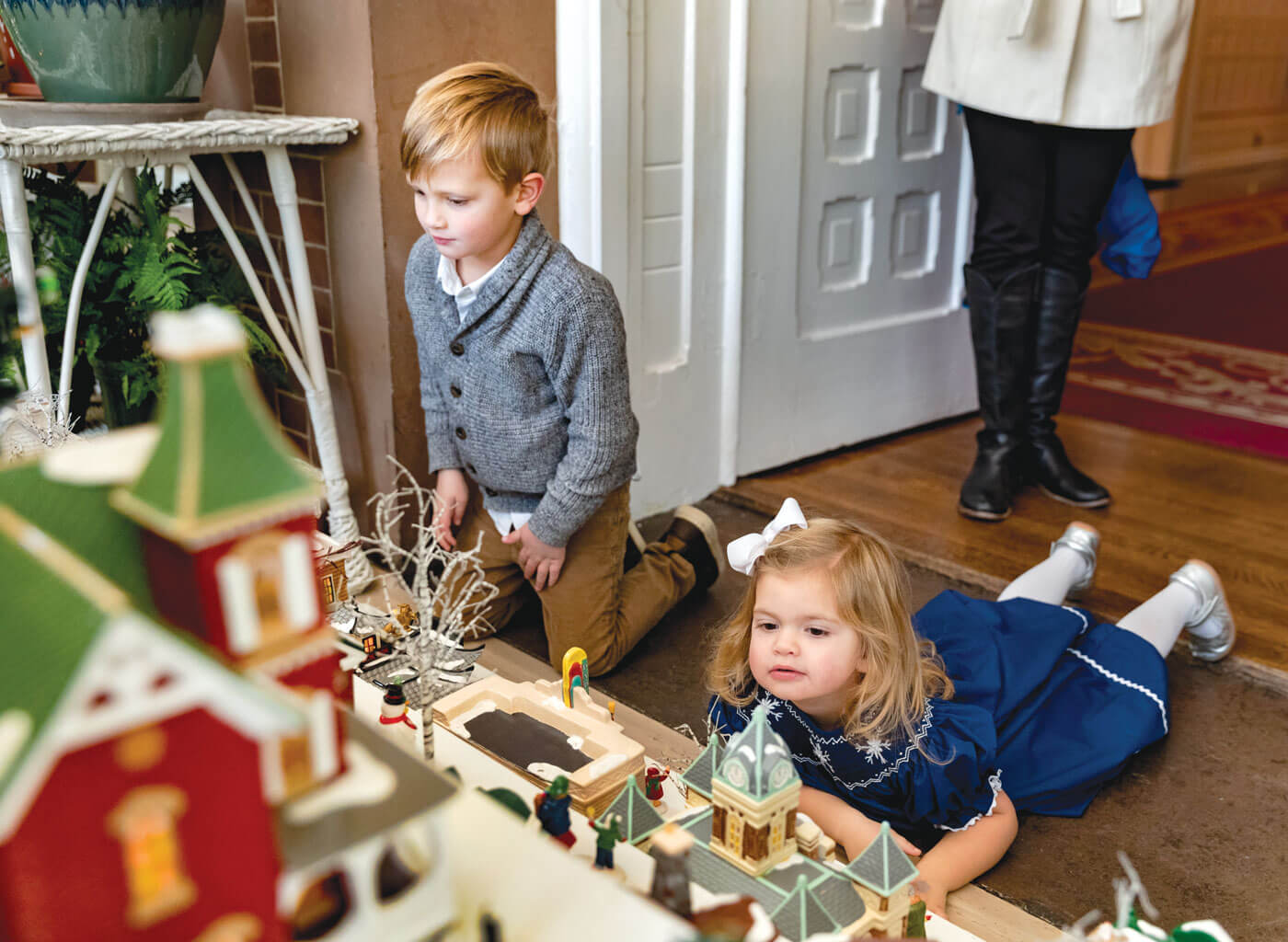 The first lady’s aide watched us watching. Wondering, I’m sure, what all of this was about. I had, after all, pitched this to her as a story about what the collection means to the first lady. But it turns out that Cooper was running late for another official appointment that day, and she never made it down to say hello. Not that it would have mattered to Charlie. He was locked into the village. Studying the little pieces. Comparing them.

“Think of some questions to ask,” I told Charlie.

A few moments lapsed. “I have no questions,” he said.

The aide explained the significance of a few of the pieces. One of the Coopers’ daughters likes her local doughnut shop, so there’s a Krispy Kreme building. Their youngest daughter likes Chinese food. Hence, a ceramic Chinese restaurant. Another building looked like the house that the Coopers lived in before moving to the Executive Mansion. The first lady has been collecting them since the 1980s. “She used to have signs that said ‘Roy for President,’” the aide said. I began to scribble a little harder in my notebook. She saw this. “They were sort of a family joke,” she added.

Charlie still had no questions.

A choir started warming up in another room. The annual Christmas open house was about to begin, and a line was forming at the front door. Charlie sensed that his time was nigh. “I’m still looking,” he said, answering a question that nobody had asked.

I tried to start the transition away from the village. “What do you think about that Christmas tree?” I asked him.

“What Christmas tree?” he asked, missing the towering, twinkling tree directly in front of him. “Oh! That one!”

The doors opened, a velvet rope went up, and the mansion flooded with people. We pulled Charlie by the hand from room to room to see the decorations and the choir and the portraits. Suddenly, he was gone, lost in a sea of gawkers. I glanced over at the entrance to the sunroom, and there, in the front, was Charlie, staring at the villages. We let him stay until we left.

“Bye, Charlie,” a docent said. He’d told her all about his own collection.

We drove home, where we immediately turned on our Christmas village.

It’s been a year since our trip, and most of Charlie’s obsessions have changed. First, he was into cars. Then, he went through a Toy Story phase. (Thanks, Walt Disney World.) Then, as soon as we bought him a carload of Buzz Lightyear paraphernalia for his Buzz Lightyear-themed birthday party in July, he pivoted. On that very day, he declared his undying love for Ghostbusters. (He has several toys based on the movie, which he’s never seen.)

We need things that cannot change. For Charlie, so far, that constant has been Christmas villages.

As the person who buys the toys, I sometimes wish he wouldn’t change his tastes so much. But as a dad, I get it. One of the scariest things for me is going on an overnight trip and then returning home to discover that my boy has, somehow, grown in just 24 hours. He knows a few more words. He’s gotten a little better at soccer. His voice is a little bit less childlike and a little more grown-up. We all know that life is not a static, frozen timeline, but rather a series of changes — some big, some small — happening every day. None of us is the same person we were a day ago, or a month ago, or a year ago. And so, as we all continue sliding down the slippery slope away from who we were toward who we’ll be, sometimes we need things that cannot change.

For Charlie, so far, that constant has been Christmas villages. His wide-eyed wonder over them isn’t what it once was, but he still nags at me, holding me to whatever specific day that I mentioned, offhand, will be Village Setup Day. By the time you read this, I’ll have already gotten the pieces out of the attic and set them up under the watchful eye of my 5-year-old foreman. Then, he’ll stare. I don’t know what career Charlie will choose, but someday, this village will belong to him, and he’ll set it up in his own house as the architect of Christmastime that he always wanted to be.