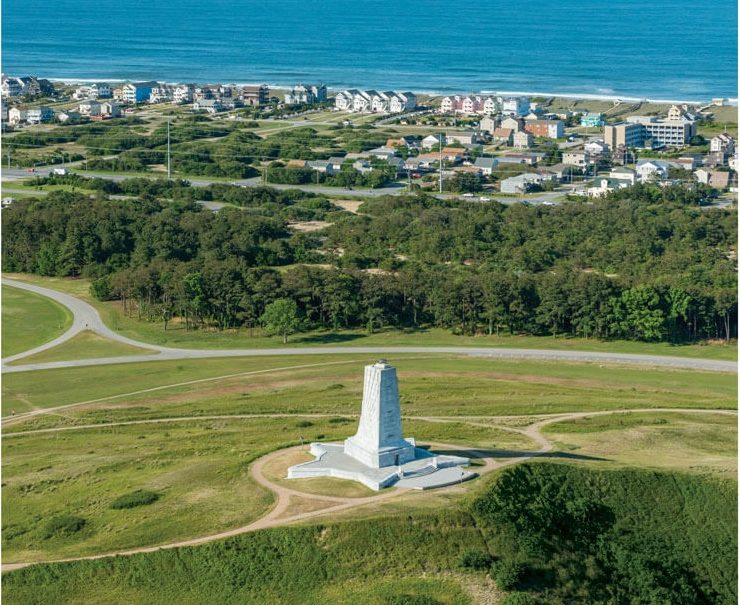 The Man Will Never Fly Memorial Society was created in 1959 because, in the words of its founders, they were bored. There wasn’t much to do on the Outer Banks the night before the annual celebration of the Wright brothers’ first flight on December 17, and they wanted to have a party — something to balance out the formality of the First Flight Society, which organizes the anniversary event. The newly formed group came up with a motto: “Birds Fly, Men Drink.” And that’s exactly what they did.

The society’s platform is tongue-in-cheek: A gullible populace, they say — one raised on fabulous stories involving Cupid, Pegasus, flying carpets, and baby-delivering storks — would of course buy into this whole aviation deal. Members allegedly believe that hot-air balloons are real, but powered flight is a big fat fake. Every time you step inside a jetliner at Charlotte Douglas or Raleigh-Durham International, you’re really just entering some elaborate Truman Show-style charade, where grips simulate air travel by making loud, engine-y noises and running past your airplane window holding fake scenery. “We remain dedicated to the principle that two Wrights made a wrong at Kitty Hawk,” the society’s website says.

In fact, many members who gather in Kitty Hawk each year are pilots, or even astronauts. They stage sarcastic stunts and watch demonstrations of alternative modes of transportation, like pogo sticks. They’ve given anti-aviation awards to Chuck Yeager and Snoopy. And they gush over a quote from a newspaper editor who heard about that original 12-second flight back in 1903: “Man will never fly,” the quote goes, “and if he does, he will never come from Dayton.” Sure, our “First in Flight” license plates may be wrong, but take solace in the fact that Ohio’s “Birthplace of Aviation” tags are even wronger.