Our State Animals: Check out the full series.

Dogs seem to be everywhere on this pleasant Maggie Valley morning: Lined up along the banks of Jonathans Creek behind the Meadowlark Motel. Baying from the beds of huge pickup trucks parked in the vintage roadside inn’s lot. Sitting dutifully next to their owners around picnic tables scattered about the large grassy area out back.

Every summer, just as sure as May turns to June, the organizers of PlottFest in this gateway to the Great Smoky Mountains bring local hunters together with other enthusiasts of North Carolina’s official state dog for a celebration of all things Plott. You have your black Plotts, your brown Plotts, your buckskin Plotts, and — perhaps most remarkable of them all — your brindle Plotts with piercing hazel eyes. You have your best-in-show Plotts, your baying-and-treeing Plotts, and your babysitting-the-kids-while-the-adults-talk-bear-hunting Plotts. 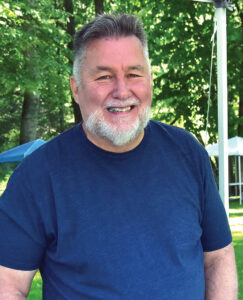 Bob Plott is part of a six-generation family tradition. photograph by Wayne Ebinger

And you have Bob Plott, the 66-year-old keeper of the breed’s history. His great-great-great-grandfather Johannes Plott emigrated from Germany in 1750, bringing along five of his prized mixed scent hounds bred for hunting large game in the Black Forest. It is believed that after landing in Philadelphia, the teenage Johannes made his way south to a Swiss-German colony in New Bern. From there, he began his move westward across North Carolina, eventually heading up to what’s now known as Warren County, then down to Cabarrus and Lincoln, where he started a family and kept refining his breed of fearless, intelligent dogs. His son Henry continued west, ultimately settling with his family in Haywood County, where the dogs — now known as Plott hounds — have been used for more than two centuries to hunt bear and wild boar.

To Bob, the story of his ancestors and their dogs is nothing short of epic. “It’s classic Americana,” he says, “with roots that run deep throughout this state on so many levels.” Indeed, the tale of a family trekking west with their namesake hunting dogs in tow checks all the boxes for great cinema: “There’s buffalo along the way, there’s panthers, there’s Indians and outlaws — it was rough,” Bob says as he thumbs through a family photo album of images, many of them dating back to the 19th century. “But they had these dogs that were hunters, they were herders, they were protectors, they were friends. They defended households during the French and Indian War, during the Revolutionary War, the Civil War.” He pauses and shakes his head. “It doesn’t get any more American than that.”

Hang around Bob long enough and names like Uncle Fed Messer, Wid Medford, and Turkey George Palmer will roll off his tongue like bourbon barbecue sauce on fresh bear meat. All of those rascally gentlemen were North Carolina bear hunters who pursued their quarry using the uncanny tracking abilities of Plott hounds.

When he was about 10 years old, Bob, who was born and raised in Statesville, began spending summers with his relatives in Haywood County — guys like his Uncle Cecil, who ran the Bryson City railroad depot and took Bob on hunting trips, and his cousin Von, one of the most famous Plott hound breeders of the 20th century. They’d sit on the front porch, pick guitars, sing, and tell stories into the wee hours about wild adventures that may or may not have actually happened.

“Sunday afternoons were all about, ‘Let’s go to Von Plott’s house over here on Plott Creek,’” Bob says. “And for me, that was like getting to sit down with a bunch of NFL players. These guys were celebrities. They were rock stars. I’d be thinking, ‘Man, that’s the guy who first got the dogs registered back in 1946! Now he’s old, he’s crusty, he’s cussing, and he’s telling these great stories.’”

These dogs were hunters, herders, and protectors. And they were friends.

Plott hounds first gained national attention in 1935, when Baseball Hall of Famer Branch Rickey went on a legendary hunting excursion with Von and some others in the Hazel Creek area of the Smokies. News of the famous slugger’s appearance went what we’d call viral today, and young Bob loved to hear Von tell the story. “I was in awe,” he says. “I mean, this was the man who integrated pro baseball when he signed Jackie Robinson to the Dodgers! I still have the letter on St. Louis Cardinals letterhead that Branch Rickey wrote to Von saying, ‘You have the stamina of a professional athlete, and your dogs are amazing.’ ”

As he grew into his teens, Bob, who’d always taken his family’s Plott hound history for granted, developed other interests. After high school, he attended Western Carolina University, then later worked for years in the textile and racing industries.

Meanwhile, in 1989, other Plott enthusiasts were making a case for designating the breed as North Carolina’s state dog. Senator Robert Swain of Buncombe County introduced the bill and then, in April of that year, State Rep. Hugh Lee of Rockingham brought his Plott hound, Lucy, with him to a senate committee meeting. 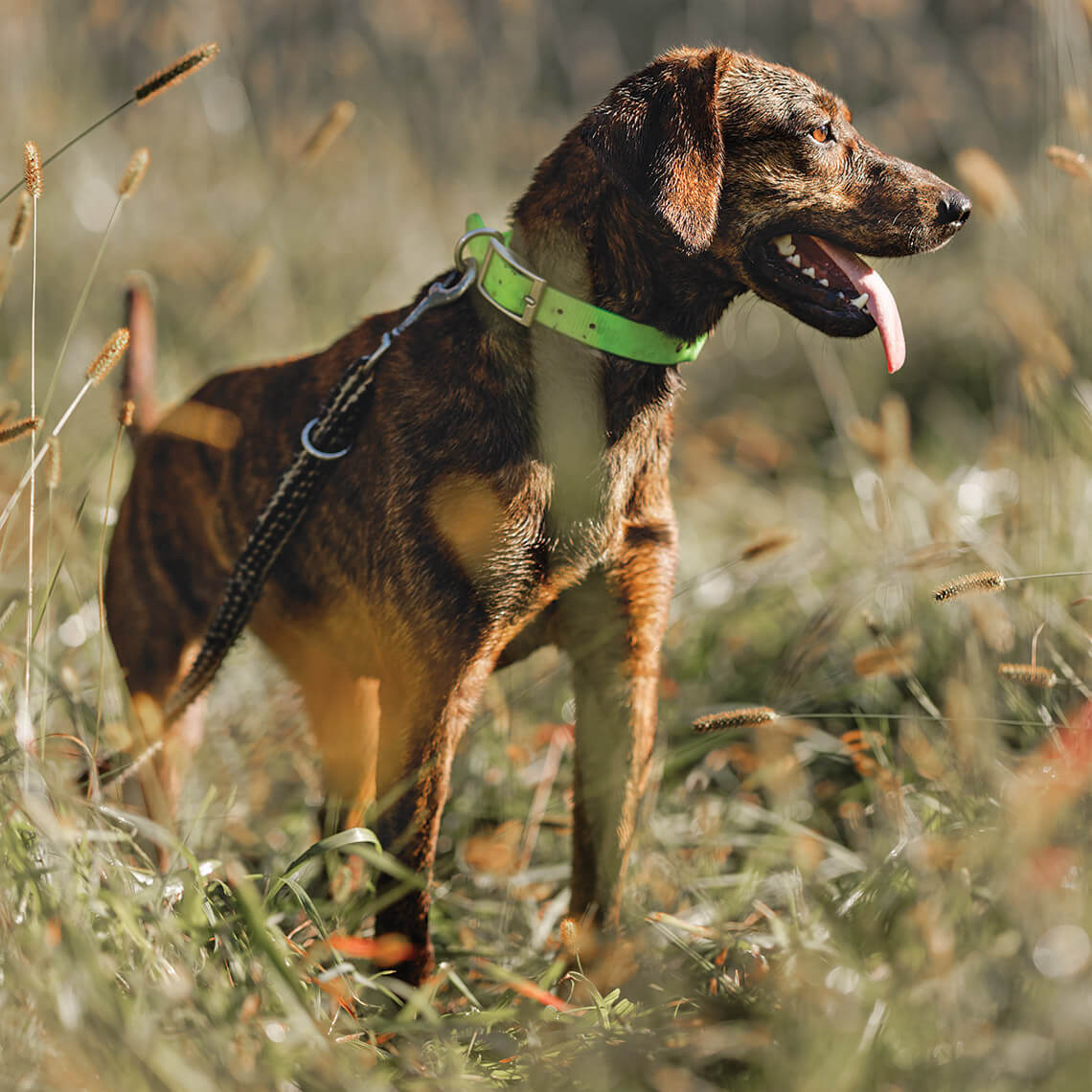 It’s important to leash a Plott hound during walks. Because of its powerful olfactory system, the dogs become intensely curious about everything they see and smell. photograph by Jerry Wolford & Scott Muthersbaugh

Lee and Swain spoke of the dog’s uniqueness to North Carolina, as well as its phenomenal hunting abilities. Not only do the breed’s sensitive nose, passion for the chase, strength and agility, and utter fearlessness when trapping large game make them perfectly bred North Carolina hunting dogs, but their loyalty also makes them ideal family pets.

“They can be good with children,” Lee said at the meeting as Lucy sprawled nearby. “But yet you can take them out and they’ll fight with a bear to the death.” What’s more, Swain noted, “They’ll hunt for their master. They’ll protect him. They’ll do all these things. Why, hell, a state bird won’t do that.” The bill was approved that August.

A few years later, following the birth of his son, Bob began to reconnect with his roots so that young Jacob Plott would have a better understanding of his family’s legacy. In 2007, Bob wrote his first book, Strike and Stay: The Story of the Plott Hound. He’s since written five more. The following year, the Plott hound made its debut at the Westminster Kennel Club Dog Show. And in 2016, Bob was awarded the prestigious Order of the Long Leaf Pine, one of the highest civilian honors granted by the governor of North Carolina. “This has become my life’s work,” he says. “It’s just so rich with history.”

Ten minutes west of Maggie Valley, on a quiet stretch of the Blue Ridge Parkway, a breeze rattles the wooden sign perched at an overlook some 5,000 feet above sea level. “Before you lies the massive Plott Balsam Range,” the sign reads. “On one of its eastern slopes, Henry Plott, a German immigrant’s son, made his home in the early 1800’s.” Half an hour to the east of Maggie Valley, in the Hazelwood section of Waynesville, a bronze statue of a Plott hound sits next to a plaque that declares the dog “one of only four breeds known to be of American origin — originating here in Hazelwood in the 1750s.”

You can’t drive 10 minutes in any direction around these parts without seeing a road or a creek named for the Plott family, or cabins and houses built by Plotts in the late 19th and early 20th centuries. Even today, Plott descendants own many of the businesses — like the famed Stompin’ Ground, a country and bluegrass dance club. On the lawn back at the Meadowlark Motel, Cory Plott, owner of Plottware Pottery in nearby Clyde, has a booth set up where he’s selling utilitarian ware. When a visitor asks about his name, he smiles bashfully and says, “Yeah, we’re pretty much everywhere around here.” 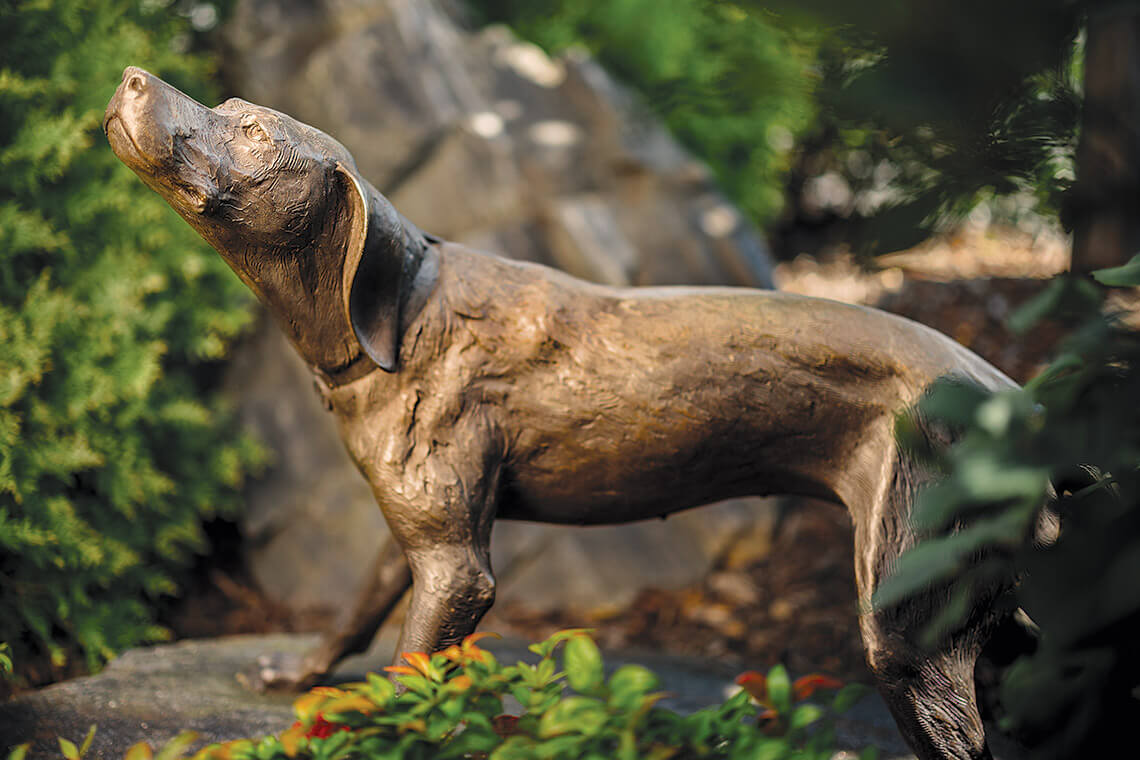 In 1999, Waynesville officials began a project to highlight the Plott hound’s importance to the town’s historic Hazelwood district. In 2017, this statue, sculpted by Todd Frahm, was unveiled in a local mini-park. photograph by Jerry Wolford & Scott Muthersbaugh

John Jackson, a former president of the American Plott Association who helped the American Kennel Club establish standards for the dog, credits the Plott family for their role in the development of the breed. But he says that many others — like the branchwater mountaineers, skilled hunters who lived not in the towns and cities or on farms, but in log cabins deep in the hills and hollers — were just as instrumental. “Wherever that branchwater mountaineer would go when he went out to work, well, the dogs’d go with him,” Jackson says. “And while that man worked, the dog would be honing his hunting skills.”

The crowd around the motel has begun to swell, and Bob scans the festival area with a look of pride. People have traveled here with their dogs from as far away as San Diego, California — and as nearby as down the street. “I’m proud of my family’s legacy,” Bob says. “But what’s even more special to me are all the other folks for whom these dogs are important. My relatives and I may be the only ones here with the last name Plott, but all these other people — people who were friends of the Plott family, people who’ve bred Plott hounds and love the breed and are willing to travel just to be with others who love the breed — they’re the ones who continue to perpetuate this legacy that’s so unique to North Carolina.”

He removes a faded photograph from his family album and walks over to one of the dogs tied to a tree next to the creek. In the snapshot, dated 1870, an ancestor stands next to a powerful-looking dog with a big barrel chest and a stately stare. It looks exactly like Stoney, the buckskin Plott hound that Bob reaches down to pet. “Look at this guy,” he says. “I’ve always said that when you touch the face of a Plott hound, you’re touching the face of history.”