The musky perfume of dark purple muscadines and green-gold scuppernongs announces autumn in eastern North Carolina. While many think that they’re two different kinds of grapes, scuppernongs are actually a variety of muscadine, and an old one. Scuppernong was the first cultivar of muscadine and was named after the area of Tyrrell County where it was first recorded in the 18th century. For those accustomed to the taste of European grapes, the distinctive earthiness of muscadines is something completely different. But for those whose roots are in the rivers and swamps of the Coastal Plain, it’s a sweet memory. — Debbie Moose 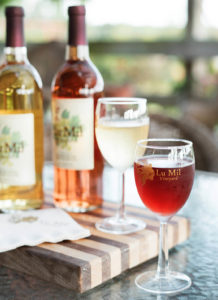 Lu Mil Vineyard began when Ron Taylor and his late brother, Oren, planted grapes to test the viticulture equipment that they were making and selling. The semisweet Taylor Divine scuppernong blend is one of their two original wines. “We felt it was appropriate to tie the names of our first wines to our family,” says co-owner Denise Taylor Bridgers, Oren’s daughter. The 78-acre family farm grows muscadines on land that belonged to the brothers’ late parents, Lucille and Miller Taylor, for whom the winery is named.

The slogan “Doing Wine Southern Style” has been owner Tom Bradshaw’s vision for Twisted Vine Winery since he started selling muscadine and other fruit wines in 2014. Though muscadines typically grow best in eastern North Carolina, Twisted Vine’s grapes are planted on fertile former pastureland, whose soil helps them thrive in the foothills. The golden bronze scuppernong wine, Cindy’s Select — named for Bradshaw’s wife — is their most decorated wine.

James Stephens and his wife, Larrissa Kulikoski, make all the wine at Stephens Vineyard and Winery — around a couple thousand gallons annually. Their most popular muscadine, the Robert S. Lee scuppernong, reflects the names of several of their family members. Their wines have around 7 percent sugar, making them drier than many other muscadine wines, Stephens says.

Bob Hinnant tried to grow many different kinds of grapes, but none fared as well as the muscadine, with its thick skin and ability to handle heat and humidity. In 2000, Hinnant and his father started the winery from the grapes they’d been selling to grocers and the vines they had used to make decorative wreaths for people in the community. Although they offer many muscadine blends, the Carlos scuppernong wine is their best-selling white and has won many awards.

Members of Duplin’s Heritage Club can enjoy the winery’s new Mothervine Reserve. Duplin started its 54-acre Mother Vine vineyard in Rose Hill in the late 1990s, after receiving clippings from the 400-yearold scuppernong Mother Vine in Manteo. Jonathan Fussell, who co-owns the winery with his brother, Dave, says that he likes the Mothervine Reserve because it “reminds me of when my dad made wine.” His father and uncle began the winery in 1976, and the recipe for their original scuppernong wine, the one with the green label, hasn’t changed since.

Multicolored drink umbrellas top off Grapefull Sisters’ famous wine floats: a scoop of rainbow sherbet floating in Sunset Blush, a scuppernong and noble grape blend. Sunset Blush is fruitier than their most popular wine, Old Timer’s Festival scuppernong. Sheila Suggs- Little, who owns the winery with her sister, Amy Suggs, says that they “wanted a unique taste for the scuppernong, and we think we did that.”

WoodMill Winery began when owner Larry Cagle Jr.’s father was diagnosed with a heart condition, and his doctor suggested that he start drinking red wine. Struggling to find one that he liked, the family decided to make their own, choosing muscadines for the grape’s many antioxidants. They designed their wine menu, which also features fruit wines, with a range of sugar levels (sweet, semisweet, semidry, and dry) for each wine, including their Golden Scuppernong. The minerals in the mountain clay, rather than the Coastal Plain’s sandy soil, give the wine its unique flavor, Cagle says.