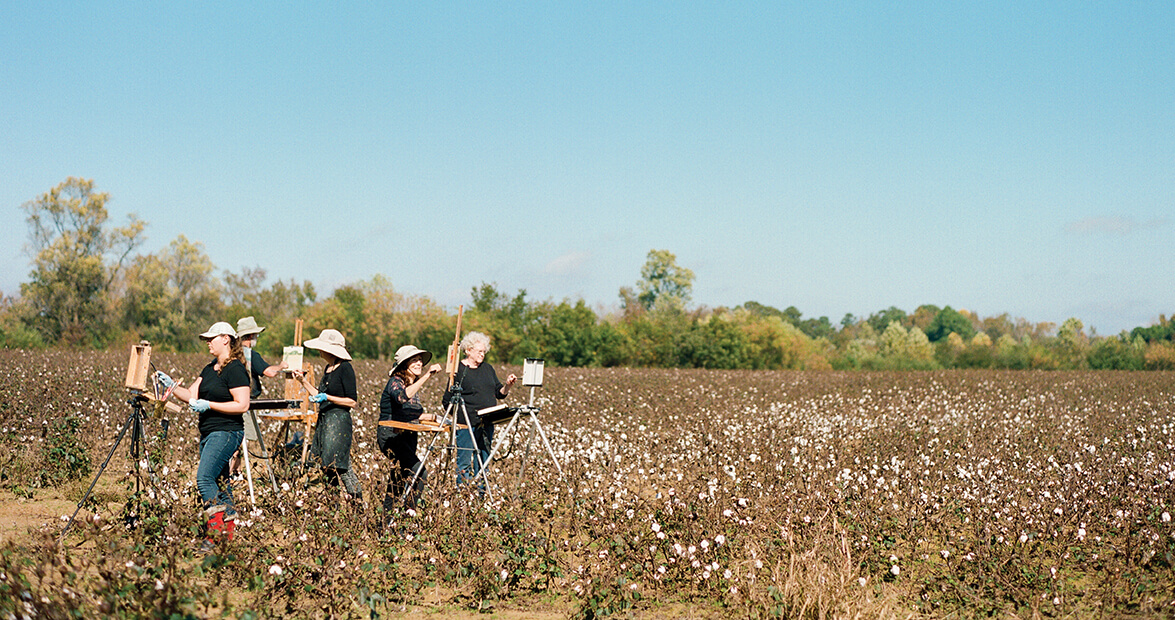 First, you find a place: a pond, a field, a stand of trees — somewhere the light is warm yet throws shadows.

Then you set up a tripod, fasten your box of paints to the top of it, and open the box so that the lid is facing you — like a large cigar box. Clip a flat board to the lid, also facing you, of course. That’s your “platform” — you paint on that. You mix your paints in the bottom of the box.

Chip Hemingway, who taught me the basics of plein air painting in 2008, suggested I start with only red, blue, and yellow — and some white to blend in when needed. “Make all your colors from those three, Clyde,” he said.

Plein air is a French phrase that means being outside and painting a scene. The term presents a slightly cavalier air of adventure. While some artists paint inside in a studio, a plein air painter takes to the fields and streets, often finishing a painting in an hour or two. You paint relatively fast because the light is changing as the sun moves across the sky, and if you’re too slow, you might lose the effect that you started with — and wanted.

You learn that painting in the late afternoon or early morning is best: That’s when you get warmer, more desirable light from the side, not harsh light from above. 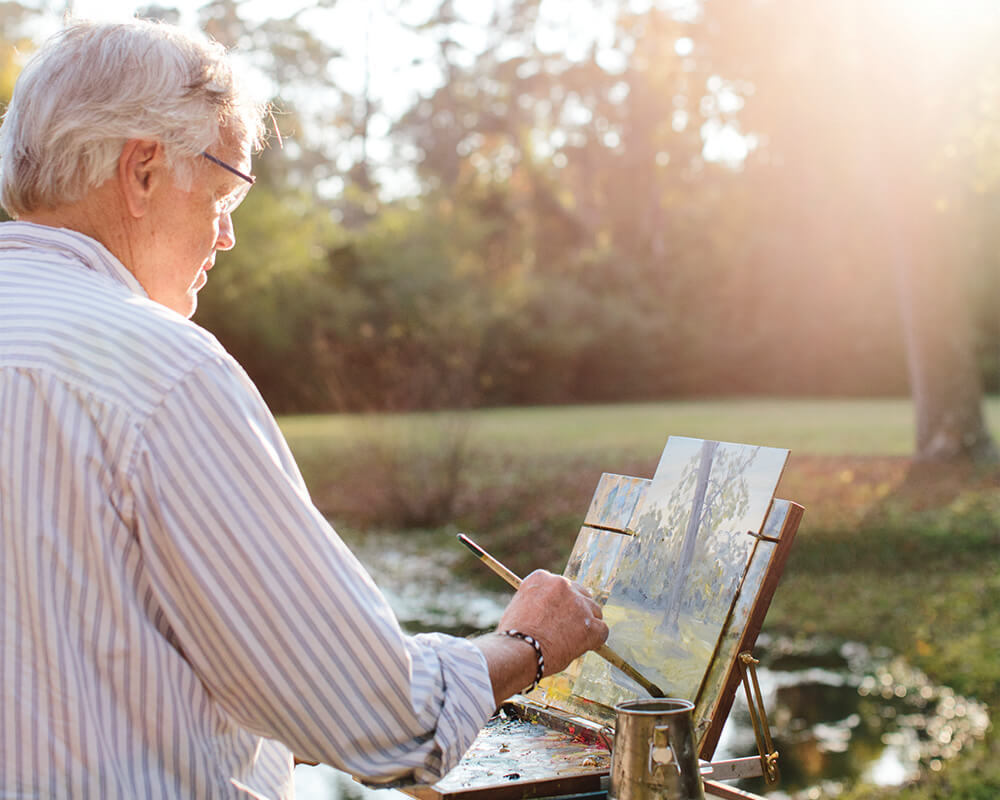 Clyde Edgerton doesn’t have to go far for inspiration. The subject of many of his works is his backyard pond near Wilmington. photograph by Millie Holloman Photography

In the past year or two, I’ve finished about a half-dozen paintings that look across a pond in my backyard — en plein air. I’ve learned that in the early morning or late afternoon — known among painters and photographers as the “golden hours” — sky reflected in the pond water will likely have a warm yellow or orange cast, rather than light blue, and that can add interest. Lit from the side, the main tree by the pond will more likely “pop” from the canvas.

And rather than tackling a plain green lawn at noon, painting during the golden hours will cast shadows across the treeless areas, which will likely create “movement” in the painting.

Chip told me early on to make my sunlight yellow and my shade purple (red and blue with a little white, maybe). He showed me that you can make black by mixing red, blue, and yellow; then, if you mix in more yellow, you have a deep green. You can mix different amounts of yellow and blue for various greens.

• • •
This knowledge is necessary in order to paint trees. Before I started painting, I could not have imagined the trees in our state to be so varied in shape, texture, and color. As I began to read about painting, I began to see that tree trunks in the shade are often almost black. Or if it’s late or early in the day, they might be gray or yellow on one side, and nearly black on the other. Within the foliage, you will find dark, shady areas that contrast with the areas where sun is reflecting — ah, such a lighter shade of green than the rest of the tree. 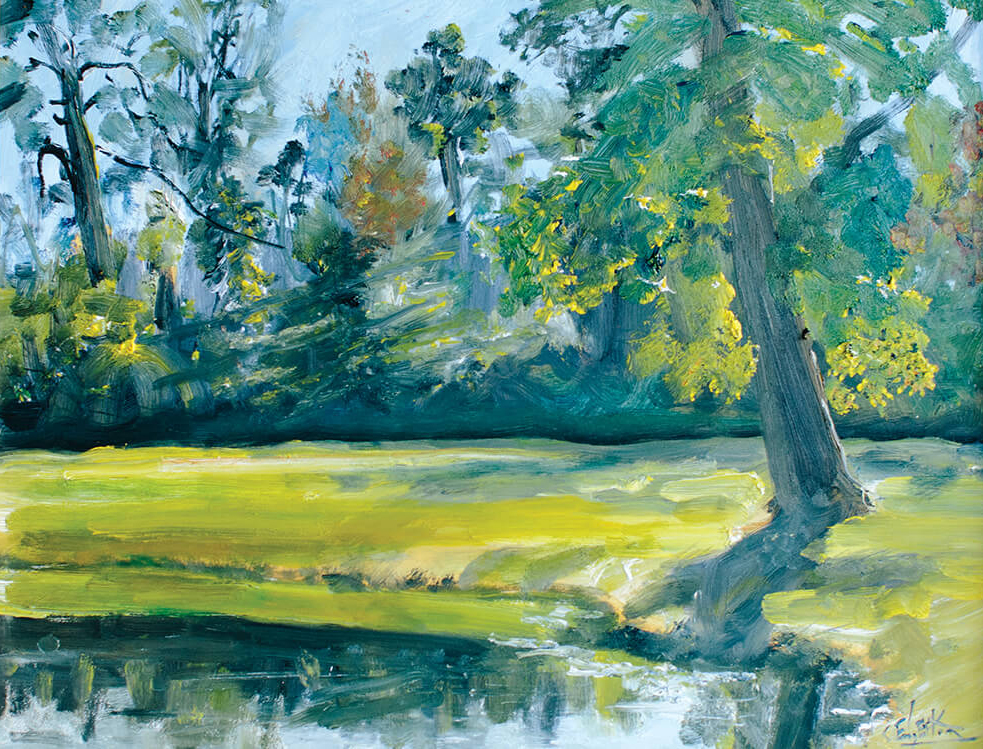 My favorite tree in the world, the cedar, grows across most of the state. These short, thick trees with the ebony shadows seem to be most plentiful in a 30- to 60-mile range around Greensboro. After I decided to keep my plein air paint box in my truck, I found myself pulled up into a field, the truck tailgate lowered to hold my paints, brushes, and a board. A single cedar was my subject.

• • •
When Chip and I met, I’d only finished a few paintings. The main one was a green 1950 Chrysler. I had hoped the marketing people at my new novel’s publisher would use it as my book cover. (I’m sure they are still laughing.)

When Chip got wind that I was using acrylics (water-based, fast-drying), he said, “Switch to oils.”

I did, and it was like going from a Chrysler to a Cadillac. The paint was smooth and I could keep changing it, playing with it for days, rather than for an hour or two. Acrylic paintings can be beautiful, and some painters swear by it, but I love oil.

So there’s a blank board to paint on and the pond and tree out there in the air in front of you. First, cover your board platform (or canvas) in any thin background color. I usually use a light brown; as a primer, it makes applying the top coats a little smoother, and it will fill in the spots you miss.

It took me a year or more to relax when painting water. The reflection of a tree or a boat can be a single, simple brushstroke.

Sometimes I’ll cover the board or canvas in red acrylic paint and let it dry. A red background can bleed through in the right places to make the painting feel richer. I’m beginning to experiment with backgrounds of different colors. A friend suggested painting on black. I’ve yet to try it.

Next, find your horizon line — the division between the sky and ground. A rule of composition is to place the line a third of the way from the bottom. Of course, the line could be a fourth of the way up, or an eighth, or halfway. With any art, embracing uncertainty is what distinguishes your painting (and in a sense makes it more human) from many political and theological certainties.

I’ve painted scenes along the coast, in the North Carolina mountains. I’ve painted while perched in Piedmont fields — my tripod in front of me as I stand, look, think, paint. Each section of the state provides different promises and problems.

It took me a year or more to relax when painting water. The reflection of a tree or a boat can be a single, simple brushstroke. Foam at the top of a wave can be a quick wiggle of a brush with white paint. And after reading that a combination of horizontal and vertical strokes can create the “feel” of water’s surface, painting these scenes became easier. It also helped to discover that waves in water are similar to mountains on land, with one side of a wave cast in shadow and the other, light. Realizing that wet sand reflects like a mirror made for more “popping.”

I’ve painted the sweet hills, small mountains, and meadows around Boone, West Jefferson, and Sparta. I like painting these hills better than larger mountains in other areas of the state, although some painters are drawn to the big, the majestic.

You can, if you are lucky, find just the perfect piece of land in North Carolina, get to know it, and paint it. In doing so, the painting transcends the art and becomes a personal expression, your essence.