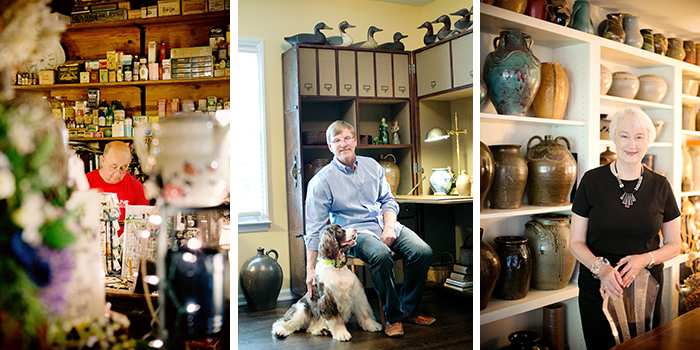 At least 200 pieces, nearly all from North Carolina, line her shelves and sit beneath her piano and spill from all four corners of the room. Teakettles and candlesticks and decorative animals and 15-gallon jugs. A potpourri of colors and designs: cobalt blue and orange peel red and turquoise and green and brown; drips and crystals and swirls and kaleidoscope patterns. Sometimes Harriet Herring just sits and stares at them.

“They’re like eye candy,” says Herring, one of the Triangle’s largest pottery collectors. “Would you please just look at these things? And they’re all from the shadows of North Carolina.”

Her pieces were created by several notable potters: James Owen, Daniel Seagle, Solomon Loy. She bought her favorite piece — a five-gallon, salt-glazed, red chrome crock from Chatham County  — from Jon Lambert in 2010. The early 19th-century crock is by Nicholas Fox, one of the Piedmont region’s most renowned potters during the utilitarian era of pottery prior to factories and home electricity. Craftsmen developed ceramic crocks to store household foods like lard, sauerkraut, stew, and butter.

“It’s got wonderful drips that crawl down when the wooden kiln gets hot, which is what we want,” says Herring. “Feel the runs. Isn’t that …” Grasping for the words, she squeals instead, and covers her face with her hands like a child with a Christmas present. “I just love it!”

Lambert purchased the crock through an agent, Gill Lunsford, the owner of Brick Alley Antiques in Mebane, and her former business partner, Ronnie Fisher. Lunsford saw the crock at an estate sale of a recently deceased woman, known for extravagant spending, who lived in a stone cottage near a remote pond. A vessel for straw flowers, the Fox jug sat on a cabinet in a small room near the kitchen. Lunsford brought several pieces of pottery from the house to Lambert that day, “But Jon grabbed this piece right away,” she recalls. “He knows so much about pottery that we don’t.”

Herring was raised on a Greenville farm, and her family kept old crocks to store basic cooking ingredients — vegetables, salt, vinegar — in the corner of the smokehouse.

“It wasn’t very sophisticated, but I admired the hard work and integrity and honesty of those pieces,” she says. “The potters who made them showed such dedication and concentration.” Herring most appreciates the older pieces, recalling a time when generations of family members made pots to subsidize their farm income. “My dear, everything was homemade,” she says. “In the 1800s it was poor down here. There was virtually no industry.”

When she was in her 30s, Herring came to Chapel Hill for nursing school at UNC, and later went to work at a hospital intensive care unit in Morehead City. She helped save the lives of her patients, a fitting role for someone who now seeks to preserve 19th-century pottery.

“We have these things, and I’m just trying to look after them,” she says. “I’m taking care of them to pass on to the next person.” 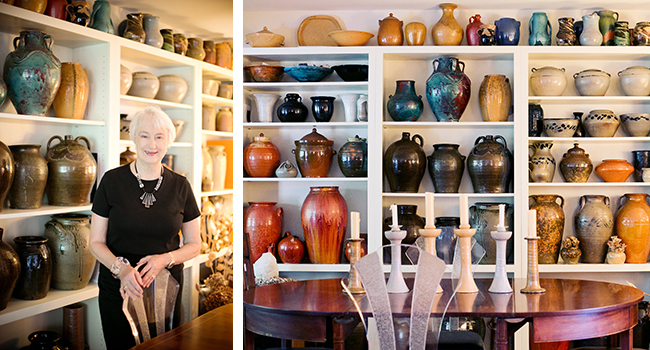 When fields were freshly plowed and rain had flattened the land, 6-year-old Bragg Cox would visit his uncle’s Harnett County tobacco farm and search for arrowheads.

“They were sitting up on mounds, almost like they were waiting for you to get them,” recalls Cox, who now lives in Cary. The arrow points, made of flint and quartz, were made by indigenous Native Americans who lived in the region 5,000 to 7,000 years ago. Cox picked up so many arrowheads that his mother would repeatedly check the pockets of  his jeans before she did the laundry.

Cox’s childhood hobby marked the beginning of a long collecting career. He now owns one of the finest collections of local antiques in the Triangle. His shelves are stocked with 18th- and 19th-century pottery, along with vintage canes bearing ornate carvings, duck decoys, and baskets. But he’s most fascinated by a basket about the size of a clenched fist, so light that it could be lifted by a gust of wind. The basket was made by Mary and Eliza Shelton, sisters who wove some of the finest baskets in North Carolina at their Forsyth County home during the late 19th century.

“Just imagine the time they must have spent to make this,” says Cox, admiring the basket in his hands, and suggesting that it was made to store jewelry. “It’s so dense, almost like it would hold water. And it’s untouched — never cleaned or washed. This basket has a totally original patina.”

The Shelton sisters, from Bethania, wove their baskets with split oak, and marked most of their creations with a small cross-band “x” and a tiny nail on either side of the handle, says Cox. They worked during an era when baskets were used for everyday chores, like picking beans, collecting eggs, and transporting cotton.

In 2007, Jon Lambert called Cox about the basket, which he’d obtained from an Alamance County picker named Bob Slaughter. Slaughter is now deceased, but his son, Jeff, recalls the day his father bought the basket, during the 1990s, for a steep price. “And I said, ‘God, for that?’ ” Jeff recalls. “But he said it was one of nicest small baskets you’ll find. I thought he was crazy, but he had an eye for that kind of stuff.”

“It was an insane amount of money, but it’s one of the best examples of Southern basketry anywhere,” says Cox, a former contractor sales manager for Lowe’s who is now semi-retired.

Cox keeps three-quarters of his collection in storage, rotating pieces into his house every few months. His pottery dates from the early 19th century and was created by legendary artists, including C.B. Masten, B.B. Craig, James Owen, J.M. Hays, Charlie Teague, and W.C. Ruth. His duck decoys come from across the East Coast. Most are carved from juniper and white pine, and made prior to the 1960s, when plastic decoys were introduced. Woodworkers customized each decoy to mesh with certain bodies of water. North Carolina decoys were often constructed of canvas — more so than any other place in the country, says Cox.

Cox feels a personal connection to his antiques. After launching his basket and pottery collections, the Cary collector began taking pottery and basket-weaving classes; after initiating his duck decoy collection, he became a duck hunter. Nowadays he carves decoys himself. The casual craftsman enjoys the folk culture behind the antiques, and envisions the work that went into creating them. “In my head I can see the Shelton sisters cutting and splitting the wood for the baskets in the house. I can see the duck decoys carved, then placed on the freezing cold water, gunners taking aim.” 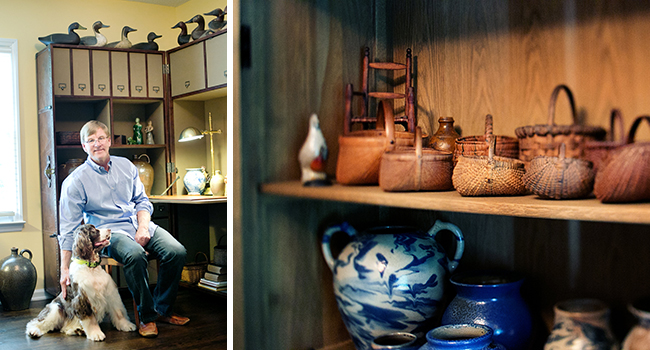 The calendar depicted a redheaded actress wearing a gown with ribbons, seated beside a table with flowers. It hung on a nail in a small room in a yellow Georgian house on a Durham farm for decades. Laid out on a single sheet of paper, the calendar was produced by Coca-Cola in 1899 and declared that Coke could cure your headaches and relieve your mental and physical exhaustion. Thirsty Americans could purchase the tonic at the local soda fountain for five cents.

Curtis Booker is explaining this story of the calendar inside Patterson’s Mill Country Store, which he manages with his wife, Gail. The store sits near I-40 on the former plantation site occupied by five generations of Booker’s mother’s family since 1834. Booker still lives on the land, as does his 91-year-old mother, Elsie.

Elsie graduated from UNC’s pharmacy school in 1945. Early in her career, she worked with elderly pharmacists, many of whom kept old medicines in storage. The pharmacists permitted Elsie to remove the old pills, and a collector was born. During the 1960s, Elsie and her husband traveled the country on collecting jaunts, visiting country pharmacies and junk stores. In 1973, the couple opened Patterson’s, which includes a replica pharmacy from the early 20th century, its shelves filled with Elsie’s old medicine jars. Scales, cork presses, funnels, and the typewriter Elsie used to write prescriptions sit on the counter.

But about that calendar. Elsie’s great-great-grandmother purchased the colorful marketing kitsch in 1899 and hung it on an otherwise bare farmhouse wall. When the matriarch died the following year, her granddaughter — Elsie’s grandmother — refused to remove the calendar. Elsie, born in 1923, made daily visits to her grandmother’s home, where she, too, was enamored with the calendar’s subject. The actress was Hilda Clark, who appeared to be writing a letter. To Elsie, Clark represented city glamour.

Not long after Elsie’s grandmother’s death in 1946, the family renovated the house and rented it to college students, later restoring it. (The home is now Leigh Farm Park, part of a heritage park managed by the city of Durham.) “My mother always told me stories about the calendar, but after the house was renovated, everyone assumed it was gone,” says Booker, a retired high school English teacher.

In 1970, Booker got a call from his great-uncle’s widow, asking if he’d go through old trunks in the attic of the family home. As he lifted out piles of junk, Booker spied it sitting on a tray: the Hilda Clark Coca-Cola calendar. “I’d never seen it before, but I’d heard the story of the calendar repeatedly from my mother, so I knew exactly what it was,” he says. It was in three pieces, though, and needed restoring. Booker tucked it away in a box in his store.

In 1996, 26 years later, Jon Lambert paid Booker a visit. Lambert was looking for Coca-Cola items for his big annual mercantile sale. For the first time since the 1970s, Booker dusted off the Hilda Clark calendar. “Doubt you could get much for this, considering the condition,” he said, but he took Elsie to Lambert’s auction. The calendar sold for $9,300 to a phone bidder in California.

For Booker, the calendar “made me think of my great-grandmother and great-great-grandmother,” he says. “I was the only child of an only child, so I grew up with the older members of my family. They were all born within five miles of each other, and I heard their stories all the time. That calendar was very meaningful to me.” 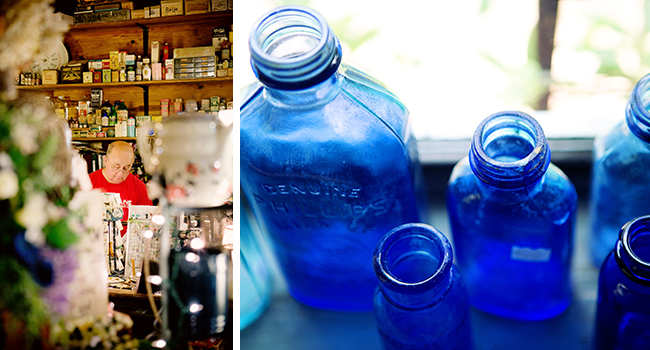 John H. Tucker is a staff writer for the Triangle-based INDY Week.