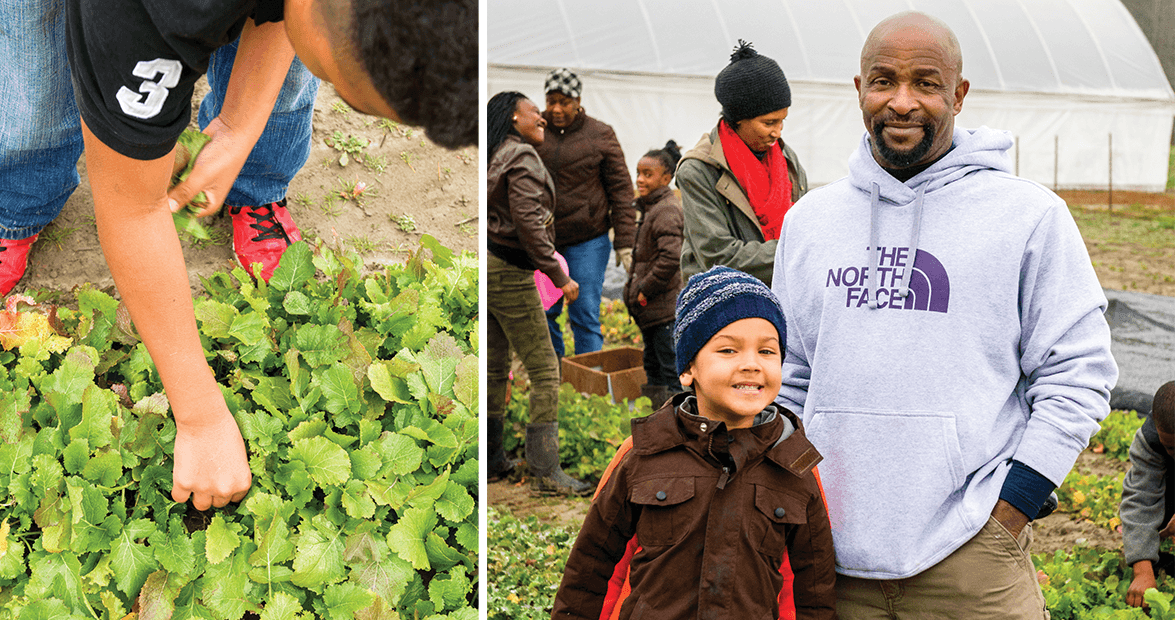 A gaggle of children in purple gloves and boots bend toward the dirt, snapping collard greens. Two girls shove bundles of veggies as large as their torsos into trash bags. Another kid leapfrogs over a row of plants on this 25-acre farm in Conetoe, a tiny village in Edgecombe County.

The children teetering along rows of collards, broccoli, kale, and turnips aren’t from farming families. Many of them come from less-than-stable homes. But on this crisp day, as the sun sets behind the pine trees surrounding the vast plots of vegetables, they have found nourishment.

The Rev. Richard Joyner conceived of this children’s farm — he calls it a community garden — eight years ago, after becoming pastor of the Conetoe Chapel Missionary Church. Edgecombe County is one of the poorest places in North Carolina, home to many homeless children, and Conetoe, with its trailer park and abandoned buildings, is an emblem of such blight. Through his garden, Joyner seeks to promote healthy living and, in doing so, instill confidence in youths.

“The truth of it is, it gives the kids something to give,” says Joyner. “It’s better than money. We’re giving them something that sustains a life.”

Called to the soil

Joyner was one of 13 children raised on a Pitt County farm, the son of a sharecropper who grew corn, peanuts, soybeans, and tobacco. Distressed by how little money his father made, Joyner wanted nothing to do with farming after high school. But after a career spent in the Army, National Guard, and Nash County General Hospital, where he is the director of pastoral care, Joyner was called, once again, to the soil.

Shortly after he became a pastor, the state labeled Edgecombe County as a food desert, Joyner says, with little access to fresh, local, affordable food. The minister noticed that several of his parishioners suffered from health problems. Many were overweight. Joyner presided over too many funerals. A thought occurred to him: Why not create a garden to foster nutrition and give poor children a sense of purpose?

Joyner approached a local farmer, Ernest Vines, and inquired about using some of his land. Vines offered up his entire farm. It took a year to bring in equipment, all donated. The first seeds were planted in 2007. What began as an after-school program morphed into a yearlong endeavor, culminating with a summer camp enrolling 60 kids, ages 4 to 16, who come from a 25-mile radius.

Joyner harvests more than vegetables: He uses the garden to preach the benefits of labor, economics, community relations, and self-sufficiency. At first, kids are often dismayed at the workload; it’s only when the crops sprout, and the eating begins, that they fully appreciate the effort. Eventually, they’ll start eating beans right from the vine. “True country living!” says the pastor, who runs the garden through his nonprofit, the Conetoe Family Life Center.

“My friends say I’m crazy ’cause it’s hot out,” says 15-year-old Abdul Grant. “But you don’t see a lot of people growing any garden, and this teaches us values.” Grant now wants to be a chef and tend his own garden.

Today, the garden is a veritable business, producing thousands of pounds of vegetables worth hundreds of thousands of dollars each year. Joyner and the children give much of the food away — to senior citizen homes, hospitals, and poor families, with the goal of cutting monthly grocery bills in half. They sell the remainder of the food at farmers markets. The garden is largely funded by community donors. Joyner has partnered with several churches to sponsor health fairs, as well as the county school system and local agriculture extension.

Abutting the garden sits a refrigerator and freezer donated by the Deer Hunter Society, a greenhouse that can hold one million plants, and a tunnel house, built by the community. Two local cats skulk the grounds, warding off snakes. There’s also a “Bee Bus” — an old school bus housing 50 hives. The kids climb aboard, extract the honey, bottle it, and sell it at the Family Life Center, area Lowes Foods, and local businesses like Milton & Miles restaurant and Almand’s drug store in Rocky Mount.

Joyner is typically the first to arrive at the garden and the last to leave; he wants the kids to see him as a farmer, not simply a minister. “You can’t be seen as someone standing at the pulpit yelling at these kids,” Joyner says. “If you’re gonna hold on to the kids in the rural church, you gotta go beyond Sunday.”

Though he never thought he’d get back into the farming he was born into, Joyner says the garden sustains not just human lives, but also memories. Older folks visit, sitting in the shade and watching the kids tend to the vegetables, reminding them of their own youth.

“When you put your heart, labor, and sweat into something, it becomes a part of you,” Joyner says. “It gives you value as a human being.”