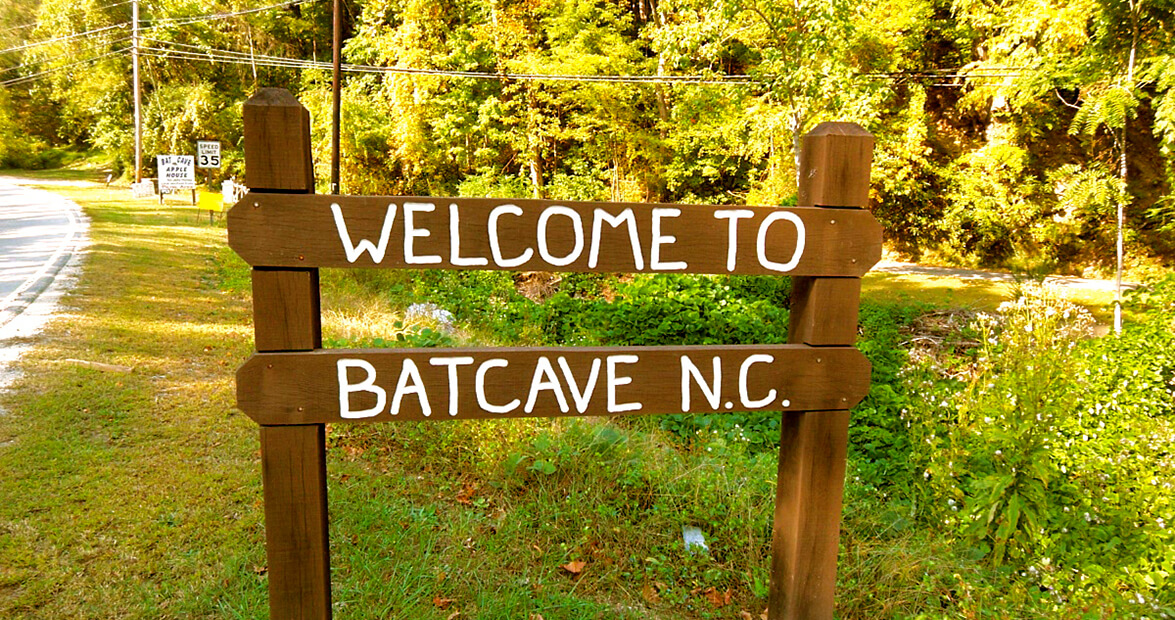 This unincorporated town in Henderson County might have a batty name, but it’s not completely out there. Bat Cave was named for a nearby cave that’s home to a lot of bats. Go figure. But holy bank checks, Batman! Local businesses in Bat Cave have been fortunate to capitalize on the enduring Batman franchise by selling themed products.

One logical explanation for the unusual name of this Outer Banks town is that those who settled there hailed from a hamlet or promontory in England with the same name. But another tale endures that pirates would tie lanterns to the necks of old horses, otherwise known as nags, in an attempt to lure and plunder passing ships.

Its elevation is only about 1,000 feet, so why was this city’s altitude considered significant enough that it influenced its nomenclature? High Point was chartered in 1859, three years after the completion of the North Carolina railroad that extended from Charlotte to Goldsboro. The area that would later be established as High Point happened to have the highest elevation along the railroad’s 223-mile path.

The name of this town is said to date back a long before the Wright Brothers took their famed flight. For some time after rum originated in the West Indies, the drink was alternatively called “kill-devil.” No one is exactly sure of the town name’s origins, but some say that after a shipwreck, scavengers tried to salvage the rum and hide it in the local sand dunes.

What is in a name? Well, if you had asked the man who came up with the moniker of the southern Randolph County town of Whynot, you would’ve gotten a fairly blunt answer. The town’s earliest residents couldn’t unanimously settle on a name for the local post office. Why not name it this? Why not name it that? One man who had had enough piped up, saying “Let’s name it Why Not, and let’s go home.” The town name eventually became one word, Whynot.

No need to ship an extra supply of Rogaine to the residents of Bald Head Island. River pilots named the village in reference to the lack of vegetation on its headland.

A French veteran of the Revolutionary War, William Fuquay, bought a prominent piece of land in the area where his son or grandson would eventually discover a hallowed mineral spring. Years later, a Confederate soldier, J.D. Ballentine, would receive letters from his admirer, Virginia Avery, signed with the pen name “Varina.” The two married, and after Ballentine became postmaster, he named the post office, which was located one mile south of the Fuquay Mineral Spring, after Avery.

As with all things in life, “If it looks like a Duck … it’s a Duck.” You guessed it: The Dare County town was named after its large population of waterfowl.

We can’t promise that Barbecue Township’s pulled pig is tastier than that of anywhere else in North Carolina. To early residents, the rising mist from a nearby creek looked like smoke from a pickin’.

Alas, a passerby once saw lizards sunning on a fence and licking themselves in this Wake County community.