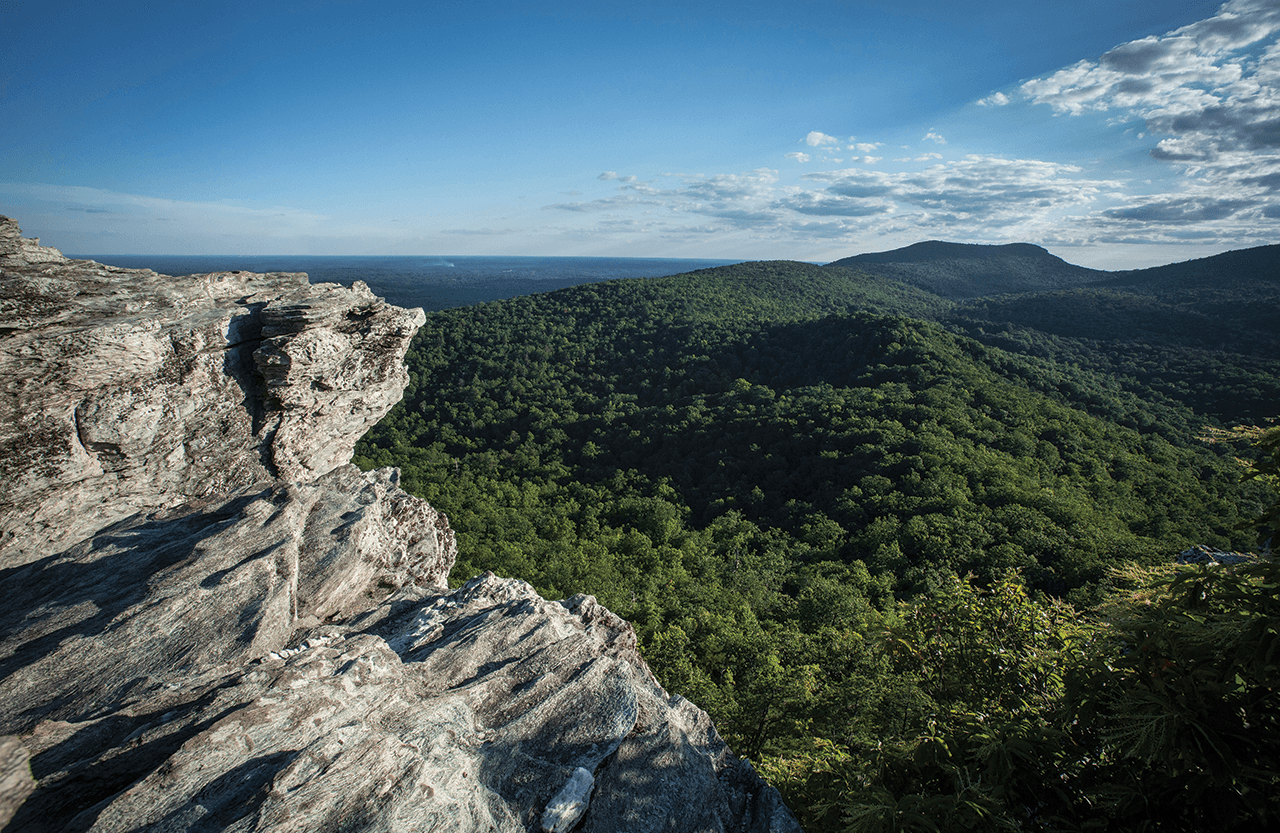 I could see it all from up there. To the east, the Piedmont rolled toward the distant horizon, a vernal blanket checked with farm fields and mounded with rolling ridges, church steeples glinting white. Beyond the hazy edge of the earth lay the Coastal Plain, its tangled bottomland forests giving way to pines and dunes and a blue-water horizon. To the west, I could make out the first pregnant swells of the Blue Ridge. Out there, I knew, gorges scored the land, and mountain ranges soared, and it all called to me. I was 8, maybe 9 years old the first time I climbed Hanging Rock, but even then, the view from the top of that ancient quartzite dome spoke to me. Standing there, on the bare granite cliff tops, I could see it all — all the possibilities of home.

Hanging Rock was the first place that rooted itself in my spirit, the place to which my imagination would return, again and again, even when I was far away. As a child, and even today, my heart jumps a bit at the very thought of Hanging Rock: the way the rock lichens spackle the cliff faces, the way the mica sparkles from each rock and boulder like constellations set into deep time. It was, and is, to me a sacred place.

We each have them, our sacred places. These are the untrammeled corners, the untarnished, undeveloped landscapes that offer more than a pleasing view. For me, the sacred places are natural places, and even the most urbanized North Carolinians, the suburbanites and committed city-dwellers, get a little hitch in their hearts at the sight of a snowy egret in a marsh, or a waterfall cascading through an autumn forest. Sacred places are landscapes that help us understand where we are, and who we are, and why we are. They’re places where we can stand, feet rooted to the ground, and see the past and the present and the future in a single moment. Sacred places remind us that we are only passing through — that there were others who cared enough to take care of the sacred places, and there are others who will judge us by how well we’ve done the same.

Long before I climbed Hanging Rock, that craggy cliff wall was a sacred place, beloved by the Saura Indians who lived along the Dan River in a pair of precolonial villages with views of Hanging Rock and Moore’s Wall and Pilot Mountain. And the Sauras were not alone, certainly, in cherishing notable landscape features. The Cherokee have the Kituwah Mound, on the Tuckasegee River, near Bryson City, their original settlement that the tribe lost in the 1820s, then regained in 1996. For the Lumbee, the swamps and blackwater streams that lattice the Lumber River lowlands are sacred places. The Waccamaw Siouan tribal nation are “the people of the falling star,” a reference to a meteor that is said to have struck the earth, creating a crater that filled with the waters of Lake Waccamaw.

Perhaps the first sacred place to be described by a European in North Carolina is a ford across the Yadkin River, near Salisbury, where, in the third week of January, 1701, a young man named John Lawson stood in reverie at the unknown glories of the uncharted Carolina backcountry. “The forward Spring welcom’d us with her innumerable Train of small Choristers, which inhabit those fair Banks,” he wrote in his A New Voyage to Carolina, “the Hills redoubling, and adding Sweetness to their melodious Tunes by their shrill Echoes.” I stood there more than 300 years later, in a deeply gouged ravine that’s likely the footprint of the old Trading Path, and climbed a jumble of boulders shaded by a sycamore tree. Small “choristers” were all around — thrushes and warblers chirping overhead — and I could see a long view up the old river, the same view that inspired Lawson. “One side of the River is hemm’d in with mountainy Ground,” he wrote, “the other side proving as rich a Soil to the Eye of a knowing Person with us, as any this Western World can afford.”

Three hundred years ago, John Lawson got the feeling that he was looking at a place unlike any other in the world. A sacred place.

I get that feeling whenever I cap out on some ridgetop or mountain — or tall sand dune — and catch a sudden, surprising view of the vastness of what remains sacred in North Carolina. I certainly get it along Grassy Ridge in the Roan Highlands on the North Carolina/Tennessee line. From the Appalachian Trail, the footpath to Grassy Ridge takes a hard south and climbs to the rooftop of the state. Set in the heart of the greatest forest in the South, meadows of hair grass and sedges unfurl like a blanket. Rocky outcrops stud the balds like the bones of ancient beasts. Such flights of imagination aren’t so far off the historical mark, for many scientists hold that grassy Southern Appalachian balds like the Roan Highlands are the artifacts of prehistoric plains, kept open by the likes of mastodons and mammoths and primitive horses. Stand atop Grassy Ridge, the wind bending the vast meadows into waves that race along the ridgetops, and it doesn’t take much of a leap of fancy to imagine the bison and elk that once were known to this region. The past is there with the present.

Not that all my sacred places afford a 100-mile view. Some are hidden along small Piedmont creeks or tucked into a field corner where I’ve watched the sun rise on countless hunter’s mornings. Some I’ve been to only a handful of times, or even only once.

Deep in the maritime forests of Shackleford Banks lies a little-known, unmarked burying ground of the old Ca’e Bankers, the last remaining of the Cape Lookout cemeteries most likely, all the others having washed into the Atlantic. I visited there once with David Yeomans, born in 1921, one of the last of the old natives of the old Cape Village, and who died in 2006. Yeomans and I squirreled under pine trees and gnarly oaks hung with Spanish moss to a glade of live oaks where the ground dipped underfoot, indentations in the forest floor the size of a man — and a child. Yeomans scraped away a scrim of wind-blown sand and live oak leaves and pine needles, and knelt close to the marker stone of his half-brother’s wife, who died during childbirth on May 2, 1918. “You have left us, darling Carrie,” Yeomans read aloud, “the road looks long and dark …” Few people know of the old burying ground of Wade’s Shore. But it’s a sacred place, for sure, sacred to those who can trace their family lines back to those depressions in the sand, and sacred to those who stand there in the dappled sun and see how a little piece of ground ties it all together — what was, what is, what is to come. Now Yeomans, darling Yeomans, has left us, and gone back to his sacred place. 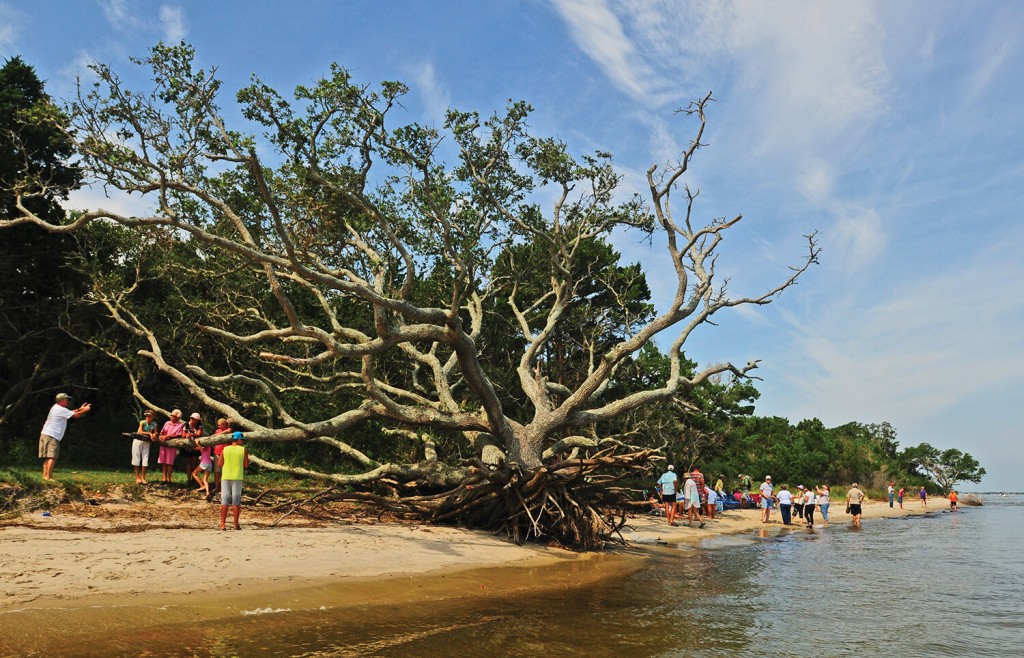 Thinking of Yeomans brings to mind that special, natural places aren’t necessarily pristine and untouched. They’re not necessarily places unknown to others, secreted away in some difficult-to-access wild corner. Often our sacred places are special because they gather various strands in our own lives, and they gather their meaning from the people with whom we’ve shared them.

I returned again to such a sacred place with my daughter, Markie, who was home for fall break of her freshman year at Appalachian State University. Our destination for a quick afternoon hike was no accident: There’s a particular bend in Crabtree Creek, in Umstead State Park, that’s one of my sacred places. When Markie was an infant, I’d put her in a baby backpack and strike out for Crabtree Creek at least once a week. We’ve walked there in spring’s green season, when I had to stoop low and use my hat to shield Markie’s face from thickets of trumpet vine and pawpaw. I’ve carried her there during the fall, when the foliage was a thousand shades of red, and held her hand as we waded the creek in the summer, following raccoon prints across the sandbars. Some of this she remembers, faintly. Some of this, I suspect, she tells me that she recalls because she understands how badly I want her to remember.

A half-mile in, the creek takes a sharp bend at the base of a ridge, and in the low glade, winter rain and snow-melt pool into a series of shallow, temporary ponds where salamanders gather to breed. Many times we’ve hiked there to carefully peer under fallen logs for spotted salamanders, and stood in awe as spring peepers called in a deafening chorus. Many times, but none of them in recent years.

The trail followed the creek bend to a sudden opening in the trees, with a view of the pools glittering in the sunlight. In the fall, they’re a diminished version of their winter selves, but recent rains had filled them, and a great blue heron took wing. “I remember this!” Markie piped up. “I love this place!”

There was no soaring vista, no crashing surf or majestic sunrise. Just an untrammeled, untarnished, unblemished patch of sacred ground, lit by sunlight and smiles, fraught with memory and promise. She remembered.

When we turned back, we retraced our steps on a trail we’d walked dozens of times, and, like all those times before, the woods and the creek and the sandbars and the fallen logs were at once familiar and fresh. It was like we were walking new ground, each step along the narrow path a quiet sacrament to a sacred place.

Editor’s Note: This story appeared in print as “Away From It All.”