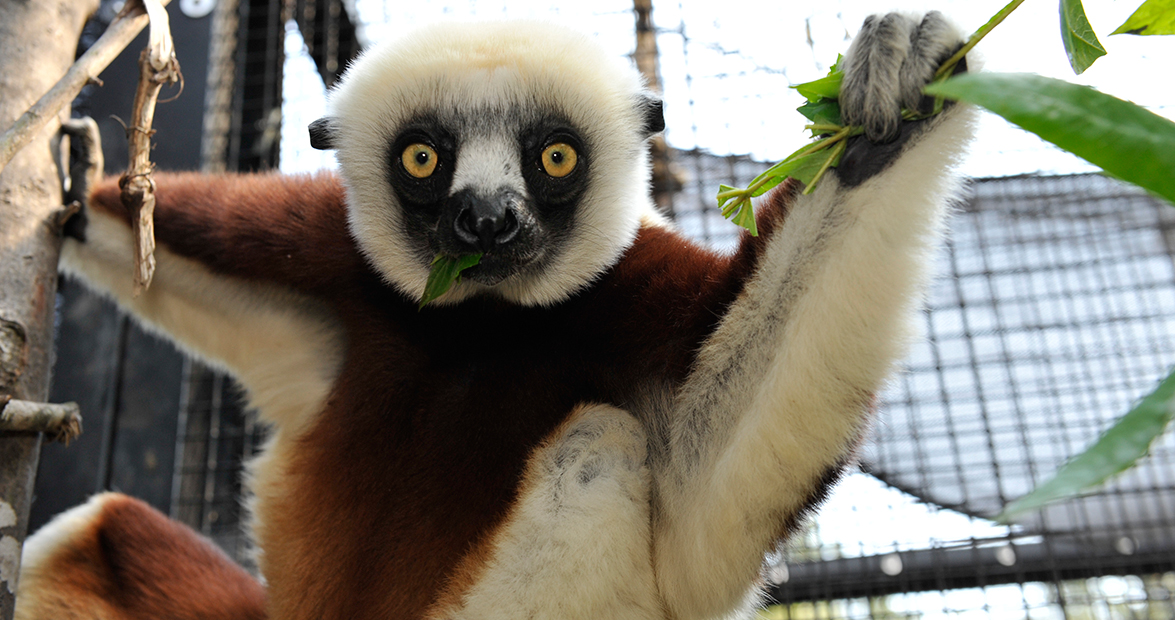 Brothers Romulus and Remus and their mother, Rupilia, can hardly wait. They excitedly hop down the wooded pathway, each clearing about a yard with every leap.

Today’s picnic is a smorgasbord: Broccoli and sweet potatoes, carrots and greens.

The two boys, 5 and 3, are not especially keen on their collards and pick around their bowls for the brightly colored stuff. Averse to anything labeled as “good for you” by Mom, they are your typical young boys — err — lemurs.

“They’re not too fond of collards when they have a forest full of green to eat,” says Chris Smith, an education specialist at the Duke Lemur Center.

Romulus, Remus, and Rupilia are among the 242 lemurs that call Durham their home.

Thanks to continental drift a long, long time ago, Madagascar is the only place on earth where lemurs can be found in the wild. How one corner of the Triangle became home to the largest population of captive lemurs in the world, however, is a whole other story.

Before the Duke Lemur Center existed, Duke University researchers studied goats and deer, Smith says. If they wanted to learn more about subjects like human behavior, cognition, and locomotion, they’d need access to one of our primate ancestors.

One day, John Buettner-Janusch, a Yale University professor, approached Peter Klopfer, a biology professor at Duke, about relocating his lemur colony from Connecticut to North Carolina, where the climate is warmer and more similar to that of Madagascar’s.

Klopfer and Buettner-Janusch founded the center not long after, in 1966.

In its near 50 years of operation, the Duke Lemur Center has not only become a haven to the world’s most endangered mammal, but it is also a place where the public can learn the importance of an animal they might’ve not known a whole lot about the day before.

We stand out in the open forest as these three lemurs munch on lunch. Provided that a lemur is trained and the weather is warm enough, it can roam freely throughout the center’s enclosed 70 acres during the day.

For visiting guests, the setup makes for fun critter watching.

Romulus, Remus, and Rupilia are Coquerel’s sifaka, which is the largest species of lemur that can be found at the center. Each of the 20 species at the center has its own naming scheme, and it is only fitting that this species is named after influential Romans.

Coquerel’s sifaka are mostly russet brown but they have a persistent patch of cream-colored fur on their head makes it appear as if they have afros.

Soon after they’re done eating, Romulus and Remus, a mischievous pair, head straight for our camera’s tripod for an inspection and climb on it as if it’s a makeshift jungle gym.

Rupila quickly takes notice of their interest, heads over, and quickly claims the tripod as her own. In the lemur world, females dominate, so the boys quickly get the picture. 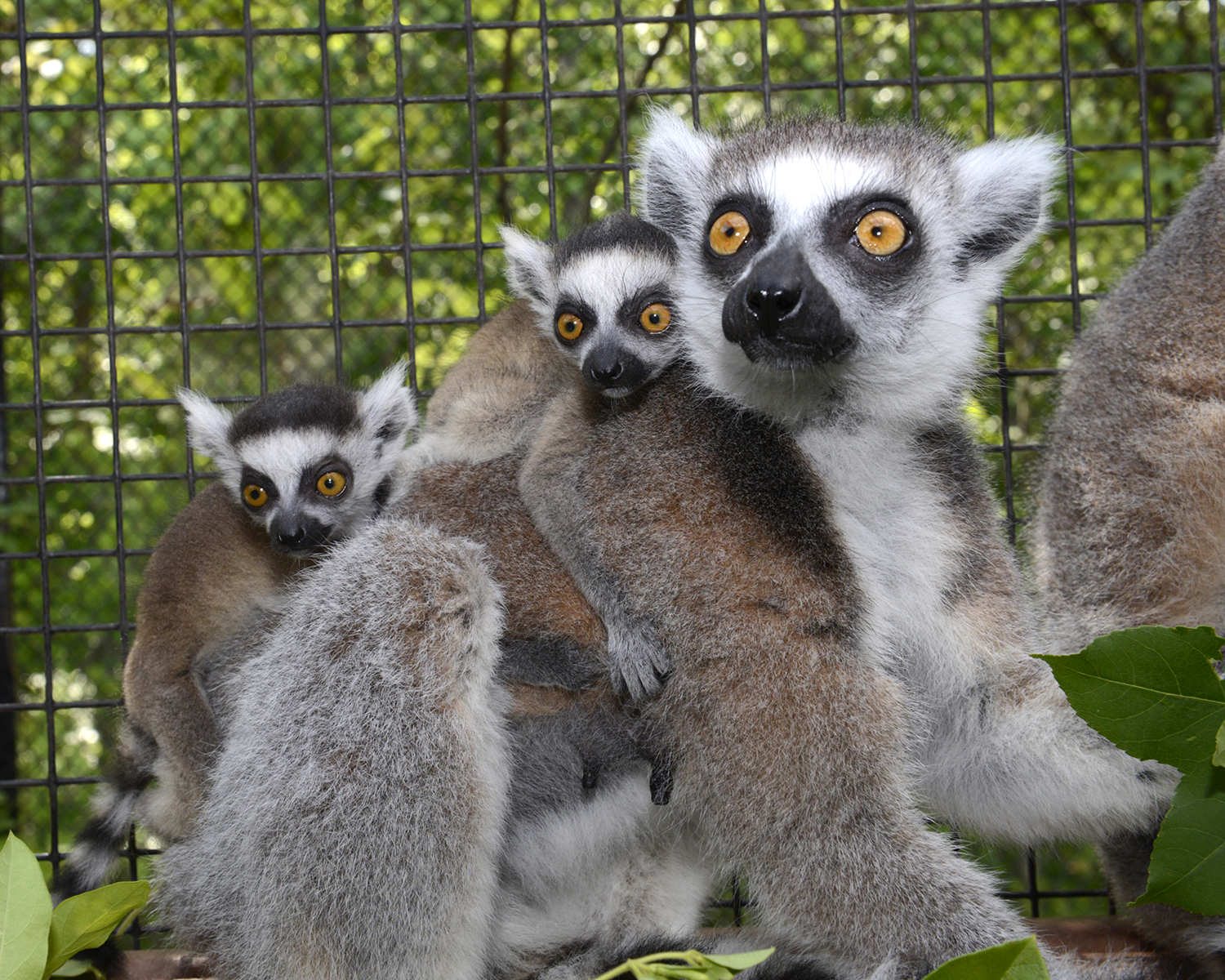 Two particular female ring-tailed lemurs have recently become the talk of everyone at the center.

The sisters were born May 4, 2015 and were named Princess Julien as heirs of the throne to King Julien XIII, who is “Lord of the Lemurs” in the DreamWorks Animation movie Madagascar and the Netflix Original Series All Hail King Julien.

It’s not the first time there’s been fanfare around the center’s residents. One lemur, Jovian, starred as Zoboomafoo on the popular children’s show with the same name in 1999 and 2000. He passed away in 2014 at the age of 20.

More recently, a few nocturnal lemurs starred in an IMAX movie dedicated to the animal. The lights from the cameras made them sleepy, but they were good sports and were treated to a lot of worms.

“How many actors in Hollywood would take that gig?” Smith jokes.

Much of what the center does is all in good fun, but as one sign reminds, “Save the lemurs, they have tails to tell.”

The human population has soared in Madagascar in recent years, and now nearly 25 million people call the island home, which has resulted in widespread deforestation.

“We obviously have a lot of work to do to make sure lemurs do not become quite possibly the first primates to become extinct in over 100 years,” Smith says.

In its conservation efforts, the center has researchers working in Madagascar helping local communities develop ways to protect them, and many people from Madagascar have visited the center in Durham to study lemurs.

“Having the lemurs here in Durham provides an exceptional opportunity to scientists and the general public to see lemurs and get to know them the same way folks in Madagascar are beginning to know, understand, and appreciate them,” Smith says. “We want everybody to love lemurs.”

As you make your way through the center, you begin to realize just how much you have in common with these curious little primates.

“You’ll see dominant females and males squabble over a bowl of food, as if they were fighting over the TV remote,” Smith says. “You’ll see families of dads, moms, and kids all huddled together taking a afternoon nap.”

Sure enough, you begin to hope these guys stick around for a long time to come, too.