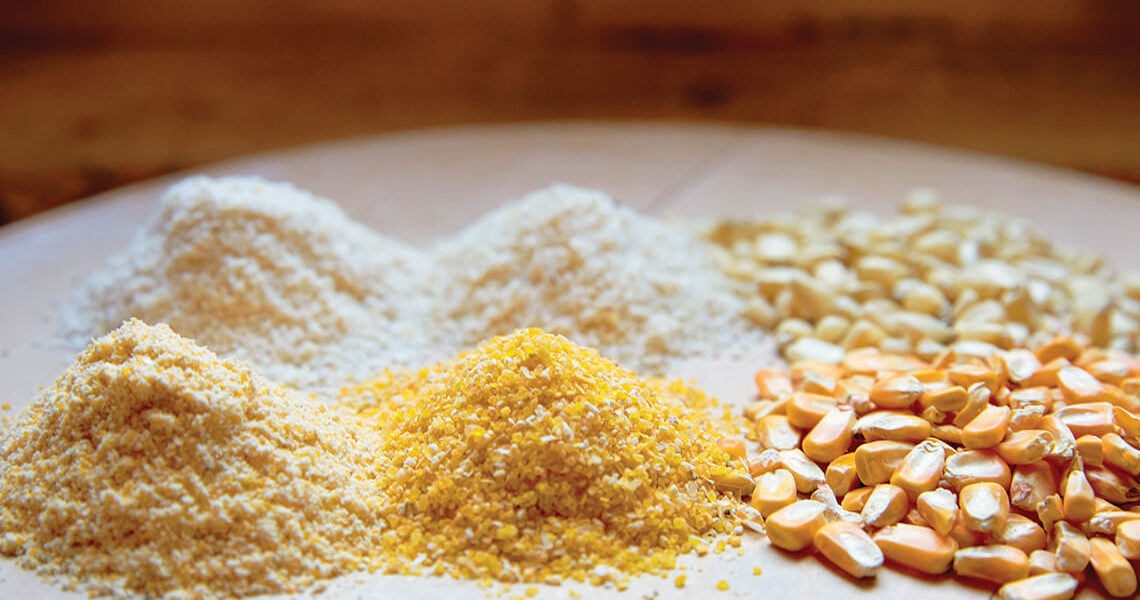 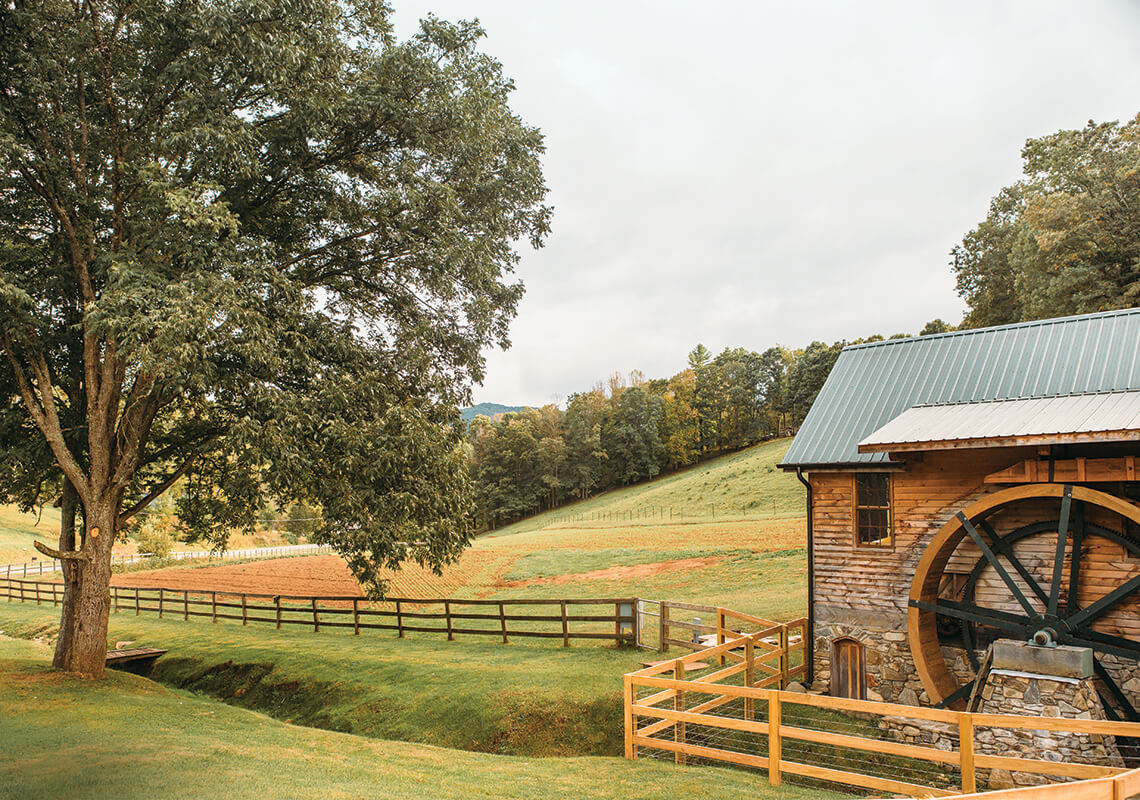 Though Barkley’s Mill was built in the modern era, its design is based on North Carolina mills of the late 19th and early 20th centuries. In fact, it’s powered by a waterwheel that once turned at an 1890 mill in Madison County. photograph by Tim Robison

Milling wasn’t on Jim Barkley’s mind when he and his wife, Iris, moved to western North Carolina in 1985. Jim owned a Toyota dealership in Asheville, but the couple hoped to put down roots in the country, and they fell in love with a 1925 farmhouse on a rolling plot in Buncombe County. Over the years, the Barkleys raised cattle and goats on their Southern Cross Farm, but the livestock never really stuck. Then, about a decade ago, it occurred to Jim that an old-fashioned gristmill could help him turn his land into something tangible to give back to the community. He hired a millwright and sought out equipment from century-old milling operations. He planned to grind only corn that he grew himself, and he sampled several varieties before declaring a favorite: “Hickory King Dent,” a white corn that’s been grown in this region since the 1880s. As he learned more about the rise of heirloom crops and Appalachian cuisine, Jim realized that his hobby had the potential to be much more — and a family business began to take shape. 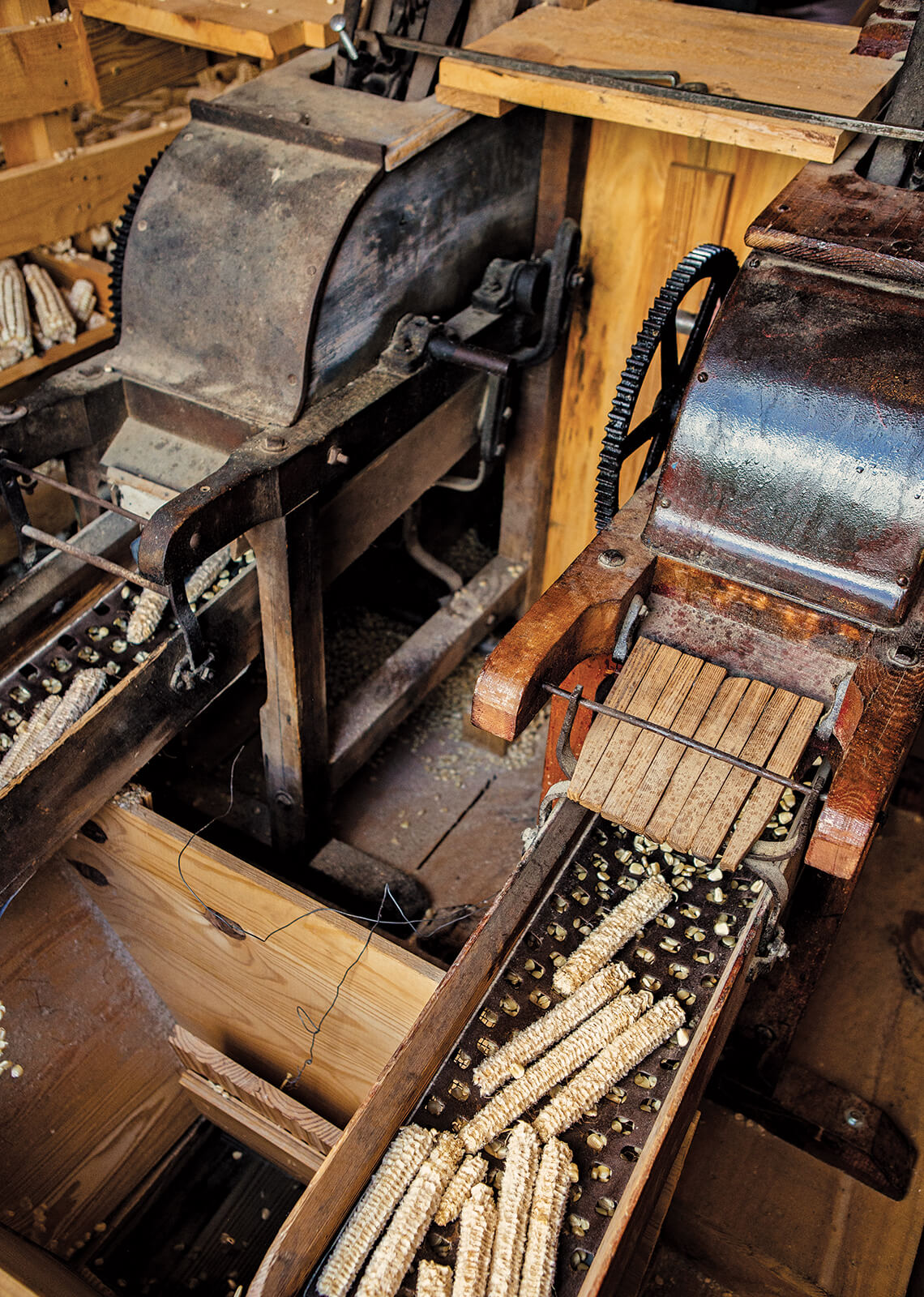 Ground to Gristmill It was important to Jim to do things the traditional way — that is, mostly by hand. In November, the farm’s five to 10 acres of corn are harvested, shucked, and hauled up to a big white barn, where the ears are spread out on a table and carefully inspected. Hickory King kernels are pure white, “and that’s all we want to go in our grits,” explains Jim’s son-in-law Micah Stowe, the farm’s operations manager, “so we rake out the bad stuff by hand.” The corn air-dries in a crib for 90 days, and when it comes out in February, it’s inspected once again before a pair of 1908 shelling machines free the kernels from their cobs. Then, it’s time to power up the millstones.

Homegrown Legacy The Barkleys’ first year of operating a mill, 2014, was a learning experience, Stowe says. They grew way too much corn, they only had one gristmill to grind it all, and they got started too late in the spring, so the millpond dried up. Now, everything runs much more smoothly. They plant only the corn they need for inventory, plus enough to supply seed for the following spring. They supplemented their 1919 gristmill with another from 1923. And Stowe found ways to improve the system, like adding temperature gauges to the gristmills to make sure the stones inside never get so hot that they cook out the corn’s nutrients and flavor. Together, the family figured out how to craft their grits and cornmeal within the rhythms of the seasons.

[Related: Get the recipe for Jim’s Favorite Cornmeal Bread] 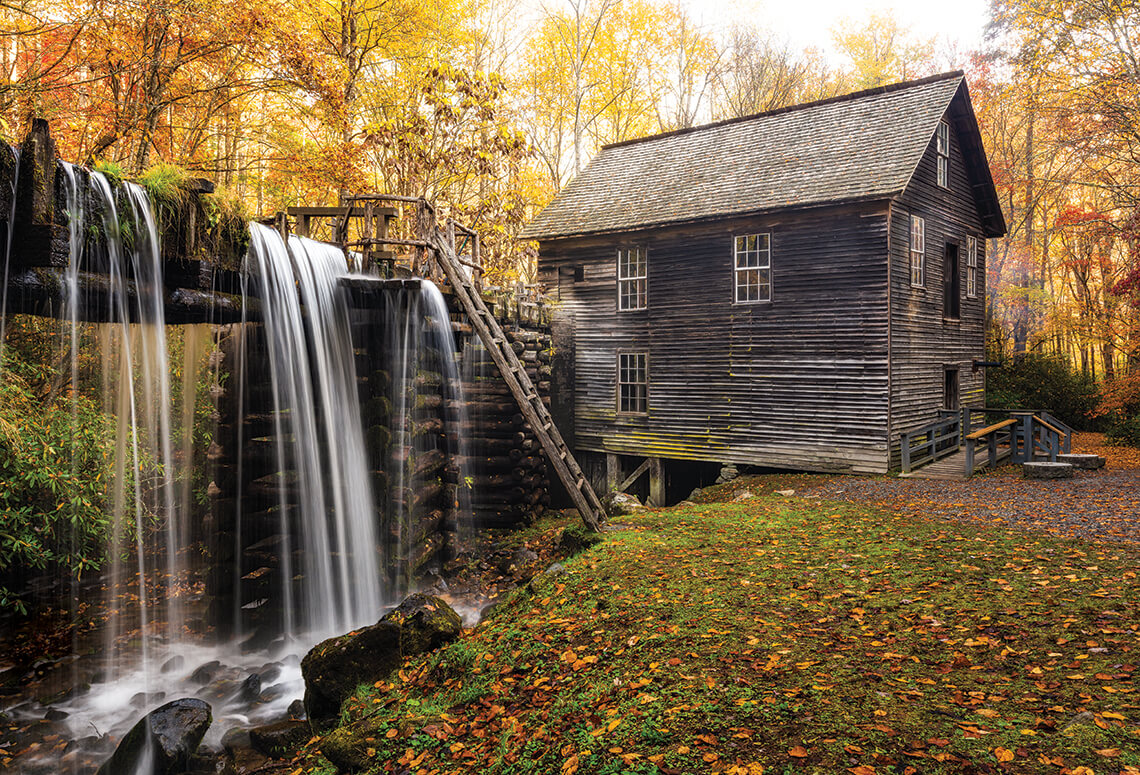 In Great Smoky Mountains National Park, water from Mingus Creek travels along a millrace to an elevated flume, then on to Mingus Mill’s turbine, which powers the millstones inside. photograph by Thomas Moors

The familiar image of an old-fashioned gristmill features a giant waterwheel, slowly turning to power the millstones inside. But in a wooded cove in Great Smoky Mountains National Park, water from Mingus Creek feeds a metal turbine instead. In 1886, nearly a century after John Jacob Mingus settled in the Oconaluftee Valley, his descendants built a modern mill on this site. It’s believed that Mingus may have operated an early corn mill on his namesake creek, and for more than 40 years, his family carried on that tradition, grinding corn and wheat for the farmers of Swain County. With plans underway for the creation of a national park — which would include the Mingus Mill tract — operations slowed and eventually ceased, and the National Park Service acquired the property from the Mingus-Floyd family in the 1930s. Today, from April through November, volunteers still grind corn into meal, preserving a piece of Southern Appalachian history. 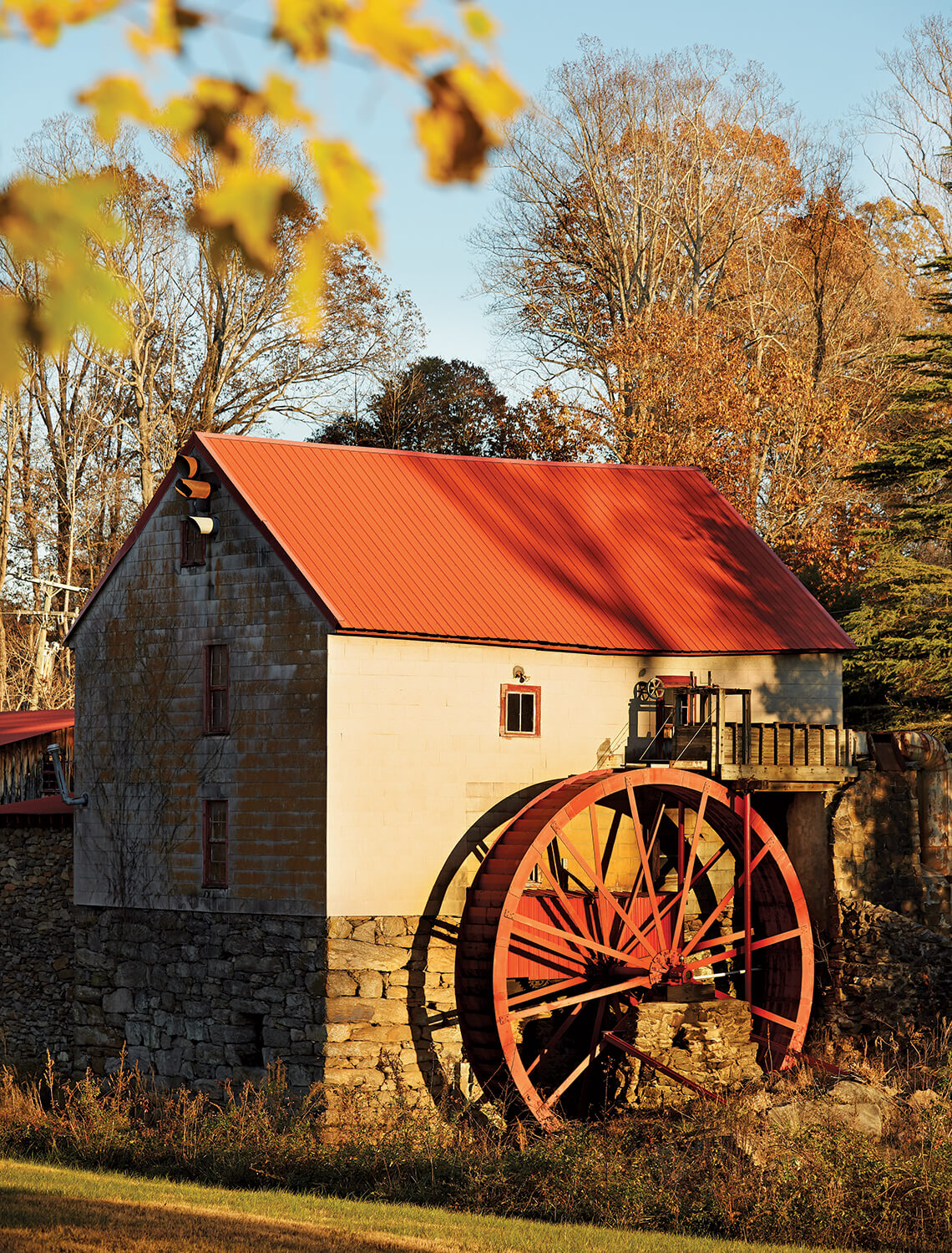 Amy and Darrell Klug (below) are the latest stewards of a 253-year-old legacy. The Old Mill of Guilford’s 24-foot red waterwheel is so iconic that it’s featured on the official seal of the Town of Oak Ridge. photographs by Stacey Van Berkel 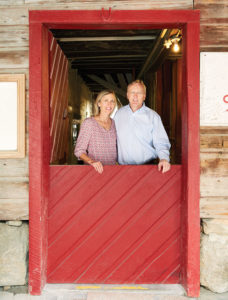 When Amy and Darrell Klug bought the venerable Old Mill of Guilford in 2008, they knew the big-picture history: In 1767, before America was a country, Daniel Dillon built a mill on Beaver Creek and began grinding grain for early settlers. According to legend, General Cornwallis seized the mill to feed British troops before the Battle of Guilford Courthouse. In 1818, the mill was moved, piece by piece, to its current location. What wasn’t part of the record were the “stories of the mill,” Amy says — memories from the community. So she invited locals to gather at the mill and share. They recalled baptisms in the pond across the street, grandfathers who picked up moonshine at the mill, farmers who chatted on the front porch while waiting for their corn and wheat to be ground. Today, the Klugs often see picnickers enjoying the property and photographers capturing the mill in every season. “Back in the old days, this was a meeting place,” Darrell says, “and it still is.” 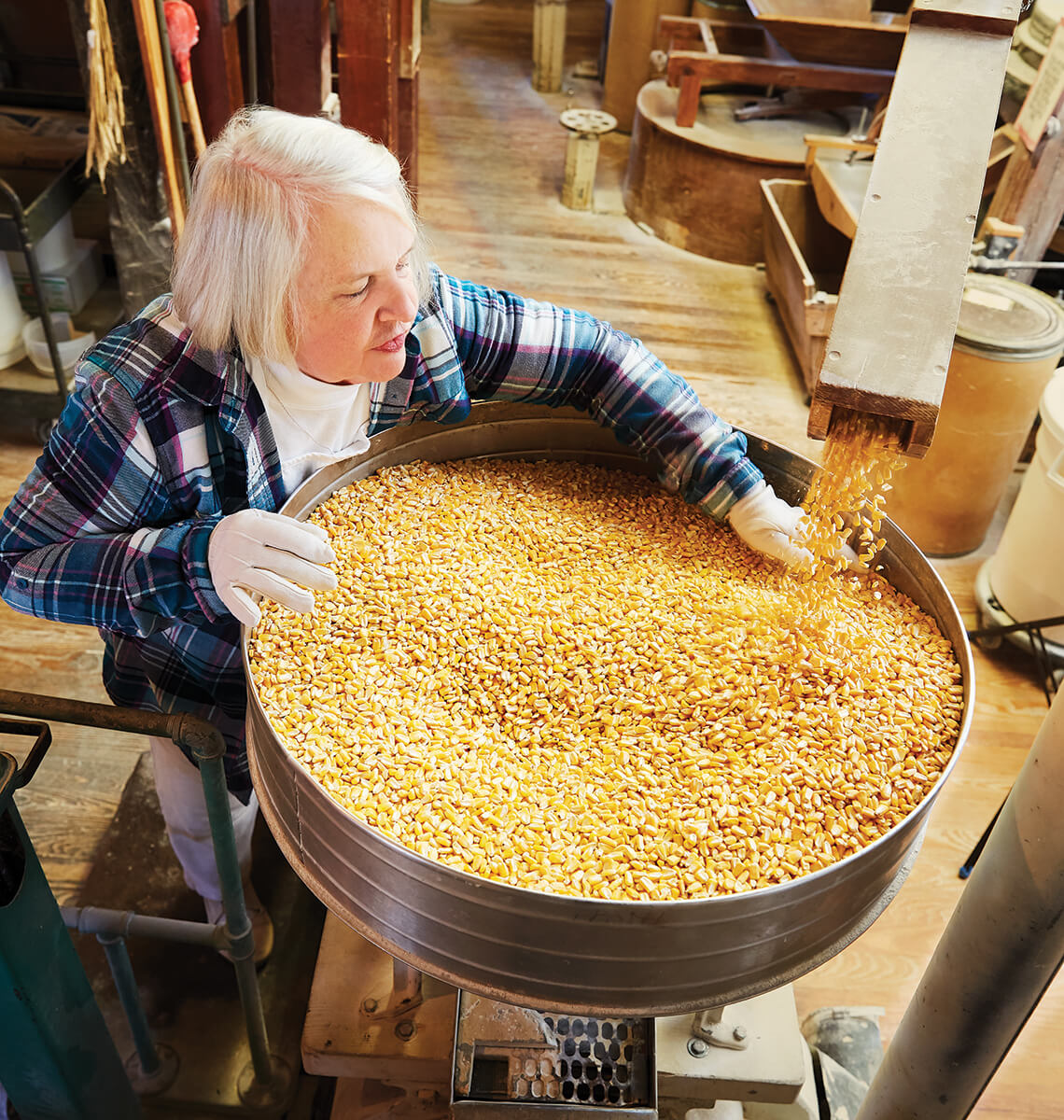 Annie Laura Perdue started working at the Old Mill of Guilford 30 years ago. For the past 13 years, she’s ground yellow and white corn from Surry County — as well as wheat — to make cornmeal, grits, and much more. photographs by Stacey Van Berkel 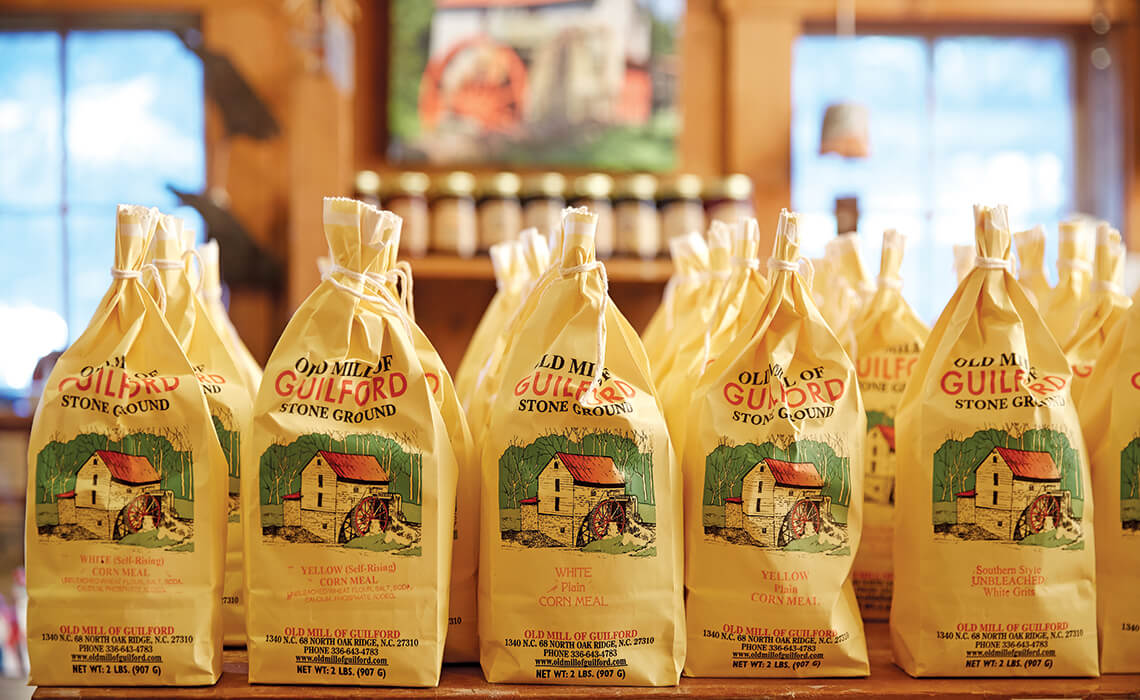 Community Calling The Klugs were brand-new to grinding grain when they bought the Old Mill more than a decade ago. “It was a leap of faith because we knew nothing about milling,” Amy says. “I had to learn little by little.” The previous owners, Charlie and Heidi Parnell, had set them up for success, developing recipes to expand the mill’s offerings from grits and flour to muffin, pancake, and scone mixes — more than 50 in all. They’d cultivated a group of locals who knew how to fix things and continue to help the Klugs today. Most important, they’d hired miller Annie Laura Perdue, who, the Klugs say, is the heart of the mill. During the early days of the Covid-19 pandemic, when Internet orders came flooding in from homebound bakers — as many as 150 a day — Perdue handwrote a note to every single one: “Thank you for supporting our small business.” 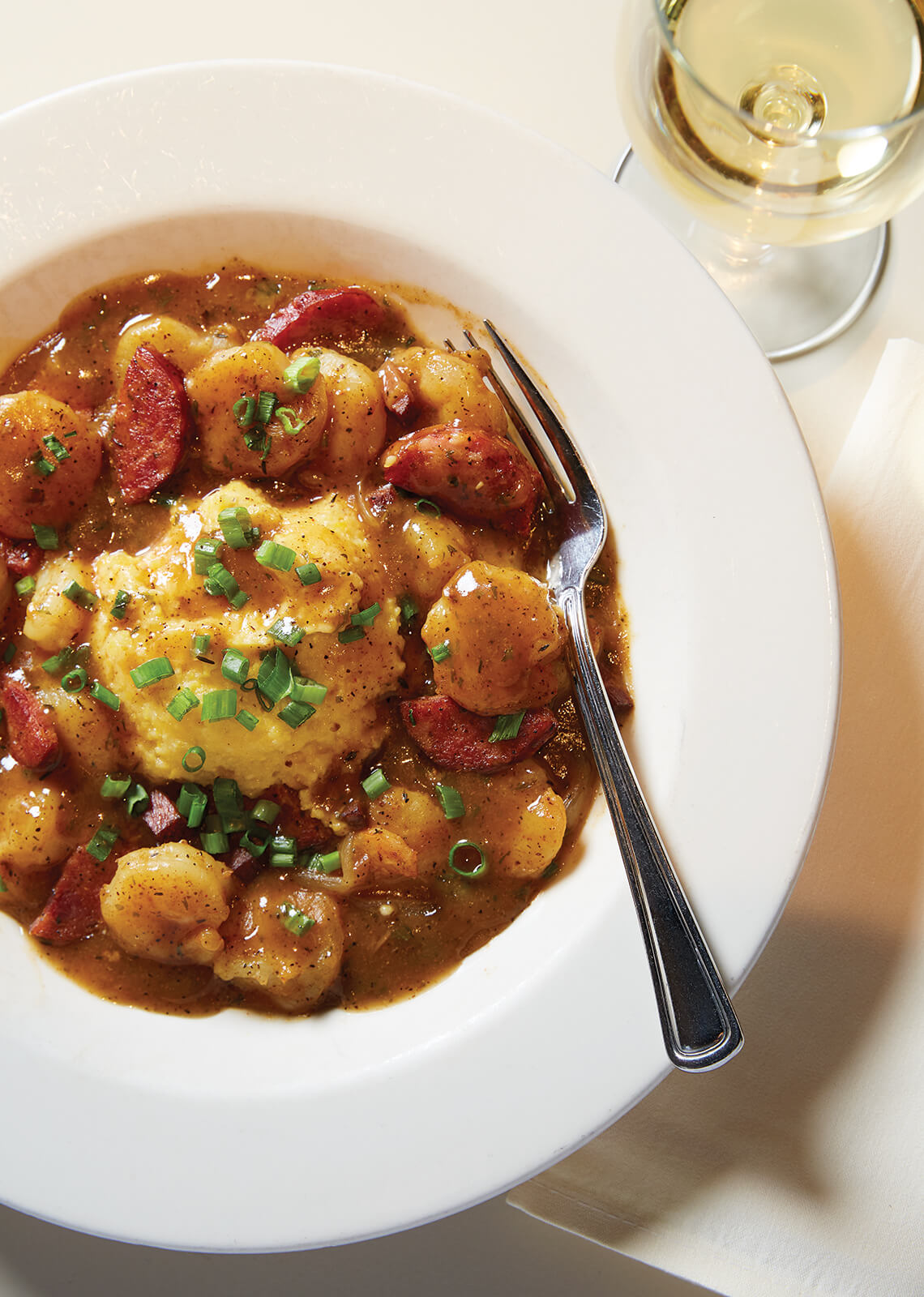 When you go to the trouble of getting really good ingredients, Nancy King Quaintance says, it doesn’t make sense to prepare them just one way. So the Old Mill of Guilford’s grits appear often on Lucky 32’s ever-evolving menu: in shrimp and grits, grit cakes, and more. photograph by Stacey Van Berkel

Growing up on a farm in Guilford County, Nancy King Quaintance ate a lot of grits. But when she and her husband, Dennis, opened Lucky 32 more than 30 years ago, Southern cuisine was not as widely known and celebrated as it is today. Instead, the Quaintances put together a New American menu inspired by their travels. But the perception of what Southern food is — and can be — was beginning to evolve, and the couple soon pivoted to a regional approach. “We know the South,” Nancy says. “That’s what we grew up with, what we’re good at cooking.” Her mother had always stocked the pantry with grits from the Old Mill of Guilford, so that’s where Lucky 32 sourced its grits, and still does. Nancy’s flavorful takes on local staples soon converted folks who thought there was no such thing as Piedmont cuisine. “There is,” she says. “You just need to look in your mama’s cookbook.” 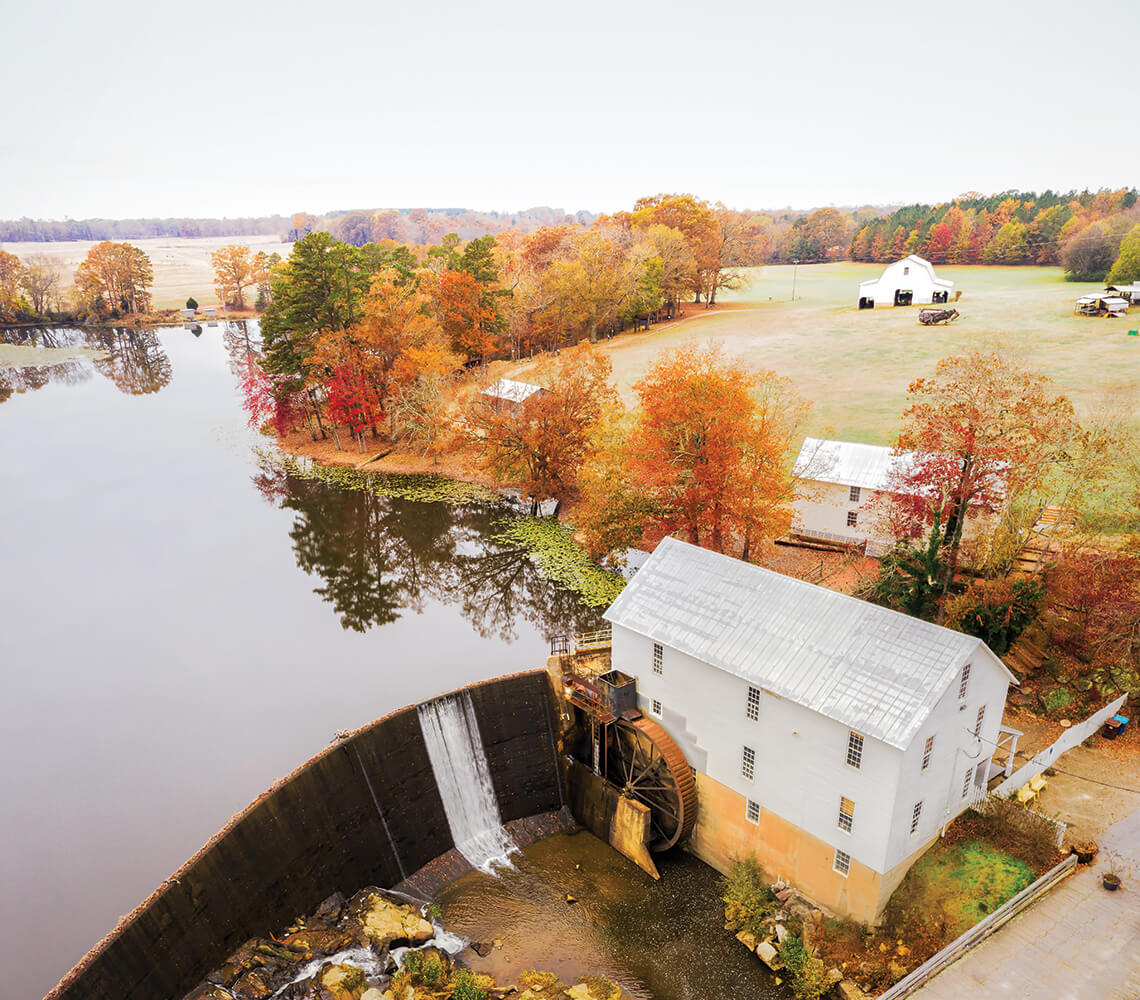 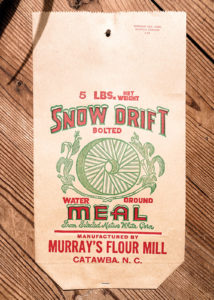 On the banks of Balls Creek, Murray’s Mill stands as the last operating water-powered gristmill in Catawba County. Three generations of the Murray family ground corn and wheat on this site, beginning with William Murray in 1883. In 1913, his son John built the mill that stands today, and in 1938, grandson Lloyd raised the dam six feet and traded the 22-foot waterwheel for a 28-foot model. The mill hummed along until Lloyd closed it in 1967, and it was later bought and restored by the Catawba County Historical Association. The group also maintains John Murray’s 1913 house, the 1890s Murray & Minges General Store — once run by John’s brother O.D. — the 1880s wheat house, and other buildings. Although the mill no longer draws long lines of farmers with grains in tow, a weekly farmers market, started earlier this year, carries on a long tradition of local crops bringing folks together. 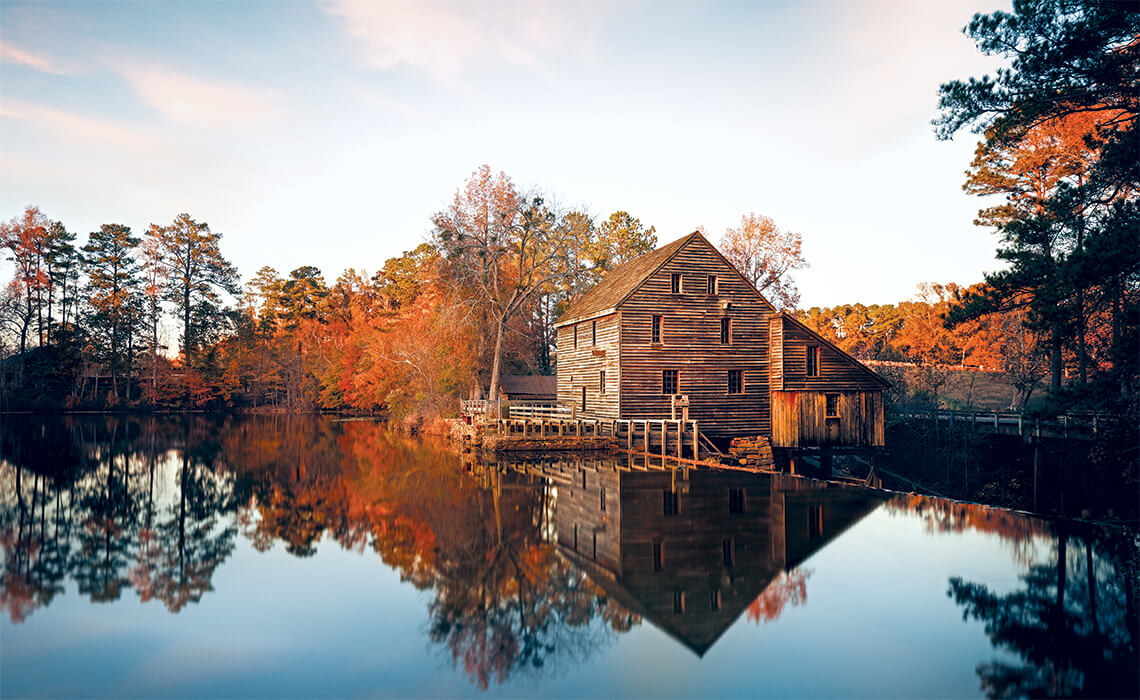 With no written records, details of the earliest days of Yates Mill have faded into the past. But for 200 years after Samuel Pearson built a water-powered gristmill on this property around 1756, the operation was a vital part of Wake County life. Neighbors got to know each other here, trading news and gossip while they waited for the millstones to turn their corn and wheat into meal and flour. But by the mid-20th century, demand had dwindled, and the mill shuttered in 1953. It remained mostly forgotten until 1989, when a nonprofit group, Yates Mill Associates (YMA), rallied to save it. The restoration was an enormous, painstaking task, but YMA’s members were propelled by their passion for the work.

When all was said and done, the mill reopened in 2006 as the centerpiece of Historic Yates Mill County Park, a 174-acre wildlife refuge that draws hikers, anglers, and picnickers — making the mill a gathering place once again.

Wood & Stone William Robbins, a woodworker by trade, first noticed Yates Mill as a student at NC State in the ’70s, and when he heard about YMA’s plans, he wanted to help. The group learned that the mill contained automated machinery patented by inventor Oliver Evans in 1790: Whereas the milling process had once required a team of workers, Evans’s system of elevators, conveyors, and belts could be operated by just two. Robbins spent five years poring over Evans’s book to replace missing parts and restore the mill with all vintage materials — down to the nails. “I can almost say that every board and nail in there, I’ve had some kind of relationship with,” Robbins says. So when the work was complete, he stayed on as miller. Every third weekend from March to November, he dons a period costume and grinds white and yellow corn into old-fashioned meal. 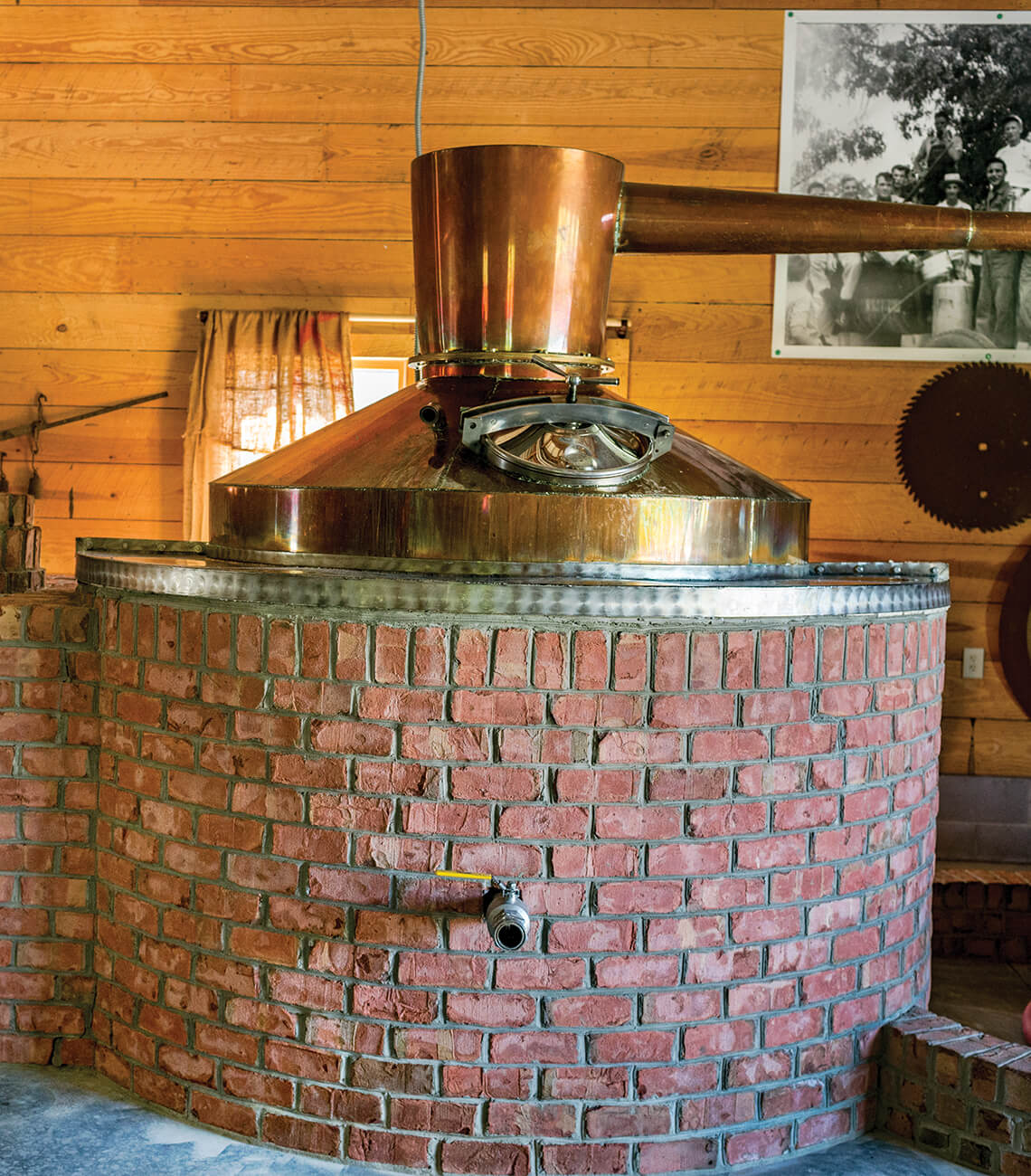 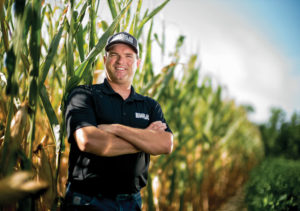 The story of corn in North Carolina would be incomplete without a nod to the resourceful farmers who converted their crop into an even more profitable commodity: moonshine. For Jeremy Norris, that regional lore is family history. Prior to Prohibition, his great-great-grandfather’s homemade whiskey earned a following, and demand continued even as the government cracked down. Norris’s grandfather Leonard A. Wood made his own moonshine, too, until he got busted by federal agents in the 1950s. But Wood passed on his knowledge — and his recipe — to Norris, who, with deep care and a devotion to authenticity, built the distillery that turned his family’s legacy into a legal business. Now, every bottle of Broadslab moonshine starts on Norris’s Johnston County farm, where white corn springs from his family’s soil.