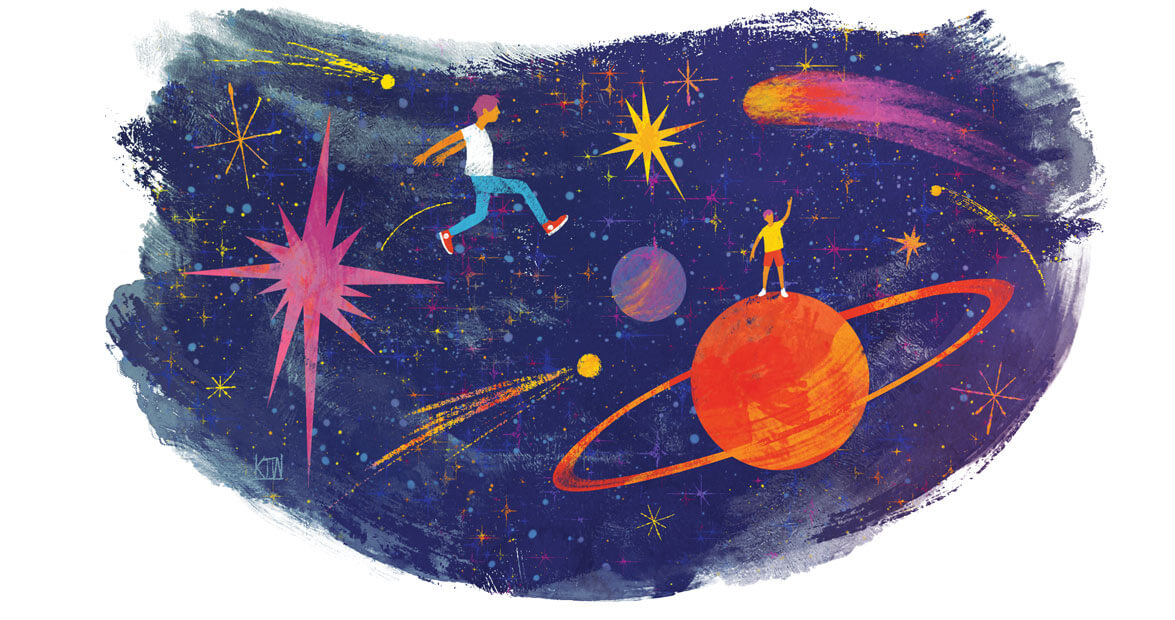 At some point last year, I made a grave miscalculation: I told my boys that in the distant future, the sun — our sun, the one in our sky — would burn out. I also told them that there is a supermassive black hole at the center of the Milky Way. This information was met with a lot of quiet blinking. I don’t remember what they’d asked about; I have no idea why I told them the truth. “What’s a black hole?” my little one, The Wee, asked. He’s in kindergarten.

“It’s a giant, all-powerful nothing,” I said. “It pulls everything in, even light. But don’t worry. It’s quite a long way away from here.”

“When the sun burns up,” asked The Toad, my third-grader, brave at the skate park but carrying a tender, easily wounded heart, “can we take all the souls off of Earth and bring them to Mars?”

I tried to explain that the sun would burn out long after all of us are gone, but the damage was done. Things grew so bad, in fact, that the boys, on vacation at Oak Island, were afraid of going to the beach after dinner to look at the night sky. They did not want to contemplate the infinite, or even the moon. “Gentlemen,” I told them, “this will not do.”

This is how we soon enough found ourselves in Chapel Hill, in a dome filled with stars.

Richard McColman’s title at Morehead Planetarium & Science Center is Fulldome Theater Manager, but really, he’s more of a mission specialist. “I’ve always had a fascination with astronomy and space science,” he tells me. “I was a little guy back during the early days of the space race, and then I got a telescope for Christmas in third grade — well, that was it.” McColman captains the “Carolina Skies” show at Morehead, which projects onto the planetarium dome the night sky as one might see it that very night. My kids are nervous, but there’s something soothing about the soft red glow of the house lights. I hold their hands, and then the red gives way to a dusky blue, and the first few stars pop out, and the boys say, “Coooool.” The Wee is especially delighted: “Are they real?” he asks.

McColman carries us smoothly through history and across the Piedmont winter sky. He tells us that Morehead and UNC can claim every astronaut from 1960 to 1975 as a graduate: the Mercury, Gemini, Apollo, and Skylab programs sent their flight crews here to learn celestial navigation. He points out constellations, telling us where to find Pegasus and Cassiopeia. My boys are rapt, unflinching even as the show shifts to the vastness of space, the sheer number of galaxies. Any tour of the heavens is disorienting, and I lean over to check on The Toad, he who is just starting to work through how very, very small we are. I want to know if he’s all right, but as the show carries us out of our solar system and into deep space, it is he who gives me a reassuring squeeze.

There are a lot of kids in the audience, and what strikes me most are the whispers I hear during the show: excitement mixed with disbelief, that same feeling of wonder that all of us feel looking up into a sky filled with stars. The planetarium doesn’t demystify any of it, not really. Maybe what it does instead is allow us to look right at something we’ll never fully understand, and find beauty in that very mystery.

Later, When I call McColman to thank him — my once-frightened kids now lie on the driveway, counting the stars in Orion’s belt — he laughs. He loves kids’ questions: “It can be a challenge to decipher and decode what they’re really asking you about,” he says.

I ask him to tell me about the planetarium, and he launches into an explanation of the control room and the projector and fiber optics and the bowels of the dome, and I realize: This thing is his spaceship. His energy is fierce and wonderful. He’s a man who never had to give up his earliest passions, a man who gets to talk almost every day about what he loves. Look up, he’s telling all of us. This is what the planetarium itself is telling us: Look up. Get some hold on where you are. That’s not fear you’re feeling, not really. It’s wonder.