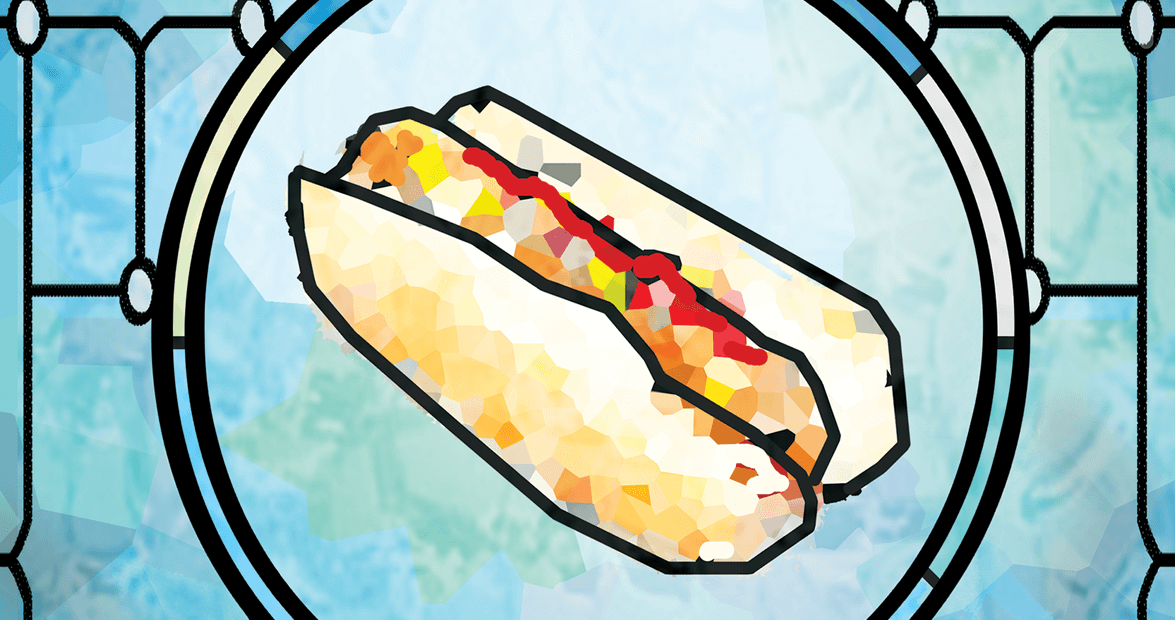 Editor’s note: This article originally appeared in the April 2013 issue.

They don’t call Greensboro’s Carraway United Methodist Church “The Hot Dog Church” for nothing. Oh sure, any church can fire up the grill and sell a few dogs to pad the benevolence fund, but this is different.

“We have the best hot dogs in Greensboro, no bones about it,” says 85-year-old Glenn Hendren, a faithful member of the small church since the late 1970s. “We believe it.”

Forgive Hendren for being so, well, frank about those righteous hot dogs he and his fellow parishioners sell at the church every Saturday during the spring and summer. When you’ve been doing it for more than two decades — selling as many as 2,376 hot dogs in a single day — and your community becomes so steeped in the tradition that you come to be known as The Hot Dog Church, well, that’s not just empty boasting. There’s meat in that bun.

The Saturday hot dog tradition began in the spring of 1992, initiated by the church’s Friendship Class to raise money for people within the church and elsewhere who had financial needs. Through the years, “we’ve used that money to do everything from buying hearing aids to putting tires on cars,” Hendren says. This past year, proceeds were used to help pay medical expenses of three church members who were fighting cancer.

The church sold about 40 dozen hot dogs the first week — not a bad start — and word quickly spread through the community about the little church selling hot dogs on 16th Street. By the end of the summer, sales had heated up to about 100 dozen a day.

Even as the church’s mostly elderly congregation gradually began to dwindle through the years, its hot dog operation continued to grow. People came from farther and farther away — from Reidsville; from Southern Pines; from Farmville, Virginia; and from the North Carolina coast. They began arriving increasingly earlier, and now some early birds show up around 7:30 a.m., eager to have a hot dog for breakfast. Takeout orders multiplied — one nearby mill sometimes orders 100 hot dogs to go for its workers — and those eating on the church grounds began staying longer to socialize, some of them as long as three hours.

And eventually came the nickname, The Hot Dog Church, a label its members enthusiastically embrace.

“They’re a hardworking group of people, and this is one of the ways they serve,” says the Rev. Karen Hudson, Carraway’s pastor. “But it’s not just the work that goes into it; it’s the heart that is behind it. This is really a labor of love for them. They’re tired by the end of the summer, but when spring comes back around, they’re ready to do it again.”

Yes, the chili is special

It’s hard to pinpoint exactly why Carraway’s hot dog lunches have been so successful. Some people think it’s the hot dogs themselves — bright red wieners boiled to perfection, wrapped in buns, steamed, and adorned with whatever fixin’s you want. At a dollar and a quarter per dog, the price is hard to beat. Chips, drinks, and desserts are available, too.

Others think the secret is the chili, which is indeed a secret.

C.L. Nabors, 78, has been making the chili for several years now. “We had a lady that cooked our chili for us, and she wouldn’t tell anyone what the recipe was,” he says. “Well, I got to helping her one time, and when she got ready to put the spices in the chili, she ran me out of the room.”

It wasn’t until a few years ago, when she moved to Florida, that she reluctantly agreed to share her secret recipe with Nabors — but only after making him promise not to divulge the secret spices, a promise he says he’s kept. He plans to pass the recipe down to his son, Kevin, who also helps out on hot dog Saturdays — but only if Kevin promises to keep the recipe a secret.

Nabors rises early on Saturday mornings to cook the chili, 80 pounds a week, which typically takes upward of three hours to cook. Many customers buy one-pound and five-pound containers of the secret topping to take home for their own cookouts.

There’s another key ingredient, and it’s not much of a secret — fellowship. With customers sitting at tables set up on the church grounds, the Saturday social almost takes on the feeling of a family reunion, with many of them lingering to chat with neighbors long after they’ve finished their hot dogs.

You see? They don’t call this place The Hot Dog Church for nothing. After more than 20 years and who knows how many thousands of hot dogs, the members have clearly mastered the recipe, and they serve it with unbridled relish.