It sounds something like a rattle, but maybe more like a clatter — heavier than the patter of dice, and there’s a sliding sound, too. If I’m not getting it quite right, it’s because it’s unique: There’s just nothing like the sound of mah-jongg tiles, or the sound of a bunch of women mixing them. It’s the sound of Grandma’s house, the sound of ladies chatting, the sound of community. It’s the sound of the South. Or, at least, the sound of North Carolina, to which an average of 281 people move every single day. Everyone has a different reason for coming here. But nearly all come looking for community.

So, meet the Cary Newcomers Club — or, anyhow, the part of the club that meets every Thursday at Bocci Trattoria and Pizzeria to have lunch and play mah-jongg: a dozen or so women of a certain age, mixing tiles, drinking martinis, and having a large, laughing time.

“A friend of mine said, ‘Brenda, join a newcomers club, you’ll be fine,’” Brenda Kay-Kucin says. She moved down a couple years ago from New Jersey, and yes, thank you, she’s well aware of Cary’s sobriquet as Containment Area for Relocated Yankees. In any case, she took her friend’s advice, found the club, and reached out. Now, she’s the president. 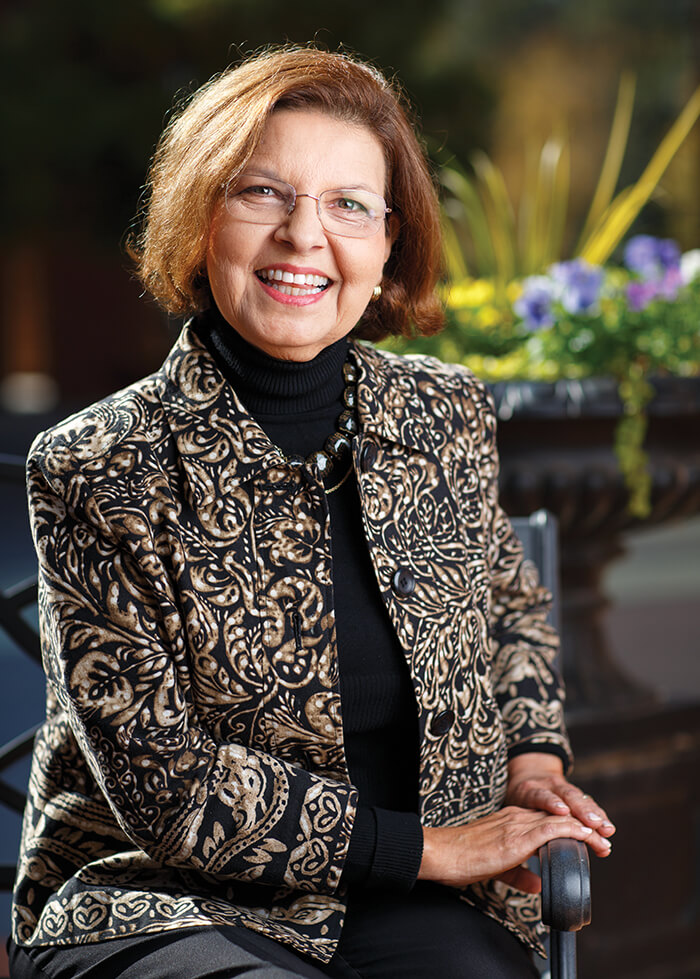 As president of the Cary Newcomers Club, Brenda Kay-Kucin is always trying to come up with new activities to keep members engaged. photograph by Jerry Wolford & Scott Muthersbaugh

We’re all familiar with the Welcome Wagon, which is mostly a way to acquaint new residents with local businesses. Most clubs for newcomers are something different: They’re about people, not business, and the club in Cary stands out even in that territory. “I’ve met people in the club who say they’ve been in the area for 10 years,” Brenda says. “I am familiar with groups that put a limit — four, five years — and then you graduate.”

Not this group. The Cary group still calls itself a newcomers club, but to give you a sense of how long people stay, at their first-Wednesday-of-the-month meetings, they have a special table set up.

“We also put on them this ridiculous and sweet little silk flower pin,” Brenda says. “So others will recognize them as a brand-new visitor to the club.” Once you have people hanging around so long that you have to identify newcomers to the newcomers club, you have to admit that you’re dealing with something special. Brenda says one of her goals as president is to organize more activities. There are already coffee groups and lunch-and-a-movie groups, of course, but why not try Mexican Train dominoes? Or an international group? Or a bowling group, a breakfast group, a dinner group, a wine group, a paper crafting group, or several book clubs to keep the 203 members busy.

Or, of course: mah-jongg. 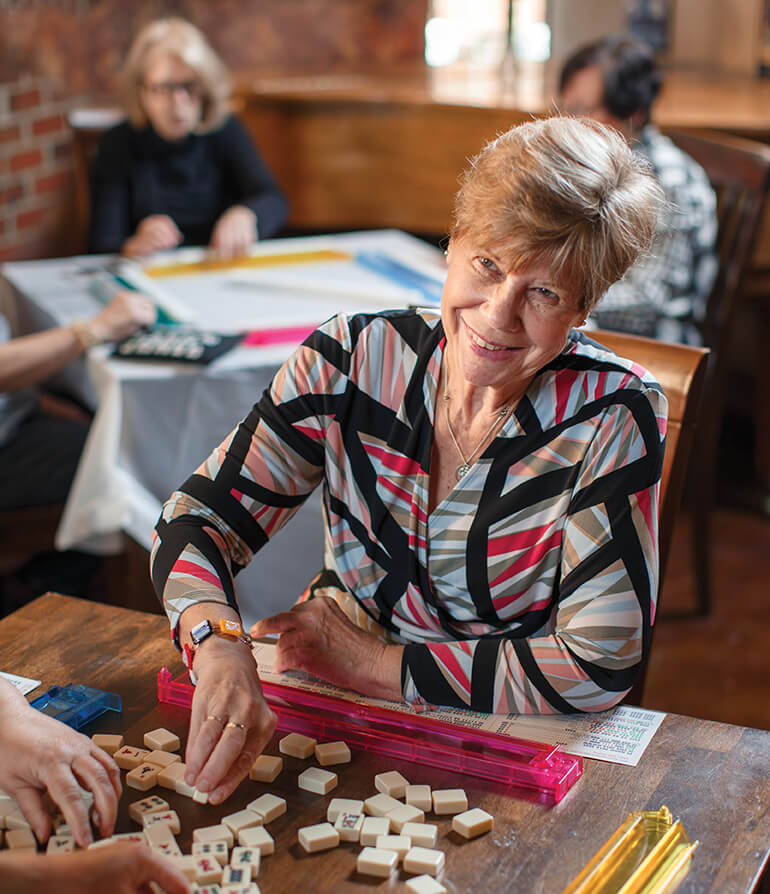 Jan Hedberg is the group leader for the Cary Newcomers Club’s weekly game of mah-jongg, where friendships are built one tile at a time. photograph by Jerry Wolford & Scott Muthersbaugh

Bocci’s is in Lochmere Pavilion, a cluster of brick-veneered stores, offices, and restaurants that looks like a faux town square floating on a lake of asphalt. It couldn’t possibly be more Cary. Inside is “a wonderful group of ladies, very warm, very giving — most of them,” one woman says, leaning forward conspiratorially. “Some of them deserve each other.” These are three tables full of women resembling my late Grandma Fanny, a flock whose migratory patterns now include a move southward for a husband’s late-career job change or a new grandchild. In any case, they know how to have fun.

“I’m in the lead; I had two [martinis],” declares Denise Soucy, 63, who describes herself as leader of the martini lunch brigade. She lives nearby in Durham, to which she moved from Florida when her son and daughter-in-law had a child. She introduces “my dear friend Karen.” The two met when Denise was working in an office in Raleigh and Karen came in as part of a property relocation team and offered her chocolate. “I was like, ‘Let us go in the conference room and talk.’” The two became fast friends; when Karen wanted to learn mah-jongg, Denise brought her to one of the lessons, and they’ve been coming ever since. They’re among several members who rejoin the club every year, just for the mah-jongg.

The women talk about grandchildren, about work, about the food, and even, occasionally, about the game they’re playing. But they’re here because they left behind the friends of a lifetime, searching in this group for those first-year-in-a-new-place friends of convenience. Instead, they found new friends of a lifetime, and so they remain — eating, drinking, talking, playing together the way friends do. After a year or so, they’re not really newcomers to Cary or to North Carolina anymore. Then again, when in life are we not, in some way, newcomers to every year, every month, every day?

“There are people who have a spouse die,” says mah-jongg group leader Jan Hedberg, 72. “So their life is different.”

And there, in a single comment, is the Cary Newcomers Club. Life is hard. Life is long. We move from job to job, family to family, place to place. And as we move, we seek fellow travelers: people who make our lives worthwhile. Everyone in this group had their own reasons for moving here, yet they all share at least one trait: They all moved here. To this part of North Carolina. They’re all newcomers in so many ways. And when, as a newcomer — to a state or to a state of mind — you find welcome, support, and comfort, why on earth would you leave?