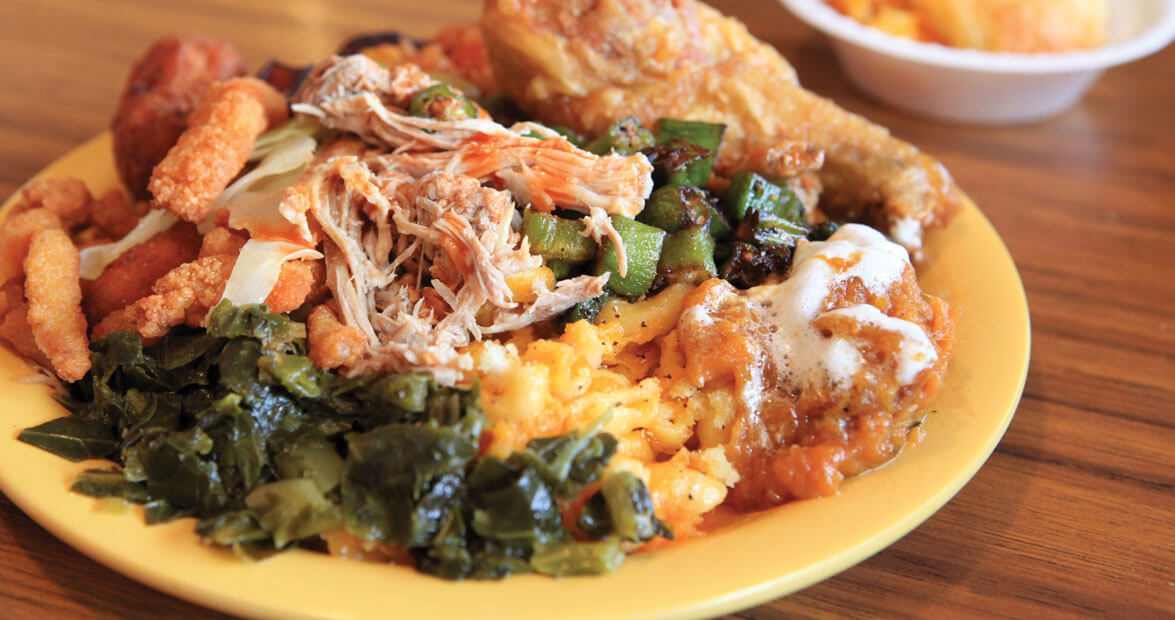 As soon as you hit the checkerboard floor in the foyer, one of a platoon of waitresses approaches — she probably calls you darlin’ or baby doll or sweetie — and in no time flat you join scores of other hungry folks at the tables and booths. Before you can warm your seat, she asks what you’ll have to drink. Then she points while giving you the lowdown: The buffet is that way. Plates are on the left. Help yourself. If you don’t see something in particular — like catfish nuggets or pork chops — just say so, darlin’, and Larry will cook it for you.

She means Larry Casey, who owns the place with his wife, Gena. Since opening the restaurant in 2005, they’ve taken this former home to a deli and a nightclub and turned it into an institution for people who crave the real thing in home-style cooking.

Oh, there’s another reason for those pig pictures. This place has pork, and plenty of it — barbecue, ribs, fatback, chitlins. Using relatives’ recipes, secret ingredients, and dreamt-up dishes, Casey’s gives customers a feast of what Larry calls “Southern soul food.”

“That’s what I grew up eating,” he says. “When I got into the business, I’d done everything from fast food to fine dining, but this is where my heart was — soul food and country cooking, home cooking.”

Each day brings a special, which means that in addition to everything else on the buffet, you get something more. Wednesday is meatloaf day, so count on meatloaf, barbecued pork chops, and chicken gizzards. Thursday, there’s baked spaghetti, Brunswick stew, and Larry’s sought-after squash casserole. Saturday, it’s hot wings, hamburger steak, and deviled crab. Sunday, you’ll find turkey and dressing, ham, roast beef, and barbecued chicken.

They used to have Pig Feet Friday, but it went over so well that pig feet grace the buffet every day.

That attracts James Josey, 80, who often shows up for Sunday dinner. With a line of folks standing in front of him, waiting their turn, Josey gnaws away, stacking spent hooves by his plate.

“It’s a country-food place,” he says. “They’ve got some of everything in there you’d want. I come here for the variety.”

For him, variety means pig feet and more pig feet.

When Yongdoker Thompson arrives for lunch at Casey’s — about twice a week — the waitress knows why she has come.

Thompson’s mother, Doris Brown of Long Island, New York, loves the catfish and collards so much that she wants to celebrate her upcoming 70th birthday at Casey’s.

This restaurant does that to people. Sure, the food has a lot to do with it, along with the personal attention. But there’s also the unpretentious atmosphere — aged pine paneling, roomy booths, 10-inch plastic plates, Kool-Aid (grape and cherry), and a wall of photos featuring customers’ children. Casey’s stocks the tables with molasses and vinegar, Texas Pete, and Larry’s barbecue sauce. Pig and chicken figurines stand atop the buffet glass. A shelf holds scores of old soft-drink bottles. One wall sports the framed cover of a 1960 Life magazine featuring Doris Day. It’s not unusual for someone to show up with home-grown cabbage and trade it out for a couple of meals.

“I’m not just an employee,” server Regina Watson says. “I’m as happy as I’ve ever been in my life. I guess making other people happy makes me happy.”

Watson and the others on the waitstaff wear white paper hats steadied by bobby pins, and blue T-shirts that carry the restaurant’s slogan: “Miss Ya Mamma’s Cookin’? Come Home to Casey’s!”

That works for Tommy Davis and his wife, Sharon, who have been eating at Casey’s since the place opened. They go every week, often twice a week and sometimes a third time with take-out.

“The food is good ol’ Southern country cooking,” Tommy Davis says between forkfuls. “It’s the beatin’est restaurant you’ve ever seen in your life.” 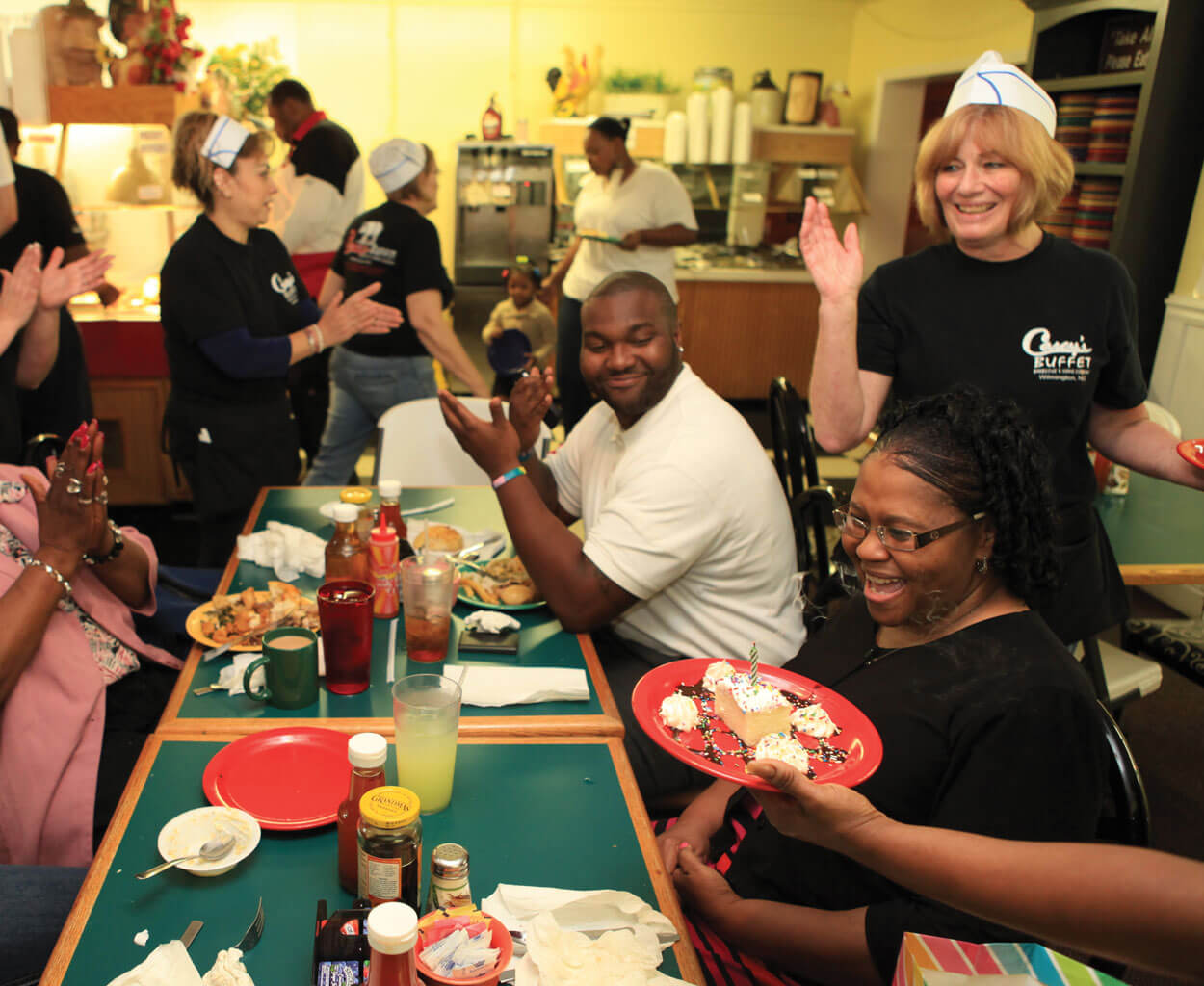 Families celebrate special occasions at Casey’s, because the caring and friendly waitstaff is no doubt part of the restaurant’s appeal. photograph by Brent Clark

Recipes from his dreams

Larry has a kitchen staff, but he does much of the cooking himself, typically working 14-hour days. And he personally seasons each dish.

“Everything I put out there has a story behind it,” he says. “Every recipe is a family recipe — it was my mother’s or grandmother’s or something I’ve tweaked a little bit. Some of the recipes, I went to sleep thinking about it, and I’d wake up and write it down and try it, and I’ve never changed it.”

He uses his mother’s recipe for meatloaf, “except I don’t make five pounds — I make 60.”

Typical compliments include, “You got any leftover meatloaf?” and “I think my grandma’s back there in the kitchen.”

Most of the time, you’ll find Gena Casey up by the register.

“Hey, darlin’,” she calls out when the next hungry soul shows up. “How you been?”

Every so often, Larry wanders into the dining room in his ball cap and an apron with a meat thermometer clipped to it. He and Gena catch a few minutes together, visiting with their diners, combing through the mail, or sharing the latest from their four children. They beam when they speak of the celebrities they’ve fed, such as singer Smokey Robinson and actors Linda Lavin and Darby Hinton. Larry loves to quote food-related lines from the likes of Benjamin Franklin: “The taste of the roast is determined by the handshake of the host.”

Gena says offering kindness to the customers is her first goal.

“That’s how I want to be treated,” she says. “It’s the old way. I love people. If it were not for them, I wouldn’t be here. They’re a blessing to us.”

That word comes up a lot with the Caseys.

“I grew up dirt-poor,” Larry says, “and it’s just a blessing to be able to live my dream. I know what it is to be hungry. My kids don’t, and it’s a blessing.”