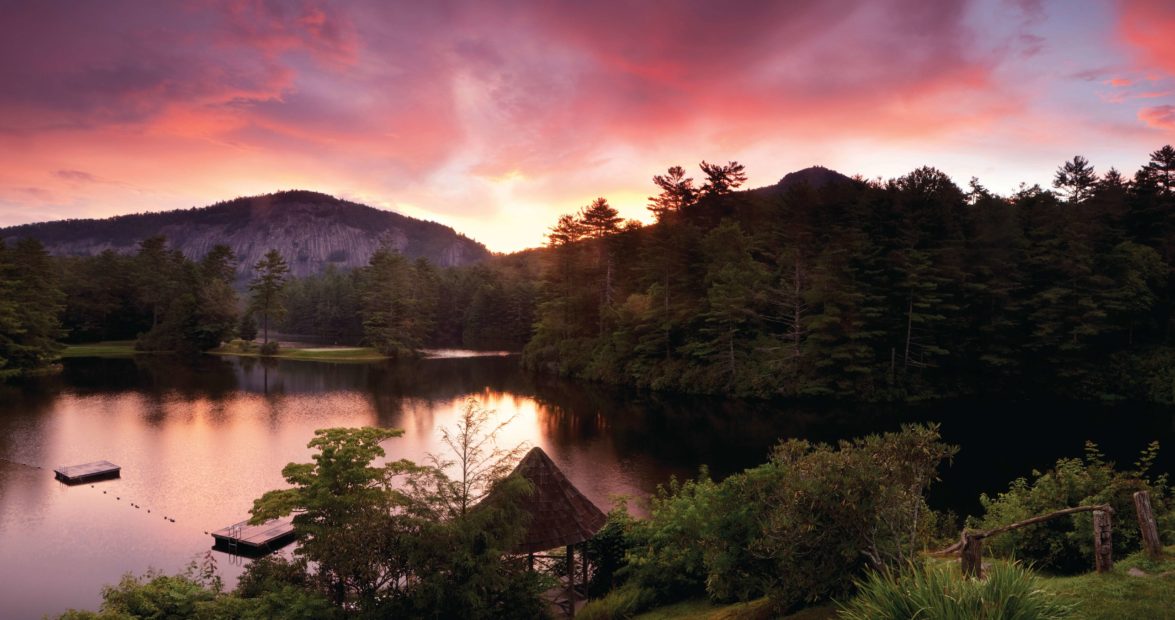 In a far southwestern corner of North Carolina, where South Carolina seems a whistle away, there’s a village sandwiched between mountains where waterfalls and Cherokee legends reign.

It’s as tiny as a dime, less than two miles square, with only two stoplights, one grocery store, and no street mailing addresses.

There’s no local government — no “they” as locals tell you. It’s all “we,” as in year-round residents and seasonal visitors working together to keep raw mountain beauty intact near the top of North Carolina’s world.

Their work has paid off.

In this village that sits 3,486 feet above anything along the coast, you first grasp the local love affair with nature at the intersection of N.C. Highway 107 and U.S. Highway 64, the village center known as the “Crossroads.”

There’s a gas station, a coffee shop, and a farmers market with peaches, sunflowers, strawberry-rhubarb spread, and a potbellied pig named B.B.

But behind a low stone wall, catty-corner from a coffee shop called Buck’s, you discover a big playground, winding paths, and a sculpture garden with this artistic statement: “It is here where we rest and dream.”

Resting here near sunset, on that low stone wall, you catch the slight smell of honeysuckle, the playful screams of a little girl, and the funny sight of three college students trying to scale a big pretzel knot of concrete and steel.

Then you catch two couples walking by, must be in their 80s. They’re hand in hand. They meander down a path, past two sculptures of big snails, into the heart of a park named after a little girl called Kara Leigh.

This all happens in minutes at dusk in the Village Green, the heart of this village.

They call it Cashiers.

Two donkeys, a family recipe, and a ghost

Like many towns in North Carolina, Cashiers has a pronunciation all its own.

It’s called CASH-urs. It has nothing to do with money — even though moneyed people come here in droves. The name comes from a mispronunciation of one of Wade Hampton’s bulls.

The Civil War general from South Carolina started vacationing here more than a century ago. Today, his former hunting lodge has been turned into an inn with 116 rooms and 17 guest cottages where families from across the Southeast have vacationed for generations.

The High Hampton Inn is in its 88th year, run by the McKee family. It’s a 1,400-acre spot, bracketed by two mountains — Rock Mountain and Chimneytop. Beauty exists at every turn.

The rooms have no phones, no TV, no air-conditioning. Meanwhile, there is a rustic Southern gentility you won’t find hardly anywhere else.

In the dining room, every night, men and boys older than 11 are required to wear a coat and tie. Families are everywhere.

On some nights, you can find kids sprawled on the floor, racing plywood horses on a frayed blanket with six lanes as a teenage bellhop rolls a die in a glass and yells, “Welcome to horse racing at High Hampton! This will be the last race! So empty your piggy banks!”

A young winner will pocket, maybe, $4.

Then, you’ll hear about a ghost. It’s a woman whose husband sold land to the former owners of the High Hampton decades ago. She hanged herself in grief, and she comes back in the spirit of an owl screeching at night.

But you’ll also hear about Ed and Fred, the inn’s two miniature donkeys.

Ed and Fred are the responsibility of James Connor. He’s worked at the High Hampton for 47 years.

He’s a stick of a man, with rangy forearms, a whiskered face, and the faded outline of a round tin of chewing tobacco lodged in the back pocket of his jeans.

He’s 66, a grandfather of five known as “Pa-Paw.” His dad, Claude, wielded a double-bit ax and worked a crosscut saw in a business that once fueled Cashiers’ economy: timber.

Tourism now drives Cashiers, and Connor is in the thick of it, leading Ed and Fred every week as they pull High Hampton’s youngest visitors in the back of a wagon.

Connor has never left the mountains. He has no intention to.

“You can’t take a country boy and put him in the city,” Connor says between spits of tobacco. “He’d go ape crazy out of the woods. You know, people tried to get me to Florida once, but I won’t go past the foothills.

J.R. Hayes feels the same way. He’s worked in High Hampton’s kitchen for 26 years, and every Sunday, he fries chicken that attracts people from far and wide.

He got the recipe from his grandmother. As a kid, he used to sit by the refrigerator in her small kitchen in Asheville and watch her work her culinary magic in a blue apron.

She would have flour up to her elbows; he would ask questions. When he got older, his grandmother gave him her recipe and told him, “Never tell nobody.”

And he hasn’t — not even Sean Ruddy, the chef at High Hampton.

The roots of beauty

In Cashiers, nature is the main event.

Sit at the base of Silver Run Falls, just south of the High Hampton, and you’ll be inside a coliseum of hardwoods and pines, surrounded by the constant swoosh of water. Nothing else.

Stand at the famous No. 8 — the hole at High Hampton that Golf Digest calls “one of America’s greatest” — and watch the sun rise over Rock Mountain and bathe the day’s first light onto a wall of granite that looks like a robot’s face with a jagged frown.

Or just listen to the engagement story of Chad Boswell. Four years ago, during an icy freeze in 20-degree weather, he took his fiancée, Holly Hale, up Chimneytop Mountain and asked her to marry him at the very peak.

“Isn’t it worth finishing?” he asked her.

They now have a son, Braden. He’ll be 2 in February. Chad has taken his son hiking and swimming in the Chattooga River — the very places he went as a kid.

Chad and his younger brother, Travis, operate The Orchard, a restaurant that serves entrees like Chimneytop Shrimp in an old house he and Travis renovated themselves.

Chad and Travis grew up in Cashiers; they’re mountain boys separated by a year. Chad is 40; Travis, 39. Their father ran the old Oakmont Lodge. Today, they run The Orchard in a place they’ll always call home.

Less than a mile away, in a two-story antiques shop, Skip Ryan feels the same way. Cashiers is home.

“This place is spiritually beautiful to me,” says Ryan, a longtime Cashiers resident who runs The Catbird Seat and Ryan & Company. “I’m not religious, but it does what makes me happy. It centers me, to see the trees and the green and the incomprehensible beauty.

“It’s the same thing you see in Ireland or England,” he says. “I go away to faraway places around the world, and I’m always so glad to come back here.”

Pore through local Cherokee folklore, and you’ll read about an immense bird named Tlanuwa that carried off dogs and small children, and a Cherokee witch known as Spearfinger who danced amid the clouds, brandishing a stone forefinger that could kill anyone with the slightest touch.

Both lived in Whiteside Mountain, home of the peregrine falcon and the highest sheer cliff in the eastern United States.

Yes, this land in Jackson County feels larger than life, full of myth. Its history, though, is far more grounded in working-class toil and grime.

In the 1830s, settlers named James McKinney and John Zachary settled in Cashiers, carved out a living along the Cherokee trails, and became farmers and carpenters, lumberjacks and gristmill operators.

They befriended the Cherokee, bartered eggs and deerskins for shoe leather and salt, had their children taught in one-room schoolhouses and rented rooms to the drovers who steered herds of cattle into South Carolina.

Today, six schoolhouses remain, as well as a two-story, eight-room farmhouse, built in the 1840s. In that farmhouse, written in pencil, is a piece of graffiti:

You’ll find that phrase, as faint as fog, beneath the eighth step of a 15-step staircase. Built by Mordecai Zachary, a self-taught carpenter, the house has become Cashiers’ premier historical site: the Zachary-Tolbert House Museum.

In search of mountain time

Between April and October, Cashiers swells from 233 people to a population of 25,000.

The allure is lengthy: cool summers; breathtaking autumns; 60 miles of golf fairways; second, third, even fourth family homes; and the serendipitous moments in and around the Village Green.

Locals and visitors alike protect this allure with the zeal of a missionary.

The reason is simply in the numbers: at least 10 hiking trails, 11 waterfalls, and 15 fly-fishing streams, full of
trout. Mountains are everywhere you look.

“The secret is out about the Cashiers-Highlands plateau, and people are moving here because of the natural beauty of the environment,” says Mark Jones, the morning manager of High Hampton and a Jackson County commissioner whose family has lived in the area for four generations.

“So, we take care of our visual landscape,” he says. “I mean, why ruin the goose that laid the golden egg?”

He loves this place. He’s 51, a local politician at the top of North Carolina’s world who gardens, gives away fresh vegetables, and goes on for days about High Hampton’s famous Sunny Silver Pie.

Jones is full of stories. Here’s one of his favorites:

It’s about a couple. They came to the High Hampton on their honeymoon. A half-century later, they came for their anniversary, and as they stood arm and arm, looking at the star-studded night sky from their bedroom window, the wife began to reminisce.

“Do you remember the very night, the very hour, looking at that beautiful moon and you began nibbling on my ear?” the woman asked her husband.

Suddenly, he jumped from bed.

“Where are you going?” the wife asked, incredulously.

“I need to get my teeth!” the husband shouted back.

That’s funny. But is it true?

“I don’t know,” Jones says, laughing. “But it sure sounds good.”