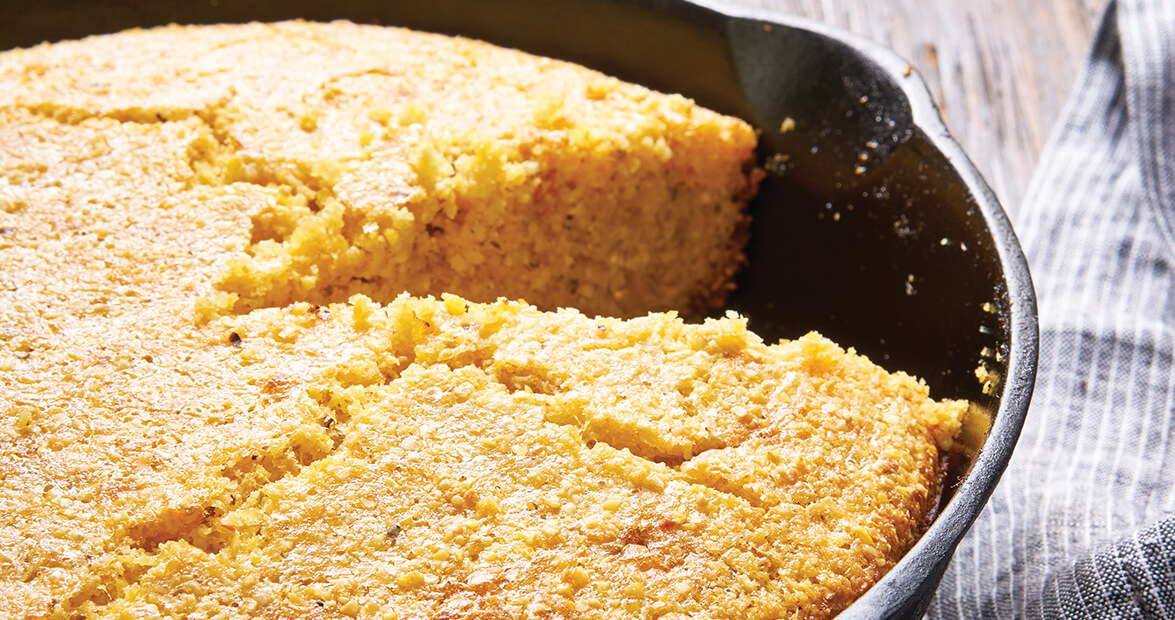 The ancient Egyptians outfitted tombs with objects thought useful and necessary to the departed in the afterlife. Hmmm. Perhaps I should ask my people to trundle me off to the sweet hereafter with my skillet by my side. You see, some people are born with a silver spoon in their mouths. I was born with a cast-iron skillet in my hand.

Cookbooks laud the culinary merits of cast-iron cooking, yet the power and persuasion of a good skillet is not what we make in it, but how using it makes us feel. If we’re lucky, our skillet is a hardy heirloom, passed down with pride and imbued with stories that tether us to family tradition. A well-seasoned cast-iron skillet sports an ebony gleam that comes only from regular, heartfelt use. It’s not a mirror, but you sure can see yourself in it.

Cast-iron skillets and cook pots were a given in my family’s kitchens, as certain and commonplace as knives, bowls, and aprons, but not all of those items were singled out as keepsakes. For something to be considered an heirloom, some sort of sentiment must develop. That happened for me when a beloved aunt died unexpectedly more than 30 years ago. I inherited her sapphire-and-diamond engagement ring and some of her cast-iron cookware. The ring is in a safe-deposit box, where I rarely see it. The pans are in my kitchen cabinets, where I use them almost daily.

Other family pieces bearing the hallmarks of Lodge, Griswold, and Wagner found their way into my heart over the years. My favorite is a nine-inch skillet that was handed down from my great-grandmother, named Lillie. To my knowledge, for upward of a century, nothing other than cornbread has ever been cooked in that one. (It is the plain truth that cornbread must be made in a cast-iron skillet.) Someday I will hand it to my daughter, named Lily.

I’ve also bought and refurbished old pieces from yard sales and flea markets, and invested in a few new items for my collection. Mercy, there’s a lot of it, around 60 pieces. If you figure that each piece weighs about six pounds, that’s around 360 pounds of sturdy iron. I doubt there was that much solid metal in my first car. And unlike my first car, my cast-iron cookware has never leaked oil, rusted through, or broken down. It works as well today as it ever did. Pound for pound, year after year, there’s nothing else like it.

Most antiques need coddling and fussing over, but not a trusty old skillet. Yes, it warrants reasonable care, but if it were as vulnerable and fragile as people fear, we wouldn’t have great-grandmother’s skillet at all, much less be able to restore and perpetuate its original glory and utility. A cast-iron skillet is repeatable history.

The only thing that can wreck a good skillet is neglect and ambivalence. It asks only to be used regularly and well. In exchange, it will persevere for generations and do what it’s meant to do: make meals and memories worth sharing.

If you aren’t the current keeper of a family skillet, and possession isn’t pending the reading of the will, then I am truly sorry about your lack of inheritance. But if you buy a good skillet to launch your own legacy (and make righteous cornbread), at least you’ll have something to leave your children. It’ll see you through in the here and now, and maybe in the great hereafter.