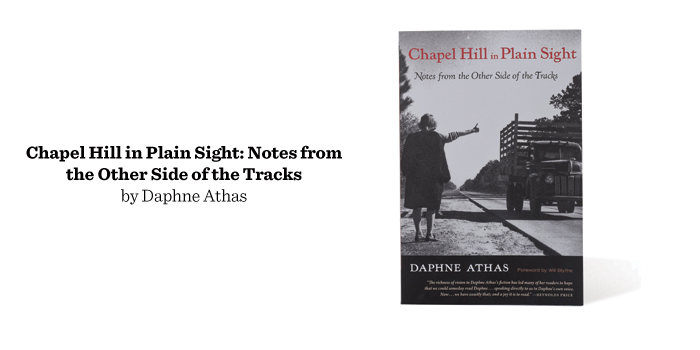 Daphne Athas moved to the Chapel Hill area in 1938. She saw GIs flood the University of North Carolina at Chapel Hill campus following World War II, and she hung out with Junius Scales, the only American ever imprisoned for being a member of the Communist Party. Her latest book, Chapel Hill in Plain Sight, captures intimate details of growing up in the “Athens of the South.”

The book is a collection of essays originally published separately, one as early as the 1950s and the latest in the 1990s. Athas divides the text into sections, roughly in chronological order, but each essay can stand alone.

In the chapter “Betty Smith Looks Homeward,” Athas talks about going to high school with Nancy and Mary, daughters of writer Betty Smith, who rocketed to fame overnight with her novel A Tree Grows in Brooklyn. In 1940, Smith and her family were as poor as everyone else in the aftermath of the Great Depression; they lived on credit at the grocery store and stayed in a “drab olive green” cottage.

Although Athas talks about her own idiosyncratic Greek father and the trials her family endured to finally have a house of their own, she never intrudes upon the text. She acts as a guide, showing the reader the forgotten history of Chapel Hill firsthand. As much a poet as a historian, Athas’s language is full of metaphor and Greek mythology; you don’t so much read Chapel Hill in Plain Sight as experience it.